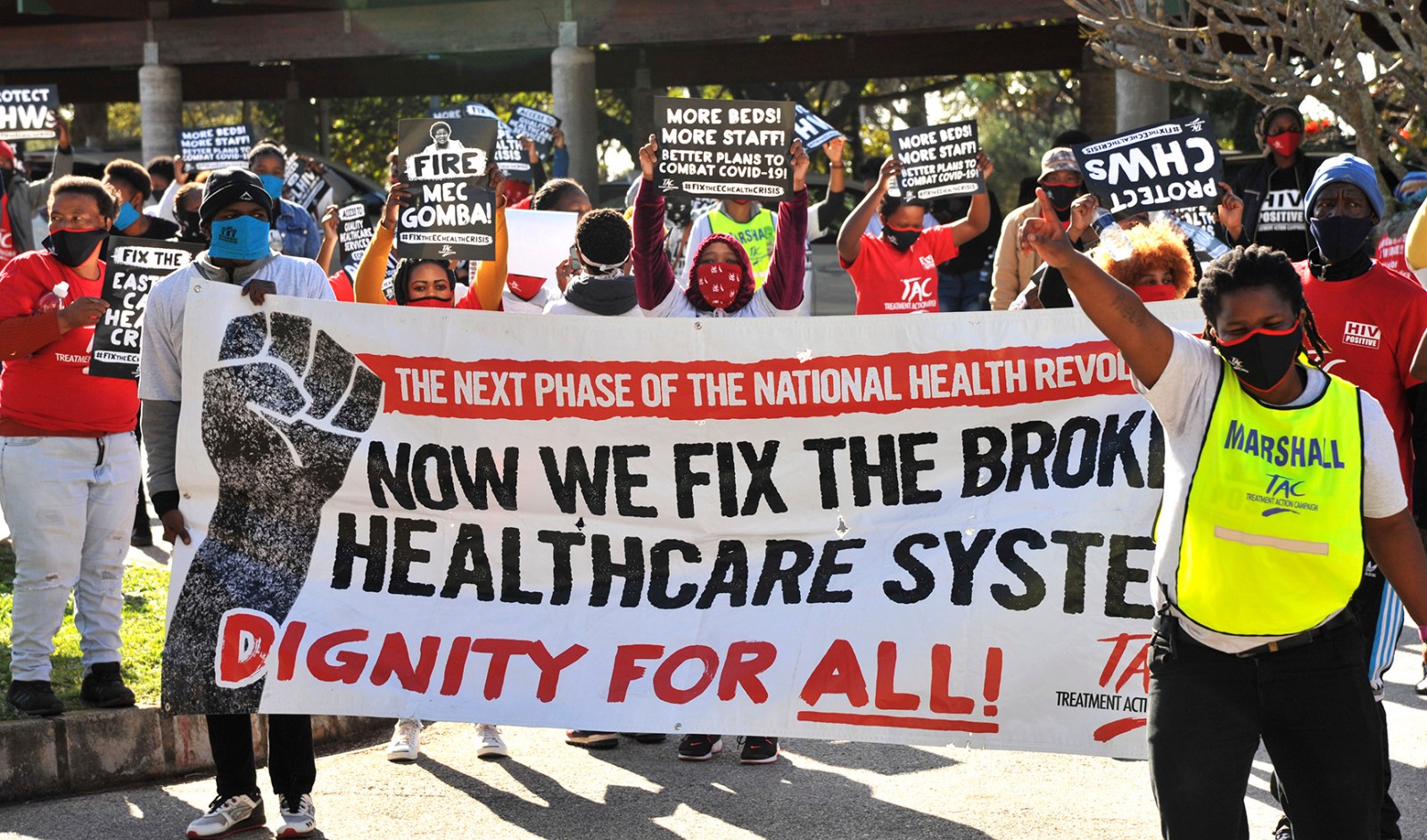 Archive photo: Members of the Treatment Action Campaign march to the offices of the Eastern Cape Department of Health in Port Elizabeth to protest against the lack of services at the metro’s clinics. (Photo: Mike Holmes)

In Nelson Mandela Bay alone, more than 1,700 patients with TB fell out of the clinic system during the national lockdown while health facilities focused on Covid-19. Almost all other services were relegated to the backburner.

As the Treatment Action Campaign (TAC) began its first round of oversight visits to clinics in Nelson Mandela Bay this week, the Eastern Cape health department admitted that clinics in the metro had lost contact with many of TB patients during lockdown.

TAC’s Anele Yawa said senior officials in the Eastern Cape health department admitted as much in a meeting this week.

“HIV and TB services were no longer a priority,” he said, explaining that the organisation had a meeting with the superintendent-general, Dr Thobile Mbengashe, the department’s director of clinical services, Dr Litha Matiwane, and other senior officials this week.

“One of the things that came out was that, when the coronavirus outbreak started, other services were no longer given any priority at our clinics,” said Yawa.

According to the latest health department figures, Nelson Mandela Bay had 22,245 cases of Covid-19.

“After the advent of Covid-19, HIV and other services were no longer a priority at our facilities. We look at the number of patients with TB – about 1,700 – that were lost to follow-up,” he said.

Yawa said many patients with HIV and TB have not received any medical care for months. “Nobody has cared about HIV and TB patients since April. They [the health department] only realised this after we stood up.

“We received reports that some people were only getting HIV treatment for five days. Others didn’t receive any medication and had to go to their support groups to ask if anybody was willing to share their pills,” he said.

He said they would visit more clinics next week.

“At Laetitia Bam clinic, patients are now allowed inside again and are being provided with chairs,” he said. Until the TAC intervened, patients were kept outside the gate where they had to wait for nurses to attend to them. The department claimed this was done as a way of “triaging” patients.

“While we were there, a man came to see us. He was authorised to collect medication for a person who was at work, but he had been coming there since early July without being helped because nurses said the patient’s file is missing.

“The facility does not know where the file is… why are they blaming the patient for this?” Yawa asked. “Fortunately we were there and the officials from the department of health agreed that he could bring the empty containers and have the script refilled,” Yawa said.

“We found similar problems at many clinics. Filing systems are not good and patients get blamed for missing files. They are on the receiving end of the health officials’ negligence. We have asked that a system be worked out on what must be done when a file goes missing,” he said.

He said two of the clinics in Despatch were too small for the number of people requiring assistance. “These clinics should have been extended a long time ago. In some instances, there are two nurses sharing a room. There is no patient confidentiality. Or in some cases, the one nurse and her patient must leave… then the waiting times get very long,” he said.

“At Lukhanyiso clinic, when you get inside you just see boxes. The exit doors are barricaded by chairs or boxes. If there is ever a fire at that clinic, everybody would have to use a single door. I don’t know why the department of labour does not visit these facilities to look at safety standards,” he said.

“At the Gustav Lamour clinic, I first thought it was a tuck shop. It is not a permanent structure and it has no fence.” He said there had been many break-ins at the clinic.

Yawa said it was clear to him that staff members had been warned the team was coming, but said their next series of visits would be unannounced.

“We’ve asked district management to write to their facility managers and request them not to lock patients out, or to turn them away. It is imperative that people have access to health services,” he said.

They also made a proposal that the TAC become part of a team set up to monitor clinics in the metro.

“There is no turning back. We are not asking for anything out of the ordinary. We just want to assert our right to healthcare,” he said.

Meanwhile, TAC activist from Soweto-on-Sea, Andiswa Rhode, said she was threatened by nurses for speaking out when she tried to collect her own HIV medication.

The chairperson of the Nelson Mandela Bay Health Forum, Thembisile Nogampula, said staff made “funny faces” at Rhode and were talking behind her back. “It was just because she took a stand and spoke out about the treatment patients are receiving, and how they have to share their ARVs,” she said.

A woman from Motherwell, who asked to remain anonymous after allegedly being threatened by nurses, also told of her “nightmare” at clinics in her area when her niece became ill and showed symptoms of a possible coronavirus infection. Nurses allegedly refused to help her, saying she was a “known defaulter”.

“My niece is only 15. She and her mom defaulted on their medication. Her mom wouldn’t take her to hospital because the last time she was there they told her, ‘you are going to die like your sister. You are a stupid girl’. They shouted at her in front of the people.”

She said the nurses told her to take the child to Dora Nginza Hospital. “At Dora Nginza, they diagnosed her with MDR-TB and Covid-19 and said I must take her home.

“Two or three days later I took her to the TB hospital. They wouldn’t take her. I had to call the helpline and senior officials from Bisho intervened. It was only then when they came running to get my niece.”

It was too late for her family, though, as by then all of them had been infected with Covid-19.

“Two days later I got sick. I couldn’t move or breathe or do anything. I phoned the corona people. We all tested positive. My mother is 75. She took a long time to recover,” she said.

The Eastern Cape department of health did not respond to a request for comment. DM/MC