This time the unpleasantness is underwritten by a sophisticated Twitter campaign, backed in turn by the atrophying muscle of Iqbal Survé’s Independent Media Group. The dog whistles have been turfed in favour of loudhailers, and as Survé’s bumbling sub-editors add to a dangerous dumpster fire of rhetoric, we nudge closer and closer to a crisis.

Between the years of 1905 and 1950, over five million men were coerced onto the gold mines of South Africa. Much like cattle or machinery parts, they travelled from the Sul do Save, Mozambique, packed onto the train depicted in Hugh Masekela’s Stimela:

They always cuss, and they curse the coal train,
The coal train that brought them to Johannesburg.
Whooo whooo!

Hundreds of thousands of these men failed to make it home alive. Those who did, found a place denuded by centuries of forced labour — the sting of the sipais’ switch had fed the bottomless mining pits in South Africa, and there was no one to fill the holes they left at home. As Charles van Onselen notes in The Night Trains, these contributions have been totally erased, despite the fact that at no point in the history of South African mining did the male population of Sol do Save make up anything less than the majority of its workforce.

For all their toil, and despite Helen Zille’s Twittered assertion that colonialism was “not ONLY negative”, there was zero quid pro quo.

“[T]he colonial administration gave almost nothing back to the Sul do Save by way of the development of education, health, infrastructure or welfare facilities in proportion to the taxes it harvested,” van Onselen writes. “In terms of ‘trickle-down’ economics the region was a disaster, and today, with seventy per cent of the rural population still living in abject poverty, the country as a whole is deemed by various United Nations agencies to be among the ten poorest on earth.”

In other words, Mozambicans were fucked six ways from Sunday.

Van Onselen’s vital historical revisionism reminds us how little we understand about the recent past. African nationalism — AKA the reification of the colonial borders set up by a bunch of psychos in Berlin 135 years ago — has been one of the major tragedies of the liberation era. National borders double as the territorial limits of a ruling party’s business operations, and woe betide anyone who threatens that sovereignty.

(The most vicious dressing down of any minister in Cyril Ramaphosa’s epically inept administration occurred earlier this week, when Finance Minister Tito Mboweni was crapped on after criticising the firing of Zambia’s central bank governor. How dare he flout the diplomatic conventions of mi casa es mi casa?)

But seriously, in a country with resources dwindling under the boot of Covid-19 lockdown authoritarianism, preceded by decades of economic austerity porn, government corruption, corporate chicanery and ANC infighting, why wouldn’t one hate one’s neighbour? Elevated sensibilities aside, people fleeing the extended nightmare in Zimbabwe, for instance — a situation aided and abetted by the South African appeasement of Zanu-PF brutality — walk into a country with limited opportunities. Their aspirations collide with the fact that the post-apartheid economy was supposed to benefit those who were oppressed in the previous regime, and it has done nothing of the sort. Inevitably, tragically, the violence bounces back — 21 South Africans were among the 62 deaths officially attributed to the xenophobic violence of 2008. No one wins in this game.

The pressures of Covid-19 were certain to re-up these never-dormant xenophobic sensibilities, but this time the rules are a little different. For one thing, there is a sophisticated Twitter campaign driven by the handle @uLerato_pillay, promoting the already infamous #PutSouthAfricaFirst hashtag and its close variations.

Finally, xenophobia in this country is getting its social media act together. Sample Tweet:

“People of Soweto don’t have affordable trains anymore. Foreigners distroyed [sic] and stole all the networks and cables. We are under siege. Zimbabweans specialise in this type of crime.”

Prasa owes @uLerato a bouquet of flowers and a box of After Eights.

As Jessica Bezuidenhout noted in these pages, the Centre for Analytics and Behavioural Change (CABC) has identified a “dangerously orchestrated narrative” that targets African immigrants, alleging that they steal South African jobs, drain the public health system of resources, and are rapists, murderers, etc. Most chillingly, CABC found that the campaign might be funded by as much as R1-million a month, placing it among the most significant 4IR investments in the country.

This genuinely scary bullshit dovetails with useful idiots like former Johannesburg mayor Herman Mashaba, whose big part of MO has been crafted around an intricate Make South Africa Great Again confection. Mashaba isn’t xenophobic, you understand — he just believes that South Africans in South Africa should come first. And while the business-bro-turned-politician cut his teeth in the DA and then formed his own ominous-sounding The People’s Dialogue Party, the ANC and its allies have dog-whistled their share of xenophobic commentary over the years too.

In 2015, King Goodwill Zwelithini, tenement lord of one-third of KZN, said in a speech to the Pongola community that, “We ask foreign nationals to pack their belongings and go back to their countries.” This helped kick off the last serious bout of violence, but there have been numerous other examples over the years.

Now, the opportunists and fools banking off the @uLerato Tweet storm are colliding with each other to explain their rationale. Which made last weekend’s Sunday Independent headline read like a punch in the nuts. “SA Under Foreign Control,” it screamed. The first sign that this was a pile of hot garbage was Mzilikazi Wa Afrika’s byline — Independent Media is a sort of a dumping ground for failed Sunday Times journalists. The second was that the carpet didn’t match the drapes, as it were: the lower paragraphs complicated what was, as is always the case in an Independent lead story, a garbled narrative.

“Bleak future on job front for many after lockdown as companies turn to exploiting foreign migrants,” it read. 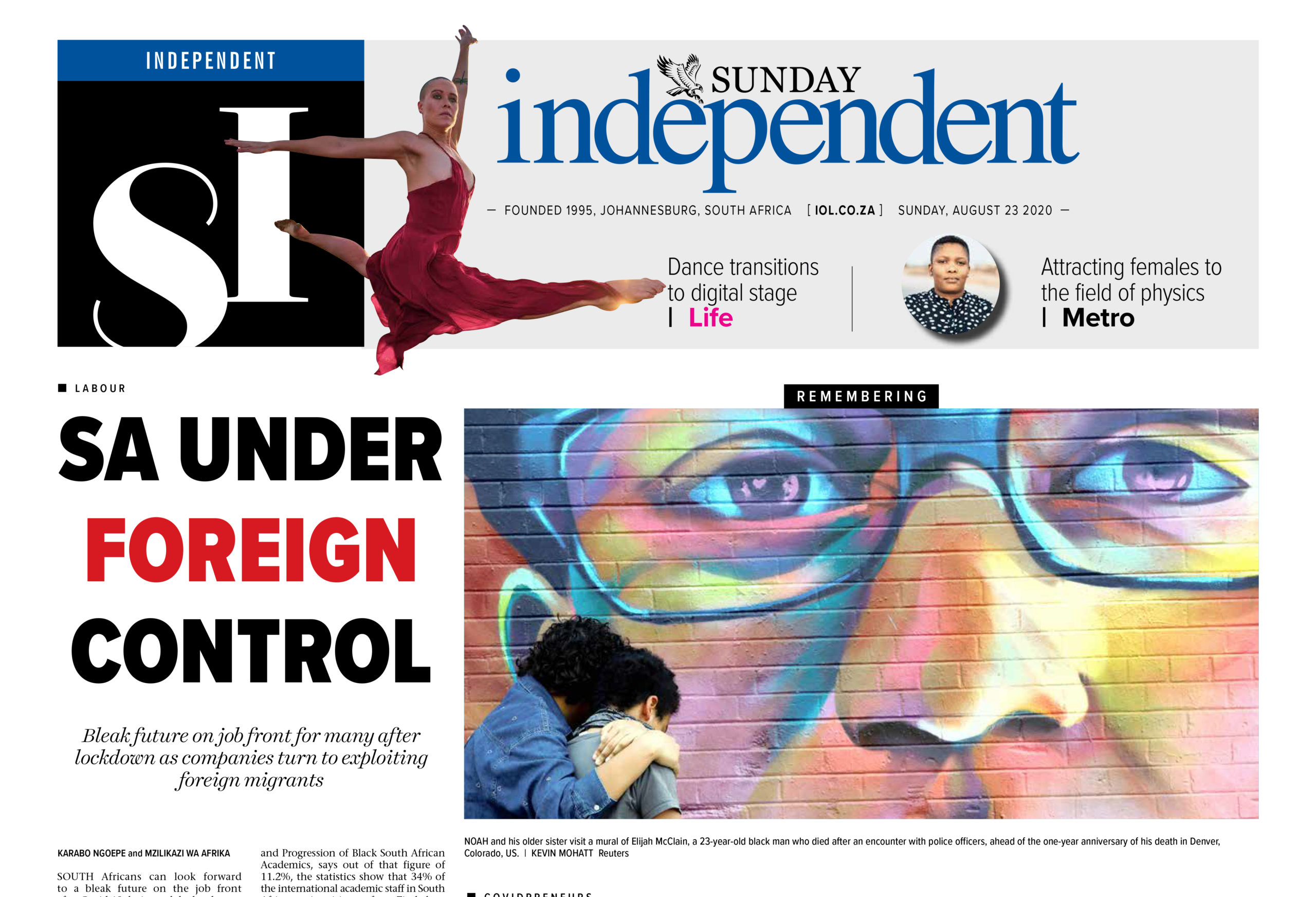 The Independent’s futurism is unlikely to put sangomas out of a job. But it’s worth noting that the ANC is in full control of the levers of political power in this country. What’s more, for the duration of the lockdown, they had corporate South Africa slavering to help mismanage their various funds, stimulus packages and charitable initiatives. There is no foreign control extant in South Africa — this is homegrown carnage, and we should be ashamed enough to own it.

The Sunday Independent’s version of scapegoating seems especially deliberate in the face of the fact that, while the ANC explodes into constellations of factional warfare, Iqbal Survé and his faux-media empire need to keep securing advertising and other support from the government. Survé has grifted the ANC for decades, and his “unicorn” consortium, Ayo Technology Solutions, famously secured R4.3-billion from the Public Investment Corporation in December 2017, after getting almost R1-billion in 2012 to purchase Independent Media, and failing to score a more than R7-billion PIC investment in April 2018 through the listing of Sagarmatha, which he valued at a ridiculous R50-billion. Given Surve’s strong connections to some sections of the ANC and the PIC’s long-term CEO Dan Matjila, Independent’s xenophobia is proudly painted green, black and gold.

As Iqbal’s vast money-suck veers into an abyss of its own making, it lurches left and right, trying to find a faction it can gel with. Last Sunday, it wormed its way into the hearts of the nationalists, who want the “foreigners” to burn so that there is someone to blame.

And so the careful historical framing is of no use any longer — as Mozambique, South Africa and Zimbabwe suffer paroxysms of chaos, these trends will only continue. There’ll always be grifters looking to exploit this fact.

The good doctor Survé, temporarily suspending his commitment to the Hippocratic oath, is a grand example of the type. This country isn’t under foreign control. He and his allies run it wholesale. DM