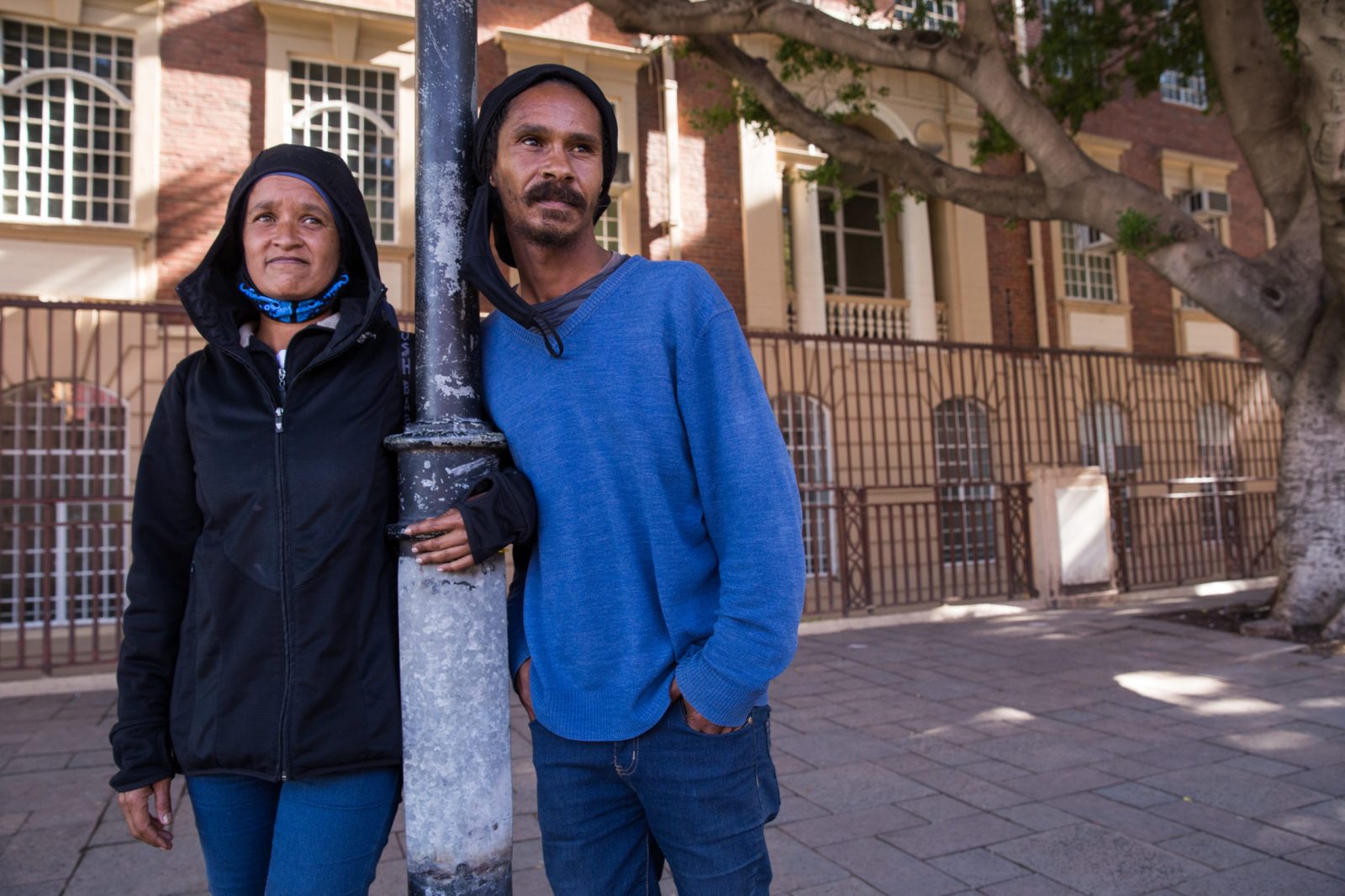 Fozia Kammies (left) and Anselm Sauls met at a night shelter and are now a couple. They sleep in the mountains in Cape Town. (Photo: Ashraf Hendricks)

There’s an increase in the numbers of homeless people refusing to go into shelters, according to the City of Cape Town. GroundUp talked to some people living on the streets to find out why.

On 6 August 2020, Zahid Badroodien, Cape Town’s Mayco Member for Community Services and Health, said in an interview with Lester Kiewit on KFM, that more homeless people are refusing social assistance and refusing to enter shelters.

He also said the City was conducting a review of its “Street People Policy”, to be completed by 10 October 2020. A wide range of people and organisations are to be consulted in the process, to be led by Melene Rossouw, executive director of the Women Lead movement and Lorenzo Davids, CEO of Community Chest.

Anselm Sauls and Fozia Kammies have been together for three years. They met at a night shelter in the northern suburbs. Sauls has been homeless for over a decade and Kammies about four years. They live on the slopes of Table Mountain.

Kammies was born and grew up in Plettenberg Bay. Both her parents were killed in a car crash. She was moved to Cape Town to stay with her aunt, but her aunt was addicted to tik and Kammies ran away, thinking her best chance of survival would be on the street.

Sauls used to work in Johannesburg, laying vinyl floors. He says he was involved in large projects such as Charlotte Maxeke Hospital, O.R Tambo International Airport, Helen Joseph Hospital and Chris Hani Baragwanath Hospital. An alcohol problem cost him his job and he ended up on the streets of Cape Town 10 years ago. The lockdown alcohol ban provided the break that he needed to quit alcohol, he says. He has since noticed a huge change in his health and has developed an insatiable love of coffee.

Both have spent time in a few shelters, mostly run by the Haven, and met in the shelter which took Kammies in soon after she chose to live on the streets. She lived there for a year-and-a-half, but, say the couple, most shelters do not generally encourage long stays and people are encouraged to leave after three months. Kammies said that she “found peace” during that time.

Sauls says a person seeking entry to a shelter may have to wait outside the shelter in a queue for most of the day.

There is a severe shortage of shelter options for the city’s homeless. The number of beds available is far fewer than the homeless population, though a new shelter has opened housing for 96 people at an extension of the Culemborg Safe Space.

“Auntie Kar”, the name a homeless person we spoke to chooses to be called, says that she has stopped trying to get into shelters anymore. Now 59, she was born in Salt River and has lived on the streets for her entire adult life, apart from short prison terms. She works as a car guard at the Buitenkant Street Fruit & Veg City.

Auntie Kar says she has been turned away, as recently as two months ago, for lack of space, even when directed towards shelters by City officials. She says if there was space, she would stay in a shelter, though she has found that shelters “rob you of your rights”. The street-based people that are hired by the shelters to hand out donations and perform administrative rights are “bossy”, and will often “help themselves first”, she says.

Sauls and Kammies have used the Culemborg Safe Space in pre-Covid-19 times. At that time, people living under the bridge at Culemborg were provided with a wooden pallet on which to sleep. The space offered them some protection from the elements. Couples are permitted to sleep together, which was an advantage for Sauls and Kammies, because most shelters house men and women separately. Both were working on an Expanded Public Works Programme (EPWP) contract while they stayed there. People on a EPWP contract are expected to pay R1,500 of their R3,700 monthly salary to the shelter.

Kammies was badly affected by bites from fleas that she says had infested the space. Midway through the EPWP contract, the couple left to sleep outside.

Most of the social assistance that is openly available to homeless people is administered by organisations that work in the city centre, making it a natural point of convergence for those without homes.

For people who reject the rules of shelters, access to facilities to wash themselves and their clothes is offered at the Carpenter’s Shop in Roeland Street, and Straatwerk in the Bokaap. Other services offered to homeless people by the Hope Exchange include a drop-box that was developed as a response to HIV medications being stolen. Social workers and social auxiliary workers are available to provide psycho-social counselling if requested, and to assist homeless people with administrative tasks, like getting their identity documents, and registering for social grants.

But the number of social workers and social auxiliary workers is insufficient for the demands on their services. And homeless people closely associate City-linked social workers with police and law enforcement officials, who often treat homeless people as if they have no right to the city, GroundUp was told.

Sauls, Kammies and Auntie Kar say they appreciate the feeding programmes in the city. They speak highly of the Service Dining Room, whose morning coffee is a highlight for Sauls.

Sauls and Kammies say they would live in a shelter if they had a room of their own. “A bed, a key and a kassie”, in a building that they didn’t share with current substance abusers, says Sauls. The couple were set to be married at the civil court in the week that lockdown regulations were announced in March 2020. One day, they would like a marital home. DM