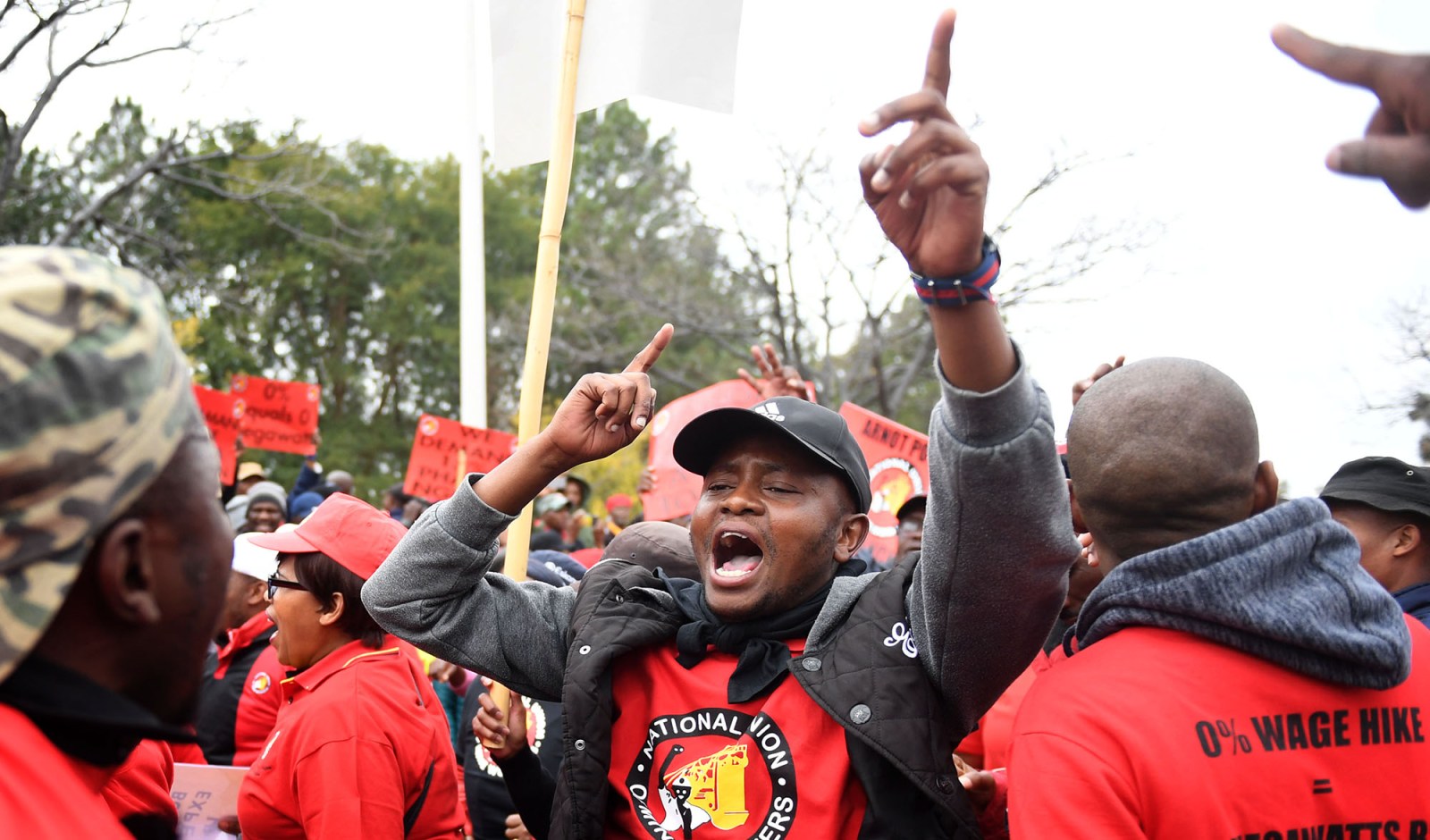 A section of the labour movement has declared a dispute over wage negotiations in the mining sector, while another is vexed by reports of widespread corruption in the state and plans to stage a strike. (Photo: Gallo Images / Netwerk24 / Deaan Vivier)

The National Union of Mineworkers might embark on a strike after wage talks with Kumba Iron Ore collapsed. Meanwhile, Cosatu has escalated its fight with the government over corruption as it plans to stage a general strike on 7 October. And the UIF Temporary Employer/Employee Relief Scheme (Ters) has halted all payments pending investigations from the auditor-general.

SA’s organised labour is picking a fight on several fronts and neither the private nor the public sector has been spared.

A section of the labour movement has declared a dispute over wage negotiations in the mining sector, while another is vexed by reports of widespread corruption in the state and plans to stage a strike.

Both events are unrelated, but they share a common feature: SA’s labour movement is seeing red.

In the mining sector, wage negotiations between mineworkers and Kumba Iron Ore management have deadlocked and a dispute has been declared at the Commission for Conciliation, Mediation and Arbitration (CCMA). This means that Kumba might face a strike at its mining operations, which is usually the next step after a dispute emerges.

The National Union of Mineworkers (NUM), which is the majority union at Kumba, said the company had agreed on a wage increase of 8% for the lowest paid-workers and 6.5% for the highest-paid workers. But both parties, which met at the CCMA on 20 August, disagreed over the sick leave policy.

“For the past donkey years, the company policy on sick leave provides workers with 120 days. To our dismay, in a round of negotiations, the company wants to do away with the benefit and condition of employment that workers are used to for all these years,” the NUM said in a statement.

The trade union said its attempts to change Kumba’s stance on the sick leave were not successful, which became the “only stumbling block to signing off the wage agreement”.

“NUM is ready to find an amicable solution to end the dispute. Attempts to pursue the company to consider conceding to our demands while we were still on the table failed; unfortunately, we reached a dispute without any better offer,” said Mpho Phakedi, NUM treasurer-general and chief negotiator at Kumba, which is owned by Anglo American.

Phakedi told Business Maverick that the CCMA commissioner had given NUM and Kumba 30 days to negotiate among themselves. If the dispute is still not resolved after this period, the matter would be rendered as “unresolved”, paving the way for Kumba workers to embark on a strike.

Kumba said it was continuing negotiations with NUM. “We trust that we will be able to reach an amicable solution soon, which will be in the best interest of both the employees and the company,” it said in an emailed statement.

Negotiations with the two other unions, the Association of Mineworkers and Construction Union (Amcu) and Solidarity, which are represented at Kumba’s operations, have been concluded, the company said.

Meanwhile, Cosatu, which has an alliance with the ANC, has escalated its fight with the government over corruption as it plans to stage a general strike on 7 October.

The planned Cosatu strike will focus on corruption, with the trade union asking President Cyril Ramaphosa to speed up prosecutions of corrupt individuals.

In recent weeks, there have been reports of widespread corruption in the government’s procurement of personal protective equipment (PPE) and other Covid-19-related goods, enriching politically well-connected individuals in the process.

Following a meeting of Cosatu’s central executive committee, the union said in a statement:

“The stealing of TERS [Temporary Employer/Employee Relief Scheme operated by the Unemployment Insurance Fund]  money by employers, price-fixing by food retailers and pharmaceutical companies, and the PPEs [sic] procurement corruption represent an assault against workers and the poor. Workers are dying from public and private sector corruption. Strikes remain an effective way of expressing anger and frustration.”

The Unemployment Insurance Fund’s (UIF) Ters, which is part of the government’s relief efforts during the Covid-19 pandemic, has been plagued by possible fraud and irregularities. Payments under Ters, which offers income relief to laid-off workers, have been halted pending an investigation by the auditor-general.

According to a report by Moneyweb, the investigation will cover Ters payments made to people who are deceased, imprisoned, or who are minors.

Business for SA (B4SA), a coalition of business organisations dealing with the Covid-19 pandemic, said on Wednesday that its representatives at the National Economic Development and Labour Council (Nedlac) had informed it of the suspension of payments and that it was understood that the auditor-general was looking into system integrity problems at the UIF.

B4SA said none of the delayed Ters payments on claims submitted by laid-off workers for July and August had been made. It said the UIF is “catching up on backlog payments going back as far as April”, which have also been halted.

“B4SA strongly supports the mitigation of fraud risks, and urges that criminal charges should be brought against all alleged perpetrators. However, the unilateral halting of all payments, and the very poor communication of the situation by the UIF leadership, is grossly unfair to all employees and their employers who have legitimate claims.

“That the UIF system is incapable of remedying the relatively small number of fraudulent claims without disadvantaging the millions of legitimate claimants is an indictment on the UIF system.” DM/BM