A student places a candle at the Claremont Post Office in Cape Town where a Year ago on the 24th August 2019 (UCT) University of Cape Town student Uyinene Mrwetyana was brutally raped and murdered. (Photo: Brenton Geach)

This is a summary of the trending, highest impact, and most active themes and narratives related to social cohesion and division in South African public-domain social media conversations on 25 August 2020.

Conversations about gender-based violence in South Africa continued to drive a high volume of traffic on social media on Tuesday. Several posts focused on femicide, while some discussed the motivations of offenders and appropriate responses by the criminal justice system.

This 24-hour cycle featured a tweet of a news article on femicide in South Africa: “Femicide in South Africa is five times higher than the Global average. Every three hours a woman is murdered, one in four women will be sexually assaulted and raped.” The full news article was posted behind a paywall, but the staggering statistics sparked 800 retweets and comments and 400 likes.

Some users asked: “So what is the solution?” and “what will we do differently?” Many made suggestions on how to address this scourge, writing, “Get Armed. Take self defence classes” and “elect more women,” while others tagged government officials: “we need solutions and action from you guys.” 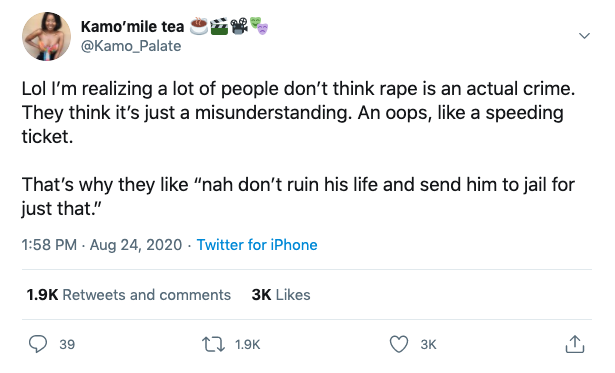 @sboshmafu authored another tweet about GBV: “Women in SA at 5:55am on a Monday: ‘We’re going to have a great week! Let’s go!’ The news at 6am: ‘A woman’s body has been found in a dumpster..”  The post was accompanied by a photo of a teary face. With only 170 retweets and comments and 160 likes, the disturbing post found limited traction online.

But @Refie_SA’s tweet about femicide received considerable attention, with 9,200 likes and 4,500 retweets: “In South Africa, a woman’s lifespan is whatever a man wants it to be.”

@Kay_Monqo posted a thread about President Cyril Ramaphosa’s promise to give abusers and sexual offenders harsher sentences, saying “those promises proved to be lies”. After abusers were reported to police, “the same perpetrators go out to kill them the very next day.”  The final post in the thread reads: “women we’re really on our own, we truly do live in a man’s world and no one gives a [expletive].” This post gained considerable traction with 3,700 likes and 2,500 retweets and comments by Wednesday.  Comments on the post largely agreed with the author.

@Kamo_Palate also tweeted about GBV offenders: “a lot of people don’t think rape is an actual crime. They think it’s just a misunderstanding.” This post garnered 3,000 likes and nearly 2,000 retweets and comments.

@AkeMarven authored a tweet about abusive men, reaching 6,300 likes and nearly 2,000 retweets and comments by Wednesday morning: “rich guys are abusive but we are not ready to discuss that.” In the comments, most users agreed with the author, writing “its true,” “men are abusive nje period,” and “men are abusive towards women who allow them to be abusive.”

@JoePompliano began a thread by explaining that just four years ago, Kanye West was allegedly $53-million in debt. With one negotiation, he managed to lift himself out of debt and is a billionaire today. The post was retweeted more than 7,000 times and liked more than 24,000 times, as the public viewed the story of how West met the CEO of Nike, Mark Parker, and began sketching design ideas for shoes.

Local entrepreneurs also received attention as the public retweeted their homegrown success stories. @KatlegoMaseng1 tweeted about Annita Dlamini from Verulam in Durban, who created a hot sauce that was now being sold at Spar stores and other retailers. The post has been retweeted more than 2,100 times and has received more than 6,000 likes. 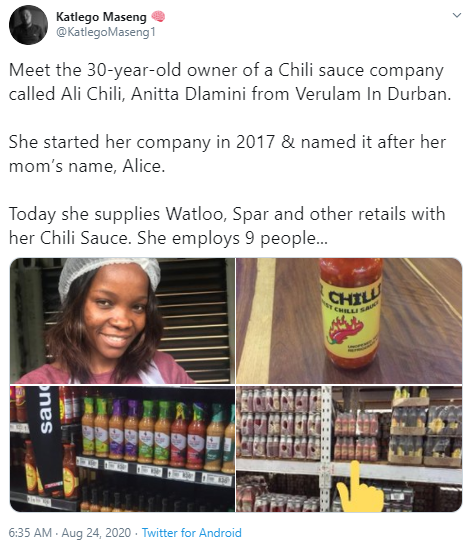 A 19-year-old student in Pretoria tweeted a video of a woman with braided hair, saying that she does box braids for R250. The video was well received with more than 15,000 views, and created an opportunity for people to view her product and access her contact details.

YouTube content creator @NalediMOfficial tweeted about another local entrepreneur, and encouraged people to support her because of her hard work and dedication to providing quality meals. The post was retweeted more than 700 times and received more than 1,500 likes. As the lockdown continues to impact small businesses, many owners are finding innovative ways of staying afloat. DM