Marikana massacre: The devastating impact of the narrat...

Marikana massacre: The devastating impact of the narrative painted by business, police and the state 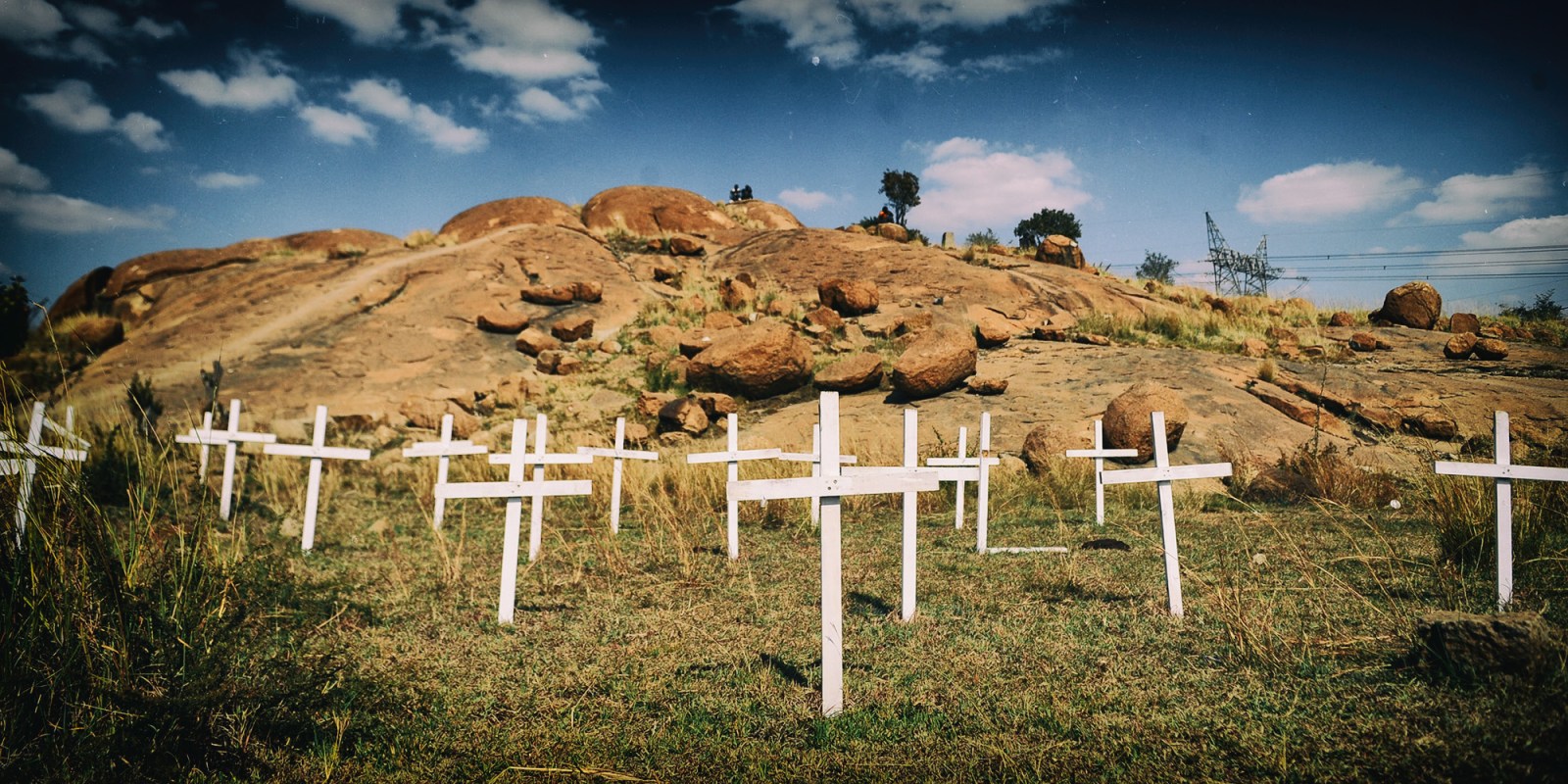 When the miners in Marikana were massacred and their ravaged community brutalised for months with a viciousness rarely seen before, a big part of the South African spirit of togetherness died. (Photo: EPA / STR)

Marikana is one of the deadliest manifestations of the collusion between business and the state in post-1994 South Africa and is the worst example of the decline in the state of South African public order policing.

Eight years after the Marikana massacre, the narrative painted by Lonmin’s management, police leadership and the state about the striking mineworkers continues to have a damaging impact on justice and healing for the victims and their families. The characterisation of the striking mineworkers as irrational, violent and unreasonable delegitimised their strike in 2012. This narrative continues to shape how the deadly force used by the police to end the strike is understood and (un)accounted for.

We have since learnt how Lonmin continuously refused to engage the striking mineworkers from as early as 9 August when the miners decided to down tools to demand a wage increase and better living conditions. In the vacuum created by this refusal to engage, the police became a buffer between the striking employees and their employer, which ultimately culminated in the events of 16 August.

Each year in August many rightly express their outrage and disappointment at the government’s failure to meaningfully make things right with the victims and families. Such public pressure should continue until meaningful change is brought. To date, it has resulted in the prosecution of nine police officers who appeared in court for the first time on 15 March 2018.

While some call for justice, others blame the miners for what happened. Much of the blame hinges on the violence that took place prior to 16 August. Many have also discredited the miners as militant and unreasonable and it is this characterisation that has also been used, intentionally and unintentionally, to excuse the violence with which they were met on 16 August.

That afternoon, the police used barbed wire to encircle the hill where the miners had been for the past few days. When the miners realised they were no longer safe, they decided to leave. They found that they were fenced in and the only way out was through a gap in the Tactical Response Team’s perimeter. The police fired tear gas and rubber bullets and the miners fled in panic.

We now know that in the moments that followed, the police fired 284 rounds of live ammunition at the miners within eight seconds. Seventeen miners died at that scene, now known as scene 1. We also know that the police pursued the fleeing miners into the surrounding rocky area and killed another 17 miners in execution-style, many of whom were shot with their hands raised in surrender, hiding or fleeing, at scene 2. At least another 78 of the miners were severely injured and have been scarred forever.

In the days after what they referred to as “D-Day”, the police insisted that they acted in self-defence, claiming that the armed miners had charged at them, leaving them with no option but to act. Former National Commissioner Riah Phiyega in a statement issued on 17 August said that the miners “stormed towards the police firing shots and wielding dangerous weapons. Police retreated systematically and were forced to utilise maximum force to defend themselves”.

Subsequently, 259 of the miners were arrested on charges ranging from public violence, illegal gathering, malicious damage to property, armed robbery, possession of dangerous weapons, and most perplexingly, murder and attempted murder. Although these charges have since been dropped, the narrative of the miners being violent and criminal went as far as holding them responsible for the deaths that were the direct result of police action. We later learned from the commission of inquiry that what happened on 16 August was the result of poor police planning, but also an arrangement between Lonmin management and senior police officials about how the strike needed to be brought to an end irrespective of the costs.

Until 16 August, the miners remained resolute: they had wanted to be addressed directly by their employer to enter into negotiations about their grievances. They were failed by the majority union (the National Union of Mineworkers — NUM) when it refused to enter into negotiations with Lonmin, claiming that they had already signed a two-year agreement with the mine. Even after the strike escalated, NUM failed to initiate communication between Lonmin and the miners.

Lonmin management and the police leadership also remained resolute: the strike constituted nothing more than criminality and needed to be addressed as such. Emails exchanged between Lonmin management and police leadership that were revealed during the commission of inquiry, illustrated that the miners were condemned and that there were never any plans to engage them on their demands.

Marikana is one of the deadliest manifestations of the collusion between business and the state in post-1994 South Africa and is the worst example of the decline in the state of South African public order policing. While the continued criticism of the miners has allowed the state to never fully atone for Marikana, police violence has continued unabated.

Lonmin simply refused and instead relied on the police as the official channel of communication. Lonmin and the police even used a hostage negotiator to communicate with the miners. They would go to the koppie, where the miners were and they would not even leave the nyala (armoured police vehicle) or turn off the engine in order to communicate effectively with the people they had been sent to speak to. The mineworkers had already been classified as too dangerous. They had been demonised and their grievances were delegitimised.

How the miners were viewed then and how they are viewed by many today was cemented by this deliberate criminalisation and demonisation. This was instrumental in justifying the police violence that followed. Very little has helped to shift this narrative. Neither the violence they encountered when they marched to NUM’s office on 10 August, nor the violence they encountered from the police on 13 August, has shifted how the miners were perceived then and how they continue to be perceived many years later.

Neither the structural violence and exploitation endured by the mineworkers for generations, nor the living conditions they were forced to endure as migrant workers on the platinum belt, have informed an understanding of the mineworkers’ perspective. This strike took place against a backdrop where Lonmin failed to develop the mining community and to deliver on its promise to build houses for its employees, despite a loan of $150-million from the World Bank’s International Finance Corporation to do so.

Marikana is one of the deadliest manifestations of the collusion between business and the state in post-1994 South Africa and is the worst example of the decline in the state of South African public order policing. While the continued criticism of the miners has allowed the state to never fully atone for Marikana, police violence has continued unabated.

According to Viewfinder analysis of IPID data, since 2012 the police have killed a person a day, on average, and have been reported for more than 1,000 torture complaints and more than 26,000 complaints of assault.

The police have a constitutional duty to protect. But at Marikana, they allowed themselves to be used as a mediator between an employer and its employees. They were also judge and executioner.

Police violence has continued to date because of the failure to heed lessons from Marikana and to demonstrate a willingness to meaningfully reform. The Minister of Police has still not released the Marikana Panel of Experts on Policing and Crowd Management report which was submitted in 2018. Why? We need justice for Marikana. Releasing the report and implementing its recommendations would be a step in the right direction. DM

Khuselwa Dyantyi is a candidate attorney at SERI and Thato Masiangoako is a researcher.