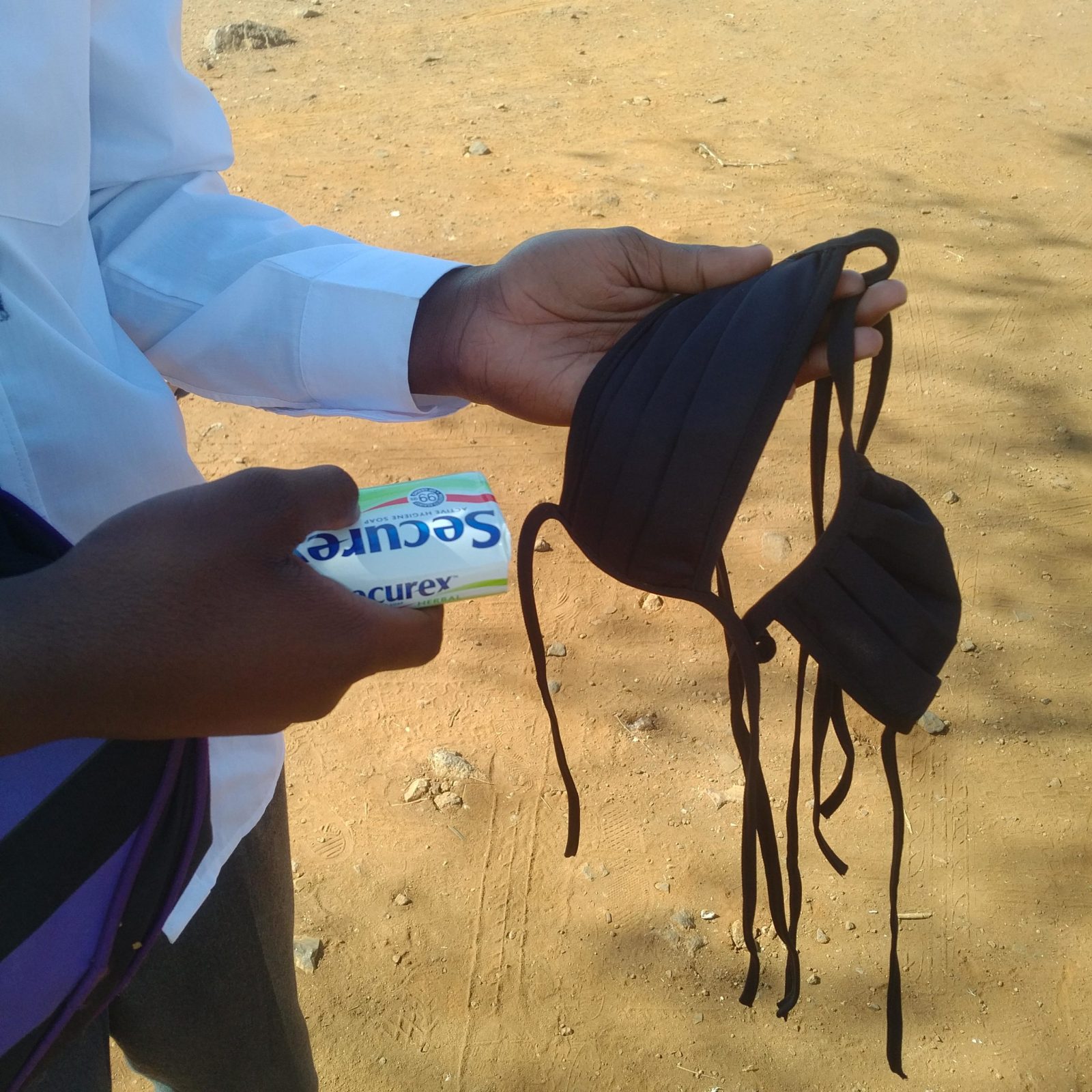 A pupil from Mapetla High with his two masks and bar of soap that he obtained from school before he was turned back. Photo: Bheki Simelane

A number of Soweto schools failed to get off to a flying start on Monday when pupils were meant to return to class.

After nearly a month of closure to manage rising Covid-19 infections, a number of Soweto schools in the Protea, Chiawelo and Dlamini areas failed to hit the ground running on Monday morning.

Schools around the country were due to resume classes on Monday following an extended shutdown due to the coronavirus pandemic and concerns raised by teachers and parents over the risk of infections at schools.

Almost a month ago, President Cyril Ramaphosa announced that schools would close from 27 July and reopen on 24 August. The expectation for many parents and pupils was that in-classroom learning would get underway immediately.

However, this was not the case at several schools that Daily Maverick visited on Monday.

Instead of being taught, learners were handed timetables and sent back home.

Many learners lamented the lost teaching time, saying they had expected to start schooling immediately.

“We expected to hit the road running, but when we got to school, we were given masks and soap and told to return to school on the dates specified in our timetables. I came prepared for learning because we have already lost a lot of time, but I was disappointed because our school was unprepared,” said a 15-year-old learner at Mavela High School.

“It’s so confusing. We phoned the school yesterday to enquire about our child’s attendance on Monday 24 August, and the school told us to send the child. Then this morning they phoned us to come and fetch the child,” said the parents of a Grade 1 boy at Mveledzandivho Primary School in Chiawelo, Soweto. The parents said they were lucky that both of them were on standby to go and fetch the child.

A spokesperson for the Gauteng  Department of Education, Steve Mabona, said the department had employed a rotational school attendance system to combat the spread of Covid-19 in schools.

“It must be noted that, for our schools to conform to Covid-19 protocols, we have opted for a rotational system and as such we would not have all learners at a school at a given moment, hence they are classified in different groups for necessary rotational attendance.”

Mabona would not say if this was the reason many pupils were turned away.

Unions have been apprehensive about schools reopening and have implored the department to provide personal protective equipment (PPE) and other measures to ensure the safety of learners and staff.

Mabona said the department had ensured that every school in the province received PPE.

But National Professional Teachers’ Organisation of South Africa (Naptosa) executive director Basil Manuel said that many schools were still without the necessary PPE.

Ronnie Malisa, 19, a learner at Ibhongo Secondary  School said: “I feel hard done by this. After all the time at home, we still cannot resume learning. This will certainly affect our results at the end of the year. Time is running out.” Malisa was also given a timetable and told to return to school on Wednesday.

Mercy Malaza, the mother of a 16-year-old who was also turned away from Ibhongo Secondary, said cancelling the school calendar year and dedicating the resources to other needs such as preparing PPE would have been a better option.

Said Malaga: “What good does it serve to send our children to school today and tomorrow they cannot go? It’s very frustrating. What I don’t understand is why are they pressing for a reopening as if Covid-19 is no longer with us. It’s extraordinary times, let’s prioritise lives first.”

A 13-year-old Grade 8 pupil from Vuwani Secondary in Chiawelo said his family had to make a tough choice between him coming to school or his mother using the cash to go to work. After he insisted he wanted to go to school so that he does not miss any further classes, his mother borrowed money from neighbours to get to work. The teenager commutes daily from Lawley in the south of Johannesburg. He normally uses trains, but because they are not running he has to use taxis, which are more expensive.

“I was not told to come to school. I was just concerned about my education and thought I should put on my uniform and head to school so that I can hear from the school itself. When I got to school we were given timetables and turned back,” he said.

The teenager’s timetable indicates that he is expected back at school on 31 August.

“I wasted our last money which could have helped my mother to work tomorrow,” he said.

It was the same at Reasoma High School. Pupils were given timetables and told to return home and come back to school on the dates on their timetables.

“We were turned back at the gates. We did not even get to class or see any teachers,” said a Grade 9 pupil.

“I’m now scared that I might have to repeat this whole year because there has been no progress. I assumed it would take a lot more if I want to get to tertiary, but at the current speed I might fail,” she said.

Asked about their preparedness for schools reopening Mabona said: “Among others, our preparation entailed reworking our schedules and timetables to adapt to the new normal and we are pleased with the plans. We just want to appeal to parents to support schools, educators and learners accordingly.”

The South African Democratic Teachers Union (Sadtu) provincial secretary, Tseliso Ledimo, said he was “unaware of the situation” but would investigate.

“It seemed many schools returned and tried to manage the system. But others had to turn away children because they had no way of dealing with the sheer numbers because they didn’t have communication systems to alert parents and children that only 50% should return [on Monday]. They did not know who exactly was to return,” said Manuel.

“We also know that many provinces have shortages of teachers, notwithstanding the spokesperson telling us that this matter had been dealt with,” Manuel said. He added that the department of education had failed to understand that even if only 50% of learners are at school, 100% of teaching capacity is still needed, because the classes have been made smaller.

“By assuming that because the school is running at 50% there are teachers that are spare is not true; it shows you that there is no understanding of how the education system works. We are very worried that we are setting ourselves up for failure,” Manuel said. DM