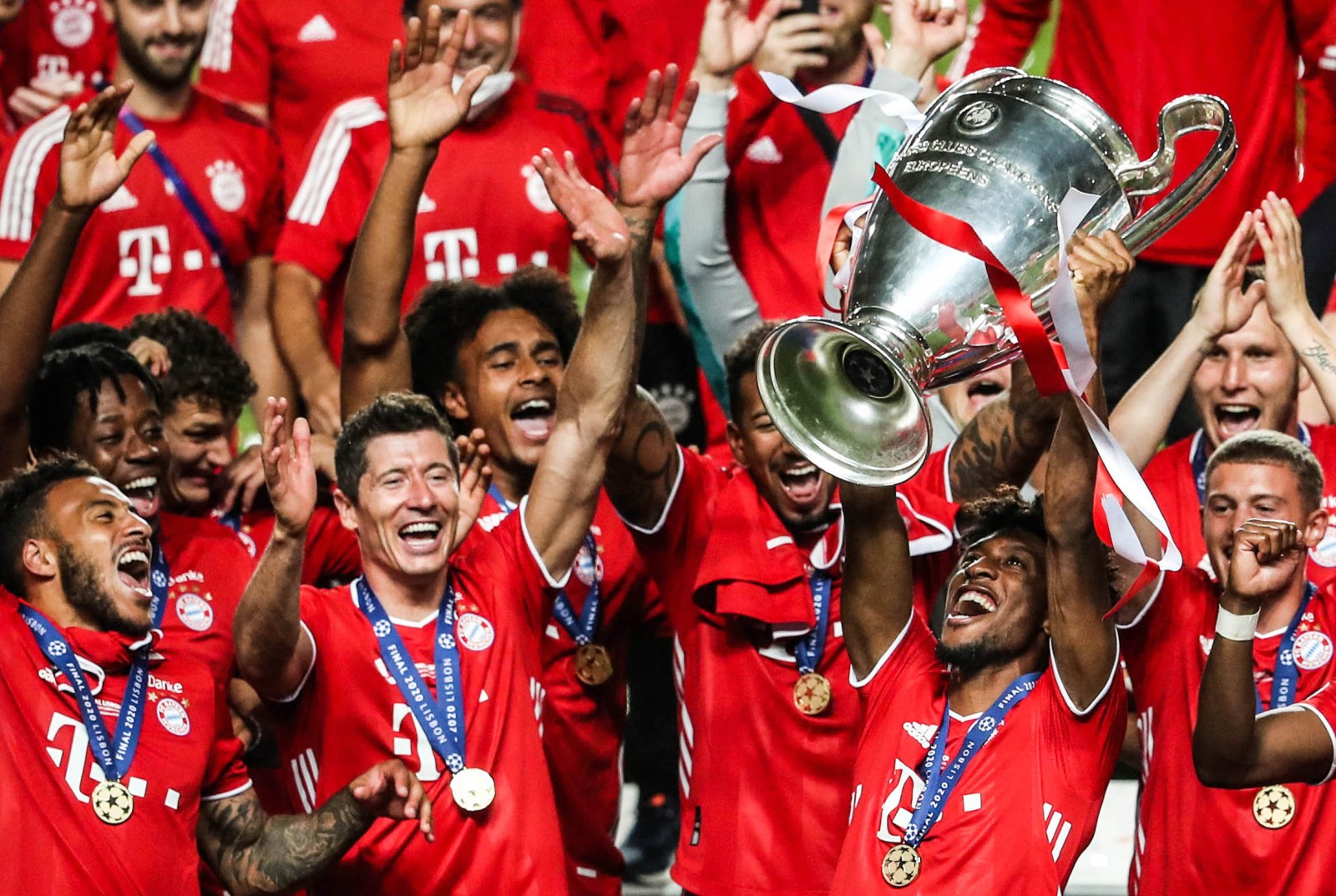 The 2019/2020 Champions League is the longest on record, having started over a year ago with 48 teams. Preliminary qualifiers were played on 25 June 2019 in Kosovo and San Marino and ended in an empty Stadium of Light in Lisbon on Sunday night, 14 months later.

After 119 matches, the best team won the 2020 Champions League. Bayern Munich were crowned 2020 winners with a 1-0 win over Paris Saint-Germain (PSG), as two of the most eye-catching squads in football produced a tempestuous final.

Bayern became the first team in the tournament’s history to win 11 games in a row in the competition, which included an 8-2 quarter-final evisceration of Barcelona as they won the title for a sixth time. It was Bayern’s first Champions League title since 2013, earning coach Hans Flick his third major trophy after only nine months in charge, adding to the Bundesliga and German Cup crowns.

The match was played to the now ubiquitous sounds of canned crowd effects sourced from a video game. During moments when the soundtrack failed to match the play, the echoes of the thump of boot on ball, or the perfectly audible shouts of coaches urging or berating players reverberated through to the deserted bleachers and into millions of homes.

The match never quite rose to the heights expected with two of the most attacking teams in the tournament. Eight yellow cards told one story, but the other was of a Bayern team that was ruthless and superior in almost every department.

It was also a fitting end to a tournament that at one stage never looked like being completed due to the coronavirus pandemic. It was a battling, pragmatic match, in keeping with the state of the world in 2020, rather than the flashy largesse of another time. And to some, it was a win for old-school values over new money. Of substance over style.

For a sport that is reliant on fans to lend it drama and context, the quality of football seen throughout the competition, but particularly in the hastily rescheduled post-lockdown Portugal bio-bubble, was sensational.

Uefa, the governing body of European football, needed the Champions League to come to a “natural” conclusion after it was suspended in March because of global Covid-19 lockdowns. Having a winner and completing a season on the field was secondary to the hundreds of millions of euros in TV money income Uefa needed to safeguard. No tournament would have meant lost revenues.

PSG are precisely the type of project that the Champions League has spawned. Financial Fair Play, the supposed regulatory framework designed to stop obscene spending, should be renamed Financial Foul Play. PSG’s army of brilliant lawyers has found every loophole in the system to ensure that PSG spend what they want in pursuit of success.

And no expense has been spared to become the best club in Europe and by extension, the world. PSG dominate the mediocre Ligue 1 in France. That is inconsequential and simply a by-product of their wealth and depth of talent. PSG exists in this form only to be champions of Europe.

PSG is a club bankrolled by endless wells of Qatari oil money. This is a vanity project for its owners, who barely blinked when spending €222-million (R4.49-billion) on one player – Neymar. That 2017 transfer was 125% more than the previous record (Manchester United’s signing of Paul Pogba). It was a statement that said, “We will spend what we like and there is nothing you can do about it.” It was the same brazen attitude that South Africans know from seeing lowly government officials buying R2.5-million cars on a modest salary.

Throw in a further €145-million (R2.93-billion) splurged on striker Kylian Mbappe and it’s clear PSG couldn’t care less about spending regulations and the soul of the game.

According to www.transfermarkt.com, since Qatar Sports Investments bought the club in 2011, it has spent €1.304-billion (R26.4-billion) in transfer fees alone in an attempt to become the best club in the world. PSG’s wage bill, on top of that spend, doesn’t bear thinking about. It’s almost a crime against humanity that they haven’t won the Champions League after the money they have spent.

The piles of money to be made from successful runs in the competition are vital for many clubs, but, for a handful such as PSG, it’s the prestige that the owners crave. Owning a Champions League winning football club is just another successful plaything to boast about on yachts with billionaire chums.

In a different way, RB Leipzig, seemingly a fairytale story after only 11 years in existence to Champions League semi-finalists, are like PSG. The club was born and bred to become a successful branch on the Red Bull drinks empire’s marketing organogram. They are the football project of a much larger business strategy.

That’s not to say the likes of Bayern Munich, Real Madrid, Barcelona and Liverpool are not wealthy and don’t spend vast amounts of money on players. But their spending is less cynical than PSG, Manchester City (who have yet to progress past the quarter-finals of the Champions League despite spending billions) and Leipzig, where the business model can only be sustained by a rich benefactor.

The more traditional clubs need to achieve footballing success as a means to financial stability and clout, not the other way around.

PSG’s ownership and business tactics aside, they at least have used their wealth to assemble some fantastic players under a coach, Thomas Tuchel, who not only wants to win, but to win in style.

And for neutral sports lovers everywhere, it’s fun to watch. Bayern Munich has been built, less expensively, in the same mould. The modern Bayern has mirrored the modern German national team. They play with style and swagger and not the pragmatism of German football’s sepia-toned past. The 2020 Champions League final was always going to be easy on the eye even if there weren’t as many goals as expected.

The opening half didn’t deliver a goal, but it brought chances. Mbappe and Angel di Maria both had clear opportunities and both failed to find the back of the net. At the other end, Lewandowski hit the post and had another point-blank header blocked by PSG keeper Keylor Navas. PSG had the better chances but based their game largely on attacking on the break. Bayern had more control and it was telling in the second half.

It was almost all Bayern after the break as they turned the screw. Neymar and Di Maria, increasingly frustrated at the lack of chances, spent more time falling over at the slightest contact than winning little battles. It was wasteful and infuriating, especially as the pair looked dangerous in the final minutes when they chose to stay on their feet as the search for an equaliser became more desperate.

Bayern deservedly took the lead on the hour when Joshua Kimmich’s inch-perfect cross was neatly headed into the far corner by Kingsley Coman. It was Bayern’s 500th goal in the Champions League.

Coman, a Frenchman from Paris drove a dagger into the heart of his hometown team. He was a constant threat down the left side and as Kimmich increasingly came forward PSG were stretched.

But with the firepower the Parisians possess, they always had a chance at 1-0 down and the Brazilian Marquinhos forced a fine save from Bayern keeper Manuel Neuer deep into the second half. The German shot-stopper redefined the art of goalkeeping by playing as a sweeper, so it was no surprise he saved Marquinhos’ effort with his foot.

Despite the scoreline, Neuer and Bayern put the boot in on the night. And perhaps, they put it in for a small piece of football’s soul too. DM