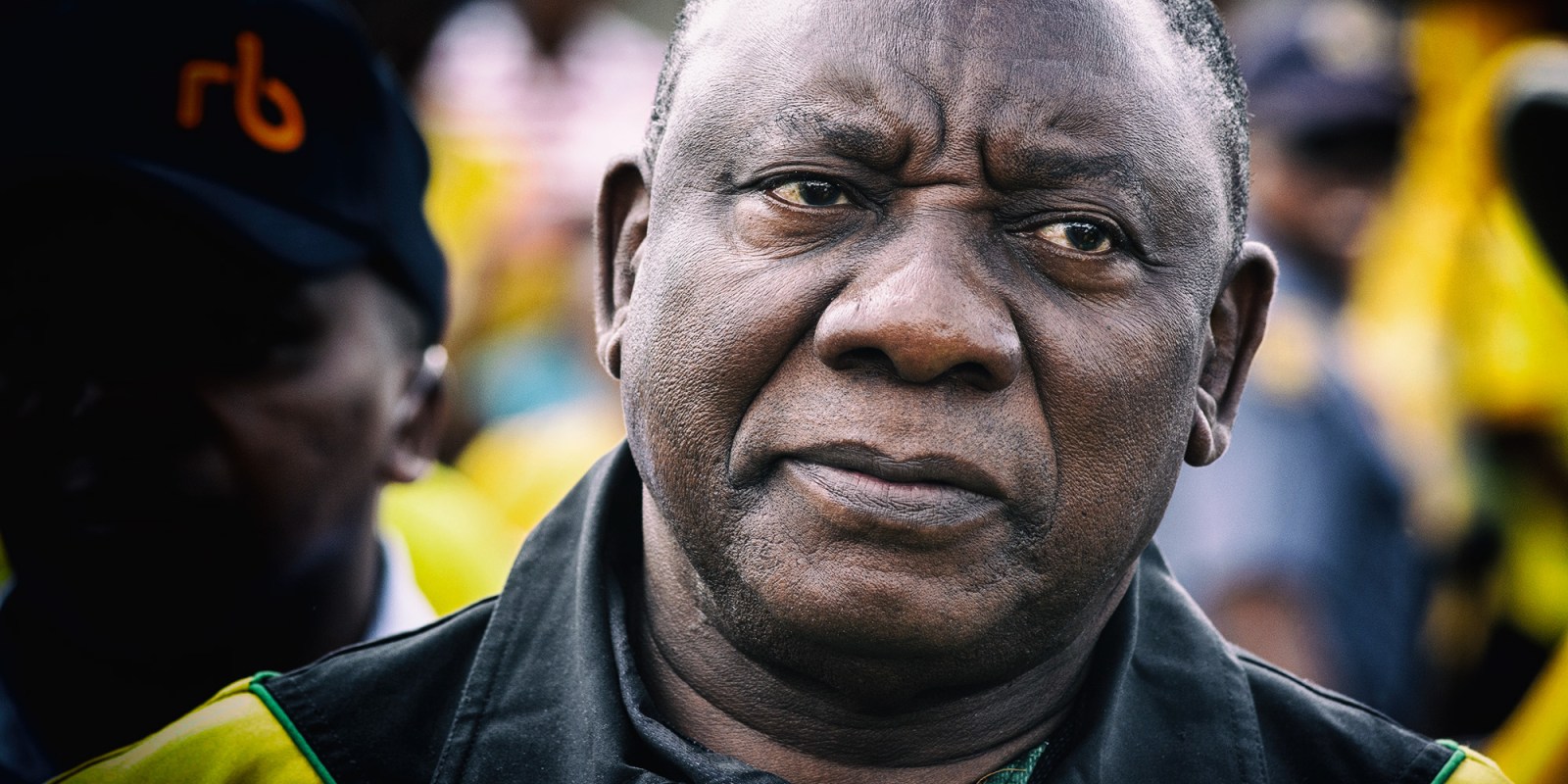 President Cyril Ramaphosa will be focusing on public servants during September 2020 which is Public Service Month. (Photo: Waldo Swiegers/Bloomberg via Getty Images)

In a seven-page letter, President Cyril Ramaphosa read the riot act to rank-and-file ANC members about corruption on 23 August. This followed a letter by ANC secretary-general Ace Magashule, also cracking the whip against corruption. But the letters suggest that the party isn’t as much at war against graft as it is in a battle with itself.

President Cyril Ramaphosa has, once again, drawn a line in the sand against corruption by ANC high-fliers in a seven-page letter to party members asking for their help in achieving the party’s stated objectives of rooting out the scourge.

In the letter dated 23 August, he writes “the best-known form of corruption” was tenders to friends and family. This comment follows ANC secretary-general Ace Magashule’s defence earlier this month of government contracts to his children, when he told News24 there was no law prohibiting family members of ANC leaders from doing business with the state. “Tell me one leader of the ANC who has not done business with government,” Magashule added.

The finger now points back at Ramaphosa’s office, after his spokesperson Khusela Diko stepped aside after it emerged that her husband made a bid for a tender for personal protective equipment from the Gauteng government. Sunday Times 23 August reported claims made in court papers that he made an 800% profit on these.

Last week, there was outrage about the swearing-in of former Ethekwini mayor Zandile Gumede as a member of the provincial legislature. Gumede, who has considerable support within the party in the metro, and who is aligned to ANC secretary-general Ace Magashule, had to step down as mayor last year because she faces charges related to corruption. She is currently out on R50 000 bail.

In the letter, addressed to ANC members with the salutation “dear comrade” and distributed on WhatsApp to ANC members on Sunday morning, Ramaphosa reminds members of the resolutions taken at the party’s 2017 conference in Nasrec to root out corruption.

Despite this, he writes: “Today, the ANC and its leaders stand accused of corruption.” He continues: “The ANC may not stand alone in the dock, but it does stand as Accused No 1.”

Stating that those who are corrupt have no place in the ANC, Ramaphosa asks party members to take a stand against corruption and make this a turning point in the fight. “It is you who chooses the leadership, who sets the policies and who implements the programmes of our organisation,” he writes. “It is you who lives in communities, who interacts daily with the frontline of service delivery and who sees the damage that corruption causes.”

He says the party’s national executive committee resolved “at its last meeting, at the beginning of this month” to “deal decisively with corruption and to restore the integrity and values of the ANC”. He writes: “Now is the time, the NEC has resolved, to make a break with the past and to act.”

It’s a letter that is likely to be met with both praise and scepticism.

It follows a Zoom meeting by the party’s provincial chairpersons and secretaries on Wednesday 19 August on the topic, which proposed a number of measures for the party to tackle the corruption scourge, including bringing in top legal minds and forensic experts, City Press reported on Sunday.

A number of these steps were outlined in a letter written by Magashule to provincial chairpersons and secretaries ahead of the meeting, in which he also quoted the party’s 2017 conference resolutions on graft, but with some differences in emphasis to Ramaphosa’s letter.

The content of the Magashule letter was reported widely at the weekend, and has not been denied by the ANC, though independent verification was not forthcoming at the time of going to press.

In Magashule’s letter, he includes “those [ANC leaders] charged in courts”, alongside “those accused of corruption and other serious crimes against the people” as among those ANC leaders who were expected to step aside “from their positions and responsibilities”.

Such a measure could extend to Ramaphosa himself, following a lengthy affidavit by political foe, Black First Land First party leader Andile Mngxitama, submitted at the Hillbrow police station on 22 August, in which he highlights alleged corruption following the funding of Ramaphosa’s campaign to become party president in 2017. The Citizen reported that Mngxitama was hoping for this to be the foundation of an investigation by the Hawks. “I rely on documents that are already in the public domain and admitted by President Ramaphosa in his own affidavit challenging the Report of the Public Protector in the case of The President of the Republic of South Africa v The Public Protector and Others Case Number 55578/2019,” his affidavit is quoted as reading.

Mngxitama claims those who helped fund Ramaphosa’s campaign benefited after his election as some were appointed in key positions while some businesses received lucrative contracts with the government. No names are specified.

Ramaphosa has also recently been cited in a court action in papers filed in the Pretoria High Court by the Economic Freedom Fighters, in which they want to compel him to make public a list of the funders of his presidential campaign in 2017 to avoid him being “captured” by those who funded him. A court last year ruled that the list be kept confidential, on the grounds that it contained sensitive personal information, after this list was submitted in court by Public Protector Busisiwe Mkhwebane during a review application by Ramaphosa of her report into a R500,000 donation to his campaign by late Bosasa CEO Gavin Watson. The list was subsequently leaked to the media.

Should the party’s call for those to step aside include Ramaphosa, it could cause his anti-corruption campaign to backfire or stall.

In Magashule’s letter, he said that when compiling the list, the national officials might ask for help from the party’s integrity commission “or any other members who can be called upon to make a contribution”. He proposes that his office as well as that of treasurer-general Paul Mashatile – who was close to Ramaphosa’s 2017 campaign but who has since moved closer to Magashule – appoint “a team of ANC cadres to examine independently with the relevant authorities any outstanding criminal charges or criminal convictions” of ANC leaders in government positions. Such leaders, including ANC MPs, MPLs, mayors, mayoral committee members, chief whips, and chairs of portfolio committees, should submit a declaration of assets, shareholding, directorships and companies within five days and they should also obtain a police clearance certificate to determine whether they are charged with any crimes, or are awaiting trial or accused of any crimes.

On the other hand, Ramaphosa’s letter omits the wider reference to those charged in courts, but – in what appears to be a swipe at Magashule – includes a call for the need to develop a clear policy “on ANC leaders and their family members doing business with the state”. He adds: “We must acknowledge that once one accepts a leadership position, a higher standard of behaviour applies.”

Magashule’s letter mentions nothing about family members, but does quote a conference resolution on banning party slates. It states: “Investigate and prosecute all cases of vote or support buying, or membership or branch gatekeeping”.

Some detractors have called for Ramaphosa to be implicated in wrongdoing in this regard as documents show that he paid campaigners ahead of his election at the Nasrec conference.

Apart from the infighting, and negative international publicity, including an article in the New York Times this week titled “South Africa’s big coronavirus aid effort tainted by corruption”, there is also likely to be worry within the ANC ahead of next year’s local government elections. Both Ramaphosa and Magashule referred to taking steps against ANC members and leaders accused of abusing food parcels – distributing these to friends and family members and in exchange for support for the party – and Covid corruption.

Ramaphosa writes: “When we went to the general election last year, we admitted the mistakes we had made, we acknowledged how corruption and state capture had damaged our country, and we made a solemn pledge to our people to correct our ways. Despite the clear progress we have made since the election, we still have to give full effect to the promise we made.”

He says the ANC must “mobilise for a ‘whole of society’ response against corruption and ANC members must support progressive organisations in their stand against corruption”. He listed measures taken by government, such as the “establishment of a multi-agency centre that coordinates the work of several investigative and prosecutorial bodies in detecting and acting against criminal activities” as well as empowering the Special Investigative Unit to investigate “any alleged corruption or misuse of Covid resources in any department, province, municipality or state institution”. Details of all the tenders awarded during the national state of disaster are also being published.

Ramaphosa, who has in the past enjoyed popular support even outside the ANC, writes: “The ANC and its members must continue to respect the Constitution of the country and the rule of law”. He urges ANC members to “restore the integrity of our movement and earn the trust that the people of South Africa have placed in us”. DM