The missing R617-million: Can the Bapo Ba Mogale retrieve their stolen funds? 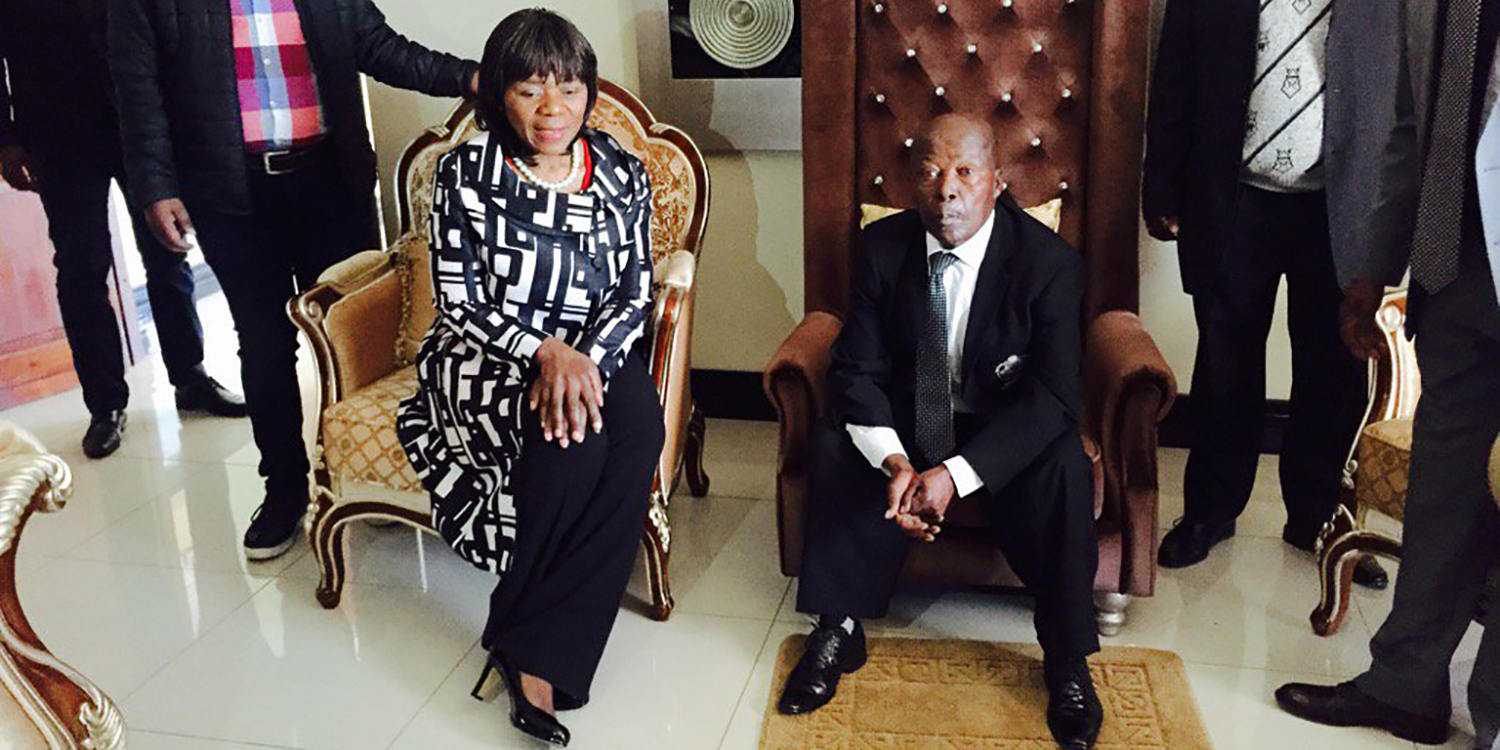 In 2016, former public protector Thuli Madonsela was working to deliver a report in which the perpetrators of a R617m fraud would be named. But Madonsela brought no justice to the 40,000 members of the Bapo Ba Mogale from whom the funds had been stolen, and neither did her replacement, Busisiwe Mkhwebane. On the eve of a third promise to release the report, set by the North West government for Friday 21 August 2020, Daily Maverick was granted access to documents that demonstrated the scale of the confusion.

The venue was Forum 3 of the South African Human Rights Commission in Braamfontein, Johannesburg, and the date was late September 2016. Kgomotso Morare, an activist from the Bapo Ba Mogale community in North West province, had the full attention of his audience – his head was covered in bandages from what he claimed was a recent panga attack, and his voice was booming through the hall.

“As I’m sitting here today, it’s my daughter’s birthday,” he yelled, “I cannot be at home because of the fear!”

Home for Morare had always been Bapong, a settlement of 40,000 people in the shadow of the Marikana mine, which in August 2012 had borne witness to South Africa’s largest state-sanctioned massacre of human beings in post-apartheid history. But Morare had taken the microphone to talk about a different kind of violence. His specific gripe concerned the formation of a company called Bapo Ba Mogale Investment NPC (BBMI), which had been established in 2014 as the business wing of the community.

The three founding directors of BBMI, who claimed to have the interests of the Bapo at heart, had swapped the 12% annual royalties from the platinum mines for R100-million in cash and R540-million in equity in Lonmin PLC. But the transaction was concluded without the community consultation required under living customary law, the Mineral Petroleum Resources Development Act and the Interim Protection of Informal Land Rights Act. In other words, the terms of the deal were kept secret from just about every member of the Bapo.

In hindsight, the reasons for the secrecy were plain. A giant fraud was about to be perpetrated against the 40,000-strong community, somewhere in the region of R600-million. Former public protector Thuli Madonsela would end up working the case, and in July 2016 would deliver a preliminary report to the residents of Bapong – in the report, Madonsela would explain that of the R617-million in royalties and interest that had been deposited in the so-called “account D” (managed by the North West provincial government) since 1994, only R495,000 remained.

“When we ask such questions [about the disappearance of the funds],” Morare told the SAHRC audience, “that’s when we are attacked.”

The allegation in Daily Maverick’s original investigation into the matter was that the attacks had been orchestrated by a group of vigilantes called “The Ambassadors,” who were reportedly funded by Lehlohonolo Nthontho, BBMI’s founding CEO. For the three months from July to October 2017, there was hope that Nthontho and his co-directors would be brought to book – Madonsela was scheduled to return to Bapong with a final report, which would apparently name the individuals involved.

What’s mine is mine: How the Bapo Ba Mogale got robbed of R800 million

But on 8 October 2016, all she could do was offer the Bapo Ba Mogale a series of apologies: first, for the “technical difficulties” that had hamstrung her efforts to name the perpetrators, and second, for the fact that a further R80-million had “gone missing” from account D, which together with the R100-million that had been borrowed from the PIC meant that the community was in serious debt.

Also, although Madonsela had vowed at the October meeting that the final report would be ready in December 2016, by the time it was eventually released in June 2017 by the new public protector, Busi Mkhwebane, it was a document devoid of teeth.

“The report is quite empty,” Morare’s activist colleague, Abbey Mafate, explained to the media. “We’ve not achieved our goals as a community. We were expecting change, hoping that justice would be done. It seems we wasted our time.”

In the three years since Daily Maverick last covered the story, justice for the Bapo Ba Mogale has slipped ever further away. In late July 2020, we were handed a sheaf of documents that demonstrated just how dire the situation has become. While the former directors of BBMI and their alleged enablers in the North West government have been successfully dodging prosecution, community activists have been attempting to keep up with a raft of frustrating and often contradictory developments.

For starters, the investment company that was purportedly formed to pull the Bapo out of poverty has been the subject of at least three civil actions. The first, brought by VBS Mutual Bank against BBMI and Nthontho, involved a claim for the repayment of a R4.65-million loan. A settlement was agreed with VBS but not honoured, resulting in the bank attaching BBMI’s account and withdrawing R1.7-million. At the time of this writing, it appeared that the account remained attached with R2.95-million still outstanding.

The second matter involved a demand by an entity called Persevcon Contractors for a R14-million remedy in terms of section 344 of the Companies Act, which covers the circumstances surrounding an application for liquidation. BBMI filed answering affidavits and opposed the application on the grounds that only R12.91-million was owed.

The final matter saw KMC Holdings claim R4.6-million in damages from BBMI, for loss of income and profit “due to cancellation of contract as a result of non-payment” (as per BBMI’s own records). Again, the investment company opposed the application on the basis that the amount was incorrect – this time, they claimed, the amount outstanding was actually R230,381, which was supposed to be the last installment of an alleged four-month settlement agreement.

It was against the background of the above litigation that the new directors of BBMI met in Hartbeespoort on 10 October 2019, to amend the memorandum of incorporation of the company. Here, BBMI was attempting to put into practice what had been agreed by the broader Bapo community in November 2017, when Nthontho was suspended and the traditional council (led by the late chief Bob Mogale) was dissolved. At the time, Morare told Pretoria News that the activists’ immediate priorities were to “review the entire equity deal, establish a community trust, fix the tribal offices torched by disgruntled BBMI employees… and suspend Lonmin payouts.”

The last of these payouts, worth R25-million, was apparently made in December 2017, and in June 2019 the 18-month negotiation behind Sibanye-Stillwater’s takeover of Lonmin was formally completed. The roiling community battles in the settlement of Bapong were now the problem of the conglomerate that had just become the world’s second-largest platinum producer. But the amendment of the memorandum of incorporation of BBMI, subject to Sibanye’s approval, would turn out to be another empty effort to fix the core problem of corruption.

For some ambiguous reason, clause 5 of the memorandum was entirely deleted and replaced – henceforth, the company would have only one member, the traditional council itself, “with membership rights… all in a single class, being voting members”. Then, a “reputable firm of auditors” would be appointed “as contemplated in section 34(2) of the [Companies] Act”. Also, in what was clearly meant as a final farewell to the legacy of Nthontho, all references to BBMI’s “chief executive officer” were erased and replaced with the word “manager”.

At around the same time as this document was ratified, however, there was a much more substantial effort to effect charge. On 8 November 2019, less than a month after the directors’ meeting in Hartbeespoort, the Bapo Ba Mogale royal family sent a letter to Professor Job Mokgoro, premier of North West province. The substance of the letter was that a new acting chief had been chosen, with all the relevant protocols of customary and common law followed. The person identified and nominated for the role was Julius Cyril Mogale, who in comparison to the previous incumbent appeared to have a spotless record – upon his death in March 2017, Bob Edward Mogale, who had ruled over the Bapo for three decades, had yet to properly explain to his people why his “royal palace” had cost them all of R80-million.

By the community’s reckoning, if anything was a flare for the violence that had been erupting at frequent intervals in Bapong, it was Kgosi Bob’s new home: the R68-million that BBMI had spent on so-called “consultants,” the R2.8-million on décor, the ballooning of the final price to four times the initial budget. But by mid-August 2020, despite the fact that the community had been without an official regent for more than three years, there was still no response from the office of the North West premier.

Was Mokgoro’s silence due to incompetence, the general uncertainties and anxieties brought on by Covid-19, or something more sinister? Although Daily Maverick was unable to arrive at a definitive answer, there was a final set of documents that rendered the question moot.

On 22 November 2019, the Department of Justice, through the North West High Court, issued a certificate of appointment of provisional liquidators for BBMI. Four months later, on 24 March 2020, the same court ordered that these liquidators take control of the property and share certificates of all subsidiaries of the company. The powers of the liquidators were then extended under section 386(5) of the Companies Act, granting them the authority to appoint attorneys and forensic investigators as well as to dispose of assets.

“If BBMI gets fully liquidated,” Morare told Daily Maverick in mid-August 2020, “the community might never get those hundreds of millions back.”

It was a statement that could just as easily have been framed as a fait accompli. In terms of the report presented by the BBMI interim board of directors to the Bapo Ba Mogale traditional council on 28 May 2020, it was looking likely that this worst-case scenario would indeed play out.

The interim board noted in its report that it had “discovered” an oversight – “there was no accountability with regard to community businesses,” the report declared, “due to lack of financial reports of all businesses.”

No more than a sentence was dedicated to this criminal breach of corporate law, with the report quickly moving on to BBMI’s turnaround strategy. What the strategy involved, in a nutshell, was the above-mentioned amendment of the memorandum of incorporation of the company.

As it turned out, the special general meeting where the strategy had been fleshed out was held on a game farm that belonged to Sibanye-Stillwater. The meeting was supposed to take place over two days, but on the second day, according to the report itself, “none of the executive committee members attended”.

And so, except for two developments that occurred in mid-August 2020, it seemed as though the story was going to end exactly where it started. The first was that Sibanye-Stillwater promised to throw its weight behind the recovery of the missing millions, and the second was that the North West provincial government, on very short notice, announced a release date for the final report of 21 August 2020.

“We can’t boycott a report whose contents we don’t know,” said Morare, suggesting that a cohort of Bapo activists would attend the event in Rustenburg, albeit with their expectations in check.

Given their long history of disappointments, it was probably the wisest stance to adopt. DM

Postponement of COP26: A considered delay, or climate cop-out?

How the Musina-Makhado SEZ will parch the people of Zimbabwe