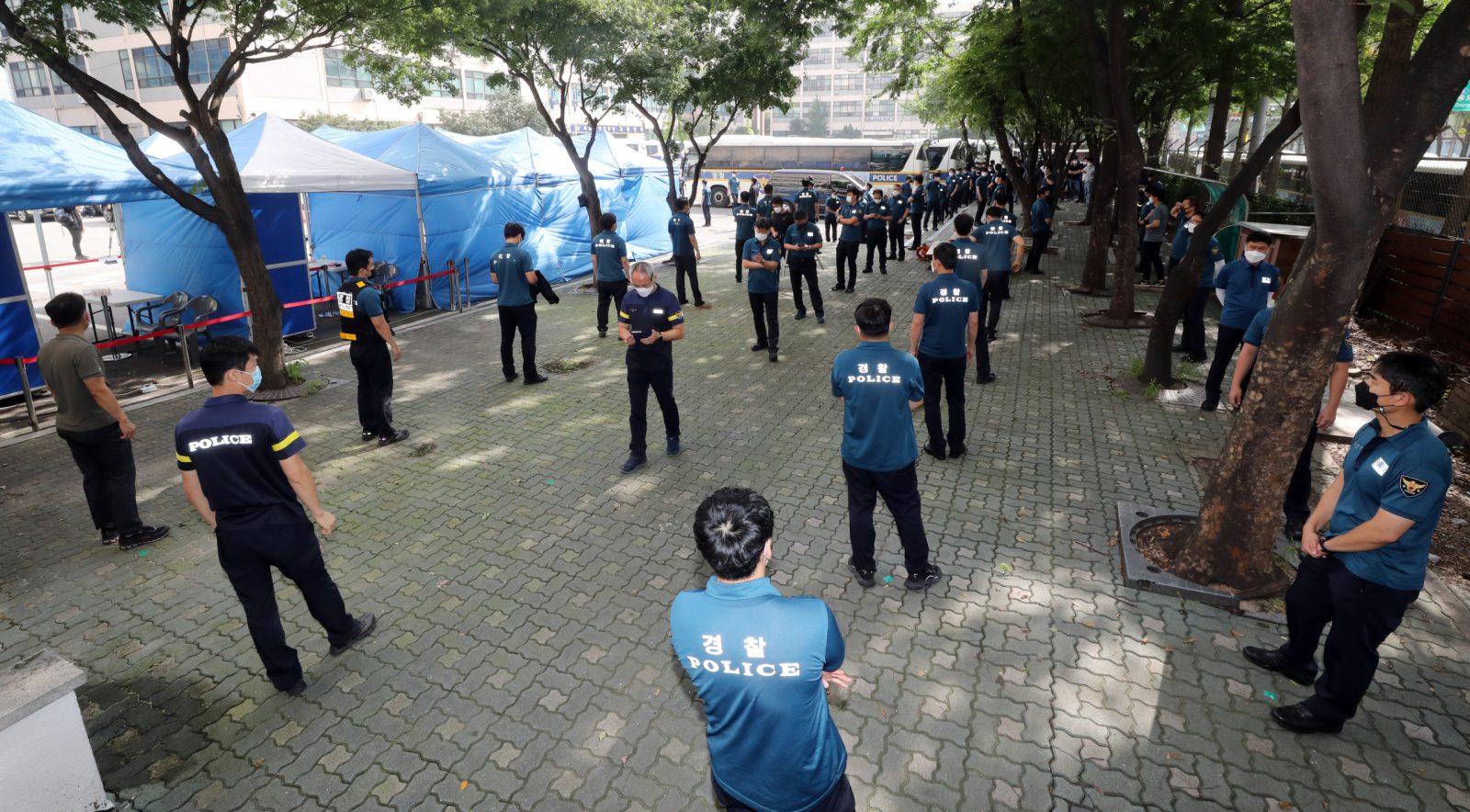 epa08612024 Police officers, who were mobilized to keep order at a conservative rally in Seoul over the weekend, wait in line to receive COVID-19 tests at a makeshift testing station at the Seoul Metropolitan Police Agency in Seoul, South Korea, 19 August 2020. EPA-EFE/YONHAP SOUTH KOREA OUT

SEOUL, Aug 21 (Reuters) - South Korean health authorities warned on Friday that a cluster of coronavirus infections in the capital Seoul was threatening to spread after thousands of people attended a rally by conservative political groups last week.

While many of the current spike in cases have been among members of a church, some of whom attended the rally, officials say more people need to come forward and be tested to head off an uncontrollable outbreak.

Amid government complaints that some churches had not been cooperating with health officials, President Moon Jae-in called on Friday for penalties for anyone obstructing anti-virus measures.

Moon’s office said it would be implementing an emergency response system, including high-level meetings every morning and 24-hour work schedules until the crisis has passed.

The Korea Centers for Disease Control and Prevention (KCDC), reported 324 new cases as of midnight Thursday, the highest daily count since March 8. That took the country’s total to 16,670 cases, with 309 deaths.

While most of the new cases are centred in Seoul and the surrounding areas, new cases have also been reported in 16 provinces and metropolitan areas, KCDC director Jeong Eun-kyeong told a briefing.

“We are very worried about a possible nation-wide outbreak, she said.

The government is trying gather the names of everyone who attended last week’s rally, as well as the names of the drivers who drove attendees from the provinces, Vice Health Minister Kim Gang-lip told a separate briefing.

To that end, health investigators and police had obtained the cellphone location data of at least 12,000 people who had been in the area, and were seeking to convince the Sarang Jeil Church to hand over a full list of its members, Kim said.

Some church members, who are vocal critics of the Moon administration, have accused the government of conducting a politically motivated witch hunt.

If the new numbers do not decrease over the weekend, however, the government could impose its strictest rules, including closing schools, Jeong said.

For the third week in a row, thousands of South Korea doctors staged a strike on Friday to protest government plans to train new doctors.

The government plans to increase the number of medical students by 4,000 over the next 10 years, which it says is necessary to be better prepared for public health crises like the coronavirus pandemic.

But the Korean Medical Association (KMA), which helped organise the protests, says the country already has more than enough physicians. (Reporting by Josh Smith; Editing by Lincoln Feast.)