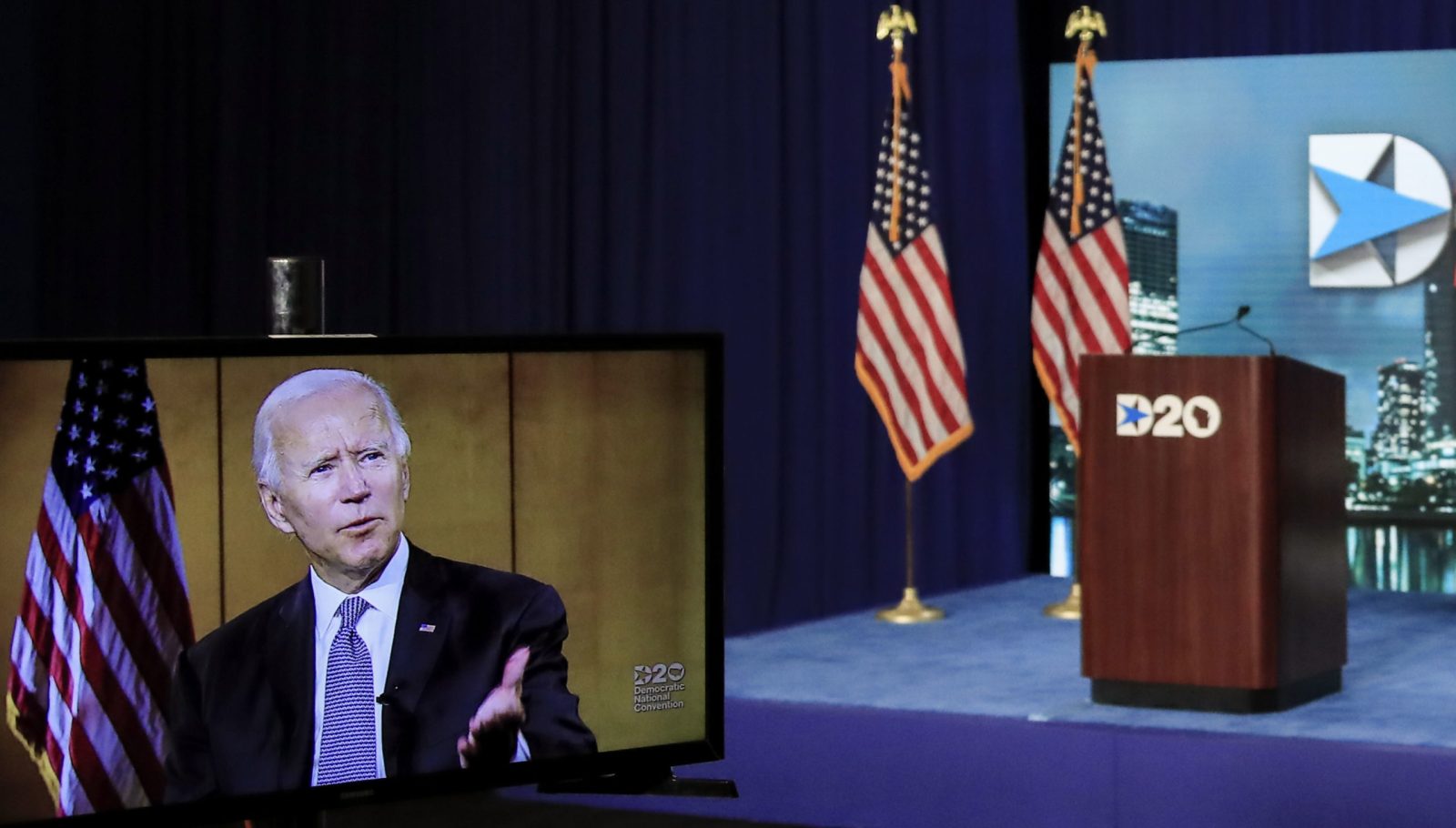 epaselect epa08615645 Images of former Vice President Joe Biden are displayed on a screen in front of the empty stage during the virtual Democratic National Convention at the Wisconsin Center in Milwaukee, Wisconsin, USA, 20 August 2020. Thursday marked the last day of the Democratic National Convention, which is being held virtually for the first time in history. EPA-EFE/TANNEN MAURY / POOL

It’s a case of revolving doors at US schools and colleges as Covid-19 infections spike on campuses. And America is having quite a day as California forests burn while people giving money to build the infamous border wall find out they may have been scammed.

As in South Africa, overall new Covid-19 new infection numbers in the US have started tapering off, but experts say that it only means it’s time to be extra careful to make sure it stays that way. America currently has a death toll of just over 177,000 and over 5.7 million positive cases.

The in-class versus distance learning issue continues to rage almost as hotly as the wildfires currently plaguing California, where fires sparked by lightning have killed at least two people. Late Thursday afternoon, it was reported that more than 360 wildfires were burning in California and that 23 were major fires. Thousands have been evacuated and thousands more are still evacuating.

On Thursday, 20 August 2020, the Chancellor of North Carolina University announced that all undergraduate classes were moving online after it reported a number of Covid-19 outbreaks in various campus locations, while it was reported last week that just over a quarter of learners at public schools in New York City have decided against in-class learning.

Many universities and colleges nationwide are reporting outbreaks of Covid-19, and are implementing more strict distancing and mask wearing rules as scientists warn it may take years before normal (no mask) schooling returns. The State of Georgia currently has the highest number of cases per capita in the US. But one county ran into internet issues this week when Gwinnett County schools tried to attend online classes. The system seemed unable to handle the volume of students trying to log in with reports of only half the students managing to get online.

In Florida, Hillsborough County public schools had to change their decision to offer online learning after the schools were warned that funding would be withheld if in-person learning did not take place. A lawsuit has been filed by the second largest teacher union in the country, together with the Florida Education Association, challenging the reopening of schools on the basis that it violates a Florida law on safe schools.

At least one teacher’s strike is also on the cards, with teachers in Detroit, Michigan, arguing that in-person learning will put them and their families at risk. The Detroit Federation of Teacher Unions said on 19 August 2020 that its members voted overwhelmingly – 91% – in favour of a safety strike. The union emphasised that they are not planning to stop working as teachers would still teach and work remotely.

In the midst of all the back-to-school angst, news broke on 20 August that Steve Bannon, the man who managed US president Donald Trump’s presidential campaign in 2016 and was briefly an adviser to the American president, had been arrested – while on a 150ft yacht – for alleged fraud. Bannon was once described as Trump’s “guiding light” and “ideological soulmate”, before a most acrimonious parting of ways. He is accused, along with three others, for a scheme to defraud donors who had given $25-million to a crowdfunding group, “We Build the Wall”  to raise funds towards building part of Trump’s border wall.

Bannon pleaded not guilty to wire fraud and was released on bail of $5-million and the condition that he not board any yachts – it may be of interest to note that the yacht he was arrested on belonged to an exiled Chinese billionaire – nor travel further than the states of New York and Connecticut for work. He faces a 20-year sentence if convicted.

On 20 August 2020, a federal judge also ruled that the Manhattan District Attorney had a right to access eight years of Donald Trump’s tax returns, dismissing claims that the subpoena for the documents was “wildly overbroad” and issued in bad faith. The taxes are wanted as part of an investigation into the US president’s business practices.

Closing the day for the US, however, was Joe Biden, looking like a safe port during America’s storm. On Thursday night, the Democratic Convention was opened by Andrew Yang, who gained international attention for campaigning on the “Freedom Dividend” – a universal basic income for all American adults. He was followed by the (formerly Dixie) Chicks, singing the national anthem acapella. A moving tribute was paid to civil rights icon and long-time congressman John Lewis. A highlight and part of the remembering of Lewis was the stirring performance of John Legend and Common of the song Glory:

“One day, when the glory comes

The movement is a rhythm to us

And when Biden spoke, he spoke of many issues and problems, including racism: “Will we be the generation that finally wipes the stain of racism from our national character?”

He also spoke of how badly Trump is dealing with the issue of Covid-19, cutting to the heart by speaking poignantly about loss: “I understand how hard it is to have any hope right now… I know how it feels to lose someone you love… I found the best way through grief and loss and pain is to find purpose”. Quoting his late father, he spoke of the dignity of work: “A job is about a lot more than a paycheck. It’s about your dignity. It’s about respect. It’s about your place in the community.”

Looking and sounding strong and determined, Biden called on America to unite behind him: “This is our moment. This is our mission. May history be able to say that the end of this chapter of American darkness began here tonight… This is a battle that we, together, will win. I promise you.” DM

An Wentzel is Daily Maverick Night Editor and specialist reporter, she is currently marooned in the US due to Covid-19.