Round and round they go: Groundhog Day for Telecoms

Round and round they go: Groundhog Day for Telecoms 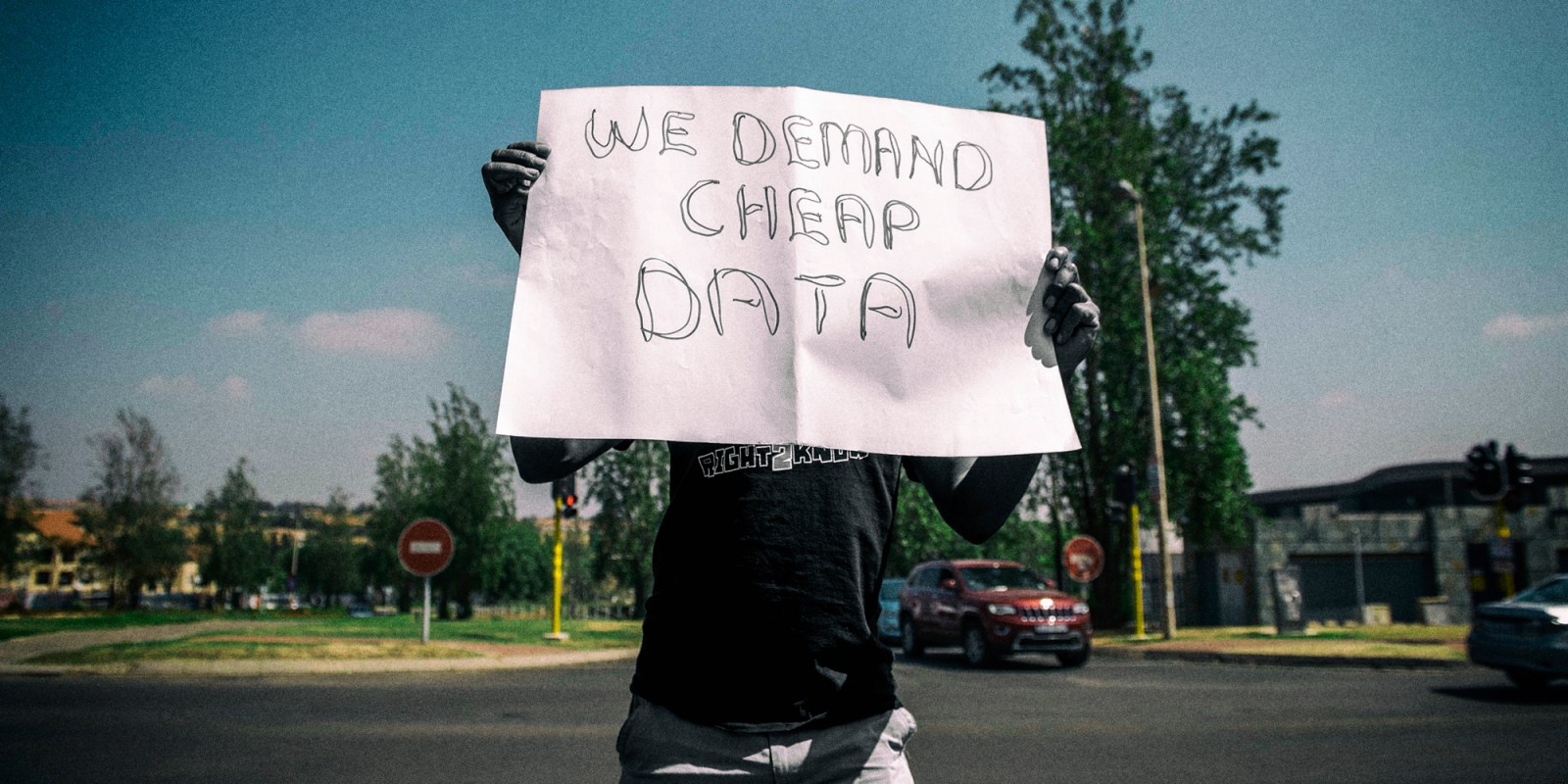 Right2Know supporters picket outside the Vodacom Headquarters during the #DataMustFall protest in 2017 in Midrand. (Photo: Gallo Images / Alet Pretorius)

Bring down the cost of data, say the people. Give us more spectrum, says industry. It’s coming, says the government. This conversation has been going around the mulberry bush since 2016 with government, its own communication ministers, the independent regulator and other vested interests completely unable to get on the same page. In the meantime, an industry report cautions the government not to slap hefty prices on the spectrum, a windfall the finance minister is already banking on.

In his June 2019 State of the Nation Address, President Cyril Ramaphosa committed to reducing the cost of data in South Africa. At the time, he promised that the spectrum licensing process would begin within the month.

He repeated this in his February 2020 State of the National Address.

“An important condition for the success of our digital economy is the availability of high demand spectrum to expand broadband access and reliability,” he said.

The Independent Communications Authority of South Africa (Icasa) undertook to conclude the licensing of high demand spectrum for industry via auction before the end of 2020, but this is looking increasingly unlikely.

In July, Icasa postponed the publication of the invitation to apply (ITA) for spectrum suitable for rolling out 4G and next-generation 5G networks, stating that “given the complexity of the process, there are additional considerations the authority must apply itself to”.

It did not specify the considerations, but these are believed to be disagreements between the minister and the regulator about the process.

A new date has not been provided.

Icasa has been hamstrung by a lack of urgency on the part of the government and the minister in charge, as well as by its own shortage of skills. It is awaiting the appointment of six (of nine) councillors by Parliament and the communications minister. There has been a spat over their final appointment.

The ball is in Communications Minister Stella Ndabeni-Abrahams’ court. She needs to approve the final two names before the six can be ratified by Parliament.

However, while the mobile operators have been itching to get their hands on more spectrum – which is essentially lying fallow – an interim finding from a study being conducted by World Wide Worx into the prospects for 4G and 5G in South Africa, suggests that spectrum pricing may well prove to be a barrier to the future.

The report is based on interviews with major mobile network operators and internet service providers in SA.

In the first phase of the study, interviews were conducted with mobile operators Vodacom, MTN, Telkom, and Cell C, along with Seacom, which provides much of the international “backhaul” that provides operators with data capacity.

They provided a detailed overview of their strategies, priorities and outlook, providing a picture of a complex emerging landscape. They were unanimous on one issue: a high price for bidding on spectrum will have a direct impact on the quality of service provided to rural and urban South Africans.

While the ITA has not been released, a previous version was released in 2016, from which can be deduced that the likely floor price for bidding for auction will be set at R3-billion minimum.

That version was withdrawn after then Minister of Telecommunications and Postal Services, Siyabonga Cwele, sued Icasa for issuing the ITA “prematurely and precipitously without the existence of the requisite regulatory steps that must precede them”, according to a submission to court. In 2018, Icasa agreed to withdraw the ITA.

Quite what the new ITA will look like remains to be seen. What is clear though is that the spectrum will be issued in three main bands, namely 700-800 MHz, referred to as low-frequency bands, and high-frequency spectrum across the 2.3GHz-2.6GHz and 3.5GHz bands. Collectively, these are referred to as “high-demand spectrum”, and the mid-frequency bands are generally regarded as appropriate for 4G services.

When it comes to pricing, the government has three ways of approaching the issue.

The first option is to keep prices as low as possible. “This allows more participants to participate in the auction,” says Dobek Pater, director of business development at Africa Analysis.

The second is to see the allocation of spectrum as a source of revenue for the fiscus and charge the maximum amount possible.

“The risk is that operators pay for expensive spectrum but cannot afford to build the infrastructure for the next five years,” he says. This is undesirable for obvious reasons.

The middle of the road option is usually the more pragmatic. “You don’t want to kill the animal bidding for the spectrum, but you also don’t want every Tom and his dog to bid. You want to attract bidders with money and expertise.”

One option, not yet offered by Icasa, is for instalment pricing, allowing operators to pay off the auction fee. This would also make the auction more viable for smaller players.

Different variations of these approaches have been tried around the world. Beijing is providing the bandwidth for 5G networks almost for free, operating on the theory that being the first to reach massive scale in 5G (as the US did with 4G) will help it with its plan to move away from mass-production and dominate in high-tech industries like factory automation, robotics and autonomous driving.

US carriers, by contrast, bid $2.7-billion at two auctions of 5G airwaves, according to the Federal Communications Commission. In India, 5G spectrum auctions have been delayed to 2021 or beyond because industry operators say they cannot afford the fees the government plans to charge – the Indian government had planned to raise about $70-billion from the auction.

“Pricing is critical,” says Dominic Cull, a specialist in telecommunications law at Ellipsis.

The delay is curtailing growth and investment, and what frustrates network operators is that significant blocks of high-demand spectrum have not been issued by Icasa since 2005, when it allowed the use of the 2.1GHz band for the roll-out of 3G networks by Vodacom and MTN. Cell C was allocated spectrum in 2011.

Since then, operators have had to “refarm” 3G spectrum to facilitate the roll-out of 4G to consumers. As a result, an investment that could have been made in providing affordable access to customers was diverted to servicing technical issues.

Both Vodacom and MTN confirmed that lower spectrum prices would incentivise greater coverage of rural areas, noting that less money spent on spectrum translates to more money they can spend on infrastructure for serving consumers.

The GSM Association, an industry organisation that represents the interests of mobile network operators worldwide, noted in a recent 5G policy paper that governments and regulators should assign 5G spectrum to support their digital connectivity goals, rather than as a means of maximising state revenues. Effective spectrum pricing policies are vital to support better quality and more affordable 5G services, the association says.

“When we look at other countries with lower consumer data prices, there is a direct correlation between lower spectrum auction prices and greater network investment,” says Arthur Goldstuck, managing director of World Wide Worx and principal analyst on the 5G research project.

“At the same time, delays in making high-demand spectrum available will probably hurt poverty-stricken areas most, because those who are willing to pay for coverage will naturally see more infrastructure investment in their areas, compared to those who can’t afford data,” says Goldstuck.

One option, not yet offered by Icasa, is for instalment pricing, allowing operators to pay off the auction fee. This would also make the auction more viable for smaller players.

“The promise of new entrants to the market will be still-born if we don’t see creative approaches to pricing,” says Goldstuck.

“Only the major operators have the existing infrastructure and capex budgets to allow for a national roll-out of 5G, and a high upfront cost means that even regional newcomers will be kept out of the auction.”

Getting the pricing right is critical. But right now just appointing six Icasa councillors and releasing the ITA would be an achievement. DM/BM