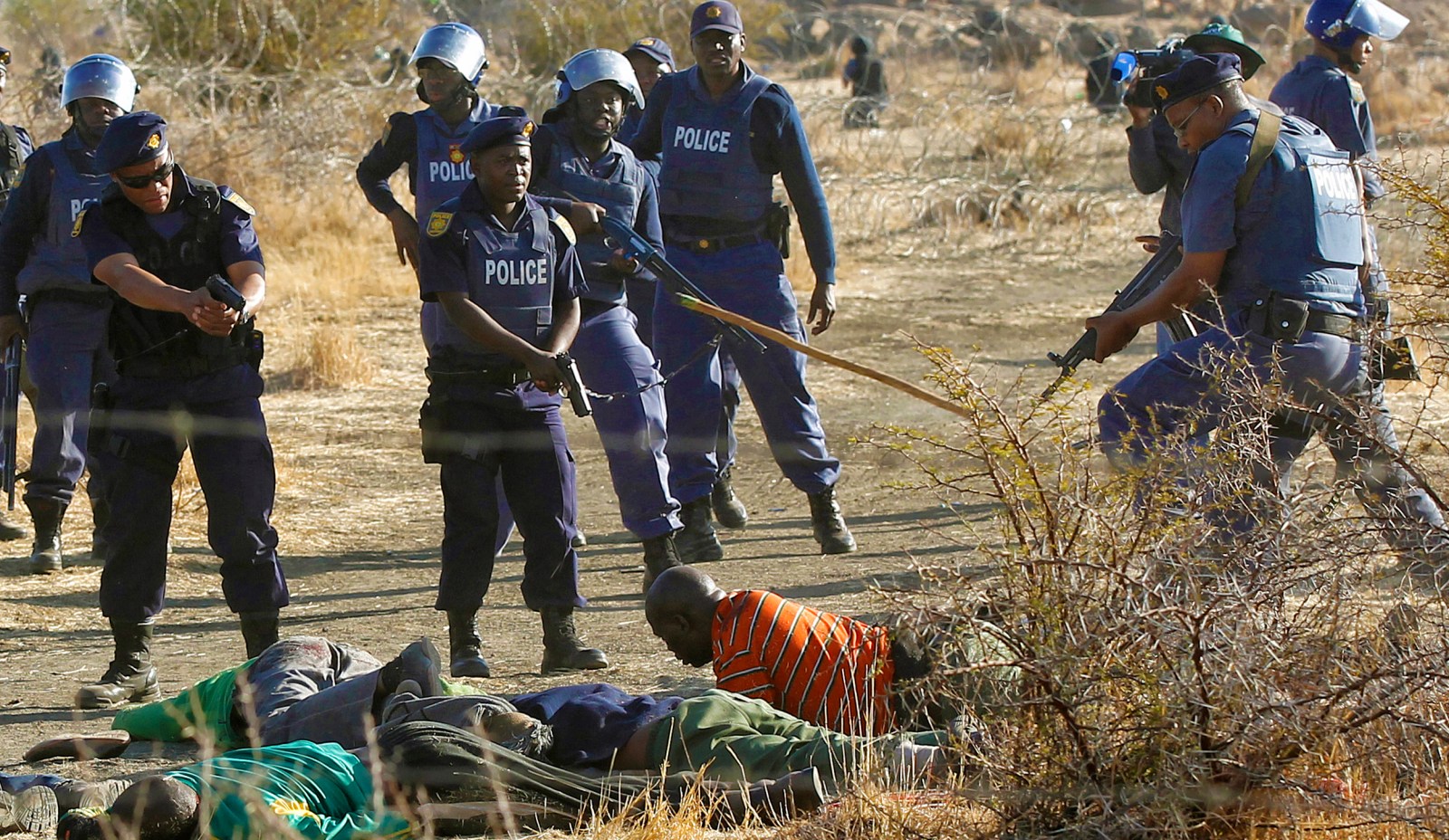 In this file photo, policemen give instructions to an injured miner (bottom right) after the striking miners were shot outside Marikana on 16 August 2012. (REUTERS/Siphiwe Sibeko)

Two years after being submitted, the report still hasn’t been considered by Parliament, nor has it been released to the public.

The Marikana massacre was a South African tragedy. It was also a policing disaster. But little has changed to improve policing in the country since then. One reason for this is the failure of government and the South African Police Service (SAPS) to act on recommendations made two years ago by an expert panel set up on the advice of the Marikana Commission of Inquiry.

The mineworkers’ strike that started on 9 August 2012 had already turned violent by the time the SAPS intervened. Their intervention only made things worse. Four days later, two police and three strikers were killed in a clash precipitated by police incompetence and ill-discipline. Then, on 16 August 2012, 34 men were shot dead and another 60 seriously injured by police gunfire.

The subsequent Marikana commission highlighted numerous shortcomings in policing that contributed to these deaths. The final report recommended that a panel of international and local policing experts be established to look at the policing problems highlighted by Marikana. The panel submitted its report in July 2018 but the findings have not yet been released, let alone implemented.

After considering the evidence and submissions from local and international policing experts, it was clear to the commission of inquiry that the massacre was partly the result of failings of top police leadership and probably influenced by inappropriate political considerations. But evidence indicated that other aspects of policing had also led to the disastrous outcome.

A major contributing factor to the high death toll at Marikana was that many of the police were armed with R5 automatic rifles. It is accepted internationally that automatic weapons should not be used by police in managing crowds. They are only suitable for policing when used against assailants armed with comparable weaponry.

The killings on 16 August started when a group of strikers were approaching a line of police members. At the commission, the SAPS maintained that the strikers were attacking them but this has never been confirmed. Nevertheless it is apparent that some of the police believed they were being attacked.

In the space of roughly 10 seconds, 48 police fired 305 rounds of ammunition of which 247 were R5 rounds at the approaching strikers. This barrage of gunfire killed 17 people. Shortly afterwards at a location nearby the police fired another 198 R5 rounds at miners, most of whom were trying to hide or flee, killing another 17. Of the 34 people killed, 31 were killed by R5 bullets.

The panel’s focus was not restricted to public order policing. The failures that led to the Marikana massacre reflected wider shortcomings in the SAPS, including serious deficiencies at top management level.

The final report of the Marikana commission accepted the argument, made in various submissions, that weapons capable of automatic fire should not be used in crowd management. However, it was also concerned about how police should deal with armed crowds.

During the clash precipitated by police on 13 August, two SAPS members were killed by armed miners, highlighting police vulnerability in these situations. This was a key reason for recommending the appointment of the expert panel – to clearly define an approach that ensures police safety when faced with armed crowds.

The panel’s focus was not restricted to public order policing. The failures that led to the Marikana massacre reflected wider shortcomings in the SAPS, including serious deficiencies at top management level. For example, at the inquiry extensive evidence emerged of police dishonesty, including systematic efforts by senior police leaders to mislead the commission.

This highlighted a police organisational culture that sought to undermine transparency and accountability. To date, none of the commanders or officers involved in the killings have been sanctioned.

The commission therefore called for the panel to consider a number of recommendations on improving policing that it had received. These implied the need for organisation-wide change in the SAPS, which made good sense. The problems that gave rise to Marikana could not be resolved in a piecemeal fashion with a technical fix. They partly originated from chronic issues affecting the entire organisation.

Then police minister Nathi Nhleko established the panel in April 2016 under retired Judge David Ntshangase. Members of the 18-person panel included SAPS generals, local and international policing experts, and representatives of police trade unions. The panel submitted its report to the police minister in July 2018. Sadly Judge Ntshangase passed away not long after, in November 2018.

Ultimately the panel’s focus was on developing a framework for creating a professional, principle-based, service-oriented and accountable system of policing. This included addressing questions about reducing the risk of political interference, ensuring consistent standards of leadership, and demilitarising the SAPS. The 460-page report containing 136 recommendations reflects the consensus of the panel.

Over the past few months, South Africa has been confronted with evidence of police abuse in enforcing the Covid-19 lockdown. More broadly we’ve seen chronic corruption at senior levels of the SAPS, the misuse of less-lethal weapons, police ineffectiveness in addressing crime, and the weakness of accountability measures.

These problems highlight the need for profound changes in policing in South Africa, and the expert panel provided direction on how to achieve this. Regrettably, more than two years after it was submitted to Police Minister Bheki Cele, the report still hasn’t been considered by Parliament, nor released to the public. It is high time that the minister rectifies this. DM