The greatest female athletes of the 21st century 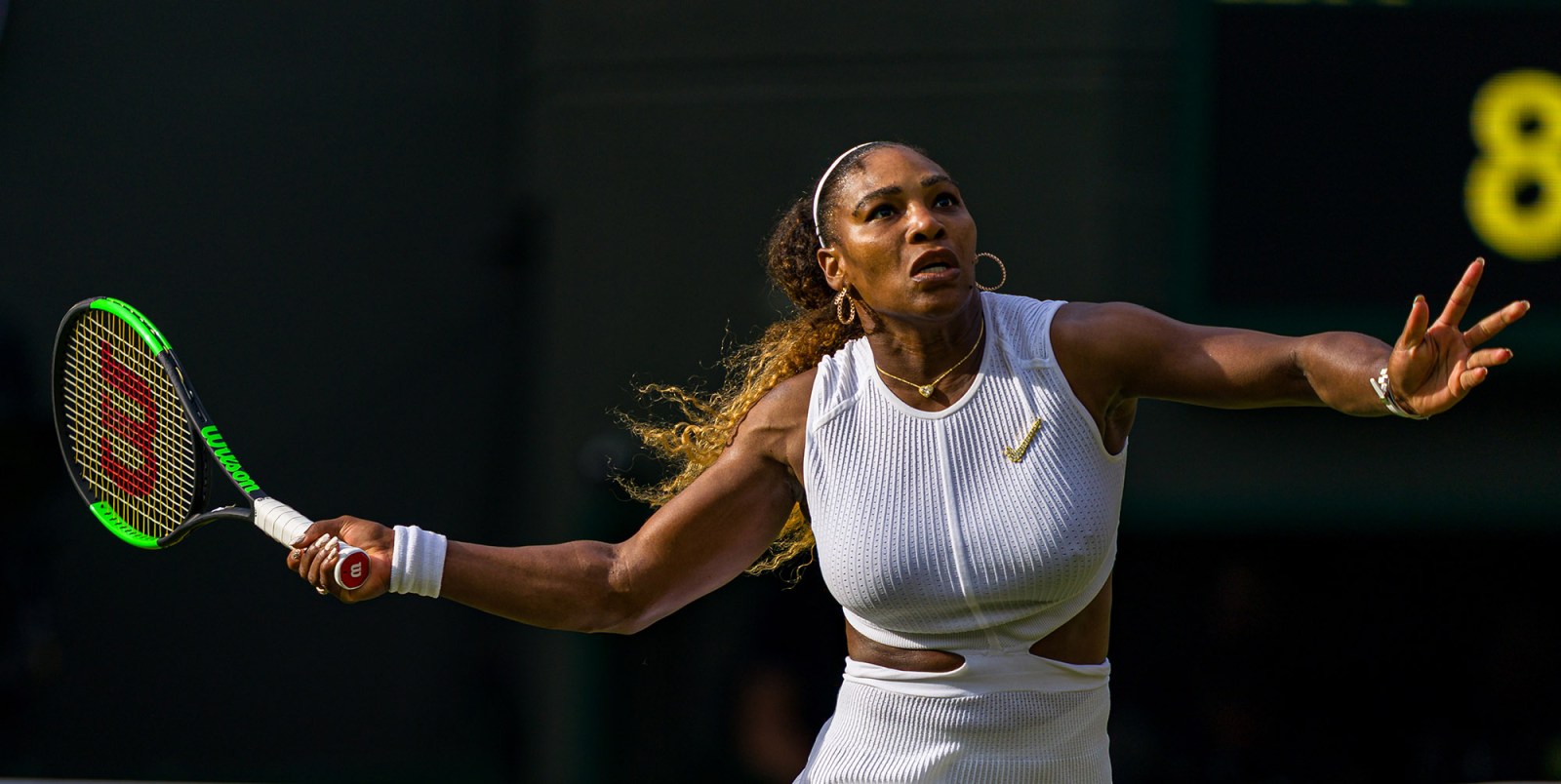 Serena Williams of the US plays a forehand during day four of Wimbledon 2019. (Photo: Andy Cheung / Getty Images)

They’ve wowed us and made us take notice where we might not have bothered to look before. These are the five greatest female athletes of the 21st century.

There will never be consensus about the greatest athletes of all time in one sport, let alone across all sports. Team performers are different from individual sports stars, but they share the common trait of elevating their professions to unthought-of heights. The elite also transcend sport because of their increasingly crucial roles in social justice causes.

With that in mind, we present the five greatest female athletes of the 21st century.

Serena Williams is a polarising figure, adored by many and disliked by some, for her apparent penchant for petulance when things don’t pan out as she would like.

Her victories have moulded her into an inspirational figure in the sport of tennis, especially to children. Last year Williams opened up about the struggles she has faced throughout her career, including discrimination.

“In short, it’s never been easy,” Williams wrote in an essay published in Harper’s Bazaar. “But then I think of the next girl who is going to come along who looks like me, and I hope, maybe, just maybe, my voice will help her.”

Williams has been ranked the number one player in the world on eight separate occasions. During her sixth reign on top, she held the ranking for 186 consecutive weeks, which tied Steffi Graf for longest all-time.

Serena and Venus Williams are considered pioneers of a new era for women in tennis that is focused on power.  In 2019, she was the only woman on the list of the world’s highest-paid athletes, according to Forbes.

Serena Williams has also won the Laureus World Sportswoman of the Year a record four times.

There might not be a more controversial athlete on the planet than Semenya – through no fault of her own. The multiple Olympic and world 800m champion has been the subject of debate, ridicule, racism and sexism. Through it all, she has maintained her dignity as her gender identity has been a subject of heated debate. She identifies as female, but her naturally elevated testosterone levels have been a source of controversy.

Semenya is an Olympic and World Championship gold medal winner over 800m, which is rare in itself. But having achieved the success she has, under the scrutiny she has had to endure, elevates her into a rare category of athlete.

After winning the 2009 World Championship 800m title, she was subjected to “sex verification testing” by the IAAF. This was done after she improved her best times by massive margins that year. It led to a public outcry and eventually Semenya was allowed to compete the following year.

She won the 800m at the 2011 World Championships and 2012 Olympics after Russian winner Mariya Savinova was retrospectively disqualified after failing doping tests. Semenya also claimed the 2016 Olympic gold and 2017 World Championship gold before the IAAF intervened again.

In a landmark case at the Court of Arbitration for Sport (CAS), the IAAF won a case to compel athletes such as Semenya with differences in sexual development (DSDs) to take medication to reduce their natural testosterone levels.

Athletes with testosterone levels higher than five nmol/litre would not be eligible to run distances from 400m to one mile (1600m). If they took the medication and reduced their testosterone to below that level for a period of six months, they would be eligible again.

The CAS tribunal panel’s ruling came with several caveats, including that it found the IAAF’s policy to be “discriminatory” but that it was a “necessary, reasonable and proportionate means of achieving the IAAF’s aim of preserving the integrity of female athletics in the restricted events”.

Semenya refused to take the medication, for several reasons, not least of which might be harmful side-effects. She has opted to rather focus on events such as the 200m, which do not fall into the penalised distances.

“I know that the IAAF’s regulations have always targeted me specifically,” Semenya said after the 2019 CAS ruling. “For a decade the IAAF has tried to slow me down, but this has actually made me stronger. The decision of the CAS will not hold me back. I will once again rise above and continue to inspire young women and athletes in South Africa and around the world.”

Megan Rapinoe is just another brilliant footballer in the conveyor belt of talent that has been produced by the United States women’s national team over the years. This includes the likes of Abby Wambach and Mia Hamm.

What sets Rapinoe apart is her activism. She is an advocate for numerous LGBTQ organisations and often uses her platform to speak out against social injustice. She is also an advocate for women in sports and equality.

This hunger for leadership is the reason the 35-year-old is co-captain of the US national team, alongside Alex Morgan and Carli Lloyd. She backs up her talking off the field by being just as loud on the field.

She helped the US to its second consecutive Fifa Women’s World Cup in 2019, scoring six goals for the Golden Boot and Golden Ball Awards. She was also on the 2015 team that won the Cup, as well as the 2012 Olympic team, which took home gold.

The Swedish golf sensation dominated the women’s game for more than a decade from 1995 to 2006. She makes this list because, even in isolation, her achievements in the early 21st century were staggering. She is also the only woman to shoot a mythical 59 in competition.

Sörenstam won 72 tournaments on the LPGA Tour, including 10 majors, eight of which were won between 2001 and 2006. She was the female equivalent of Tiger Woods and her best years overlapped with Woods’, which is perhaps why Sörenstam doesn’t always receive the global praise her record warrants.

After dominating the game in the late 1990s, which saw her win two majors and 18 titles, Sörenstam’s reign as LPGA queen was usurped by the likes of Karrie Webb at the turn of the century. As a result, Sörenstam started a punishing fitness regime and added muscle and power, which gave her an extra 18m length off the tee. It might sound like nothing, but it made a massive difference to her scoring and her success.

Sörenstam won eight times in the 2001 season and backed it up with a record-equalling 11 LPGA wins in 2002. For good measure she also won a tournament on the Ladies European Tour and in Australia, winning 13 of the 25 events she played that year. No golfer in the modern era, male or female, has achieved such a high winning percentage (52%).

In 2003 she won the British Open to complete the career Grand Slam of majors (which have changed in the women’s game, unlike the men’s) and was part of the European Team that won the Solheim Cup, the women’s version of the Ryder Cup.

In 2004 Sörenstam won her seventh LPGA Player of the Year title after winning another eight titles in 18 starts and the following year she won another 11 times globally. She was named player of the year for a record eighth time and also became the first player to win the same tournament five times in a row when she won the Mizuno Classic in Japan. And all this was against the backdrop of going through a divorce.

Her dominance tapered off after a successful 2006, which included her 10th and final major at the US Women’s Open. By the end of 2008, she retired at the age of 38, despite winning three titles on the LPGA that year.

US gymnastics sensation Simone Biles is a giant of sport, even if she is only 1.42m tall. Most casual gymnastics observers know only two names – Nadia Comaneci and Biles.

The diminutive 23-year-old Ohio native has won 30 world and Olympic medals in a career that has already spanned seven years at senior level. She should have been one of the main attractions at the 2020 Tokyo Olympics, but that will have to wait until 2021.

At the Rio Olympics in 2016, Biles lit up the Games with some jaw-dropping routines to win four gold medals (team, individual all-round, floor and vault) and one bronze (balance beam). She emerged from Rio as a global superstar and was compared to 1976 Olympic gymnastics star Comaneci.

At the 2019 World Championships Biles took the sport to new heights, helping the US win a fifth consecutive team gold medal. In the individual all-round final, Biles won gold with a score of 58.999, a record-setting 2.1 points ahead of second-place finisher Tang Xijing of China.

Her achievements are even more remarkable when considering she was one of the victims of sexual predator Larry Nassar, who was USA Gymnastics’ national team doctor. Nasser was accused of sexually abusing 250 girls over a 20 year period. He was sentenced to 125 years in prison in 2018.