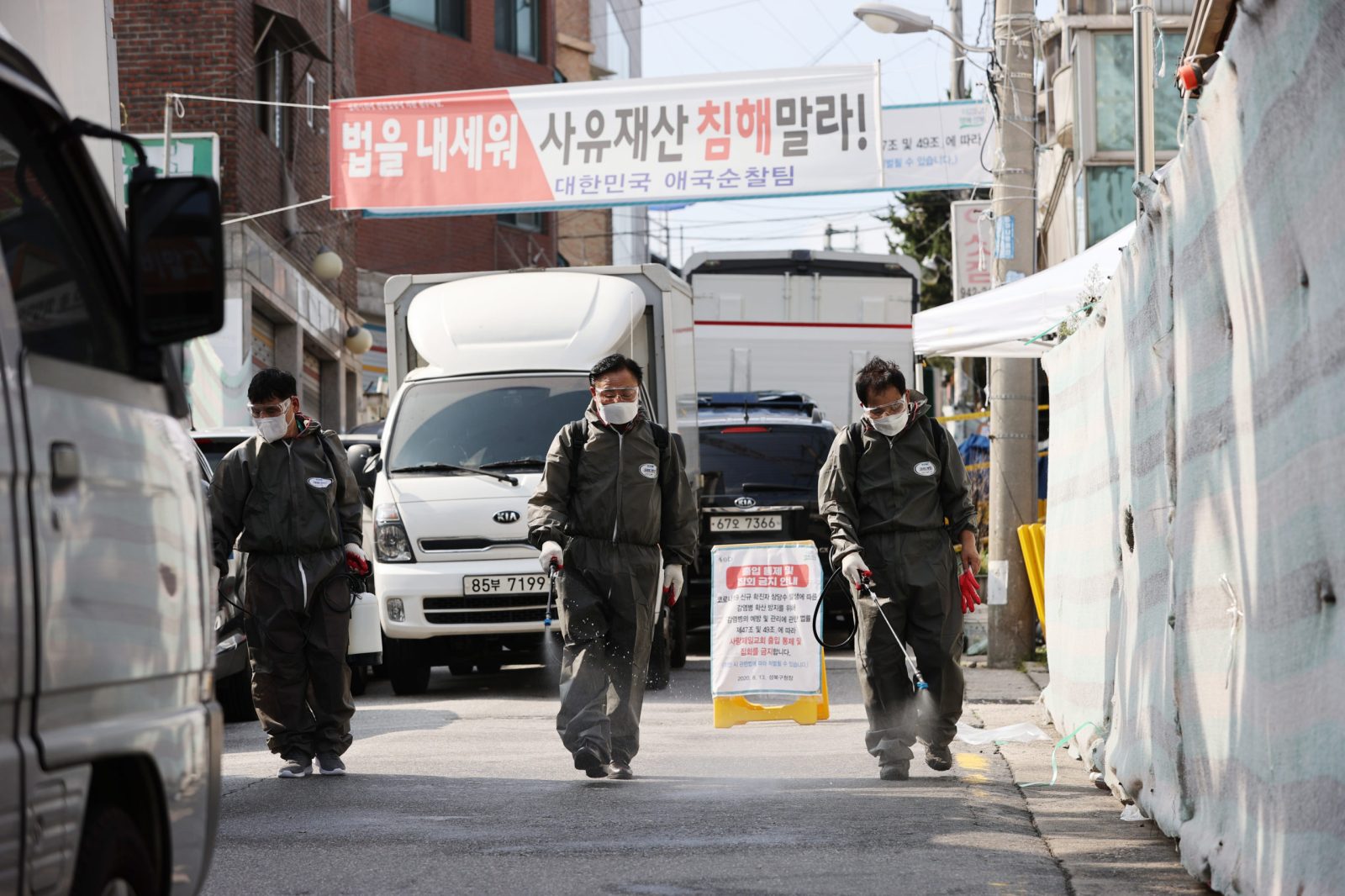 SEOUL, Aug 17 (Reuters) - South Korea warned on Monday of a looming novel coronavirus crisis as new outbreaks flared, including one linked to a church where more than 300 members of the congregation have been infected but hundreds more are reluctant to get tested.

The outbreak linked to the Sarang Jeil Church in Seoul is the country’s biggest in nearly six months and led to a tightening of social distancing rules on Sunday.

The Korea Centers for Disease Control and Prevention (KCDC) reported 197 new cases as of midnight on Saturday, mostly in the Seoul metropolitan area, marking the fourth day of a three-digit tally.

South Korea has been one of the world’s coronavirus mitigation success stories but it has nevertheless battled persistent spikes in infections. The latest cases brought its total infections to 15,515 including 305 deaths.

“We’re seeing the current situation as an initial stage of a large-scale transmission,” KCDC director Jeong Eun-kyeong told a briefing.

“We’re facing a crisis where if the current spread isn’t controlled, it would bring an exponential rise in cases, which could in turn lead to the collapse of our medical system and enormous economic damage.”

The outbreak at the Seoul church has revived fears seen in February when authorities struggled to contain an outbreak that emerged in a secretive Christian sect in the city of Daegu and became the country’s deadliest cluster.

As in the earlier case, authorities are facing some reluctance to cooperate and difficulty in tracking some of the members of the congregation.

Vice Health Minister Kim Gang-lip told reporters earlier the Presbyterian church had provided inaccurate lists of its 4,000 members. While 319 of them had tested positive, more than 600 who authorities want to see in isolation were unaccounted for.

“We’re very concerned,” Kim said, dismissing rumours that authorities wanted to round up church members and would record every test as positive regardless of the truth.

The church is led by a conservative activist, Reverend Jun Kwang-hoon, who has also been organising anti-government rallies calling for the ouster of liberal President Moon Jae-in, raising worry that the virus has been spreading at his protests too.

Jun, 64, took part in a protest on Saturday in defiance of a government order that all church members self-isolate and get tested.

The church did not respond to calls seeking comment. Jun said in an interview with a Christian media outlet that he complied with the rules but his church was a victim of “virus terror”.

A ban on church services was lifted in April though attendees are required to register and sit apart.

Kim said if the rate of new infections did not stabilise this week the government would tighten distancing, shut high-risk facilities and ban indoor meetings of 50 people or more and outdoor gatherings of 100 or more.

The health ministry has filed a complaint against Jun for violating quarantine rules and “obstructing” contact tracing by holding the Saturday rally and failing to provide a full list of members.

Jun faces earlier charges of violating election laws and had been banned from joining protests as a bail condition. A prosecutors’ office said on Sunday it wanted his bail revoked.

Among smaller clusters of cases, 131 infections have been traced to a Christian church in the city of Yongin and about 42 linked to a coffee outlet in the city of Paju. (Reporting by Hyonhee Shin Editing by Robert Birsel)