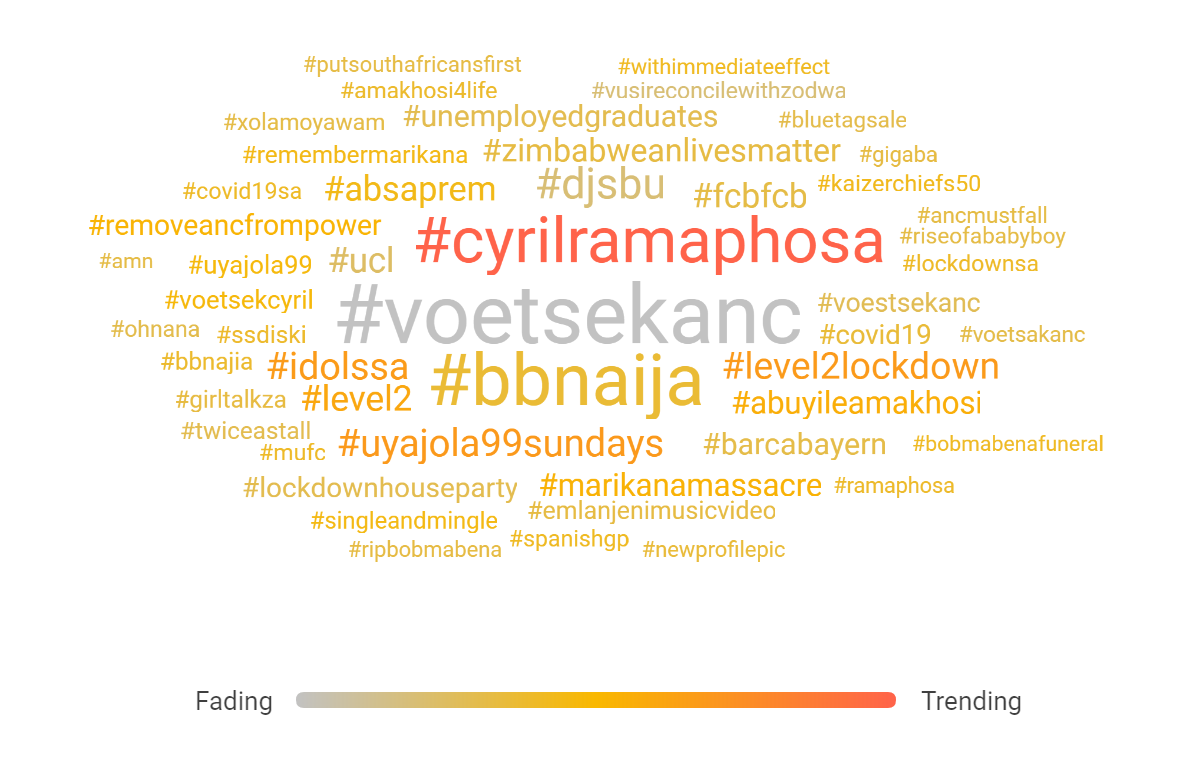 This is a summary of the trending, highest impact, and most active themes and their narratives related to social cohesion and division in South African public-domain social media conversations from 14 – 16 August 2020.

“Level 2” and “Ramaphosa to address nation” trended as two of the top 3 topics over the weekend.

As South Africans awaited new lockdown measures, @PresidencyZA announced at 1:47pm on Saturday that the President would address the nation at 8pm. A minute later, TV presenter Leanne Manas also tweeted about the President’s address. @mamakgolaganyo responded: “I still say, people that haven’t lost their loved ones through Covid19, will always ask for Lower levels of the Lockdown. We buried my sister this past Sunday and it was heartbreaking.”

As the President addressed the nation, @PresidencyZA tweeted details about Level 2 regulations, focusing on lifting the ban on alcohol and tobacco products and reopening gyms. The post was retweeted more than 1,400 times. 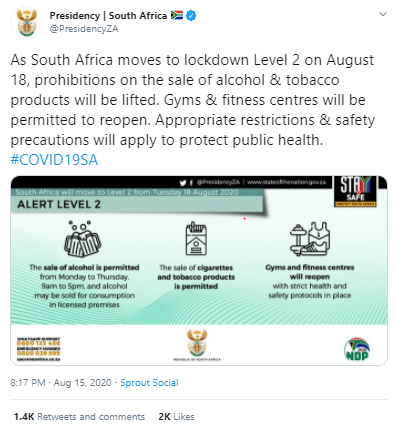 @kazaba_luc responded: “Mr President, how about events and weddings. We also need to make a living. You allow people to smoke and booze out their lives. We work in the wedding industry and we must make a living. I have spent 5 months without an income or salary and without food.” @Khosi_Mthethwa responded that if 50 people were allowed, they could take precautions. But @johnlafiesta explained: “There is no profit with 50 people unless the cost is tripled.”

Following the address, @JamilFarouk reminded people that contracting the virus was no small matter. He explained that it can affect the rest of your life and even if you are asymptomatic, you can pass the virus on. The post was retweeted more than 500 times and it received more than 700 likes. Responding to the tweet, @laverne_thom confirmed that she had tested positive for the virus in July 2020 and still had debilitating headaches. @lerrykins13 agreed: “Same here, the headaches are a nightmare.”

@NeoRapetsoa tweeted about the need to reopen the economy – people needed to play their part and not be irresponsible. This post was retweeted more than 200 times and received close to 1,000 likes by Monday morning. 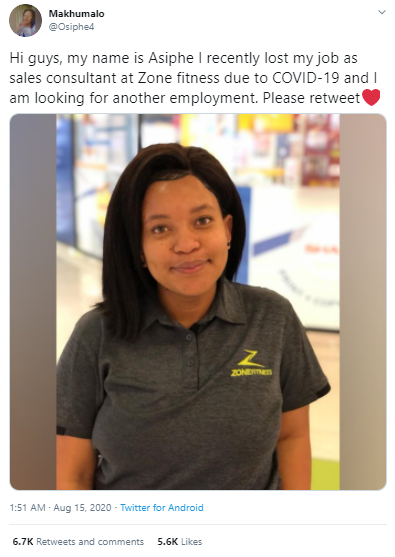 With unemployment at its highest, many South Africans are taking to social media to find work. @Osiphe4 tweeted: “Hi guys, my name is Asiphe. I recently lost my job as sales consultant at Zone fitness due to COVID-19 and I am looking for another employment. Please retweet.” The post was retweeted more than 6,000 times and received more than 5,000 likes by Monday. 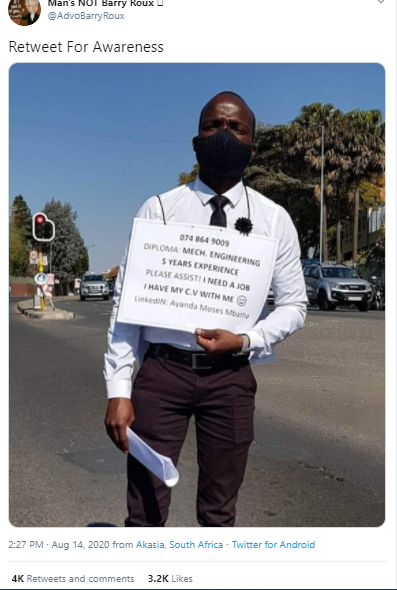 @AdvoBarryRoux tweeted an image of a man with a sign around his neck: “Diploma Mech Engineering 5 years experience. Please assist, I need a Job.” The post was retweeted more than 4,000 times and received over 3,000 likes.

A primary driver of conversation over the weekend, #voetsekANC trended with over 55,000 mentions, following growing allegations of tender corruption.

@RaimundoMontana posted: “It is clear now, more than ever, that the only way South Africa will RISE is if the ANC FALLS! #RemoveANCfromPower  #VoetsekANC.

Another user posted a news story titled “#Hawks swoop on warehouse in Mokopane seizing 42 boxes of illicit cigarettes” and urged the Hawks to reconsider their priorities. “There is a serial killer targeting Black women in KZN. Right now! Priorities guys. PLEASE!!! 😢”. The post hit home with many and received over 2,000 likes and 1,600 retweets.

Another news story highlighted corruption as the Hawks arrested an Eastern Cape municipal manager and two others for fraud, and money laundering to the value of R29-million. Twitter user @Mbusobanziii shared the story: “An arrest? In sataa? Linked to financial crime? RT for good luck.” Pessimism and frustration among South Africans was evident as the post was retweeted over 2,400 times and liked 1,600 times. A top comment stated: “I doubt this will even go anywhere. An arrest means nothing in South Africa.”

#MarikanaMassacre trended with over 12,000 mentions over the weekend that marked the 8th anniversary of the killing of mineworkers. The EFF posted: “The Economic Freedom Fighters marks the 8th Anniversary of the Marikana Massacre. On this day 34 miners were brutally murdered by an ANC-regime in defence of the mining industry and white-monopoly capital. In a perverted collusion between the state and Lonmin, a conspiracy to characterise workers demanding a living-wage as criminals was devised, and the sitting Deputy President of the time and Non-Executive Director of Lonmin, Cyril Ramaphosa called for concomitant action to be taken against workers.” 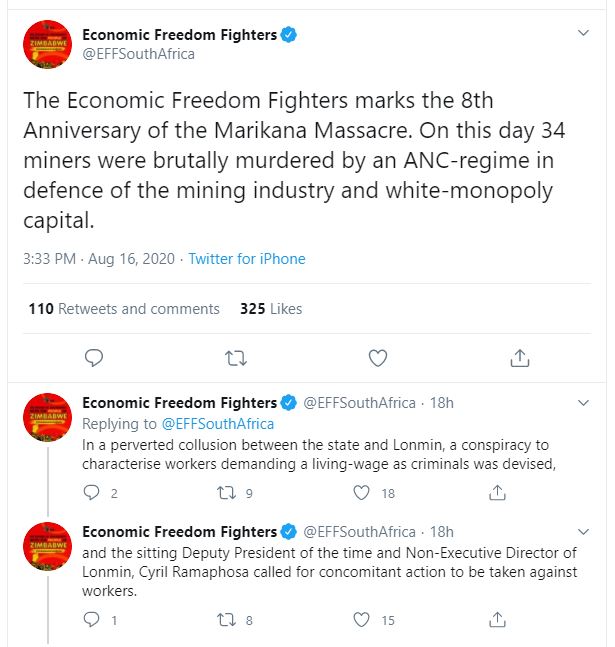 The SABC News Twitter account said: “Eight years after the Marikana shooting, President Cyril Ramaphosa is yet to visit the area as promised.” Foreign editor for the SABC, Sophie Mokoena posted: “My last comment  on Marikana. President Cyril Ramaphosa do the right thing as you have promised Mama Winnie Madikizela Mandela. I was there. Ntate Cyril Ramaphosa ensure that those who are responsible do implement the reparation process please please. Have a good day My President.” The tweet received nearly 550 likes over 200 retweets by Monday.

On Friday, @DanCorderOnAir shared a 10-part thread on the unequal treatment of black people in South Africa, referring to persistent claims that the country worked better under apartheid: “The truth is stuff worked if you were white. The state neglected black people. Here are the facts. Thread /1”. This tweet received over 1,100 retweets and 1,800 likes.

The next day @Sazi_Mo offered advice to black people seeking accommodation on AirBnB. The tweet read: “When booking an Airbnb in Cape Town it’s very important to check the reviews for black people who’ve stayed there before. If there aren’t any… have I got news for you.” This tweet got over 2,500 retweets and over 7,700 likes.

Conversations on race relations continued through the weekend. On Sunday, one Twitter user shared an opinion on the consequences of Zimbabwean land reform in this tweet: “still find it ironic that Black Zimbabweans kicked out all the… White people… and… then Millions of Zimbabweans ran across the border to South Africa to come and work for… White people.” This was retweeted 247 times and liked 709 times. 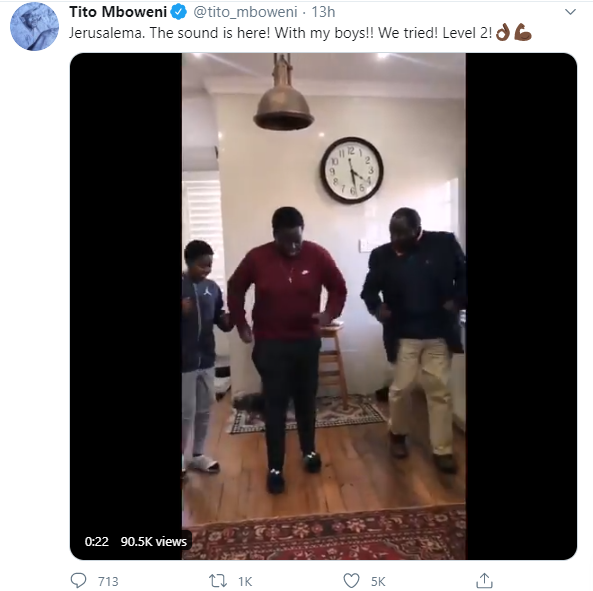 On a lighter note, Finance Minister @tito_mboweni shared a video of him trotting out dance moves with his sons on Sunday: “Jerusalema. The sound is here! With my boys!! We tried! Level 2!👌🏿💪🏿”. This was retweeted over 1,000 times and liked over 5,000 times by Monday. DM