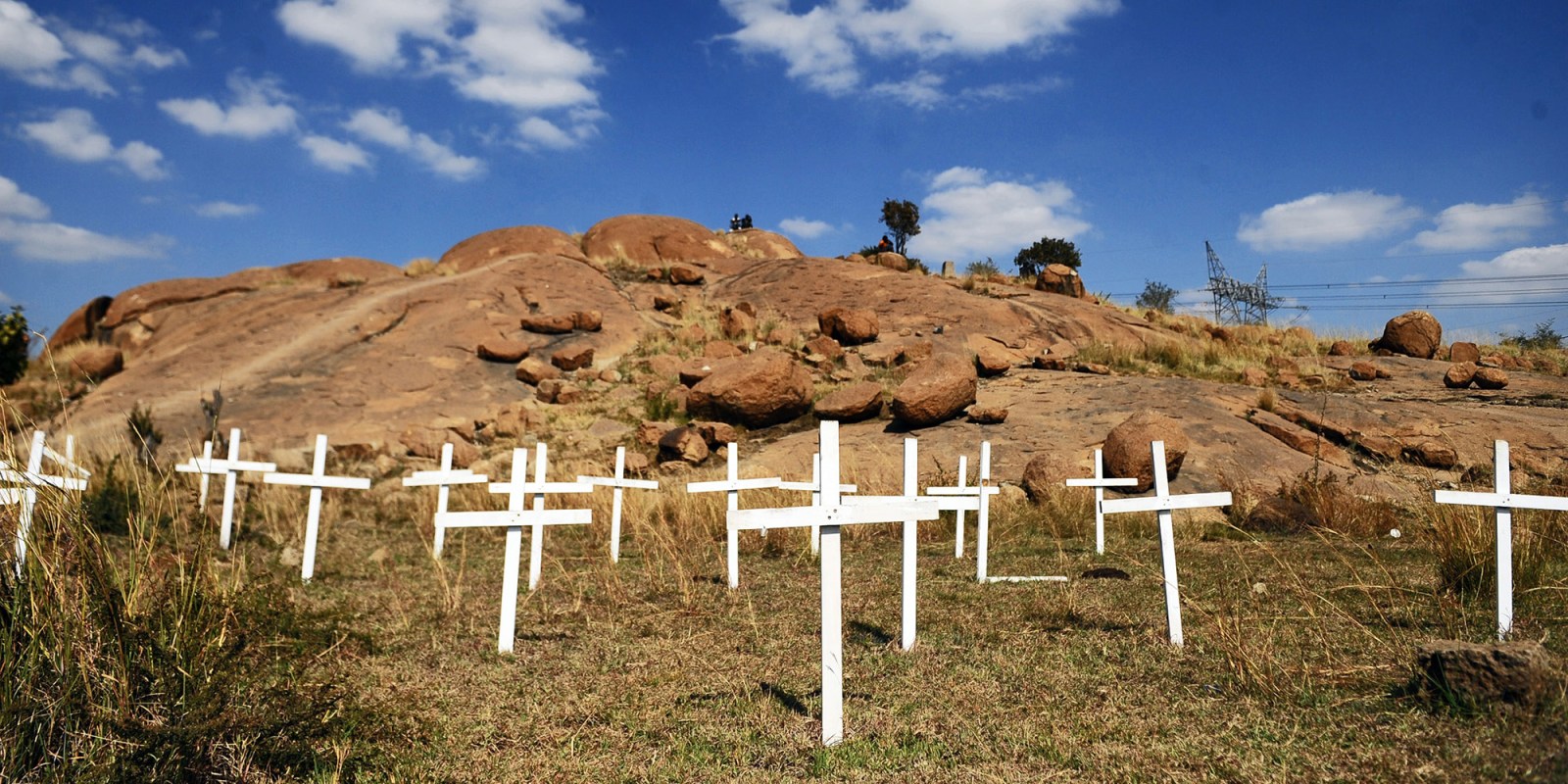 Crosses placed in 2012 for the 34 miners killed in the Marikana shooting in Rustenburg. (Photo: EPA / STR)

President Cyril Ramaphosa and his government must apologise for the Marikana Massacre, said speakers in Johannesburg as they gathered at an event hosted by Amcu to commemorate the lives lost at the hands of the SAPS eight years ago. Advocate Dali Mpofu said if the government and the president did not adhere to this, ‘they will meet us in court’.

“We want a human approach to this… we want ubuntu,” said advocate Dali Mpofu on Sunday 16 August, as family members and survivors gathered to commemorate those affected by the Marikana Massacre eight years ago.

The commemoration at the Gracepoint Methodist Church in Midrand, Johannesburg, honoured the 34 miners who were killed by police in two areas in Marikana on 16 August 2012.

The commemoration was hosted by the Association of Mineworkers and Construction Union (Amcu), a rival union to the National Union of Mineworkers (NUM), which had been the majority union at the mine at the time. Speakers at the commemoration included widows, survivors and Amcu officials. UDM leader Bantu Holomisa and One South Africa Movement leader Mmusi Maimane both appeared via video link, in adherence with Covid-19 gathering regulations.

Mpofu updated the Marikana widows and survivors on litigation that is underway. He acknowledged the sombre mood at the church, saying in previous commemorations the mood was elevated, but “this time, our spirits are low”. He said, “The battle is against forgetting. I have no doubt… the perpetrators are praying that we forget.”

Mpofu, who has been supporting the relatives of those killed and injured and their supporters since the massacre occurred, said the claims made by those injured and arrested by the police are currently being settled.

He said a legal team will take this matter up with the president immediately. Mpofu said the government has admitted it was wrong in the arrests and deaths and “all that is left is for them to pay the compensation”.

This apology and compensation must be done by 31 August, Mpofu said, “otherwise, on the 1st of September, they will meet us in court”. He said it was a “disgrace” that people have not yet been compensated and asked, “What kind of black government is this?”

Mpofu said all victims and survivors were owed emotional closure and their dignity.

At the time of the massacre Cyril Ramaphosa was a businessman and a non-executive director at Lonmin mine who was accused of using his influence with Police Minister Nathi Mthethwa to act against striking mineworkers. Lonmin has since sold the mine and it is now owned by Sibanye-Stillwater.

In 2012, during a hearing into the massacre, Mpofu said there had been an email from Ramaphosa to another person at Lonmin suggesting “concomitant action” against the miners. In the Farlam Commission report into the massacre, Ramaphosa was largely exonerated, as there was no “prima facie basis that Mr Ramaphosa is guilty of the crimes he is alleged to have committed”.

In 2017, while speaking to students at Rhodes University, Ramaphosa, who was at the time SA’s deputy president, was quoted by News24 as saying: “I have apologised and I do apologise that I did not use the appropriate language but I never had the intention to have the 34 other mineworkers killed.”

Delivering the keynote address on Sunday, Amcu president Joseph Mathunjwa said, “They [those responsible for the massacre] need to ask forgiveness from those whose lives they sought to destroy.”

Mathunjwa said they will no longer refer to the events in the Platinum Belt as the “Marikana Massacre”, but as the “Sibanye-Stillwater Massacre.

Mathunjwa said he wants the government to “introduce a tariff system to protect workers” as well as helping small businesses to grow the country’s economy. He called for the Constitution to be changed to allow voters to vote directly for their preferred presidential candidates to ensure accountability, as “they [elected officials] are only accountable to their political parties”.

The commemoration then cut to a live-stream from Marikana, where more Amcu members, victims and survivors laid wreaths at both sites where police shot the striking mineworkers.

Earlier this week, the Independent Police Investigative Directorate told Daily Maverick’s Greg Nicolson that six police officers have been charged in connection with the deaths that occurred on 13 August 2012.

The protests in Marikana started on 9 August 2012, following the walkout of miners when their employer, Lonmin, did not meet their demands. The next day, two miners were allegedly shot by NUM leaders. Between 12 and 14 August, ten people were killed in the area: two policemen, two security guards and six mineworkers. Then, on the 16th, 34 miners were shot by the police, with a further 78 injured.

Civil society organisation Right2Know said in a statement on Sunday that it was concerned that only a few people have stood trial. Thus far, no one has been charged for the killings on 16 August 2012.

“Whilst we appreciate that there are some who are facing prosecution, we remain concerned that the large chunk of those involved are not facing charges for their role in the massacre… we call on the NPA to speed up the prosecutions of all those implicated, especially all the police that IPID recommended be indicted. We have seen hardly anyone whatsoever being held to account for the massacre that remains a painful dent on our young democracy,” said Right2Know. DM