Death toll from attack on Mogadishu hotel rises to 16 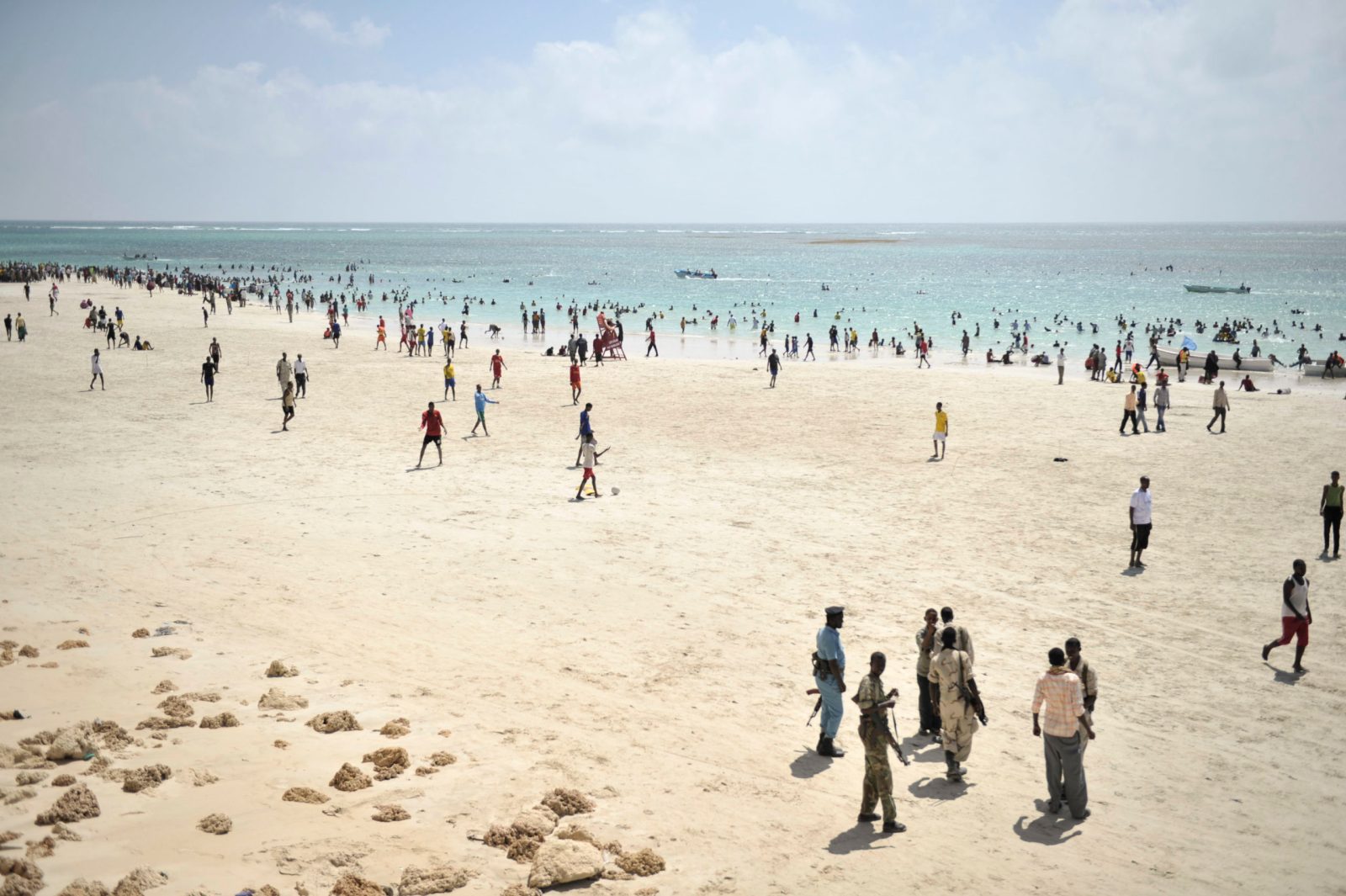 epa04049821 A handout picture made available by the African Union-United Nations Information Support Team (AU UN IST) shows residents of Mogadishu enjoy Lido beach, while police stand guard outside of a restaurant, in Mogadishu, Somalia, 31 January 2014. The Mogadishu lifeguards, consisting entirely of a volunteer force of fisherman, began patrolling Lido beach in September 2013 after a spate of drownings. Mogadishu's beaches have become a popular destination for the city's residents since al Shabab withdrew the majority of its militants from the city in 2011. EPA/TOBIN JONES / AU UN IST/ HANDOUT HANDOUT EDITORIAL USE ONLY

MOGADISHU, Aug 17 (Reuters) - At least 16 people were killed on Sunday when Islamist insurgents attacked a seaside hotel in Somalia's capital Mogadishu, a government spokesman said, with a witness describing the scene inside the compound as "like hell".

Al Shabaab militants launched a similar assault on a Somali military base on Monday in which at least five soldiers died.

The toll from the hotel attack included 11 victims and five assailants, Ismail Mukhtar Omar said in a tweet late on Sunday, adding: “Security forces lost one.”

Militants detonated a car bomb at the high-end Elite Hotel in Lido beach before opening fire with assault rifles.

Mohamed Ibrahim Moalimuu, who was present during the attack, told Reuters security at the hotel, which is owned by a government politician, was considered extremely tight, with two checkpoints inside the compound and two outside.

“No one can enter that area without a government ID card. It is impossible for car bombs or even civilian cars just to go in there,” Moalimuu said.

At the moment the car bomb exploded, he said, “there was a blanket of flame hovering over us … The hotel was like hell. Clouds of smoke, terrible exchange of gunfire, flames.”

Moalimuu was able to jump over a wall and escape on to the beach, he said, but the friend he was dining with was killed.

Footage of the security response shared with Reuters by a security source shows Somali soldiers helping guests climb down ropes strung from hotel windows, and jubilant soldiers chanting “Allahu Akbar” — “God is greatest” — over the bloodstained bodies of three men sprawled in a stairwell.

The hotel is owned by Abdullahi Mohamed Nor, a lawmaker and former finance minister, and is popular with government officials and members of the Somali diaspora.

Al Shabaab has been battling the central government since 2008. The insurgents want rule based their own strict interpretation of Islamic sharia law.

On Monday, five soldiers were killed after fighters from the group launched a car bomb and gun assault on a Somali military base in the Goofgaduud area, about 30 kilometres from the town of Baidoa in Somalia’s southwest.

Three soldiers were killed when a suicide car bomber rammed the gate to the base, Major Mohamed Aden, a military officer in Baidoa told Reuters.

Soldiers abandoned the base and al Shabaab fighters entered it, planting a booby-trap bomb on one of the dead men which killed two more soldiers when it exploded, he said.

Somalia has been embroiled in civil war since 1991, when clan warlords overthrew leader Mohamed Siad Barre and then turned on each other. (Reporting by Abdi Sheikh; Writing by Elias Biryabarema; Editing by Giles Elgood and Catherine Evans)