Comedian Marc Lottering to Cyril Ramaphosa: ‘What about the people?’ 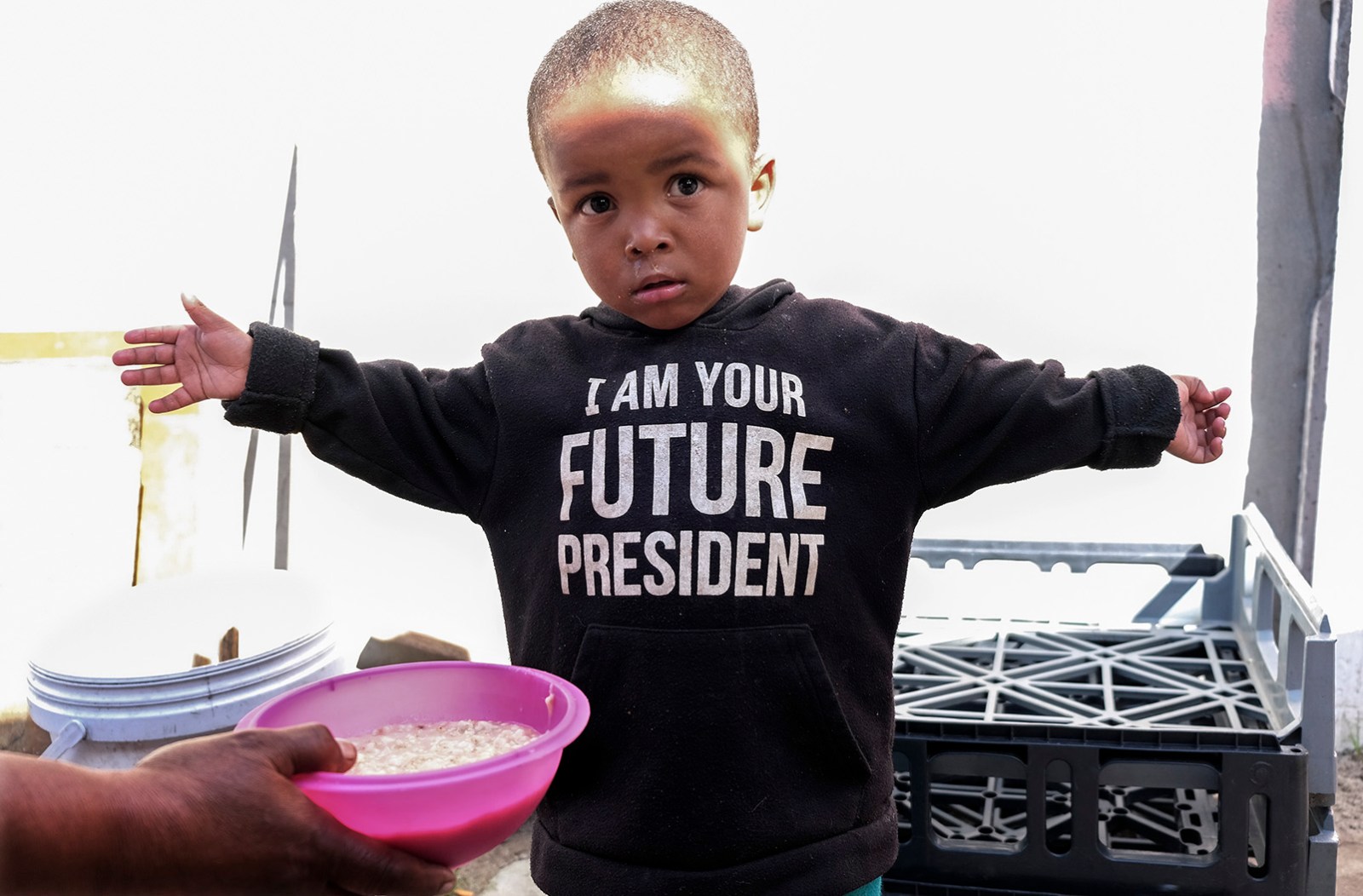 Inspired by the remarkable action of Joanie Fredericks, a Mitchells Plain community activist who has launched a campaign to take on the president in court, Marc Lottering penned a heart-breaking song – one of the most authentic and raw representations of South African’s hunger pandemic.

Turning into Joanie Fredericks’ street in Tafelsig, Mitchells Plain, nothing could have prepared me for the sight of a few hundred people waiting for a loaf of bread to see them through the day. It is a near-apocalyptic sight; undeniable evidence that we have failed in preventing the hunger pandemic that has devastated communities across the country.

This has been a daily reality for millions of South Africans since the start of the Covid-19 lockdown. From as early as 6am every morning, Fredericks sees the people arriving outside her gate. Having started the Tafelsig Mitchells Plain Community Action Network, together with Bernadette Morrison and Eloise Rossouw, as the first blows to the economy were taking place in March 2020, Fredericks’ house has become known by locals as the place where there is food.

Marc Lottering had warned me that a trip to Tafelsig is not easy on the heart. He had first gotten to know Fredericks when he saw her “Dear Mr President” Facebook video, in which she implored President Cyril Ramaphosa to seriously consider the plight of hungry South Africans nationwide.

“I’m a reluctant activist,” Lottering had told me. But having visited her home and seeing the situation himself, he could no longer stand by without lending a hand. The result is “What about the people?”, a song written by Lottering and sung by The Voice winner Craig Lucas.

Lucas sings the song with his eyes closed and his heart open, a painful lament that serves as a perfect soundtrack to the music video’s imagery. Fredericks and hundreds of community activists running feeding programmes around the country lend their voice, a powerful but horrifying montage. The image is of a nationwide community, burnt out but relentless and passionate, united in their cry for relief.

I make my way through the small crowd gathered outside Fredericks’ gate. Inside the yard, Fredericks and her colleagues are bustling. Crates of bread are moved around, a table is prepared, the chalk-line physical distancing marks are redrawn.

“It’s always chaos here,” Fredericks tells me, barely able to catch her breath before her phone rings. She’s off and I’m left with Nadeemah Jones, who is handing over a Baby Essentials care bag to Shahida Khan. “I’m the youngest great grandmother ever in my family,” Shahida says proudly as she accepts the warm blankets and baby clothes. She thanks Aunty Nadeemah and joins the crowd waiting for bread.

It is chaos, but it’s organised. The volunteers take their positions and the gate opens. “Distance!” Fredericks shouts, returning from her phone call. She storms out onto the street. “People!” she says, hands on hips. “Yes, Joanie!” the crowd replies. “We discussed this yesterday. We’re going to stand in a line, one metre apart, otherwise things out here are going to get rof and onbeskof.”

“We hear you, Joanie,” comes the murmur from the crowd and the physically distanced line is formed. Pensioners and disabled people to one side, women and children to the other, the rest will have to wait longer.

Inside the yard, the line begins to operate. As beneficiaries are ushered in, a loaf of bread is handed to each of them. It is a speedy and efficient operation, no time for small-talk, barely time for a thank you.

When the bread is done, the oats porridge is served to the children, who have been waiting with their containers. Some as young as three years old walk up to Jones and hold out their bowls, beaming with joy as they receive their meal for the day.

“Our community has been broken,” Fredericks tells me when she finally gets 10 minutes to rest. “I no longer sleep.” The economy before lockdown was dysfunctional, but now it is practically non-existent. Locals who relied on piecemeal employment have been retrenched en masse, having never had the means to build up savings.

Fredericks tells me that it was amazing to see private citizens, corporates and organisations opening their pockets to donate food. Most heartwarming, she says, were the community members who opened their pantries and gave their last cans of food. But this is not sustainable, she says.

The churches and NGOs who have supported the Mitchells Plain Community Action Network are also struggling financially, Fredericks says. Her blood boils as she recounts the recent revelations of looting by politicians and officials during lockdown, and evidence of ward councillors stealing food.

She is now preparing to launch a constitutional case to challenge the treatment of the South African people during lockdown. Since the release of the “What about the people?” video, Fredericks and her plea have gained nationwide attention. Even the United Nations have contacted her, she says. But still no direct response from the president.

In April 2020, Fredericks was also able to get in touch with Dr Neeta Behari, the head of Presidential Frontline Service Delivery Monitoring and Support. After demanding a meeting, she was told they are committed to meeting with her, but first have to “get the right stakeholders around the table”. Fredericks scoffs: “What table?” With virtual meetings taking place all the time, “you can sit on your toilet and Zoom me!”

Fredericks gave them an ultimatum: If by 4pm on Friday, 14 August, she did not receive a meeting date, she would announce her class-action lawsuit. The ultimatum passed with no confirmed date and that night, a press statement was released along with an address over Facebook:

“Based on the response that I received from the President’s office on Friday, it has left us with no choice but to file a Class Action lawsuit against the President as he is willing to allow hundreds and thousands, possibly millions; to starve to death.

“I want to assure you that I have not given up on trying to get a meeting with the President. Up until minutes before me doing this address, I have been trying to get some sort of an answer. Even a vague one… We will not die of hunger.” DM/MC