Cape Town is engaged in a war – against its own citizens 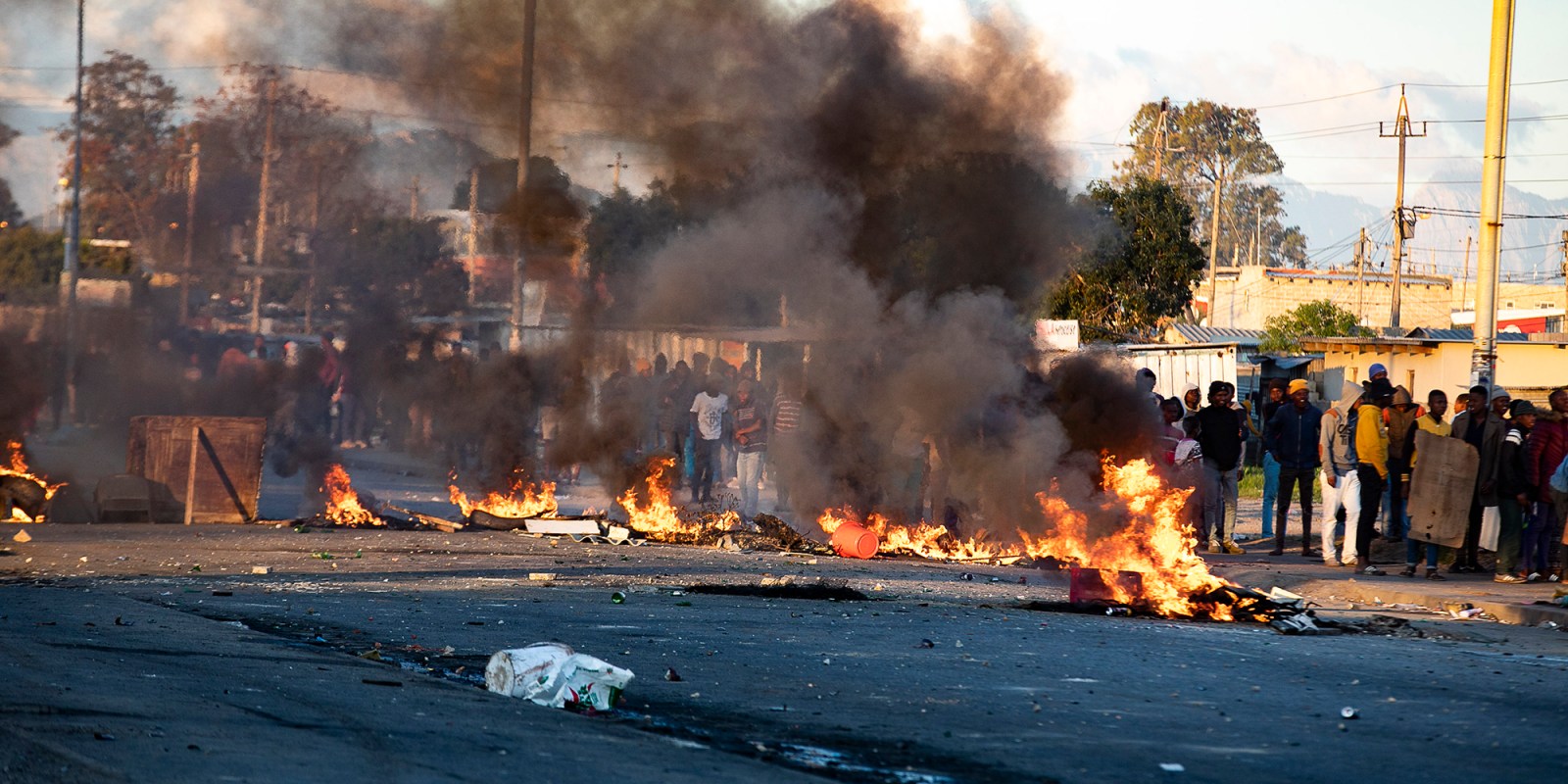 Words like ‘invasion’ and ‘siege’ are the words of war. The City of Cape Town’s militarised language in the context of land occupations positions the City’s own citizens as ‘the enemy’. When law enforcement agencies use disproportionate force to carry out an eviction, the public isn’t surprised because that’s how enemy forces are met.

On 30 July, City of Cape Town Mayor Dan Plato released a statement berating unlawful occupiers and claiming that Cape Town is “under siege with illegal land invasions”. In another statement, the mayor said the unlawful occupation of land is a “form of sabotage and terrorism” that is “threatening” to derail housing projects throughout the city. Over the past three weeks, these sentiments have been echoed by the City’s Mayoral Committee Members for Human Settlements, Malusi Booi, and Safety and Security, JP Smith.

“Under siege”, “invasion”, “threatening”, “sabotage”, “terrorism” – these are not ordinary words. They are words that the City has carefully chosen to construct a certain narrative. This narrative divides the poor and working-class into stark opposites – “law-abiding citizens” and “land invaders” – then pits these groups against each other. It positions the heavy-handed and humiliating actions of the City’s Metro Police and Anti-Land Invasion Unit as the “necessary” actions of reluctant heroes who must save citizens from “criminality”. It tells the story of a city under attack.

The mayor’s words expose what many already know: the City is at war with the poor and working-class – and it is weaponising words to win its battles.

While the term “land invader” is still widely used by government officials and in the media, it is a loaded term, reminiscent of the apartheid-era legal order. The apartheid government’s legal framework systematically drove black people off their land and limited their ability to secure tenure particularly in urban spaces. Opportunities were concentrated in the cities, but black people had to carry passbooks simply to be there. Laws like the Prevention of Illegal Squatting Act (PISA) made it easy for landowners to obtain eviction orders. Laws like PISA were therefore essential to the success of apartheid as they did a lot of the work of racial segregation.

The Constitution was adopted to rectify these historical injustices by providing that no one may be evicted without a court order made after considering all the relevant circumstances, thereby protecting the rights of unlawful occupiers. In fact, section 26 of the Constitution and the Prevention of Illegal Eviction and Unlawful Occupation of Land Act (PIE) not only repealed apartheid laws, but inverted them. Instead of criminalising black people who had been stripped of land for needing somewhere to live, PIE recognised that occupation is sometimes necessary for survival and that all occupiers deserve some form of legal protection, regardless of the legal status of their occupation.

For this reason, the law now requires that unlawful occupiers be treated with “dignity and respect”, not as “obnoxious social nuisances”. For this reason, the Constitutional Court has heavily criticised the use of the term “land invaders” to refer to occupiers, saying “this description of human beings… detracts from the humanity of the occupiers, is emotive and judgmental and comes close to criminalising the occupiers”.

The term “land invaders” has various built-in assumptions. It assumes, as Mayor Plato, JP Smith and Malusi Booi have also expressly stated, that land occupations are “orchestrated”. This implies that the people occupying land are “organised”, “politically motivated” and “opportunistic”. These are not novel claims, government officials have insinuated that poor and working-class people have been trying to “cheat the system” for decades. As S’bu Zikode, the chairperson of social movement Abahlali baseMjondolo, has said, “we have been called all sorts of names: Third Force, agent provocateurs and counter-revolutionaries.”

Labelling unlawful occupiers this way allows the government to disregard the underlying concerns raised by the occupation of land.

“Those in power are blind to our suffering because they don’t understand what it is like to live in a shack,” Zikode continues. “They must come with us while we look for work; they must chase away the rats and keep the children from knocking over the candles.”

It also allows the City to avoid meaningfully engaging with occupiers or incorporating their concerns into formal democratic processes. Mayor Plato uses these claims to delegitimise land occupiers:

“I have also noted some reports about illegal land invaders and their self-appointed ‘leaders’ wanting to ‘negotiate’ with the authorities. There is nothing to negotiate with land invaders.”

The impact of language can be seen in the severe police brutality against occupiers in Cape Town and Durban, and even the massacre of mineworkers at Marikana – violence that was aided by dehumanising language.

The fact of the matter is that the City of Cape Town has failed to address the housing backlog that has been in existence for years. Instead of addressing this issue, officials like JP Smith, Malusi Booi and Dan Plato are blaming the poor for being poor. It is very sad that we have a municipality that uses armed forces such as the Law Enforcement and Anti Land Invasion Unit in post-apartheid South Africa.

The term “land invader” also depicts occupiers as “criminals”. But viewing occupiers as criminals fails to recognise the context within which people occupy land – namely, generations of dispossession and a systemic failure on the part of the government to deliver on the promise of a functioning state-subsidised housing programme. This context is exactly why unlawful occupiers were granted legal protection by the Constitution, and why the unlawful occupation of land was decriminalised in 1996. It is why PIE makes it a criminal offence to evict a person or demolish their home without a court order authorising you to do so. Isn’t it ironic then that the City says that unlawful occupiers are criminals, when they are the ones acting illegally?

Plato uses terms like “land invaders” and “land grabs” to disguise the fact that the vast majority of people who occupy vacant land do so out of necessity, often exactly because they have been “waiting patiently” for housing or access to land that has never materialised. With the onset of a pandemic in which the home is our first line of defence, facing loss of income and unlawful evictions, the 70 years our City estimates it will take to work through the housing backlog may simply be too long to wait.

Words like “invasion” and “siege” are the words of war. The City’s militarised language in the context of land occupations positions the City’s own citizens as “the enemy” – the same citizens that it relies on for votes during elections.

Rejecting this isn’t just about semantics or political correctness. Words carry power. The assumptions and associations they invoke can confuse, mislead and obfuscate. They can shape a story.

So, when the City says “invaders” are “organised”, “criminal” and “self-interested”, the public is willing to accept it, because those associations are already implicit in the name. And when law enforcement employs disproportionate force to carry out an eviction, the public isn’t surprised because that’s how enemy forces are met. By using this language, the City escapes scrutiny for its unjustified use of violence to suppress community resistance and evades uncomfortable questions about its failure to respond to the looming housing affordability crisis.

The impact of language can be seen in the severe police brutality against occupiers in Cape Town and Durban, and even the massacre of mineworkers at Marikana – violence that was aided by dehumanising language.

We should always ask: what story are we being told, and why? In the context of land, terms like “land invader” convey subtle prejudices and hide the hypocrisy of the City’s own criminal behaviour in tearing down people’s homes. After all, it’s easier to treat people badly when you’ve dehumanised them in the eyes of the public. But as the public, we can demand better, particularly scrutinising the stories told by state officials. Foreign armies invade. But South Africa’s history is marred by decades of trying to make foreigners of its own citizens, so we should not accept terms like “land invader” as part of the lexicon of our democratic dispensation based on freedom, equality and human dignity.

At the end of the day, there are no “land invaders” or “unlawful occupiers”, there are just humans trying to survive as best they can. DM

Michael Clark is a researcher, Kyla Hazell is a popular educator and Thapelo Mohapi is an organiser at Ndifuna Ukwazi.