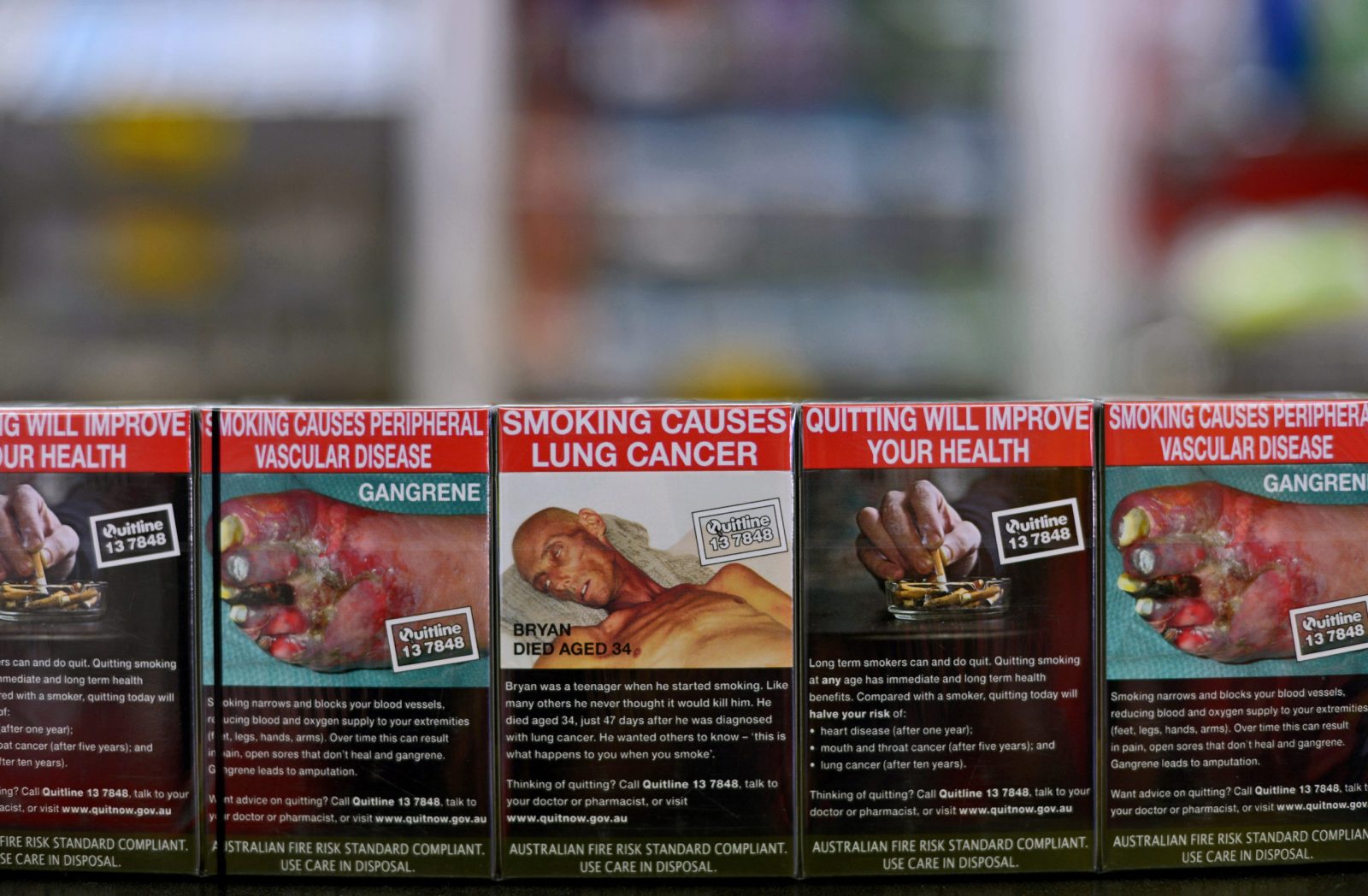 Packs of Philip Morris International Inc. Marlboro Menthol cigarettes in the new packaging are arranged for a photograph at a tobacco store in Melbourne, Australia, on Monday, Oct. 1, 2012. Photographer: Carla Gottgens/Bloomberg via Getty Images

Now that the World Trade Organisation has ruled that plain packaging of tobacco products does not violate trade rules, the door is open for South Africa to go ahead with stricter controls.

The World Trade Organisation’s (WTO) Appellate body recently confirmed that Australia’s tobacco plain-packaging measures are in compliance with trade rules and obligations; laying to rest all concerns that the measures may be in conflict with WTO law.

The WTO Appellate body found that plain packaging measures are suitable to reduce the appeal of tobacco products, enhance the effectiveness of health warnings, and reduce the ability of packaging features to mislead consumers.

This serves as a green light for South Africa’s Control of Tobacco Products and Electronic Delivery Systems Bill which introduces tobacco plain packaging measures. It also provides valuable lessons not only for the tobacco control community, but for the entire public health community.

Plain packaging measures aim to restrict the advertising and promotion of tobacco products. As noted by Philip Morris International executive Mark Hulit, the “final communication vehicle with our smoker is the pack itself… when you don’t have anything else — our packaging is our marketing”.

The measure involves the removal of all graphic design elements, logos and non-word marks on all tobacco packaging and products; only the brand names are permitted. The result will be a uniform presentation of all tobacco packages.

Global evidence pre- and post-implementation shows that these measures are apt to contribute to its objectives. A 2014 study undertaken at the University of Pretoria noted a higher response rate to pictorial warning labels than to word warnings. In the UK evidence shows that people are more likely to notice and read the health warnings closely, think about the risks of smoking and think of quitting. Post-implementation evidence from Australia shows that the regulations have statistically significantly reduced the appeal of cigarettes, with an increased awareness and an increase in quitline calls and quit attempts.

The government needs not recreate evidence to defend tobacco control policy; the World Health Organisation’s Framework Convention on Tobacco Control (FCTC) has been used as the basis for introducing plain-packaging measures. All FCTC measures are evidence-based and reflect global consensus on best practice in curbing the tobacco epidemic.

We have already witnessed the critical role of the FCTC back in 2012, when British American Tobacco South Africa challenged the introduction of a prohibition of the advertising or promotion of tobacco products. The South African Supreme Court of Appeal dismissed this challenge and held that the FCTC provides guidelines when considering what steps to take to deal with risks posed by tobacco use.

When policy measures are challenged, usually the plaintiff will show that less restrictive alternative measures can be used to equally achieve the same objective. The WTO found that plain-packaging measures form part of a comprehensive policy, as such a complementary measure cannot be raised as an available alternative measure. Simply put, educational campaigns or text warnings cannot be raised as alternatives to plain-packaging measures. They are complementary and form part of comprehensive policy as recommended by the FCTC.

Predominantly, the WTO promotes trade and economic interest. If a measure is inconsistent with WTO rules it has to be removed or adjusted, otherwise the member country implementing the measure will face retaliatory actions. The WTO has been criticised for its impact on regulatory autonomy, but in this case, it has shown once more that in some instances trade and economic interests can be superseded by public health policy.

The WTO has stated that “health concerns can take precedence over trade issues. If necessary, governments may put aside WTO commitments in order to protect human life”. Human health has been recognised as being important to the highest degree and South Africa as a WTO member is allowed to take measures to protect health — including implementing plain packaging as part of effective tobacco control policy.

The WTO has found that the measures are not in violation of trademark obligations under the WTO Agreement on Trade-Related Aspects of Intellectual Property Rights (TRIPS). It concluded that TRIPS only provides for the right to stop unauthorised third parties from using an identical or similar trademark — it therefore provides protection against free-riding and or imitation; but does not provide trademark owners with the right to use the mark.

Based on the evidence submitted in this case, with the backing of the FCTC, it also found that the measures pursued legitimate objectives and were a justified restriction on trademark use. Encumbrances on trademark use can be allowed if justified.

Plain packaging measures have been tried, tested and emerged victorious

Litigation is commonly used to deter countries from implementing tobacco control policy, and threats of litigation have led to regulatory delays and watering down of legislation. Plain packaging measures have been challenged by the tobacco companies in different countries (including France and Australia), by investment tribunals and under the WTO dispute settlement system; and may also be challenged in South Africa.

Back in 2012, when Australia implemented tobacco plain-packaging measures, it was the only country to do so, showing that a country can successfully pursue unprecedented evidence-based public health measures. Since then more than 10 countries have now introduced plain-packaging measures as part of a comprehensive tobacco control policy.

In 2012, the high court of Australia dismissed the plain-packaging challenge, finding that the measures did not amount to acquisition of property. One of the judges highlighted that a key reason why tobacco companies objected to plain-packaging legislation was that this could extinguish the advertising and promotional functions of the trademarks.

In 2016, the United Kingdom High Court and Court of Appeal also dismissed challenges to plain-packaging measures. High Court Justice Green found that the evidence tendered by the tobacco industry, in that case, was below international standards, as it was not peer-reviewed or “benchmarked against internal documents” and was not verifiable.

Pursuing public health is a legitimate goal and the law should be used to facilitate and promote the realisation of the highest attainable standard of health. The government should not be dissuaded from introducing public health policy that is well designed, evidence-based, effective and non-discriminatory, by threats of litigation either at local or international tribunals. Lessons should be drawn from litigation around the world.

The measures introduced by the Tobacco Bill are evidence-based, they will bring policy closer to the FCTC and will play a key role in reducing tobacco prevalence. DM

Dr Sharon Nyatsanza is project and communications manager and Dr Savera Kalideen executive director of the National Council Against Smoking.