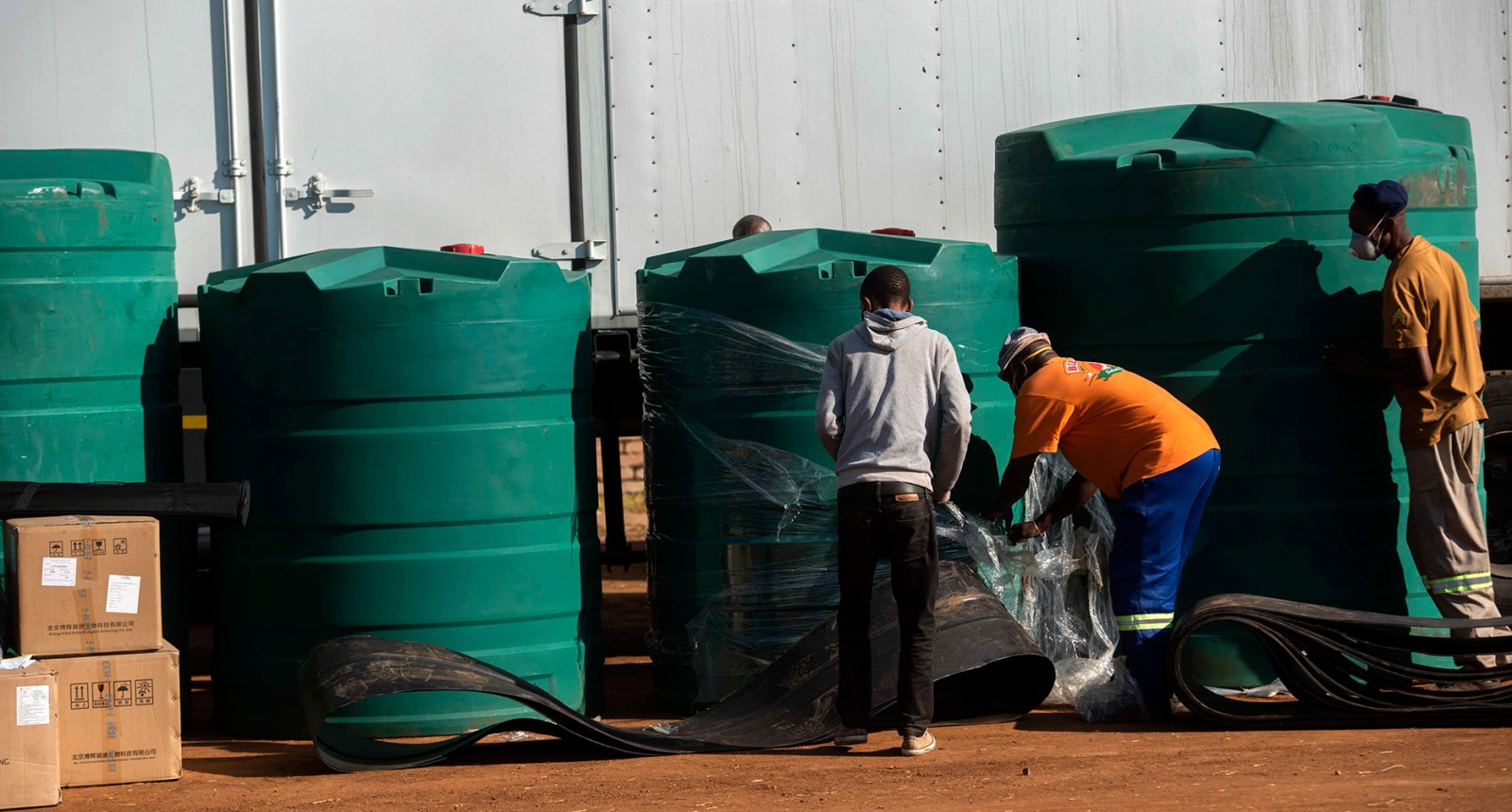 Communities are often well placed to assess whether a service is being delivered or not. If the municipality is transparent about what it has procured, communities can assist it in holding the service provider accountable, say the writers. (Photo: Gallo Images / Alet Pretorius)

Despite numerous laws and regulations that govern how municipalities must procure goods and services, widespread corruption happens in the form of a duly appointed service provider underperforming on a contract. By working closely with affected communities and by publishing all relevant contract specifications and information, service providers can be monitored and held accountable.

The Covid-19 procurement scandals across government are obscene. Too many departments and municipalities appointed inexperienced shell companies to deliver goods or services related to Covid-19. Companies led by relatives or friends of officials or politicians were favoured for contracts. It seems that being politically connected helps to score lucrative deals. Disturbingly, many municipalities are haplessly bleeding much-needed funds by being overcharged.

This is in sharp contrast with the plethora of rules on how municipalities must procure goods and services. There is a thick web of rules on procurement in the Constitution, in the Municipal Finance Management Act (MFMA), regulations in terms of the MFMA, National Treasury circulars and municipal policies.

That is why municipal procurement practice must be less inward-focused. Yes, oversight by and over municipalities must continue and be strengthened. However, it is not enough. Municipalities must partner with the public and with communities, and be more transparent about what and how they procure, particularly when it relates to essential services such as water, sanitation, electricity and refuse removal.

Right now, much of the media attention is focused on how service providers are appointed and what they charge. Who was appointed? Was due process followed? Was the appointed company “connected”? Were the BEE rules abused? Are they overcharging? The media, civil society and government itself are demanding answers and want an end to impunity.

There is a further aspect that is equally important. Because, even if the rules are followed and the award seems legitimate, the real test follows afterwards, namely: does the service provider actually deliver? Corruption often manifests itself when a (duly appointed) service provider underperforms on a contract and gets away with it.

For example, a housing company is awarded a contract to build 200 homes, but builds only 150. The company has an “ally” within the municipal administration who signs a document stating that all 200 homes were built, and the company is paid in full. The community is left wondering what happened, but it does not know what was agreed between the municipality and the company. The auditor-general may detect the problem 18 months later and flag it, but more often than not these schemes happen with impunity.

As a result, the services promised to the community (for example, the building of houses, resurfacing of a road, delivery of water tanks, regular cleaning of portable toilets, or street lighting) are not provided. A well-functioning municipality has systems in place to detect and address these anomalies. However, too often they don’t, and even if they do, they will miss some of these corrupt schemes.

Communities are often well placed to assess whether a service is being delivered or not. If the municipality is transparent about what it has procured, communities can assist it in holding the service provider accountable.

We argue that transparency in procurement must not be limited to the award and the contract value.

Below we list some of the key documents that municipalities should publish to enable communities to hold service providers accountable. Many of those must be published anyway, as per National Treasury MFMA circulars 62 and 83.

In the bid specifications, the municipality sets out the goods or services that it is looking for and invites proposals. For example, the specifications for a tender for the supply and fitting of water tanks would stipulate the number, size and calibre of tanks; the nature of the surface where they are going to be fitted or stationed; and the date by which they should have been delivered and/or fitted.

The problem is that municipalities often publish standard municipal bid documents and the detailed bid specifications only in order to appoint a service provider. After the contract is awarded, the information disappears. However, the actual project often runs for many months or even years. After some time, it is only the company and the municipality that have access to the original specifications. This makes it hard for communities to track whether the project is being carried out as intended.

Publication of these is not a new requirement. MFMA Circular 62 instructs municipalities to publish bid specifications on its tender portal and keep them there.

Publish the name of the company that won the tender

It goes without saying that municipalities must publish the details of who was awarded the contract. MFMA Circular 62 instructs them to do so within five working days after the award. Other relevant details which should be published include the value of the contract and the contract period. This will assist communities to know who the contractors are that are supposed to deliver the service in their area, and when such services will be delivered.

When a tender is awarded, it doesn’t mean that a detailed project plan will immediately be available. After the award, the municipality and the company will often negotiate the details of the project and a delivery schedule will be drawn up. These details are crucial for communities.

In our example of the water tanks, the delivery plan should disclose information such as the areas to be serviced with tanks, and how often the tanks are going to be filled up and serviced.

Yet these details are seldom published. The information is held by the municipality and by the service provider, leaving the beneficiary community in the dark as to what was agreed exactly, and what service they should expect. Again, it is crucial that this information remains accessible for the duration of the contract.

Publish what was considered before payment was made

The contract will provide criteria for the service provider to be paid. The municipality’s finance department will pay out, but only if prompted to do so by a line department that confirms that the company has indeed delivered. It could be that the company has colluded with an insider in that department. It may also be that the relevant officials are somehow hoodwinked into believing the delivery was adequate, even when it was not. The finance department then receives the documentation to enable it to pay and the money goes out the door. The paper trail is perfect.

However, the community that was supposed to benefit from the service is left bewildered because it sees that delivery was inadequate or absent. For example, the company only services the tanks once a week, instead of the agreed-upon twice a week, or it surreptitiously fills tanks only halfway.

The publication of documents such as work completion certificates, timesheets and invoices helps communities to compare what is on paper with what actually happens on the ground. If there is no access to these documents, communities do not know what questions to ask. This is why these documents must be made public.

It is not uncommon for a municipal contract for goods or services to be extended or amended. Circumstances on the ground may dictate this.

The emergency nature of procurement under Covid-19 has also necessitated deviations from normal procurement procedures. These deviations enabled swift action, but also proved a fertile ground for corruption. Municipalities must, therefore, publish extensions, variations and deviations of their procurement contracts so that communities can compare these with what is happening on the ground.

MFMA Circular No 83 requires these procurement decisions to be published within seven working days.

The procurement scandals will not come to an end if we only rely on the government’s own rules and oversight. Very often, the thieves are simply too good at hiding their manipulation from that very system. However, if municipalities publish key procurement information, and partner with communities to assess whether service providers actually deliver, the thieves will have nowhere to hide. DM/MC

Jaap de Visser is the director of the Dullah Omar Institute, University of the Western Cape. Tinashe Chigwata is a senior researcher there.

This article is part of a project of the Dullah Omar Institute and the International Budget Partnership South Africa on transparency in municipal governance during Covid-19. For more information see here.