You can gym, go on holiday, buy alcohol and smokes too. But there are still thousands of infections happening every day.

Covid-19 is likely peaking in South Africa, President Cyril Ramaphosa announced late on Saturday night as he lifted two of the most unpopular lockdown measures – the bans on alcohol and cigarettes.

From midnight on Monday, South Africa will move to Level 2 lockdown. In addition, by next week you can go to the gym again and travel across your provincial borders on holiday. You can’t travel abroad yet, though, as international travel other than for essential needs is still ruled out.

No matter what you do, you need to be home or inside by 10 pm – the curfew stands until 4 am every morning. Ramaphosa took the brakes off most of the lockdown as the economy has hit the skids with an additional three million people losing their jobs or their livelihoods, taking the total number of unemployed people to a likely 13-million people. The government now pays out 22-million social grants a month to keep the wolf from the national door.

Things are bad and Ramaphosa and his team knew this as they moved most of the remaining obstacles out of the way of opening. The Covid-19 numbers aided that decision.

Pandemic slows as surge ends and the curve flattens

Dr Ridhwaan Suliman, of the CSIR but speaking in his personal capacity, says that in the various ways that you use to tally the pandemic’s journey to South Africa, “it is a real decline – it gives confidence that we have reached a peak”.  Seven-day rolling averages of infections are down from an average of 12,000 cases to about 5,000 a day now.

“A lot of South Africans have been sceptical because test (numbers) have also come down,” says Suliman but he says a different factor suggests the decline is real. 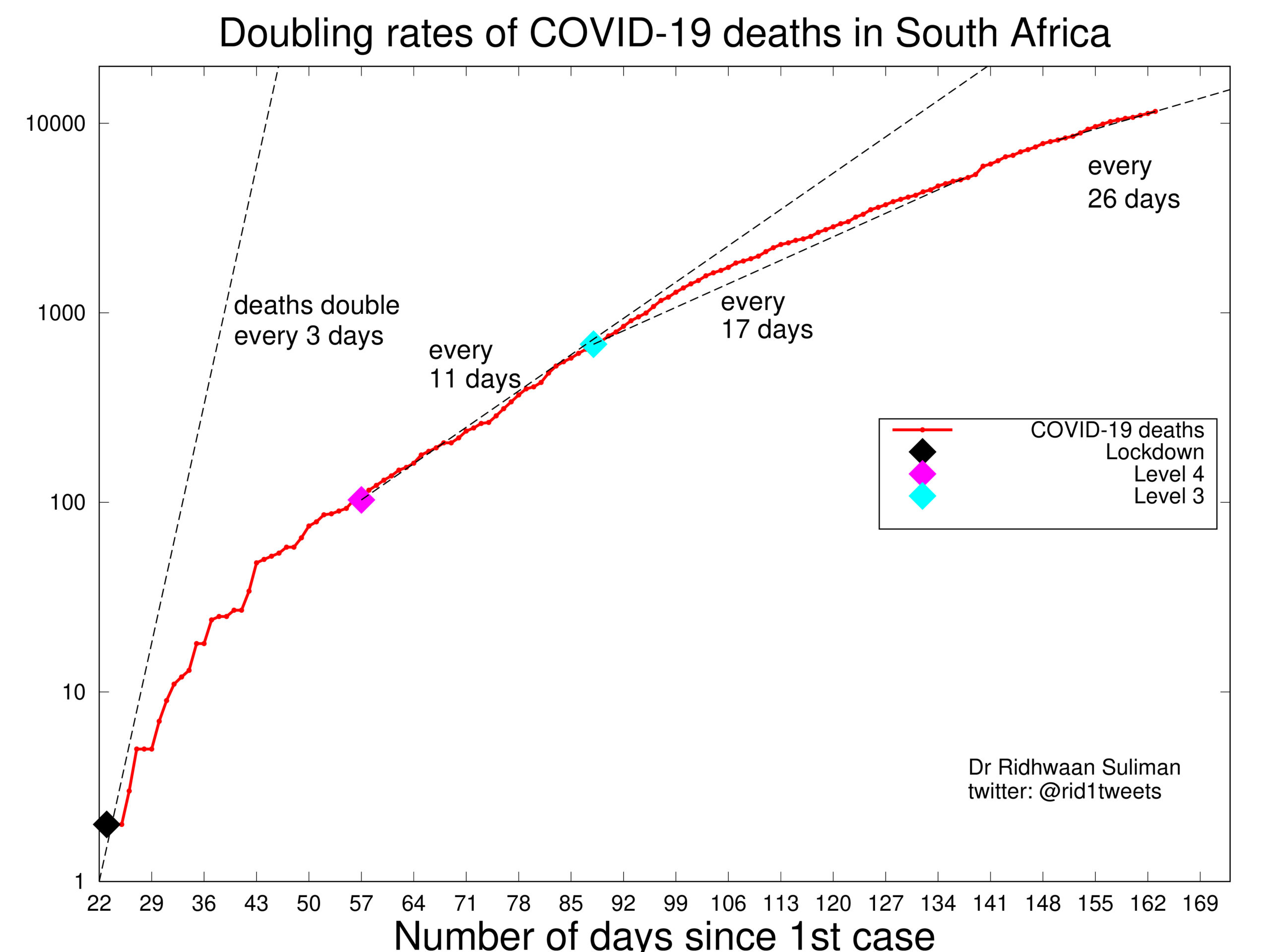 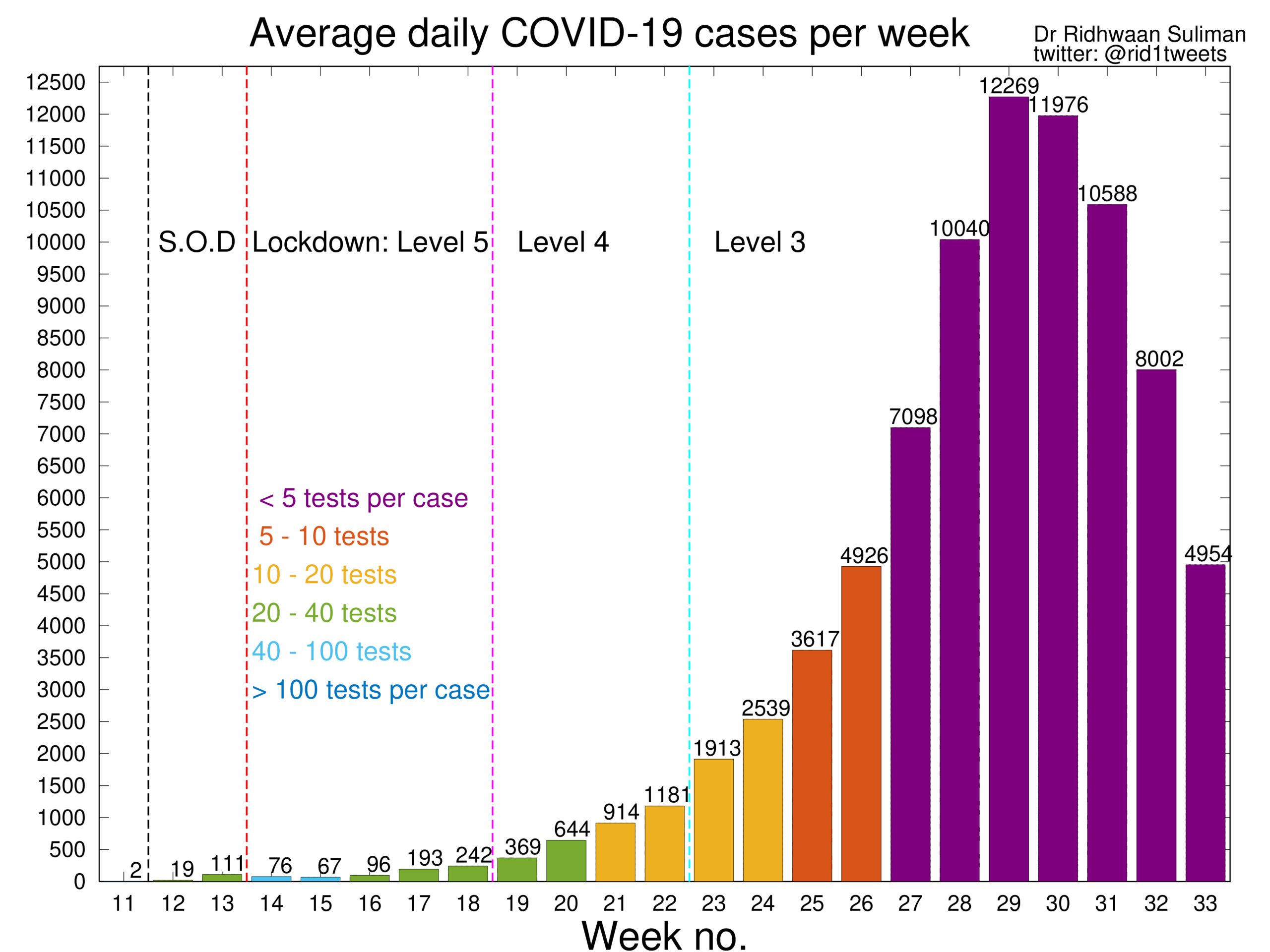 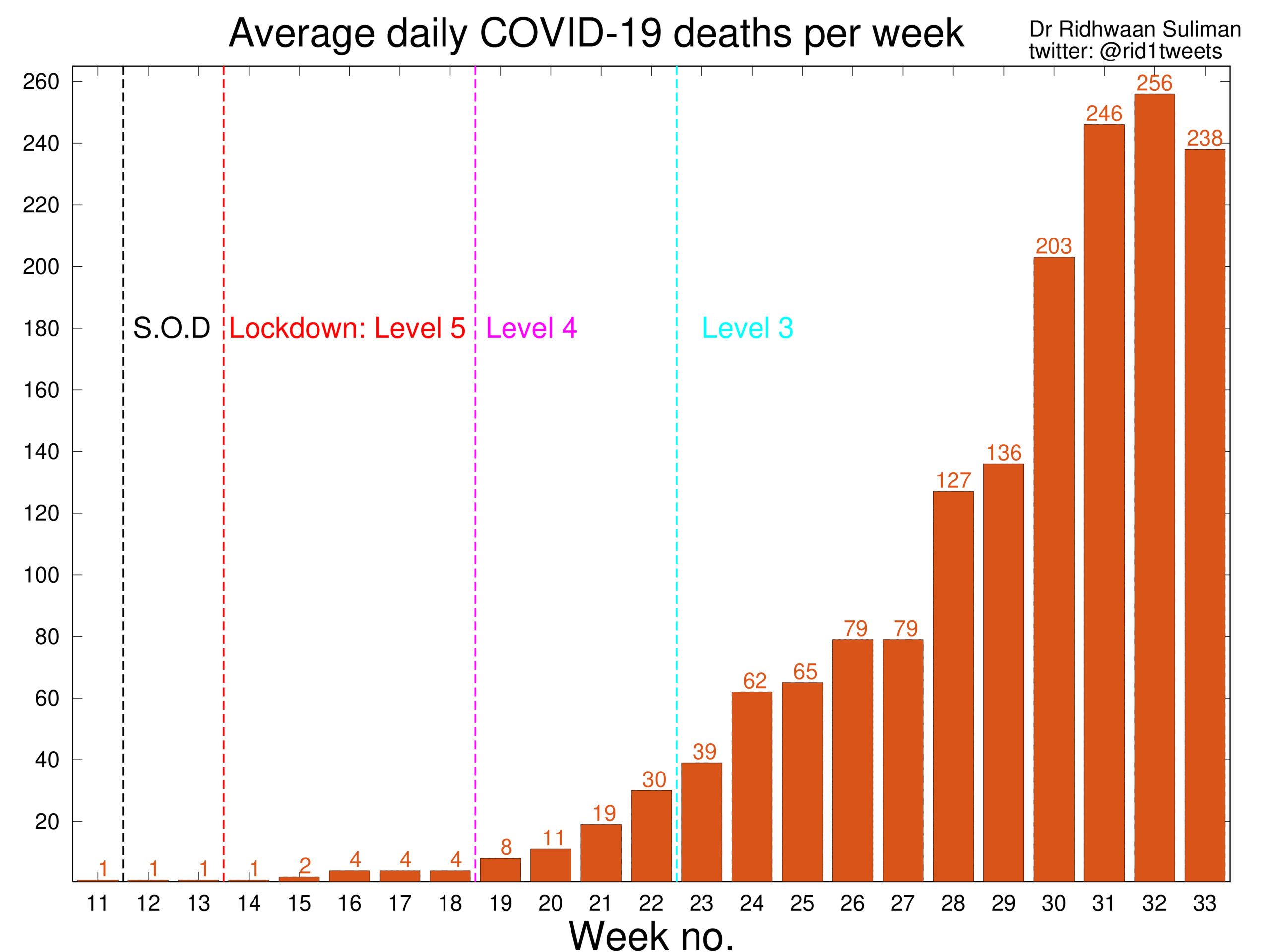 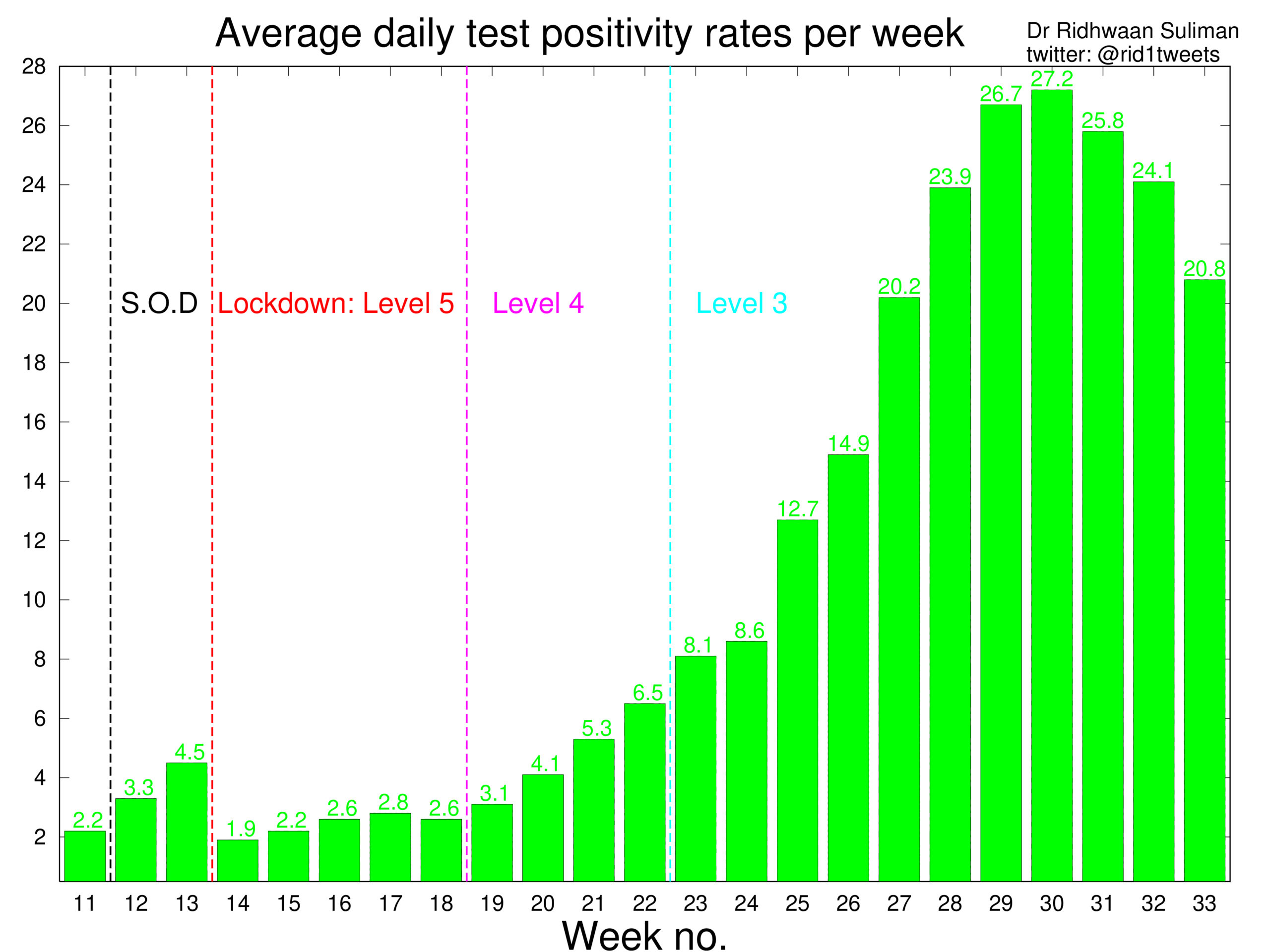 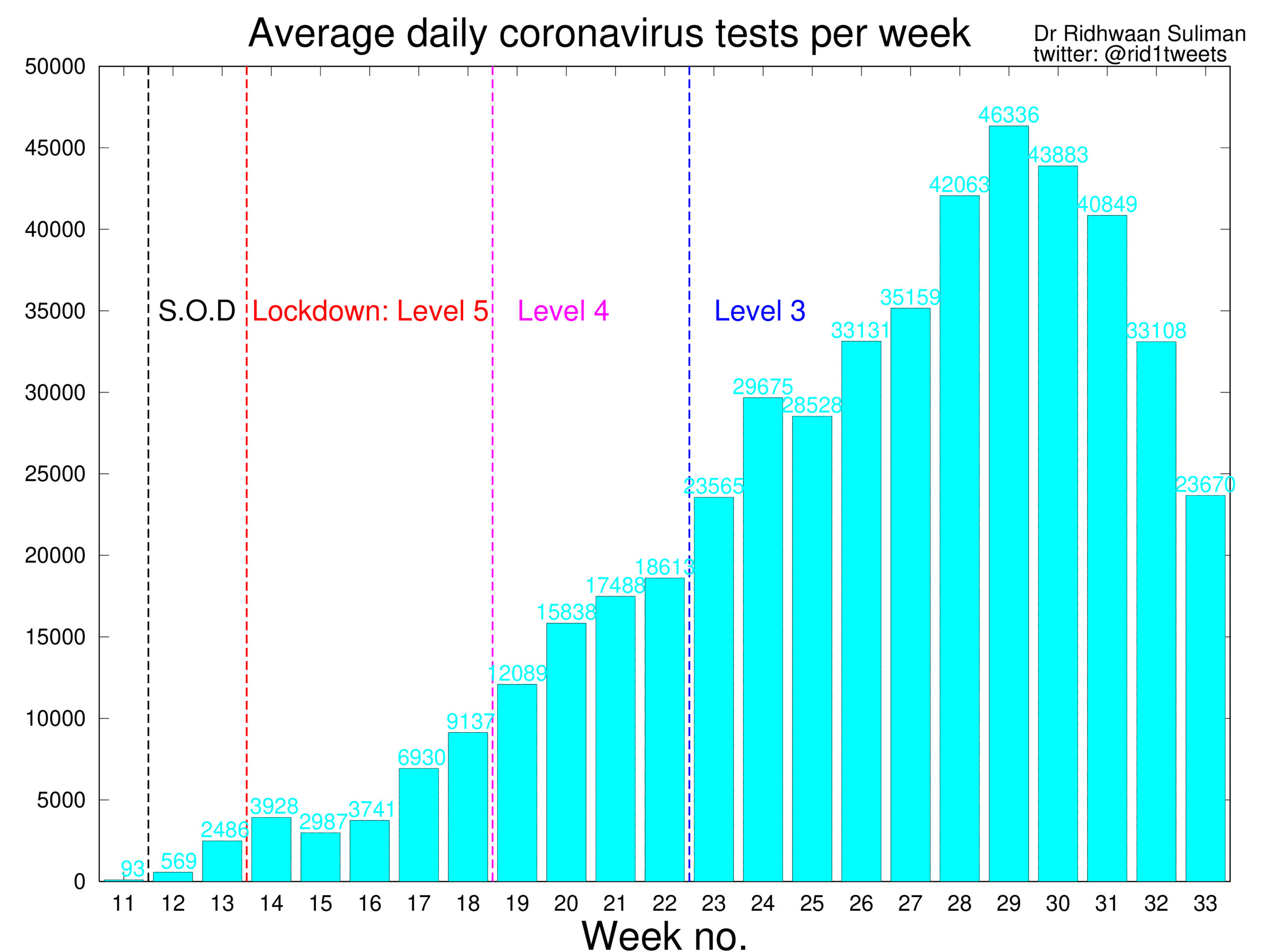 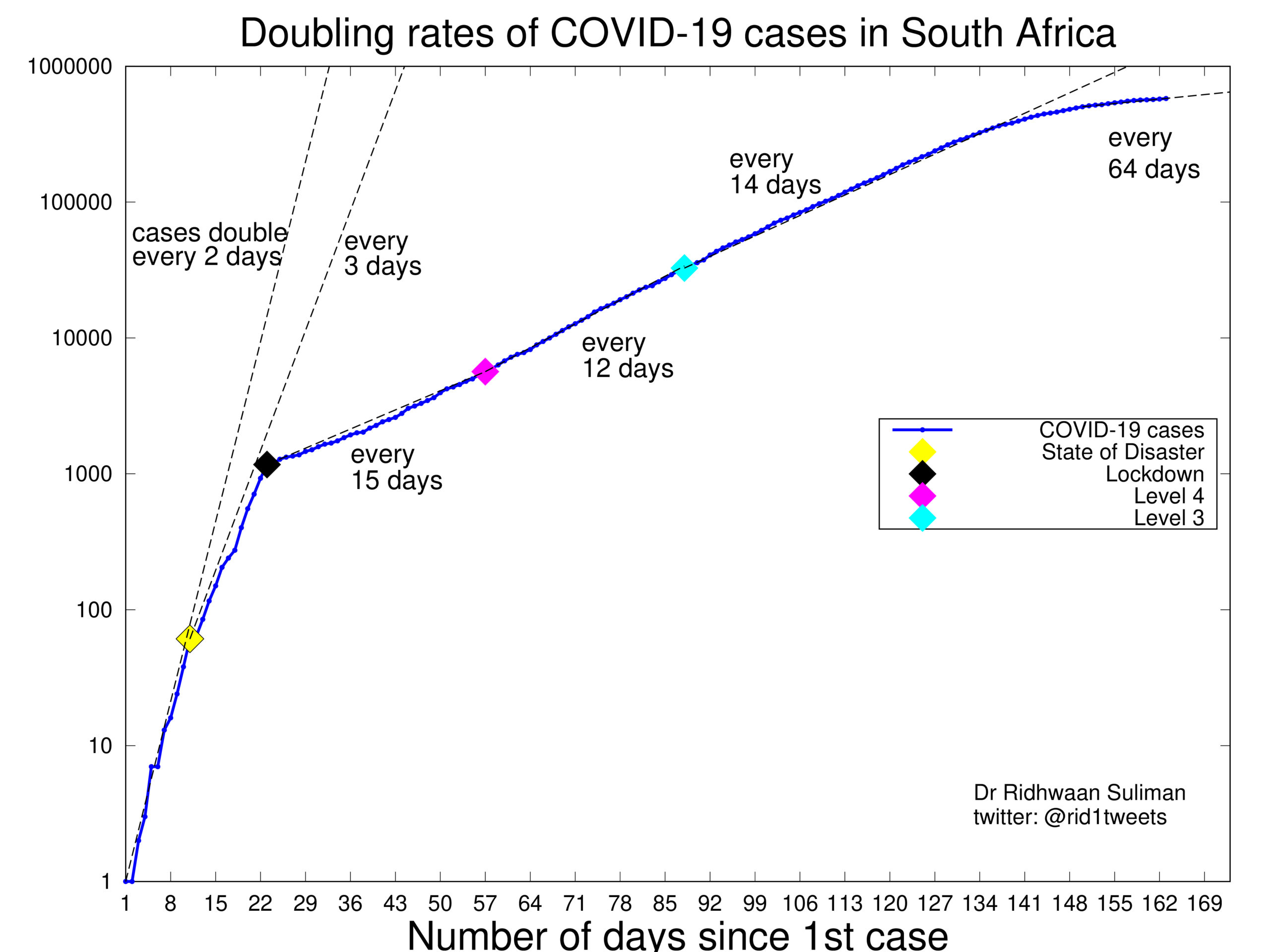 Tests are down from a high of 45,000 a day to just over 20,000 a day but the test positivity rate (new cases as a percentage of new tests conducted) is also declining from 27% some weeks ago to 20% now. (Before we whoop-whoop too fast, the WHO says a safe number for this factor is under 10%.) We have a way to go but the direction of the pandemic suggests the curve is flattening, says Suliman, adding “this is the most important measure to look at – (it) tells you how widely the infection is spreading”.

The graphs also show the doubling rate of Covid-19 is now at 64 days, a significant slowing from June’s surge when it was doubling every 14 days.

“The curve is flattening; there is a significant slowdown,” says Suliman.

The other doubling rate to watch is the death rate – and that is also slowing. Ramaphosa announced that 11,667 peopled had died by 15 August, but the Medical Research Council (MRC) has found high numbers of excess deaths which correlate with the pandemic spread in South Africa.  South Africa has had 586,653 confirmed cases of Covid by Saturday night with 4,513 new cases recorded on the day – this is still high but down on the surge.

“A ray of light is visible on the horizon (after an) immensely difficult five months,” said Ramaphosa in his ninth address about Covid-19. The national mood has soured since his first address when he managed to secure an esprit de corps among South Africans. Since then, economic collapse combined with revelations of the serial corruption of PPE tenders by the ANC cadres has angered South Africans.

Ramaphosa again promised action on Covid-19 procurement profiteering and corruption and said the country would get regular updates, though he did not provide further details.

The recovery rate is high at 80%, Ramaphosa announced, adding that South Africa now has 105,000 active cases – the 10th highest in the world, although we have the fifth-highest number of total confirmed cases.

“The virus appears to have peaked in several provinces,” said Ramaphosa, adding that fewer people were presenting with symptoms at health facilities while the demand for tests had dropped too.

Scientists like Suliman advocate for the easing of testing criteria and for more not less testing even if demand is low:

“Testing, with quick turnaround times and efficient contact tracking and tracing, is one vital tool to combat the virus, and even more important as we ease restrictions on movement,” he says.

While Ramaphosa took his foot off the national brake, he nevertheless warned against virus resurgence. Many countries including the iconic New Zealand (which announced a Covid-19 all-clear first) have reintroduced restrictions after lifting them as second waves of infections have hit. These include the US, the UK, large parts of Europe, Latin America and the rest of Africa.

“Now is the time for greater vigilance and care,” said Ramaphosa, while urging South Africans to mask up and continue to limit movement.

There are still restrictions – no gatherings of more than 50 people are allowed and while social and family visits are now legally permissible, the President counselled caution with the elderly and with those who have co-morbidities. Alcohol retail sales are available from Monday to Thursday from 9 am to 5 pm but hospitality consumption is restricted not by the day but by the curfew.

“Behave as if you are potentially infected with the virus and do not pass it onto others,” said Ramaphosa. DM