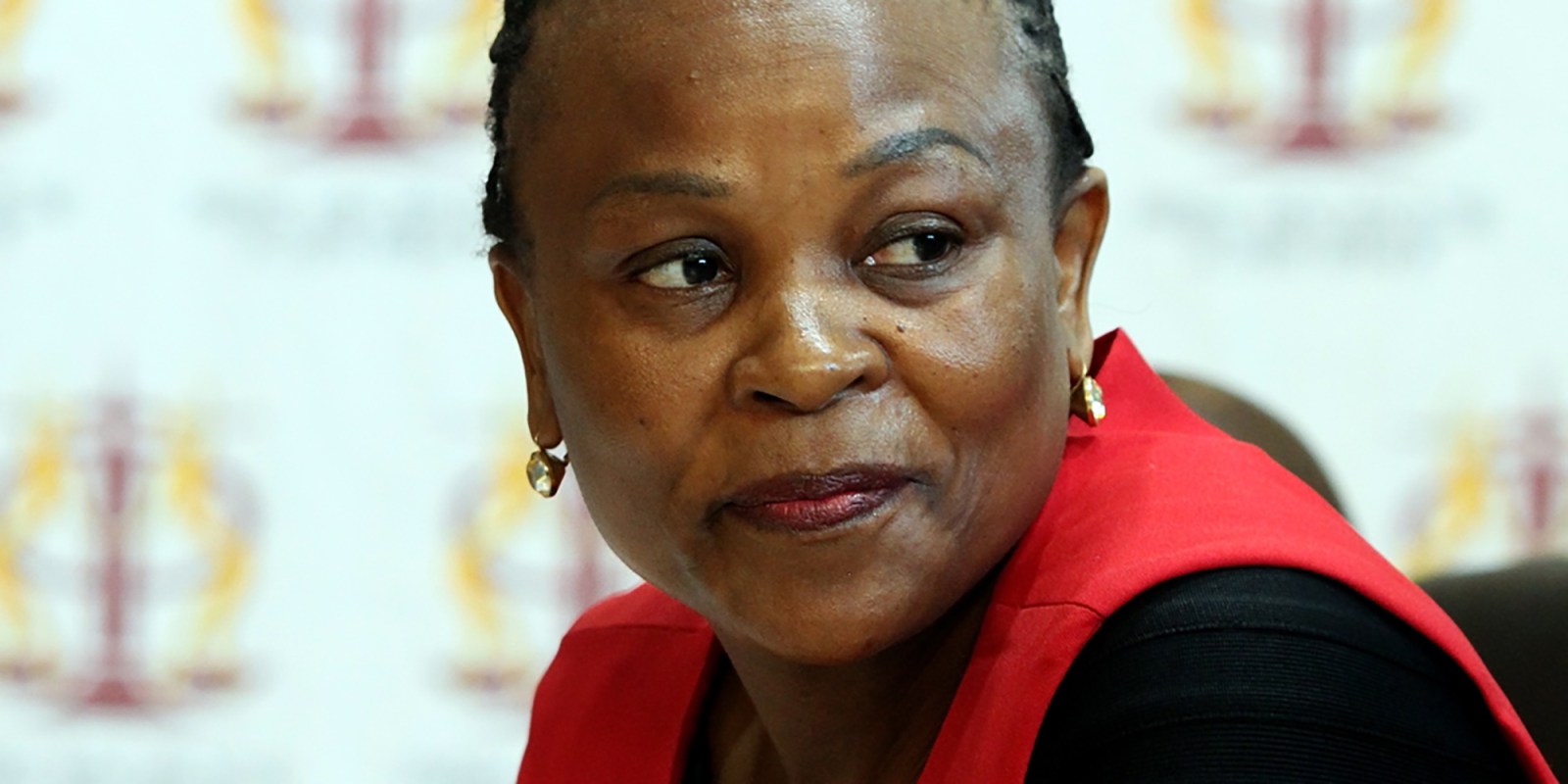 The parliamentary inquiry into Public Protector Busisiwe Mkhwebane’s removal from office must go ahead because the public interest of holding her to account outweighs any possible harm, went Thursday’s legal argument against Mkhwebane’s application to interdict Parliament.

Public Protector Busisiwe Mkhwebane’s advocate Dali Mpofu has argued for an interdict to stop Parliament’s impeachment inquiry until the court decides whether the rules are constitutional and valid.

That hearing on Parliament’s rule, “Removal of Office Bearers in Institutions Supporting Constitutional Democracy”, has now been scheduled for 24 to 26 November 2020, the Western Cape High Court heard on Thursday. The date is still to be confirmed by Judge President John Hlophe.

While Parliament is not opposed to a hearing on its rules, it wants the inquiry to go ahead. Or as National Assembly Speaker Thandi Modise put it in her court papers”

“…(E)ven if adv Mkhwebane will suffer the imminent and irreparable harm on which she relies (in her interdict application), it will be far outweighed by the serious prejudice to the separation of powers and the public interest in the timeous conclusion of the section 194 process that will ensue if the interim interdict she seeks is granted.”

Modise’s advocate Andrew Breitenbach on Thursday argued that one of the functions of Parliament was to hold office bearers to account, and impeachment proceedings are one such instrument.

“This is the ultimate accountability ensuring mechanism. This is about the National Assembly holding someone to account, not necessarily to remove them… They may decide not to,” argued Breitenbach, adding later:

“This is not a trial… It is an assessment by the body that appointed the person… whether they misconducted themselves, whether they are incompetent, incapacitated to perform the job.”

A removal inquiry was not a trial or administrative action.

And while impeachment proceedings were “goal oriented” and by design conducted by politicians, these proceedings had to be substantially fair and meet the test of rationality, by which exercise of public power is assessed.

Breitenbach told the full bench of the Western Cape High Court Mkhwebane did not have the right to stop National Assembly proceedings. The public protector had failed to show how she would be prejudiced, or harmed, given the rules provided for her to be heard – assisted by a lawyer in the public hearing, if the initial panel of independent experts that would have heard from her in writing decided there was a case to be answered.

Parliament’s rule, “Removal of Office Bearers in Institutions Supporting Constitutional Democracy” – its multi-stage process is similar to the removal from office of a president under Section 89 of the Constitution — outlines a 17-step process.

Right now the process is at Step Three, the formation of the independent panel following consultations with all political parties represented at Parliament after the Speaker agreed a case is to be answered.

But that appointment process has been delayed, it emerged shortly before February’s State of the Nation Address, over the unavailability of candidates the political parties proposed. Then came Mkhwebane’s legal action, stalled by the Covid-19 hard lockdown from the end of March when the two-day court was initially set down.

As SONA preparations advance, Public Protector and Parliament in face-off over rules for removal

It has been an almost three-year saga to get to this point. In September 2017, the DA chief whip John Steenhuisen laid the first complaint. No finality was reached and in early 2019 the matter was kicked into touch for the new Parliament to pick up.

In July 2019, Mkhwebane herself pointed out to Modise that Parliament lacked the necessary rules. This was remedied through the rules committee – and the National Assembly’s unanimous adoption of those new rules by December 2019. On the back of this DA Chief Whip Natasha Mazzone submitted a new motion to start the process of inquiring into the public protector’s removal from office.

Regardless of how the Western Cape High Court will rule, Mkhwebane’s impeachment inquiry is steeped in politics.

On public record is the EFF’s unwavering support. Whether ANC MPs have the gumption to pursue the inquiry into Mkhwebane’s removal from office remains to be seen. Much is linked to the governing party’s factional fissures; the public protector has fervent supporters in the ANC parliamentary caucus.

It will all come down to the numbers – removing an auditor-general or public protector requires at least a two-thirds majority in the House, according to Section 194 of the Constitution. That’s 267 votes.

If that threshold is not met, the impeachment falls away and Mkhwebane remains in office – until her seven-year, non-renewable term ends by October 2023.

While on day one of the court proceedings Mpofu made much out of the DA’s “vendetta” against Mkhwebane, and the Speaker’s bias, the rules for the removal from office apply to all Chapter 9 institution office bearers. That includes the auditor-general, South African Human Rights Commission (SAHRC), Electoral Commission of South Africa (IEC), the Commission for Gender Equality, the Commission for the Promotion and Protection of the Rights of Cultural, Religious and Linguistic Communities and the Independent Broadcast Authority of South Africa (Icasa).

Breitenbach raised concerns over how Mkhwebane had approached the matter, describing “an undertone of contempt thinly disguised towards the members of Parliament, who are our representatives”.

It was improper to describe the impeachment proceedings as “nuisance”, particularly given the flimsy proof offered for this.

“The Speaker is just doing her job. It is upsetting that this is somehow mala fides…” said Breitenbach. “She (Modise) has come to the defence of the institution of Parliament.”

Advocate Steven Budlender also dismissed claims of a “vendetta” by the DA, saying the party and its MPs considered the complaint as they exercised “their rights under the Constitution”, and responsibilities.

Mkhwebane’s case was “entirely without merit” as much of the complaint was based on a series of court judgments that were harshly critical of her conduct as far back as mid-August 2017 when the Pretoria High Court set aside Mkhwebane’s remedial action of ordering the parliamentary justice committee chairperson to move on an amendment to the constitutional mandate of the South African Reserve Bank.

On Thursday afternoon, when it came to Mpofu’s turn to respond to opposing counsels’ arguments, the virtual platform which had held up for two days collapsed. For some reason, the judges, who were hosting the virtual hearing, were booted off the platform and could not get back in.

The hearing was adjourned to Tuesday 18 August to sit for an hour. Then it will be up to the full bench of the Western Cape High Court to make a ruling on whether Mkhwebane may interdict the impeachment inquiry by Parliament. DM