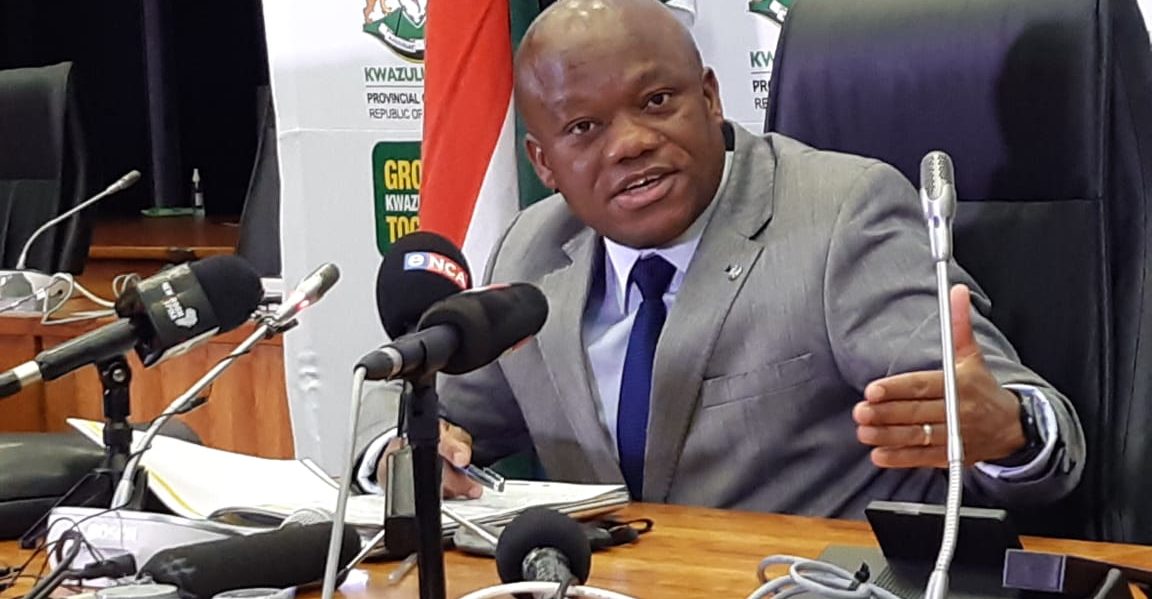 Premier Sihle Zikalala on Thursday released the ‘KZN Covid-19 Procurement Disclosure Report’ in an attempt to get his administration in front of the continuing Covid-19 scandal engulfing ANC-led national and provincial governments, which have been found complicit in a widespread looting spree as ordinary South Africans lose their livelihoods.

KwaZulu-Natal recorded the first Covid-19 case in South Africa on 5 March and since, the provincial government has been scrambling to get ahead of the local outbreak and set itself apart in terms of handling the virus.

Despite the horrendous unemployment and economic data coming out of the country pre and post lockdown, Zikalala told the briefing that Covid-19 had provided the government with “the chance to build a new architecture of the economy and also to introduce new systems in terms of governance and administration”.

The disclosure report, a glossy, 20-page printed document, is evidently part of the “new systems” Zikalala wants to implement in a province that is often viewed as riddled with corruption, incompetence and has a shameful record of holding senior officials, and in particular politicians, to account for malfeasance.

“Of the R1.9-billion departmental spend, R1,139,923,090.00 (representing 57% of departmental spend) was spent on infrastructure programmes. These are projects that relate to upgrades and alterations to health facilities and to the establishment of quarantine facilities,” said Zikalala, reading from the report.

Incidentally, the KZN department of education conducted its own internal investigation into possible malfeasance within its PPE spend and cleared itself. But the Special Investigating Unit (SIU) has confirmed with Daily Maverick that it is investigating the procurement of PPE in the department.

Social development (DSD) — at which a clutch of officials was earlier this month implicated in about R30-million of questionable expenditure, which also led to two criminal cases being laid — spent R54,241,700.92 overall.

The investigations at the DSD were conducted by the provincial treasury and concluded in record time. According to finance MEC Ravi Pillay, such investigations used to take anything between 12 and 18 months. The DSD investigations were wrapped up in about eight weeks.

The SIU is also investigating the procurement of PPEs and blankets within this department, it told Daily Maverick.

He also said the move was a recommendation made by the SIU during a 2019 visit. The SIU did not respond to Daily Maverick’s questions about this recommendation.

While at first glance the disclosure report seems to be extensive, verging on a data dump, many things will be able to be verified only via oversight and good, old-fashioned invoices. For example: The R232,437,919.91 spent on “alterations and additions” to seven wards at Clairwood Hospital.

But Zikalala is evidently aware of this, and with his releasing the report – complete with names of suppliers and unit costs of items – has put himself in a position where, when corruption is found to have taken place, he can say the malfeasance was exposed precisely because he made the information available to the public.

As an example of this, when he was asked if all the companies listed as suppliers in the report were compliant and registered on the relevant databases, he said it “was expected” they would be.

“If we establish that there were one or two suppliers that was established for Covid-19, and were not in the database, we will take action.”

Zikalala, like most politicians, has been talking about “consequence management” since he took up his position.

But the recent response of a hostile public to the unmitigated gorging at the Covid-19 procurement trough seems to have lit the proverbial fire, with Zikalala also announcing that KZN politicians and officials would be undergoing lifestyle audits.

Zikalala said he was “still finalising” who would undertake the lifestyle audits, possibly the “State Security Agency”, he said, who could “co-ordinate with SARS and all of those that do lifestyle audits”.

He said details about the audits would be released following the next executive council meeting “either next week or the following week in terms of time frames and all of that”.

In terms of the spend by municipalities, eThekwini Metro (the centre of the outbreak in the province and the largest municipality by far) spent R447.4-million for its Covid-19 response and management.

What was surprising was that in second place was uMkhanyakude district municipality, in the far northern part of KZN.

It ranks eighth out of the 11 districts in the province in terms of population size, with 689,090 inhabitants.

As of Thursday, uMkhanyakude had the least confirmed Covid-19 cases in the province – at 1,934, with 1,459 recoveries. According to the report, it spent R154.4-million, almost all of which is listed under the heading “Community and Social Services”.

Earlier on Thursday, the auditor-general noted that uMkhanyakude’s audit findings had remained stagnant, with a qualified audit, and that its financial health was “of concern”.

The AG also noted that despite the poor audit outcomes, uMkhanyakude had spent R7.4-million on consultants and was also second to eThekwini in terms of annual irregular expenditure in 2018/19, spending R495-million, compared to the metro’s R2.34-billion. DM

"Never give up! Even Moses was a basket case." ~ Church sign in Cape Town