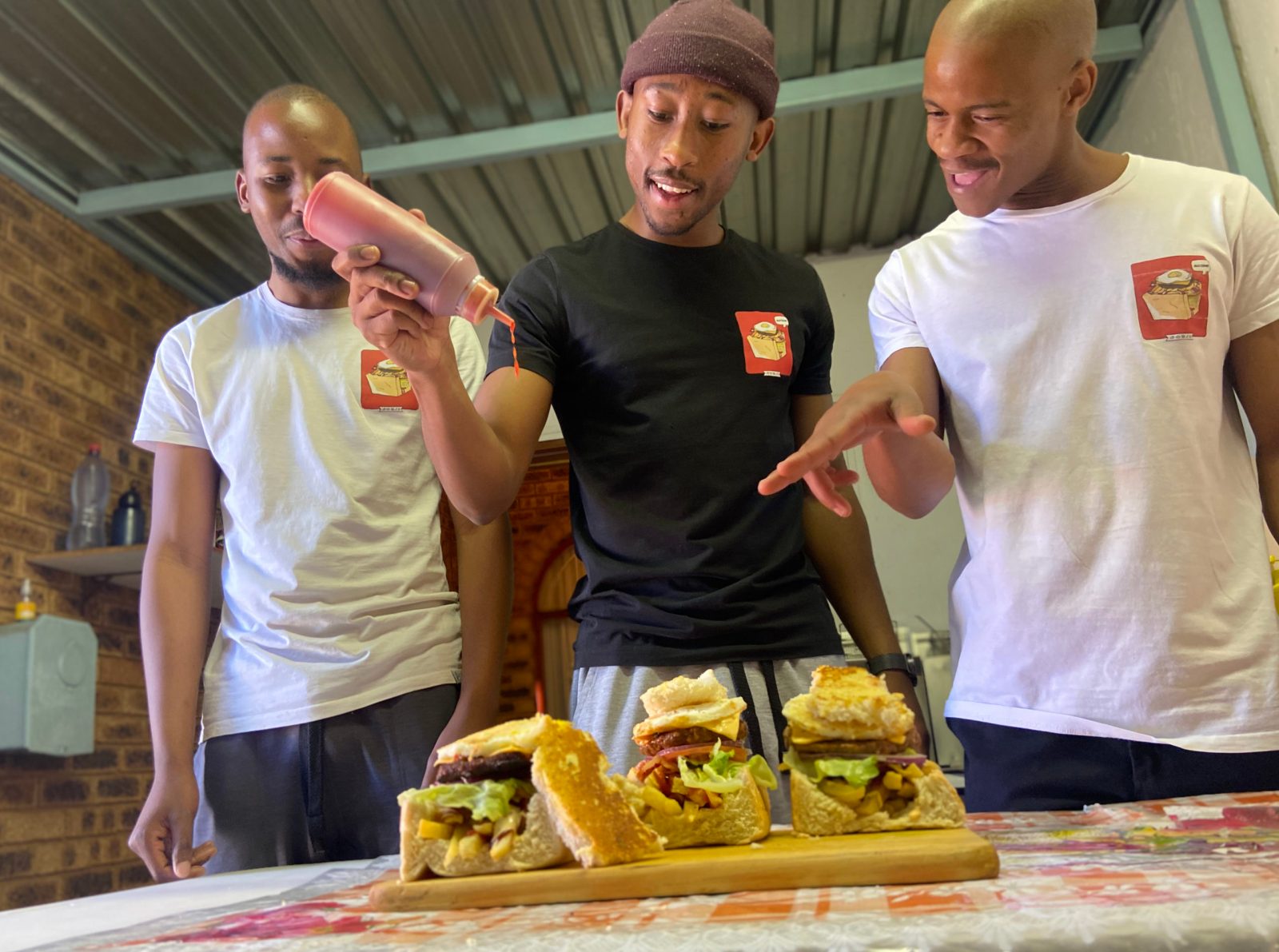 The traditional kota, cousin to the bunny chow, brother to the S’phatlo, takes an eco trip uptown.

“Have you watched Narcos on Netflix? It’s about Pablo Escobar, the Columbian cocaine billionaire?”

“His drug business had a really good business model, an amazing pyramid. The business is divided into three: The producer, the midi-delivery vehicle and mini-vehicle. There’s always someone to finish off with the last delivery – they’re the runners.”

Strategic corporate communications whizz turned entrepreneur and CEO/founder of Scooter Treats, Fezile Dhlamini, 28, has just delivered my first ever kota on his cool, green-clean electric tricycle scooter and is attempting to impart a lesson on his Pablo-like strategy. Taking notes? Not me. I’m too sidetracked by the aromas of the carbohydrate contraband he’s just delivered.

I cut both kotas in half so we can mix it up.

“I don’t think I can eat two halves. You may have to have more. I’ll cut it in half again. What? Is that processed cheese. Whoa. Chakalaka and egg and bacon. And chips? In bread?”

“Am I doing this right? Holding with two hands?”

“Mmm. It’s yummy. Maybe I’ll end up eating up that other piece too…”

“I think you are. I think you’re going to end up eating it all.”

Made by 2-Selai & a Butter in Protea North, Soweto, Dhlamini says besides the corporates who order I’m only his second white customer – beaten to the number one slot by an Italian who lives in Broadacres. “He’s a loyal non-black buyer of our food, he goes crazy over it. But mostly, our target market are the guys we grew up with, the 23 to 30-somethings with disposable income who like a good time and have a feeling for another way of life, a life they remember and resonate with, but aren’t always able to access.”

“It really stands for tomato, lettuce and cucumber.”

“There’s something about eating a kota that takes me home to Dube even though I live in the ’burbs now. Soweto is where I feel like I don’t have to try and pretend. People know me there. Growing up in Soweto makes you adaptive in working out how to handle things. You become a chameleon.”

Dhlamini’s business interests are also chameleon-ish. Besides Scooter Treats, he also has his own social media digital agency, and has founded Green Scooter, the distributor and manufacturer of the electric scooter brand, the Zbee, in association with Clean Motion, his new Swedish partners. He found them online. “I used my last money to get to Sweden to show them my plans.”

Now, he says the humble kota is ready for its debut on the world culinary stage. “Like pizza or a burger, it’s time we go global.”

When he says “we”, he means him and the owners of 2-Selai: Thabane Ledwaba, Sibisuso Twala, and Teboho Selai. “We met at UJ a few years ago.”

“2-Selai makes the food out of a kitchen in a home garage and I deliver it. I’ll be joining them as director one day, but for now we have an association. We have two vehicles in Soweto, one in the north of Joburg and we’ve partnered up with another guy on the West Rand to test that market.”

“2-Selai meet me in Olivedale and we pack the deliveries – say five to 10 meals – into electric vehicles and we disperse. From an operational and maintenance  perspective, using an electric vehicle works. People say electrical vehicles are rich men’s toys but they’re economical and we’re contributing to a cleaner society by helping to bring down greenhouse gas emissions.”

“No, a bunny chow is a bread holding a stew.’

Food anthropologist Anna Trapido says the word “kota” is short for a “quarter of a loaf of bread”, which forms the base of the food. “It’s called a S’phatlo in Pretoria. It’s deeply connected to our history as a country when black people were not allowed in restaurants or were forbidden from using plates or cutlery. This became a way of carrying food. It’s an edible container.”

“My personal favourite is the Biff, which is a flattened kota. It’s wrapped in newspaper and pushed under the wheels of a passing taxi. Once it’s flattened and the fillings fuse, it’s easier to pull off pieces to share,” she says.

Sharing is part of the etiquette of eating a kota, says Trapido. Other protocols include: “The person who paid for it has to get the back side of it, unless he or she says you can have it. The top white bread part doesn’t belong to any one person and, very important: you never eat it with a knife and fork.”

Part-owner Thabane Ledwaba explains how the loaf is cut into four quarters. “One quarter is hollowed out and the soft inside is set aside for later. Now we begin to build it: First freshly made chips on a base of classic South African chakalaka. Achaar over it is optional. Next is the crispy back bacon, layered with fresh lettuce, tomato, red onions, cucumber and maybe coleslaw. Then we place the main thing like beef, pork, chicken or fish – we even go vegetarian these days because of millennials’ eating habits  – and top with cheese, egg and sauce. Bring back the soft centre bread, we finish off the kota with a French toast top.”

At 26, Ledwaba left his Sandton desk job in corporate financing for 2 Selai & a Butter with Selai and Twala. “We’re in Soweto’s Protea North, so we’re in the south-west of the south west. For awhile, I used my salary as funding and then took a leap and joined full time. We wanted to create some jobs because there’re too many unemployed young people just hanging around street corners. The unemployment rate is crazy.”

“We justified charging more than usual by using quality products and dressing it up for people who want a certain standard. Many of us have grown up eating it – it’s in our blood and in our culture.

“So maybe today you live in the burbs but you remember it. But now the kota has been redefined and so have you. It speaks to who you are now. The journey of this kota and you is reciprocal. Maybe you grew up in the townships. Maybe the kota cost R10. Now you both have a different status. You may live in Sandton but you’re staying true to your roots even if sometimes you feel like a glass of champagne instead of a beer.”

To that end, Ledwaba is thinking of tapping into a more “culinary world”. “Maybe chorizo and prawns with avo. We’re even thinking about sweet potato chips. Maybe lighter bread, something more bourgie.”

Still, he wants to keep things close to the kota’s original roots. “You’re the same as you ever were, the difference is there is a bit more in your bank account.”

“It’s a personal choice. The thing is about this kota is when you have one, you’ll wish you bought a second one. The explosion of flavours is addictive.”

“Pablo had a huge network. Everyone had their own turf. There’s a place in Tembisa where they make it so thick, you have to put a kebab stick in. But you can’t just fill a prego roll and call it a kota. No.”

“I’m shovelling it down. Is this piece still mine? Are both those pieces still mine?”

“I told you you’re gonna finish this thing.” DM/TGIFood