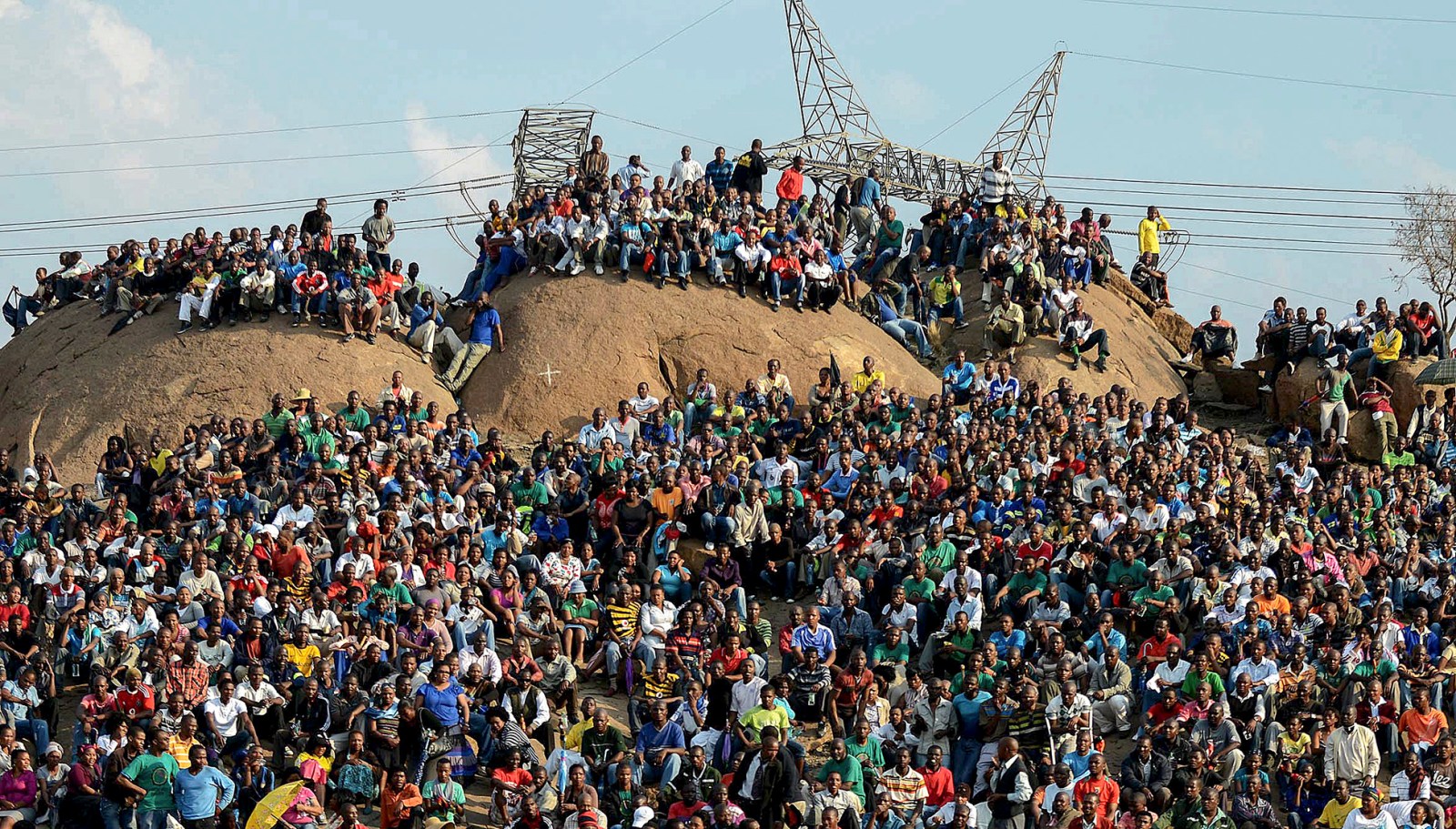 A file picture dated 23 August 2012 of family members and members of Wonderkop informal settlement gathering on a hillside overlooking the scene of the massacre following a memorial service held in honour of Lonmin mineworkers who were killed by police in Marikana near Rustenburg. South African President Zuma and the Presidency announced on 25 June 2015 to release a report the same date that inquired on the death of 34 miners in August 2012 during during a platinum mine strike in Rustenburg. (Photo: EPA/STR)

On 16 August 2012, 34 miners were shot and killed by the South African police in what became known as the Marikana Massacre. The killing were a culmination of a three-week strike and stand off between unions and mining bosses.

On Thursday 13 August, the Socio Economic Rights Institute (SERI) commemorated the Marikana massacre by hosting a webinar discussion. Marikana has emerged as a definitive moment that highlights the endemic violence of the police while addressing protest and attempting to disperse gatherings.

Nowili Nungu,the daughter of Jackson Lehopa who was one of the miners who died eight years ago, shared her experience of losing her father. She said that life had been very painful and difficult as he was the family’s breadwinner. After her father’s death, she was left with so many questions such as “how are we going to live without a father, six siblings without a father?”

“I even considered leaving school and finding a job to help my mother,” says Nungu.

She was currently doing a diploma in public relations and thanked those that helped her along the way, naming AMCU president Joseph Mathunjwa and SERI among these people.

Nungu says that she feels as though there still is no justice eight years later. Whenever she sees someone wearing a police uniform it reminds her that they are the reason she no longer has a father.

“No one has been held accountable” she says. “Having a single parent, it’s not nice.”

Sebolai Liau’s father was also killed at Marikana.‘“My father passed on when I was 14 years old and I was doing Grade 8,” says Liau. “I was forced to play a father’s role to my four-year-old sibling.” He feels that he was  “socially and emotionally abused both by the police and the prevailing circumstances”.

Liau said he would have expected to hear that some of the policemen had been arrested, yet they are still living their lives. He closed off his input saying: “May the souls of the departed rest in peace.”

Sbu Zikode from the civil society organisation Abahlali base Mjondolo pointed out that there had been some journalists, NGOs and academics who had supported repression of Abahlali. He pointed out that state violence has continued with government-sanctioned illegal evictions during the state of disaster – evidenced by many people being beaten, tortured and shot. He said that attempts to open and pursue cases have been unsuccessful and that the brutalisation of people continued. Zikode said these incidents show that the police and state are working against, and not for, the people.

“We do what we do because of the deep love we have for our country,” implored Zikode as he explained the organisation’s fight to ensure that shack dwellers’ rights are not violated. The state was creating an angry society, Zikode said. He said that he sees this moment as an opportunity to build unity and solidarity in the midst of the brutality faced by people.

“We are here to call [for] justice for Marikana.”

Axolile Notywala, from the Social Justice Coalition, said that the Marikana massacre highlighted a culture of impunity encouraged by those in leadership positions.“We have a failed and failing leadership who continue to fail at governing and fulfilling the promises of the Constitution,” said Notywala.

This results in the state governing through law enforcement agencies like the police and army. “We are becoming a police state,” said Notywala. He said that the illegal evictions that had been taking place particularly in Cape Town, speak to the state’s  failure to provide dignified basic services. Failure to redistribute land has meant that people expropriate land for themselves.

Notywala said that people have a constitutional right to protest if services are not delivered. However, when they do “they are met with the barrel of the gun”. He argued that, in as much as those in law enforcement on the ground need to be held accountable, they are acting on the instructions of officials in high positions and that those high-ranking officials need to also be held accountable for sanctioning killings.

He also spoke of the importance and impact of language used by the state to criminalise people. He said using language like “land invasions” instead of “land occupation” and “illegal protesting” when there is no such thing as an illegal protest, is used to trigger the police to action.

He said that what we see currently playing out should not be allowed to happen and the onus is on us as South Africans, to ensure that those perpetrating injustices go to jail.

Adele Kirsten, who was part of the Marikana panel of experts on policing and crowd management, said that South Africa was witnessing a continued use of unlawful force by the police and that “it is deeply rooted in how the SAPS understands its role as a police service in our country”. There has been a missed opportunity to use the report’s findings and recommendations as a way to transform into a different kind of policing.

The report dealt extensively with the use of weapons and established that weapons of automatic fire are prohibited when dealing with crowd management. The report also established that any use of force had to be in line with international human rights law and principles.

The report found that what precipitated Marikana was inappropriate political interference as well as failure and non-accountability of top police management. The panel handed over the report to the minister of police in 2018.DM/MC