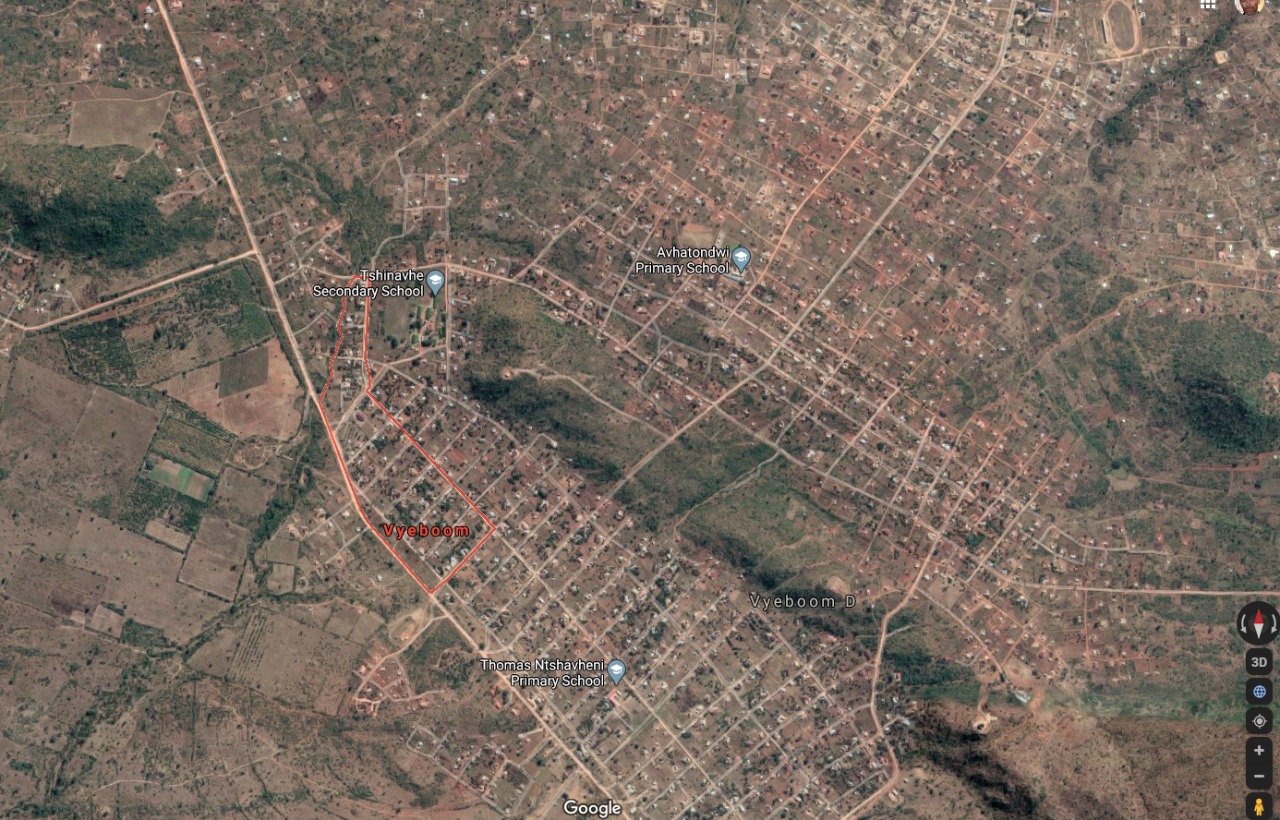 There is no trace of the R10-million sports project the National Lotteries Commission says it has funded in Vyeboom, Limpopo. (Photo: Google Earth)

Vyeboom Civic Association says the community has not seen any of the money apparently donated to it by the National Lotteries Commission.

A tiny community in northern Limpopo, which was supposed to benefit from more than R15-million in National Lotteries Commission (NLC) funding, say they have no knowledge of the projects or where the money might have gone.

During July 2020, GroundUp carried the story of two grants awarded to Vyeboom Youth Development (VYD). According to NLC records, VYD received R5-million in 2017 to stage a music festival. In August 2019, VYD received R10.1-million in lottery funding, apparently for a sports-related project. Very little about the music festival is known, except that it apparently took place in Mpumalanga. No trace of any sports project in Vyeboom, which is in rural Limpopo, could be found.

Thakhani Theobald Mudau, a founding member of VYD, who is registered as chairperson of the organisation with the Department of Social Development, told GroundUp then that VYD was dormant. And at a meeting on 9 August 2020 convened by the Vyeboom Civic Association, which was instrumental in the creation of the VYD in 2011, Civic Association spokesperson Arnold Mulaudzi said the association had only learned about the funding in the media.

The Vyeboom Civic Association acts as an umbrella organisation in the area and is very involved with development projects.

Mulaudzi said VYD was intended to help combat crime in the area and fight against the abuse of women and children. The organisation also tried to provide alternative activities to keep young people off the streets. It had become dormant, especially after some of the office bearers moved to cities, where they found employment.

Mulaudzi said that on learning about the large sums of money that were apparently channelled via the VYD, the association had started to investigate. At the meeting on 9 August, attended by traditional leaders, community leaders and members of the civic structures, community members said that they had no knowledge of the NLC funding.

Mulaudzi said the civic association had contacted the National Lotteries Commission spokesperson Ndivhuho Mafela, asking whom the NLC had funded and why this was done under the auspices of Vyeboom Youth Development. Mafela did not provide them with any information, but promised to get back to them within a week. But the association is still waiting.

During the past three years, investigative reporters uncovered what appears to be hundreds of millions of rands in dodgy Lotto grants.

The Limpopo Mirror and GroundUp first exposed this in February 2018, when we followed the trail of a R27.5-million grant to a Vhembe-registered non-profit organisation, Denzhe Primary Care. What we found has turned into one of the biggest scandals that the NLC has had to deal with. Of the R27.5-million Denzhe received – to build a drug rehabilitation centre near Pretoria – more than R20-million cannot be accounted for.

The NLC responded by launching its own investigations into the alleged irregularities, which apparently cleared the organisation of any wrongdoing.

In February 2020, the NLC Board appointed an audit firm, Sekela Xabiso, to institute an independent investigation into allegations of improper use of funds intended for good causes. The outcome of this investigation has not yet been made public.

The Department of Trade and Industry, however, has instituted separate investigations into projects such as the Denzhe Primary Care grant. These investigations are expected to be completed in the next month. DM

Published in partnership with the Limpopo Mirror.