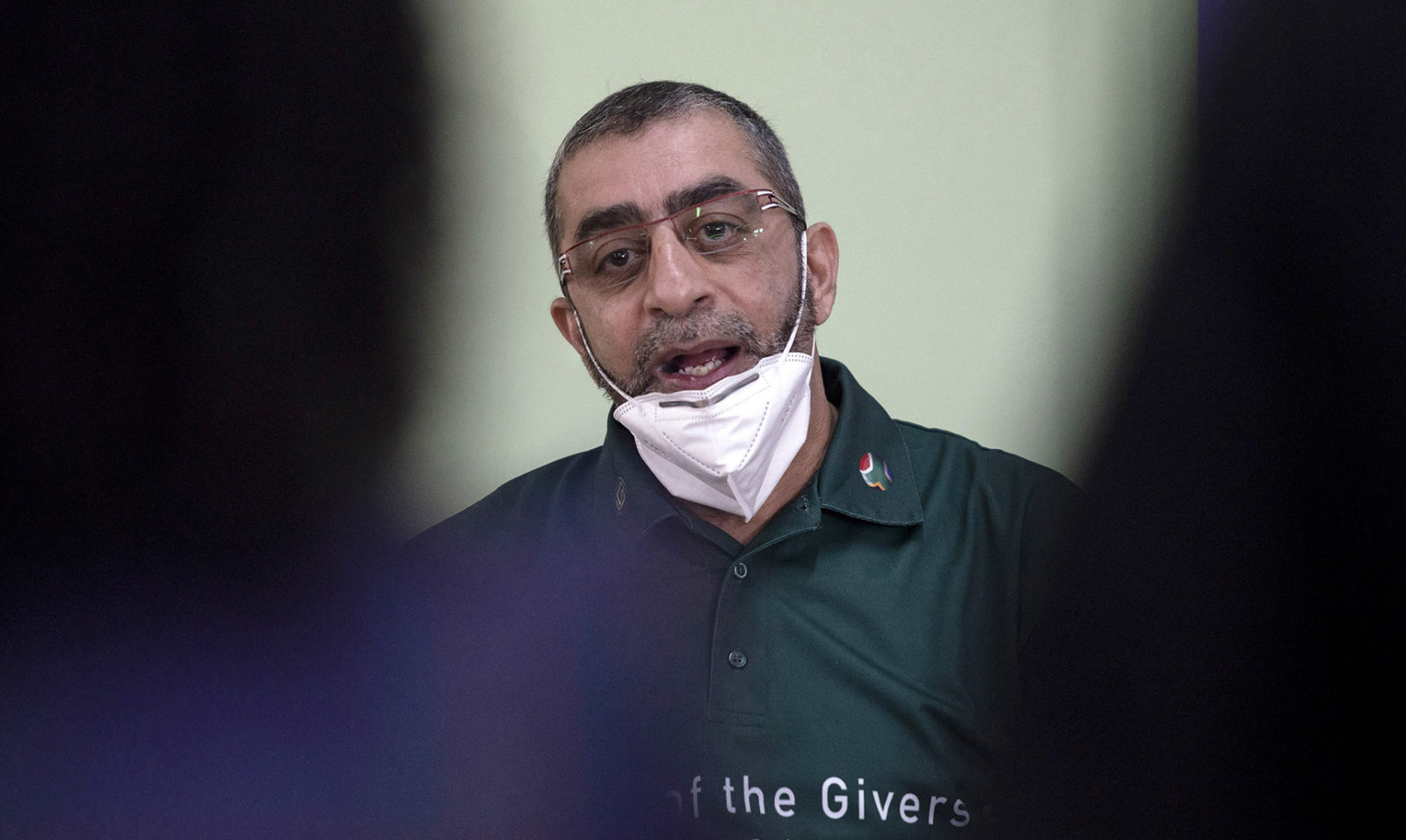 Dr Imtiaz Sooliman during a media briefing at the Gift of the Givers Covid Oxygen ward, newly opened at the Lentegeur Hospital in Mitchells Plain, Cape Town. (Photo: David Harrison)

Funding and launching a R10-million Covid-19 hospital wing, overseeing nasal swabs of the Springbok team, and monitoring accounts are all in a day’s work for Dr Imtiaz Sooliman, the human dynamo behind Africa’s largest humanitarian aid organisation.

“Green is a pleasant colour,” Sooliman says, gesturing at the walls. “It’s the colour of nature. Looking at plants is appeasing.”

Sooliman is visiting Cape Town to launch the R10-million Covid-19 wing funded by his relief organisation – Gift of the Givers – in Mitchells Plain. The newly renovated facility with 60 beds and state-of-the-art oxygen machines will open in September. Gift of the Givers has also started building a similar oxygen-equipped facility at a hospital in Bhisho.

Speaking to Maverick Citizen, the founder of Africa’s largest humanitarian aid organisation’s words are quick-fire rapid. He carries about him an air of great alertness, and bemusement, as he provides snapshots of his globe-spanning life.

Since 1992, Sooliman’s Gift of the Givers has saved hundreds of thousands of people from disasters, droughts, floods and famine, around the world.

Right now, Gift of the Givers has 550 staff. “This includes 140 in South Africa, 236 in Syria, 25 in Somalia, 25 in Malawi and five in Zimbabwe,” says Sooliman. “Now with lockdown, I’ve never been home for so long… 130 days. But even from home, I manage the projects, I implement the systems. I know everything that goes on. I know how much money comes into the account. I know who double paid, I know who didn’t pay. I know who sent what money. I get feedback all the time. See, I have the right people in place.”

During the interview, Sooliman’s staff knock on the door, gesturing at their wristwatches. The organisation is due to perform Covid-19 nasal swabs on the Springbok Sevens rugby team in Stellenbosch.

“Yes, we’re testing sports players before the games start again,” says Sooliman. “We’ve done the Stormers, we did Kaizer Chiefs, we did the Lions, we did the Sharks. We send our teams to them to do nasal swabs at R650 each, the best price in South Africa. Obviously we have no mark-up.”

Sooliman recounts some personal career highlights. This includes shipping a mobile container hospital into war-torn Bosnia in 1993, and building the Ar Rahma Hospital in northern Syria in 2013. Today, Ar Rahma Hospital treats 12,000 patients a month and bears the name, “Gift of the Givers Foundation” in shiny letters on its facade.

Most of Sooliman’s responses are well rehearsed, with some spontaneous lapses.

He has delivered food and water in Pakistan, Zimbabwe, Malawi and Somalia. His teams helped victims of the 2004 tsunami in Thailand and performed life-saving surgery following the 2010 Haiti earthquake which killed 220,000 people.

Despite requests from his colleagues that he wrap up the interview, Sooliman invites more questions. So, how does he cope with witnessing all that suffering and death?

“I’ve coined a new word,” he says. “It is emotional distancing. I brief my staff and I tell them, don’t ever attach yourself to a person. You can say, you know: ‘I feel sorry for the people of Syria, for the children of Syria.’ But don’t feel sorry for individuals. Don’t feel sorry for Ishmael, Ellen, Johnny or Dumisani. The moment you do that, you’re dead. So my wife Zorha, she says to me I’m an alien. I am not from this world… I’m too cold.”

Sooliman is smiling. The philanthropist with the cold heart? “The point is to have compassion generally,” he says. “But not on an individual level.”

Sooliman, 58, was born in Potchefstroom and moved to Durban after his parents got divorced. “At the time, for us Indians there weren’t many options to study. For us, medical school was in Durban. So I went there.”

In 1985 he qualified as a medical doctor at the former University of Natal medical school, rubbing shoulders with peers like Minister of Health Dr Zweli Mkhize and his deputy, Dr Joe Phaahla.

He continues: “I moved to Pietermaritzburg in 1986 and opened a private practice. A patient told me about this spiritual teacher based in Turkey, saying I should go. I made a joke with him. I said ‘it’s 1986, I still haven’t been to Cape Town, how will I get to Turkey?’”

But Sooliman recalls finally meeting the Sufi teacher in Istanbul on 6 August 1992 – 28 years, to the day, before doing this interview with Maverick Citizen.

“The moment we made eye contact, I fell in love with a man I didn’t even know,” he says. “It was like our souls spoke. He said to me in Turkish, and I don’t speak a word of Turkish: ‘My son, I’m not asking you, I’m instructing you, to form an organisation. The name will be Waqful Waqifin, and that name is translated into ‘Gift of the Givers’.

“You will serve all people of all races, of all religions, of all colours, of all classes, of all political affiliations and of any geographical location. You will serve them unconditionally, not expecting anything in return. Not even a thank you. Remember, the dignity of man is foremost. When someone is down in the ground, don’t push them further down; hold them, lift them, wipe the tears off a grieving child, console the widows.’”

Back in South Africa, the trained medical doctor, along with his wife Zorha, started running the humanitarian organisation from their Pietermaritzburg home’s spare room.

“And then people started coming to us,” he says. “They would say, we need bursaries for our kids. We haven’t got food, we need food parcels. We need counselling, we need water. And as that happened over a period of time, we established 21 different categories of projects. For example, my wife runs the counselling service. Now in recent years, we got involved in kidnappings. We help negotiate in hostage situations.”

After the Knysna fires of 2017, Gift of the Givers even turned to rehabilitating bees. “With the Knysna fires, people said 22 million bees had died. So we got involved in that. At the time, people came for food and collected blankets and that kind of stuff.

“Then they said, but first you need to understand about bees. So I put on the special clothes and went inside. And this is one of the greatest things I’ve ever done. You see it on Discovery Channel and on Netflix. But seeing it live, all those thousands of bees and how they make that honeycomb and how they move. Wow, what an experience, man! And I said: ‘Thank God for this!’ I fell in love with the bees. I love this project, it’s called Honeychild.”

Where does he get funding? “The spiritual teacher told me: ‘You will never look for money and people from all over the world will come to you.’ And for 28 years, we’ve never formally asked for funding.”

He adds: “Look, initially, because we started many years ago, in the time of apartheid, people regarded this as a Muslim organisation, you know, there were associations of terrorism and Al-Qaeda. So initially the support came predominantly from Muslims. And then people started seeing us working; the media started to travel with us, telling our story. People saw us going to Christian countries, to whatever countries, helping an Afrikaner guy, a Hindu guy, an English guy. People started understanding that this is nothing to do with religion.

“But the real turnaround came in 2017 with the Knysna fires. People saw what we did, and corporates started tracking us. I even appointed a corporate relations manager, because I don’t have time to talk to the people.”

In Pietermaritzburg, Sooliman has five adult children with Zorha. His second wife, Ayesha, a qualified nurse, lives a few blocks away. They have a four-year-old daughter named Rahma (which means mercy), a name shared with Sooliman’s Syrian hospital.

“She changes the channel to 403, eNCA, that’s where she gets her news. The other morning, she gets up and says to me: ‘Daddy, I’m watching TV, but I don’t see you on the news. Why you not on TV?’ So I said to her: ‘Don’t worry, I will arrange to be on there soon.’”

While it has provided life-saving aid for nearly three decades, Sooliman’s foundation has also changed stereotypes about Africa.

In a 2011 interview with US broadcaster CNN, Sooliman points out that through Gift of the Givers, Africa is providing aid instead of receiving it.

He says: “When I was in Pakistan in 2005, they got confused and they said to me: ‘Who are you people?’ I said: ‘We’re from South Africa.’ They said: ‘Oh, you’re from Africa, did you come to ask something of us here?’ And I said: ‘No, I didn’t come to ask something, I brought something.’ So there we were, saving people in another land.

“This time, we were not asking… we were giving.”

There’s another knock on the door. Sooliman gathers his four phones. Saving the world is a never-ending job. DM/MC