Angry Covid-19 community health workers say they are no... 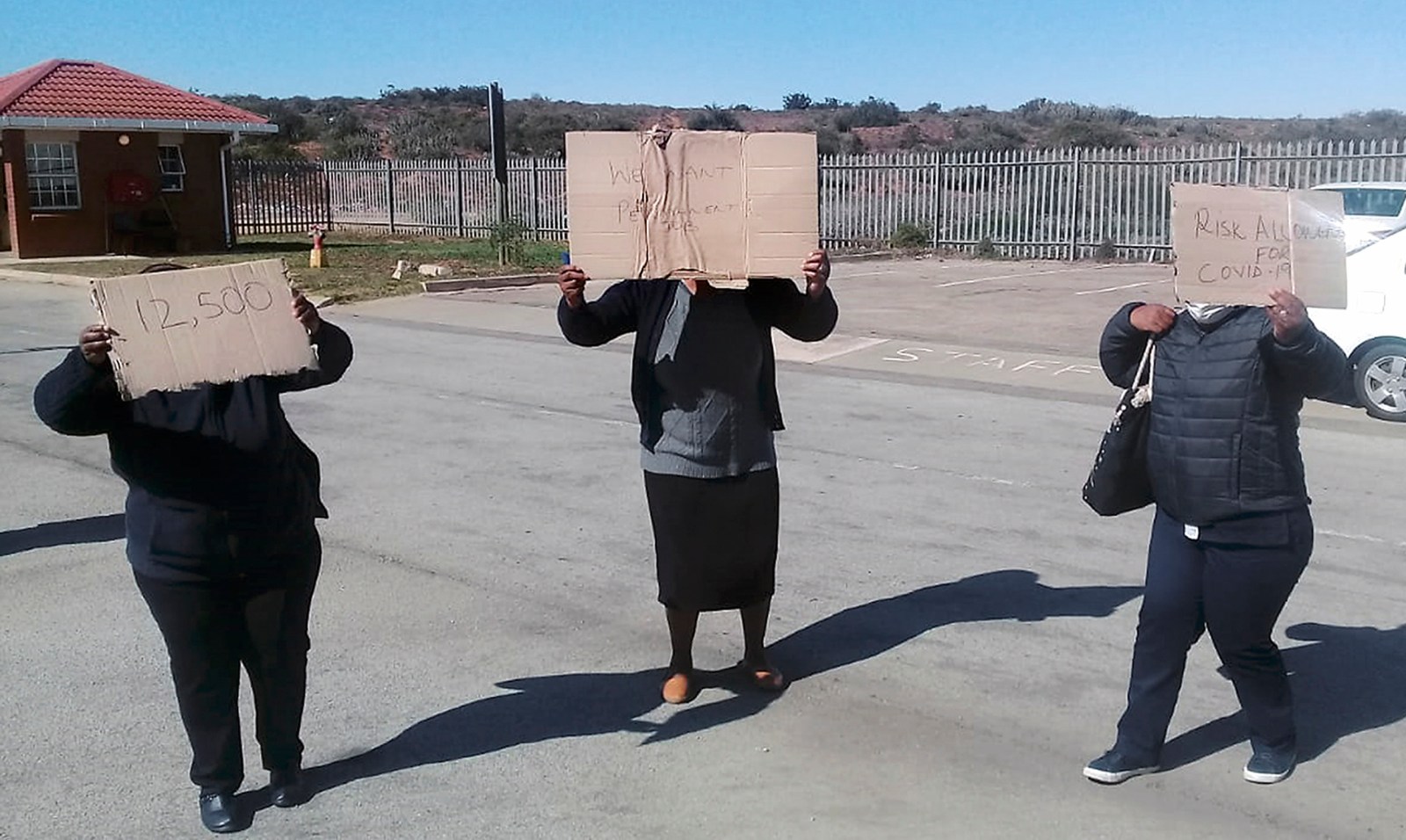 Eastern Cape community health workers who also serve on an oversight body for primary healthcare in the metro have been told that they will have to leave their positions on the health forum because they are temporary employees.

Community health workers employed to assist in Nelson Mandela Bay have claimed that the Eastern Cape Department of Health wants to exclude them from their positions in oversight positions on the District Health Forum.

Angry community healthcare workers gathered at the Laetitia Bam Day Hospital on Wednesday after rumours, that turned out to be false, surfaced that Premier Oscar Mabuyane was due to visit the facility. About 30 staged a protest in vain, but later remarked that at least the nurses had agreed to stop letting the patients wait at the gate of the hospital – which is in a very high crime area – and were helping them inside the clinic because they thought the premier would see.

Healthcare workers have been lobbying for permanent employment by the Eastern Cape Department of Health, but one of their leaders, Mzikazi Faku, said they had made no headway. Some of them have been working on contracts since 1992. Health workers have been assisting the department in screening the population for possible coronavirus infections.

“At this stage, we can’t even get a date for a meeting,” Faku said.

On July 16, after a group of 50 healthcare workers went to the department’s head office in Bhisho to seek answers about permanent employment, the police were called to remove them when they planned to spend the night at the office building. Police officers in riot gear used shields and stun grenades to chase the women away.

Faku said they have been struggling to open a case about the treatment they received. She claimed they were also shot at with rubber bullets.

She said the matter had been escalated to the national Department of Health for negotiations and there are still outstanding issues around qualifications and remuneration. She said the health workers were currently paid with grant money and they had to understand how it will affect the department’s cost of employment before agreeing to it.

At the same meeting, Mkhize confirmed that the permanent appointment of community health workers was being dealt with on a national level.

However, the chairperson of the Nelson Mandela Health Forum, Thembisile Nogampula, said on Friday they were told by the district health manager for the metro, Darlene de Vos, that as community health workers they cannot serve on the forum, which is one of the main oversight bodies for primary healthcare in the city.

The forum has consistently raised issues of patients with chronic illnesses battling to access medicine, the treatment of patients at clinics, issues with the lack of ambulances in the metro and problems with infrastructure at primary healthcare facilities.

Nogampula said he arrived late at the meeting, but his colleagues at the meeting said De Vos told them that they cannot serve on the forum because they have been employed as community health workers to assist the province with its Covid-19 response.

“She said it was the policy. I said, ‘you don’t know the policy.’ I asked, ‘which page are you referring to?’ ” He said the policy states that those who are permanently employed by the department cannot serve on the forum, but they were only appointed as temporary workers.

“We are pleading to your office for one last time to meet with us,” he wrote. “We are treated like rubbish. If you won’t talk to us we will meet with you on the ground and show you our levels of frustration.”

“I sensed that they were frustrated with us. They are gatvol of our protests. I said I am not going to sit down when things are going wrong. She doesn’t want activists on the forum.”

He said that they had requested clarity on the issue, but will start picketing at clinics if it is not resolved.

“We won’t let the forum collapse. We have done tremendous work across the Eastern Cape. We are the ears and eyes on the ground. We have been communicating with De Vos non-stop but have received no response from her office.

“Our oversight is too effective. They have no quality improvement plan. On Tuesday we will start mobilising,” he said.

Nogampula also complained that the Eastern Cape MEC for Health, Sindiswa Gomba, “never has time for us”.

He said they had, in an email, pleaded with Gomba to come and hear the frustrations of the community.

“We served for 10 years without expecting anything in return but she just ignores us. They think we are people who like riots, but we are not like that.”

“We are pleading to your office for one last time to meet with us,” he wrote. “We are treated like rubbish. If you won’t talk to us we will meet with you on the ground and show you our levels of frustration.”

De Vos explained that the District Health Forum was a structure consisting of clinic committee chairpersons.

“The clinic committee policy specifies criteria for membership. Community health workers may select an ex officio representative from amongst themselves but they do not qualify to serve on the forum in other capacities,” she said.

During a meeting on Friday with the Treatment Action Campaign, De Vos also said construction work at one of the biggest day hospitals in the district, the Laetitia Bam Day Hospital, had been abandoned after a contractor was not paid.

She said tents that were put up for the screening of patients with respiratory symptoms at this and other clinics would be removed as the structures get damaged by wind. They had received a donation of wendy houses that will be constructed for screening purposes. De Vos said finishing construction at the day hospital had been prioritised.

She admitted that patients were being attended to at the facility’s gate but said this was to triage patients, and a limited number of patients were allowed inside. DM/MC