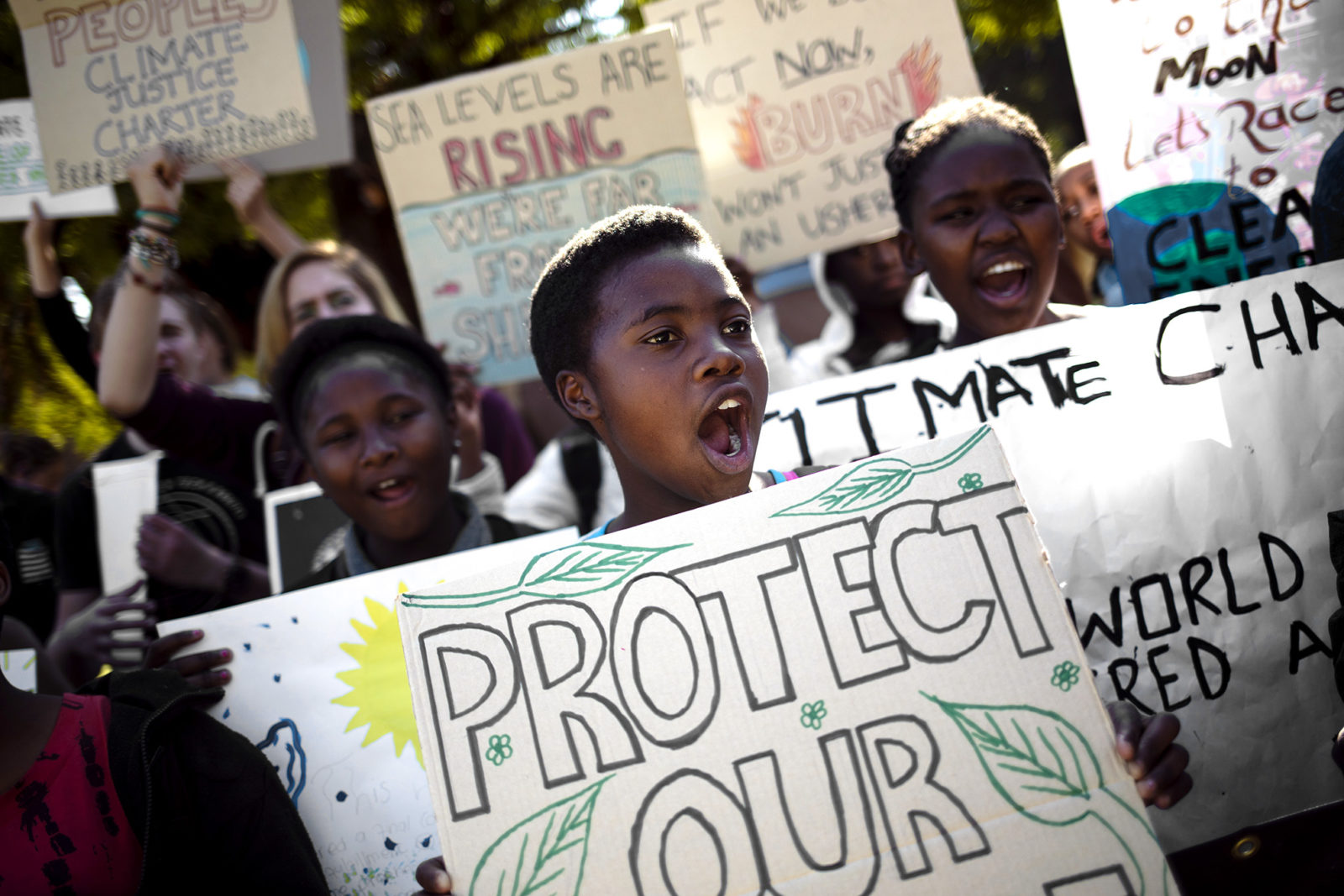 School children take part in a climate protest outside the Union Buildings as part of Youth demand climate Justice movement, Pretoria, South Africa, 14 June 2019. One of the groups involved in the movement is the internationally recognized Extinction Rebellion environmental movement. The majority of South Africa power is produced by coal fired power stations. Part of the youth message is to reduce this usage of coal. (Photo: EPA-EFE/KIM LUDBROOK)

Young people are too often told to ‘sit down and shut up’ when they make their views heard on how their futures are being stolen by politicians and corporations – but they are having none of it. They are demanding to be included in the discussions and actions that shape the world they will live in.

The pressure is on. We, the youth of today, are growing up in a society that expects us to fix all its problems. From racial justice to climate change to LGBTQI+ rights, we are looked to for leadership. And yet, this is contradicted by how changemakers view and engage with us. Because no matter how loud we shout, we are told to sit down and shut up.

All over the world, we are facing the same predicament. Our future is being pulled out from under us by politicians and corporations. As the youth of South Africa, and the world at large, we are tired of having decisions concerning our future being made by people who will not be around to deal with the consequences of their actions.

On 16 June 2020, the African Climate Alliance (ACA), joined by a coalition of youth partners, launched a campaign called “#TheFutureIs Now”. The campaign invited young South Africans “to turn our pain and rage into positive action” and have a say on what the future should look like.

Our campaign revolved around declarations of hope, and confirmations of commitment. Across the country, participants shared videos – first identifying an issue that affected them negatively, and next painting a picture of a world in which the issue no longer existed.

For too long, those in power have stood by, unaccountable, watching as our future slips through our fingers. Some may perceive us as naive children with a utopian dream, but one should not underestimate the dreamer. It is by proclaiming out loud the futures we imagine that we are rebelling.

Now, the United Nations’ International Youth Day (IYD) – 12 August – offers a chance to call for the engagement and participation of youth in decision-making at a global level. The theme for this year’s IYD is “Youth engagement for global action”.

All too often days like these prove to be purely ceremonial, or a way in which to tokenise youth action to drive an agenda for which we have not really been consulted. We can only hope that during 2020, engagement and participation will be more than the listless box-ticking we so often encounter.

To encourage the transformation of days like this, we are embarking on a week of action. Calling on young people to act on their vision and do what they can within their personal capacities – while being mindful of the Covid-19 pandemic – to start creating the future that they want.

We are also calling on civil society leaders at every level to move away from the tokenisation of youth into real consultative and meaningful interactions, and engagements to give us a voice on a national and a global level, so that our position at the table can become a more active one.

We may not all be able to vote in our elections, nor run the companies which rule the world, but we are able to act and act we will.

It is enshrined in the principles of democracy that the people have their say. In a country in which the struggle for democracy was such a crucial part of our history, it is imperative that we create a space for people to have control over the way their government is run. This means demanding effective communication between the government and the people. And this means hearing the youth. Modern democracies like ours must realise this is just as important as having us vote politicians in and out every five years.

Youth will no longer accept the weak excuses as to why we are barred from spaces and discussions in which our future is in question. It’s been mentioned hundreds of times before, but it must be understood: This generation of young people will be the last generation to experience such injustice.

We understand the systems that benefit the few and oppress the many. We understand, with the insight of those who fought before us. That is why this International Youth Day, we stand with young people all around the world and call for active change. We support the call to “shed light on the need to enable the engagement of youth by making local, national and global institutions more inclusive for the purpose of strengthening their capacity (and relevance) to achieve global action”.

Although our campaign officially comes to an end on 12 August 2020, it is one that echoes all that we stand for. We will continue to put in the heavy work, allowing us to transform our dreams into a sustainable and just reality. #TheFutureIs NOW. DM/MC