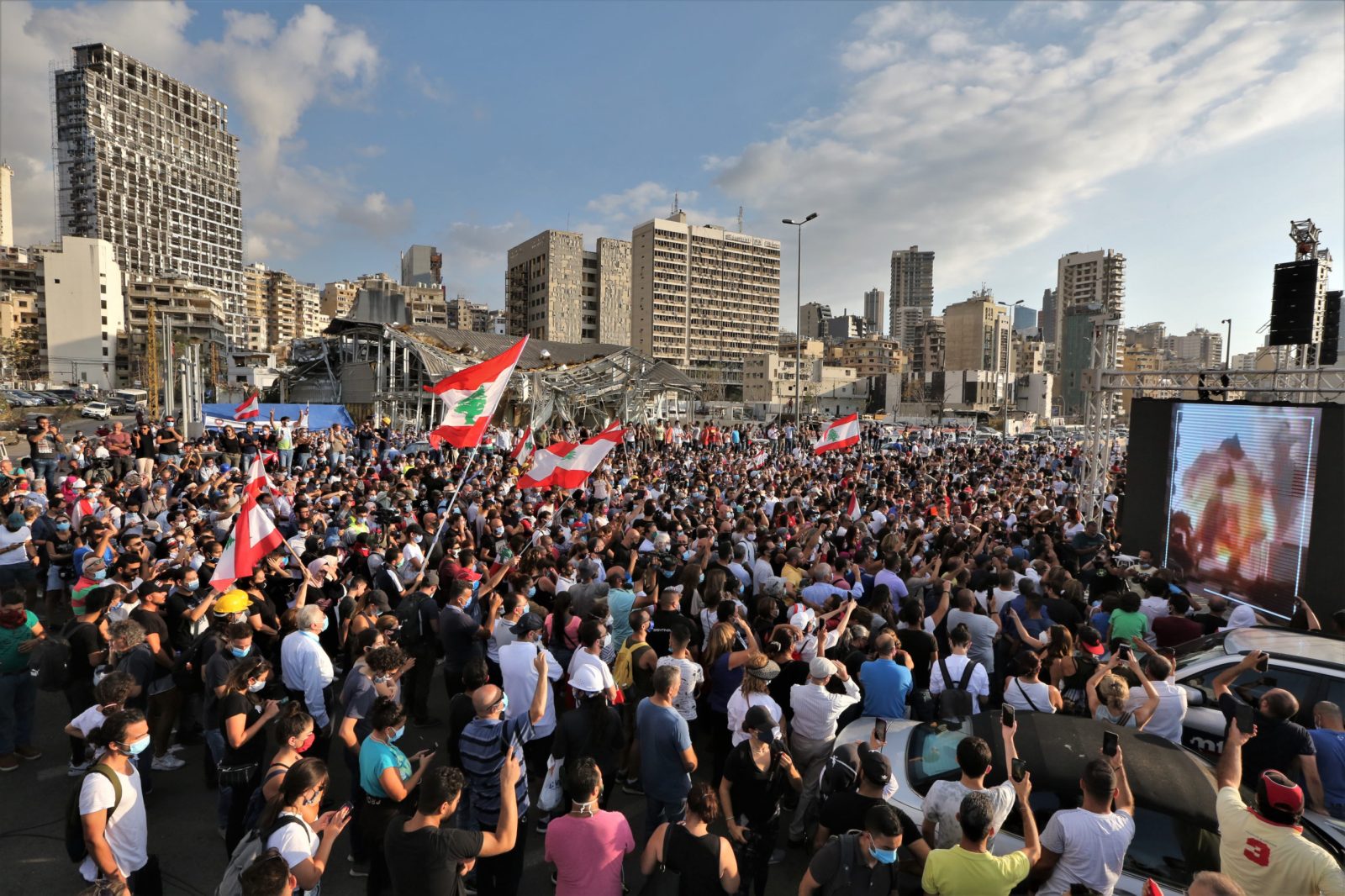 epa08597702 Anti-government protestors gather near the devastated harbor area to commemorate the victims of the explosion that took place just one week earlier, in Beirut, Lebanon, 11 August 2020. The Lebanese Health Ministry said at least 160 people were killed, and more than 6,000 injured in the Beirut blast that devastated the port area on 04 August and believed to have been caused by an estimated 2,750 tons of ammonium nitrate stored in a warehouse EPA-EFE/NABIL MOUNZER

BEIRUT, Aug 12 (Reuters) - Germany's foreign minister said on Wednesday that Lebanon needed a government that can fight corruption and enact reforms as he toured Beirut port, scene of the devastating explosion that has triggered protests and led the government to resign.

Last week’s blast at a warehouse storing highly-explosive material for years killed at least 171 people, injured some 6,000 and damaged swathes of the Mediterranean city, compounding a deep economic and financial crisis.

“It is impossible that things go on as before,” Foreign Minister Heiko Maas said. “The international community is ready to invest but needs securities for these investments. It is important to have a government that fights the corruption.”

“Many in Europe have a lot of interest for this country. They want to know that there are economic reforms and good governance. Whoever takes over responsibility in Lebanon has a lot to do.”

Maas gave a check for over 1 million euro to the Lebanese Red Cross, part of 20 million euros in humanitarian aid from Germany.

International humanitarian assistance has poured in but foreign countries have made clear they will not write blank cheques to a state viewed by its own people as deeply corrupt. Donors are seeking enactment of long-demanded reforms in return for financial assistance to pull Lebanon from economic meltdown.

The resignation of Prime Minister Hassan Diab’s government has plunged Lebanon into deeper uncertainty. Its talks with the International Monetary Fund for a bailout had already been put on hold over a row between the government, banks and politicians about the scale of vast financial losses.

Sitting amid the debris, Lebanese expressed their frustration at the state for abandoning them in their desperate efforts to rebuild homes and businesses wrecked in the blast.

“Who knows what will happen. How will we get back to business,” said Antoinne Matta, 74, whose safe and lock store was heavily damaged by the blast. Five employees were wounded.

“We in Lebanon are used to the government not doing anything.”

Unrest has erupted with Lebanese calling for the wholesale removal of a ruling class they brand as responsible for the country’s woes. The financial crisis has ravaged the currency, paralysed banks and sent prices soaring.

Officials have said the blast could have caused losses of $15 billion, a bill Lebanon cannot pay, given the depths of the financial crisis that has seen people frozen out of their savings accounts since October amid dollar scarcity.

The central bank has instructed local banks to extend interest-free dollar loans to individuals and businesses for essential repairs, and that it would in turn provide those financial institutions with the funding.

Bandali Gharabi, whose photo studio was destroyed, said that so far local authorities had only give him a compensation sheet to fill out. He does not know if the bank will provide financial assistance because he already has a car loan.

“Everything is gone,” he said. “I just want someone to rebuild my shop.”

President Michel Aoun has promised a swift and transparent investigation into the blast at a warehouse where authorities say more than 2,000 tonnes of ammonium nitrate was stored for years without safety measures. He has said the probe would look into whether it was negligence, an accident or external factors.

Reuters reported that Aoun and Diab were warned in July about the warehoused ammonium nitrate, according to documents and senior security sources.

The presidency did not respond to requests for comment about the warning letter.

Volunteers and construction workers with bulldozers were still clearing wreckage from neighbourhoods more than a week after the blast. Rows of destroyed cars were still parked in front of damaged stores and demolished buildings.

Nagy Massoud, 70, was sitting on the balcony when the blast gutted his apartment. He was saved by a wooden door that protected him from flying debris. A stove injured his wife.

His pension is frozen in a bank account he cannot access due to capital controls prompted by the economic crisis.

“Where is the government,” he said, looking around his shattered apartment.