Turning the Covid-19 tide, one life at a time 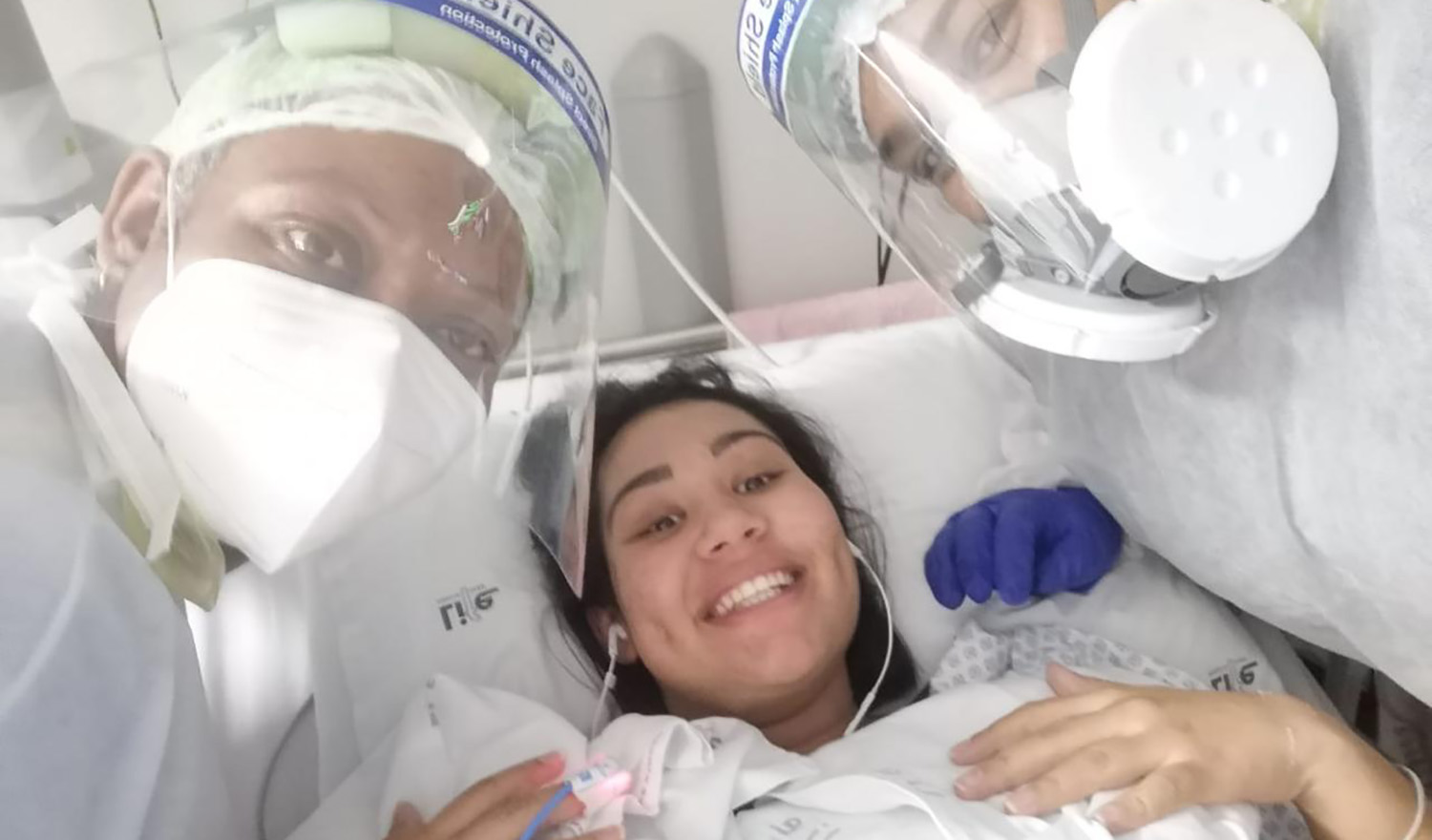 A day before being discharged from the hospital, Callan Jacobs poses with her nurses. (Photo supplied)

Doctors work tirelessly to save the life of a young woman and her unborn child.

During the week of her 19th birthday, on 9 July, expecting mother Callan Jacobs began feeling unwell. Her father, Kevin Jacobs, had also been severely ill that week.

Sherwood advised Callan to get tested for Covid-19.

“She sounded very congested on the phone. When we got the results back and they were positive, I contacted her again.”

Most of Callan’s immediate family had tested positive for Covid-19, excluding her 11-year-old sister.

“My brother was down for a couple of days and my father was severely ill,” says Callan. Her mother, Helga, tested positive, but was asymptomatic.

Callan said she was feeling reasonably okay at that point. With body aches and fatigue being her only two major complaints at that time, Callan and Sherwood decided that it was okay for Callan to self-isolate and recover at home.

“The advice at that point was for Callan to take all of her vitamins and to stay at home,” says Sherwood. Callan was to call her if, at any point, she could not feel her baby move or if she developed any respiratory symptoms and a fever.

On Monday 13 July, five days after testing positive for Covid-19, Callan became seriously ill. After vomiting for three days, Callan spiked a dangerously high temperature and she told her mother that she could not feel her baby move.

“We called Dr Sherwood and were told to get to Kingsbury hospital [in Cape Town] immediately,” says Callan.

Upon her arrival at the hospital, a team of nurses, along with Sherwood, were waiting for her in full personal protective equipment: scrubs underneath plastic aprons, disposable gowns, theatre cap, booties overshoes, goggles, visor, two layers of gloves, N95 masks — no skin exposed.

“She was flailing about and quite agitated,” says Sherwood, who explains that Callan had become hypoxic — she did not have enough oxygen in her tissues to sustain bodily functions.

After putting her on a simple safe oxygen supply mask, Sherwood noticed that the baby had an extremely fast heart rate, which was caused by Callan’s high fever and the viral infection.

Sherwood managed to do a scan of the baby and discovered that the baby had not grown at all since Callan’s last scan two weeks before.

Callan’s health had deteriorated rapidly and drastically at that stage, explains Sherwood. The priority was to keep Callan alive.

Due to severe dehydration, Callan’s veins had collapsed.

“I could not get a drip up on her and I tried several times. All the veins kept collapsing on me,” says Sherwood.

Callan was placed in the Intensive Care Unit (ICU), where attending physician Dr Asheen Haripersad was on duty.

“In the ICU, we had to try and return the physiology to normal just so that we could keep her and the baby alive, but she was quite desperately ill,” says Haripersad.

“We tried different manoeuvres, and different types of oxygen therapy. But this was clearly failing, and the saturation level was progressively dropping.

“It got to a point where we knew that she and the baby wouldn’t survive if she wasn’t put on to a ventilator. The problem was that even if we put her on the ventilator, there’s a certain amount of ventilator capacity. And she looked like she might not even cope on a ventilator. So, we called in our expert intubators.”

This is when anaesthetist Dr Guy Picken stepped in to assist with Callan’s critical care.

“I was assisting in the ICU that morning when Asheen and the other physicians decided to, to put Callan on a ventilator. Obviously, this was now a very challenging situation,” says Picken.

Picken explains that Callan was in severe respiratory failure after developing pneumonia in both lungs and her blood-oxygen saturation levels were at 50% despite high-flow nasal oxygen. To put this in perspective, a normal, healthy saturation level is at least 95%.

Picken adds that Callan was by far the youngest patient at Kingsbury Hospital who had “such severe Covid that she needed to be put on a ventilator”.

“Dr Haripersad called me to say that my daughter was not doing well and that she was going to be ventilated,” says Helga.

Doctors anticipated that Callan would need to be ventilated for around two to three days. However, the severity of her case led to Callan being ventilated for 11 days.

On the third day, Haripersad phoned Helga and said: “Mrs Jacobs, we are really struggling, you may want to come see her.”

“I know nobody can come into the Covid ward, but he told me to come in since I had tested positive for Covid anyway. I am only gathering now that he was trying to tell me that I may just want to come and say goodbye to my daughter,” says Helga.

“She had Acute Respiratory Distress Syndrome (ARDS), so her lungs were rigid, which made it difficult to ventilate. Lung physiology is quite complicated,” says Haripersad.

ARDS causes fluid to build up in the lungs and is often fatal.

“When we did a chest X-ray, it was so astonishingly bad. There was just a little area on the right upper lobe that looked untouched by disease that Callan was probably using to get oxygen, so there just was not enough space in a lung to oxygenate and ventilate.”

Callan was retaining carbon dioxide and she was not getting enough oxygen. Her oxygen saturation kept dropping, and Haripersad said she was hemodynamically unstable — the concern was inadequate oxygen supply to the organs and baby.

Callan’s case was further complicated when she developed bilateral pneumothoraces — air leaked in between the lung and chest wall.

Doctors had to release the air by creating two incisions between Callan’s ribs, which made ventilating her even more challenging.

“Normally when we put a patient on ventilation, the oxygen saturation jumps back up into close to normal figures quite quickly. That has been my experience with several other Covid intubations,” says Picken.

“We really struggled to get Callan’s oxygenation right.”

Picken says at one point, six specialists were working together to work out a way to “oxygenate and ventilate this young lady with a baby”.

“It was a very stressful situation and it was a difficult experience for us all,” says Picken.

Callan had developed several complications while on the ventilator, all of which doctors were able to address and treat quickly, says Picken.

At one stage, Callan developed septicaemia — a life-threatening complication which occurs when chemicals released into the bloodstream meant to treat an infection trigger inflammation throughout the body.

The majority of pregnant women who contract Covid-19 will have mild to moderate symptoms; however, pregnancy has been classified as a high-risk factor when it comes to developing complications, something neither Callan nor her mother was aware of.

Callan was assessed every hour for the next several days, with staff checking on how Callan was coping on the ventilator and whether she required more or less breathing assistance.

Haripersad explains: “It fluctuated a little, but on a day to day basis. Slowly, her difficulty in breathing improved and we could gradually withdraw some of the lung support that she required. Towards the end, she was fully awake and fully co-operative. She was playing on her cellphone as I am sure you can imagine she was bored out of her mind.

“The support staff were fantastic in Callan’s recovery; they were instrumental in helping her through this.”

The Jacobs do not have medical aid, but Helga says that she was not prepared to send her daughter to a public hospital.

“I said I will sell my house and my car, but my daughter will go to a good hospital. I believe that is one of the reasons why she survived, because they gave her great care and the way they have been taking care of Covid patients with such a great success rate is comforting to me.”

The work culture at Kingsbury is one of teamwork, communication, and compassion. Covid patients are not allowed to receive visitors, the ICU staff provide patients with tablets to video-call their loved ones daily.

“This team’s work has been a real story of success at Kingsbury and Callan’s interventions and requirements put this system to a test. The system really showed its value with Callan’s situation,” says Picken.

The majority of pregnant women who contract Covid-19 will have mild to moderate symptoms; however, pregnancy has been classified as a high-risk factor when it comes to developing complications, something neither Callan nor her mother was aware of.

“If you are pregnant and have severe symptoms of Covid-19, you do so much worse compared to non-pregnant women in the severe phase.”

In June, a study by the Centre for Disease Control demonstrated how a pregnancy puts you at a much higher risk for Covid-19 related complications.

At 13 weeks, Sherwood found that Callan was at risk for preeclampsia and the baby was at high risk for growth restriction:

“The baby was compromised going into this Covid sickness and would be further compromised by it as we know Covid causes intrauterine growth restriction. This would thereby worsen the baby’s situation and because the baby is viable, we had a big ethical dilemma on our hands.

“We could have done a C-section on her to save the baby but owing to her deteriorating state we decided against it.”

Sherwood says a C-section would have compromised her even further.

“It was a very difficult decision, but ultimately one that I think saved her life,” adds Sherwood.

Callan is the first pregnant woman in South Africa whose unborn baby survived her mother being ventilated while recovering from Covid-19.

On the road to recovery

Callan is now on the mend and recovering at home. She is due to have a foetal MRI in the next few days to reveal whether the baby sustained any permanent damage, but they remain hopeful.

Callan was due to give birth in seven weeks; however, her delivery date has been scheduled for three to four weeks from now (depending on the results of the MRI).

“The doctors are worried that the baby might get too big and then crush my lungs,” says Callan.

Sherwood adds that the baby has flourished since, gaining a third of its body weight in the ICU.

Callan warns people not to think of Covid-19 as some “flu that you get over”.

“The funny part is, my whole family was like that and then overnight everything changed,” says Callan.

Sherwood says the “guillotine” of Covid-19 that hangs over us is that we do not know whether we will have mild, moderate, or severe forms of the disease.

Callan was a healthy 19-year-old woman with no pre-existing conditions, but her whole life was turned upside down after contracting Covid-19.

“Now, more than ever, people need to take precautions because they do not understand and realise the seriousness of this disease. If you had to see what I looked like at my worst, you would be more cautious,” says Callan. DM/MC