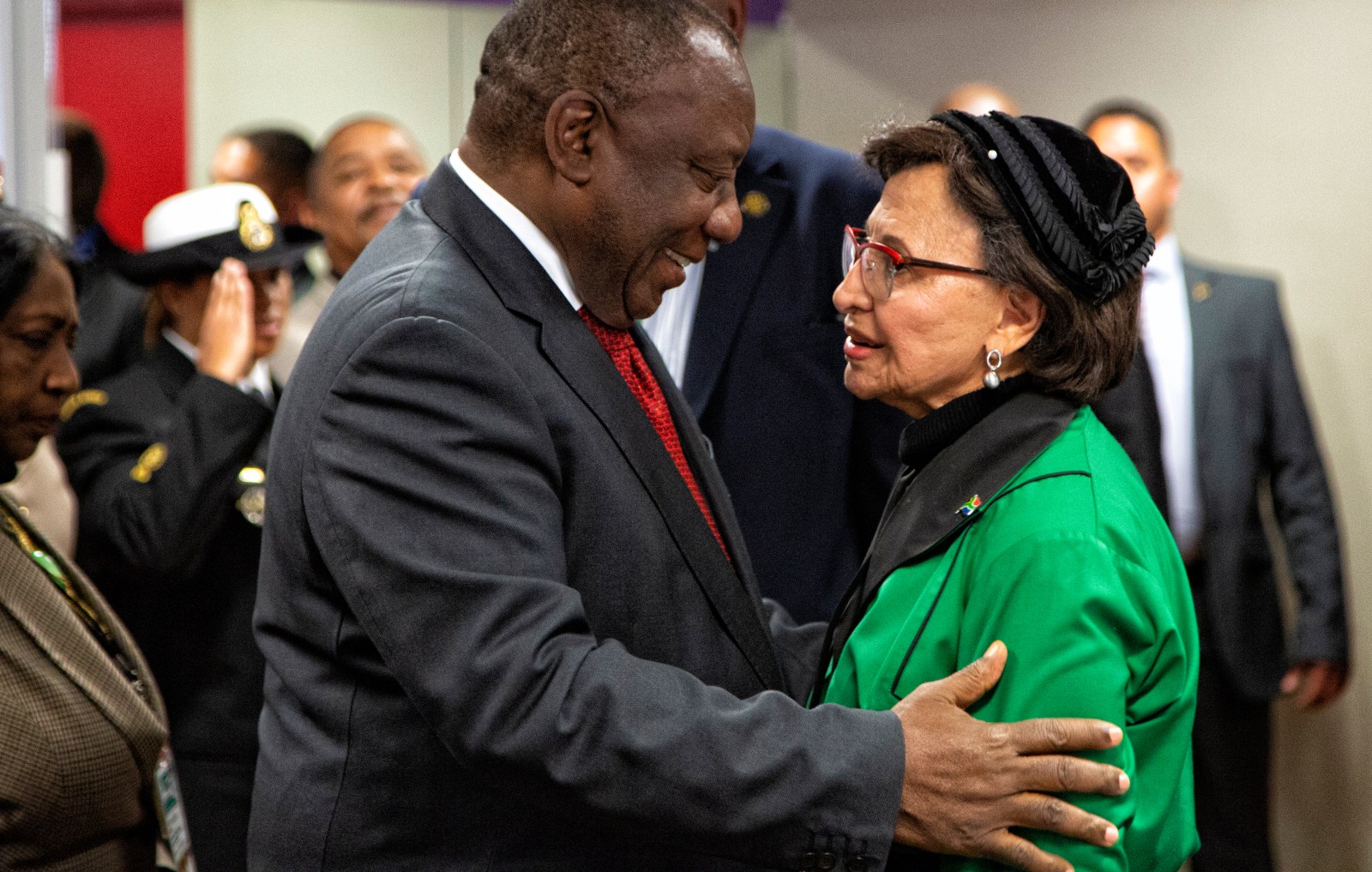 This is a summary of the trending, highest impact, and most active themes and their narratives related to social cohesion and division in South African public-domain social media conversations from 7 to 10 August 2020.

On Women’s Day, social media conversations reflected on many women who contributed to South Africa’s liberation as the country commemorated the 1956 march to the Union’s Buildings by women to protest against the carrying of pass books. 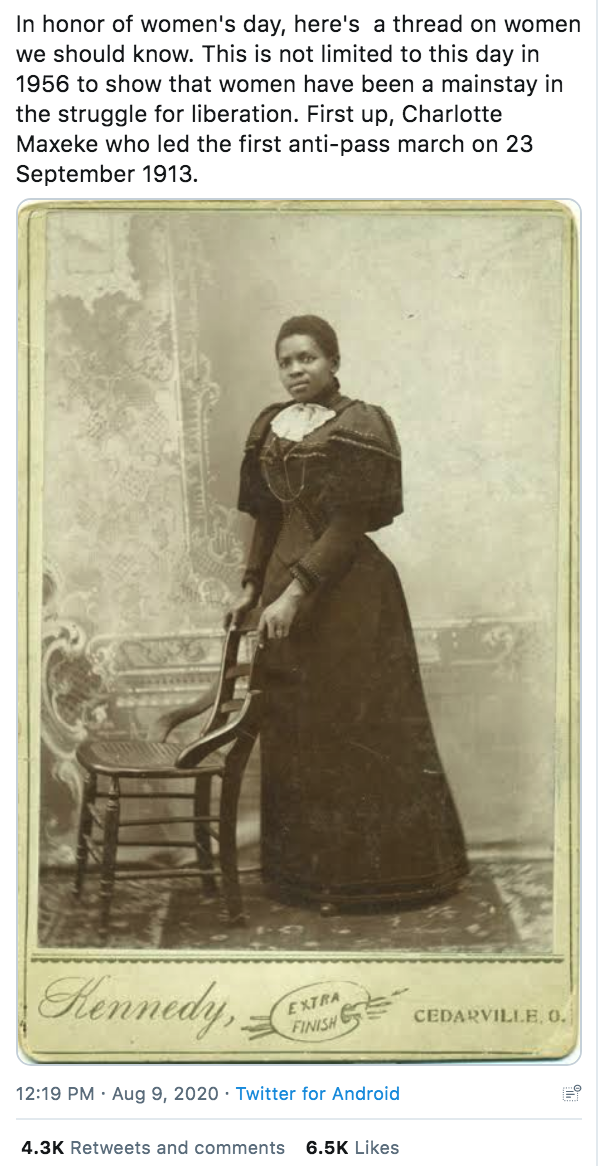 Among the day’s high circulating tweets was this one from Soccer team Kaizer Chiefs (@KaizerChiefs): “Happy Women’s Day to all the women out there. May your day be filled with love, peace and happiness. #KCWomen #HappyWomensDay #Amakhosi4Life.” This received over 1,100 likes and 216 retweets by Tuesday morning.

Mr Mbulazi (@Mr_MbulaziSA) shared: “May your Women’s Day be filled with love and respect that you deserve. Happy #WomensDay2020.” This post received 208 likes and 157 retweets.

Zikhona Valela (@valavoosha) shared a thread of tweets with details about South African women who played a part in South Africa’s liberation movement. The thread highlighted women who led several movements that culminated in the historic 1956 march. Zikhona started with Charlotte Maxeke who led the first anti-pass march and founded the Bantu Women’s League, commonly known as the ANC Women’s League: “In honour of women’s day, here’s a thread on women we should know. This is not limited to this day in 1956 to show that women have been a mainstay in the struggle for liberation. First up, Charlotte Maxeke who led the first anti-pass march on 23 September 1913.” The thread mentions a list of women who influenced the South African political landscape. The thread received over 6,500 likes and 4,300 retweets.

Many women challenged stereotypes. Invictus (@LethicaNair) tweeted: “I have zero desire to be known as a strong woman. Pls.” The tweet received over 4,400 likes and 1,900 retweets, with one comment stating: “No to mbokodofication (Ngcobo, 2020)” referring to the saying “you hit a woman, you hit a rock”.

Over the weekend conversations about the history of racism garnered significant attention on Twitter.

@SizweLo shared a six-part thread starting with: “Colonialism and apartheid made the dehumanisation of black people in all facets of life, including workplaces, normal. The treatment of black people in organisations is therefore based on the assumption that they are inferior to white people – Prof, William Gumede.” This tweet received 216 retweets and 361 likes.

The topic of institutionalised racism prompted several Twitter accounts to use the hashtag #RacistBanksMustFall and share their reflections on discrimination in South African banking.

@Advovolicious shared a photograph of the FNB and Wesbank headquarters with the message: “In 2018 more than 4,000 bank customers were charged 30% more than whites on mortgage loans at FNB. This discrimination against black people is not acceptable. In 2020 most black businesses and individuals who applied to banks for relief funding were rejected #RacistBanksMustFall.” This tweet got over 1,200 retweets and over 2,100 likes.

The following day, in a tweet of a photograph of President Ramaphosa and a Standard Bank branch, @Advovolicious sent this message: “If you thought Cyril Ramaphosa will address the issue of banks being racist towards black people you need to forget it, remember Cyril is a capitalist that is motivated by money hence he has shares at Standard bank. He is part of the problem. #RacistBanksMustFall  #CyrilMustGo.” This was retweeted 411 times and liked over 1,500 times by this morning.

Some users shared their opinions on why inequality continued to prevail. On Sunday President of the Mining Forum of South Africa @BlessingsRamoba tweeted: “Black people in South Africa are suffering under the black govt rule, and still blaming white people. We as blacks must take responsibility for our own actions and failures. We keep on voting corrupt people in government and hoping for change, impossible! We must now take the blame!” This tweet received 568 retweets and over 1,700 likes by today.

@BlessingsRamoba commented on the post: “This is calling for self-criticism and introspection amongst us blacks.”

Ace Magashule is a complete and utter disgrace. Every time he opens his mouth he creates controversy. If South Africa was to be a successful nation, the ANC must find a way to remove this disgraceful man as SG of the ANC.

Many South Africans expressed their discontent with the ruling party over the weekend, raising questions about the sanctity of life in these troubled times.

@PhumlaniMMajozi’s tweet claimed the Minister of Health Dr Zweli Mkhize was not listening to scientific experts on #Covid19 when making decisions around the pandemic: “if you vote for these people next time then the problem is you. You are the problem!” The post was retweeted close to 500 times and received more than 1,000 likes.

@goolammv tweeted strong sentiments about Ace Magashule, who has recently been drawn into a PPE scandal: “Every time he opens his mouth, he creates controversy.”  The post called on the ANC to remove him from office. It was retweeted over 140 times and received close to 600 likes.

In a satirical post @du_ku tweeted images of former President FW de Klerk with Pravin Gordhan and Trevor Manuel, calling them “ANC STALWARTS.” The post was retweeted close to 400 times and received more than 700 likes. In the comments, he added images of Fikile Mbalula, Malusi Gigaba and others, labelling them as “ANC Presidential candidates”, followed by emojis crying with laughter.

@SciTheComedist tweeted: “Good Morning South Africa and #VoetsekANC.” This post was retweeted more than 600 times and received close to 2,000 likes. 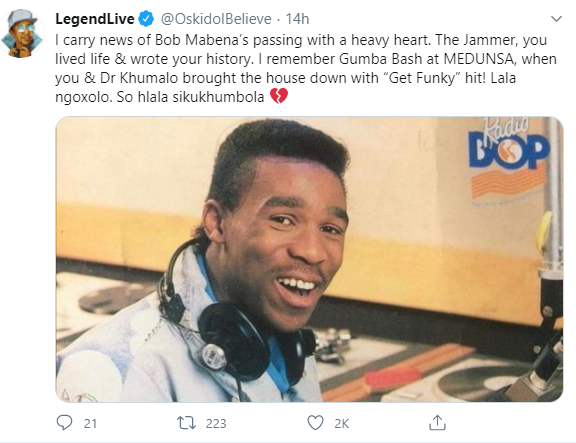 The passing of South African radio presenter Bob Mabena trended as Twitter users paid tribute with messages of support and condolences. Radio station @kayafm95dot9 shared a photograph of Mabena in a tweet: “We are saddened to hear of the passing of Bob Mabena. May his soul rest in peace and his legacy live on. #RIPBobMabena”. This tweet generated over 4,200 retweets and over 11,800 likes by early this morning.

Producer and musician @OskidoIBelieve shared a photograph of a young Bob Mabena: “I carry news of Bob Mabena’s passing with a heavy heart. The Jammer, you lived life & wrote your history. I remember Gumba Bash at MEDUNSA, when you & Dr Khumalo brought the house down with Get Funky hit! Lala ngoxolo. So hlala sikukhumbola.” This tweet received 222 retweets and nearly 2,000 likes.

DJ Sbu’s podcast @TheHustlersCSA shared a video interview with Bob Mabena with the message: “REST IN PEACE BOB MABENA. It was an honour to spend time & learn your entire life story. Condolences to the family, friends, colleagues and loved ones. A great loss to the media that industry. Thank you for the inspiration. Full video : https://youtu.be/DKe6JRzRjlo  #RIPBobMabena.” This tweet received 735 retweets and over 2,300 likes.

Radio host @ernest_pillay shared a photograph: “Bob Mabena was a brother, friend and fellow broadcaster. He was unquestionably one of the greatest pioneers of urban contemporary radio of our generation. I’m devastated by his passing – it cuts deep. May your soul rest in peace my brother. #RipBobMabena.” DM