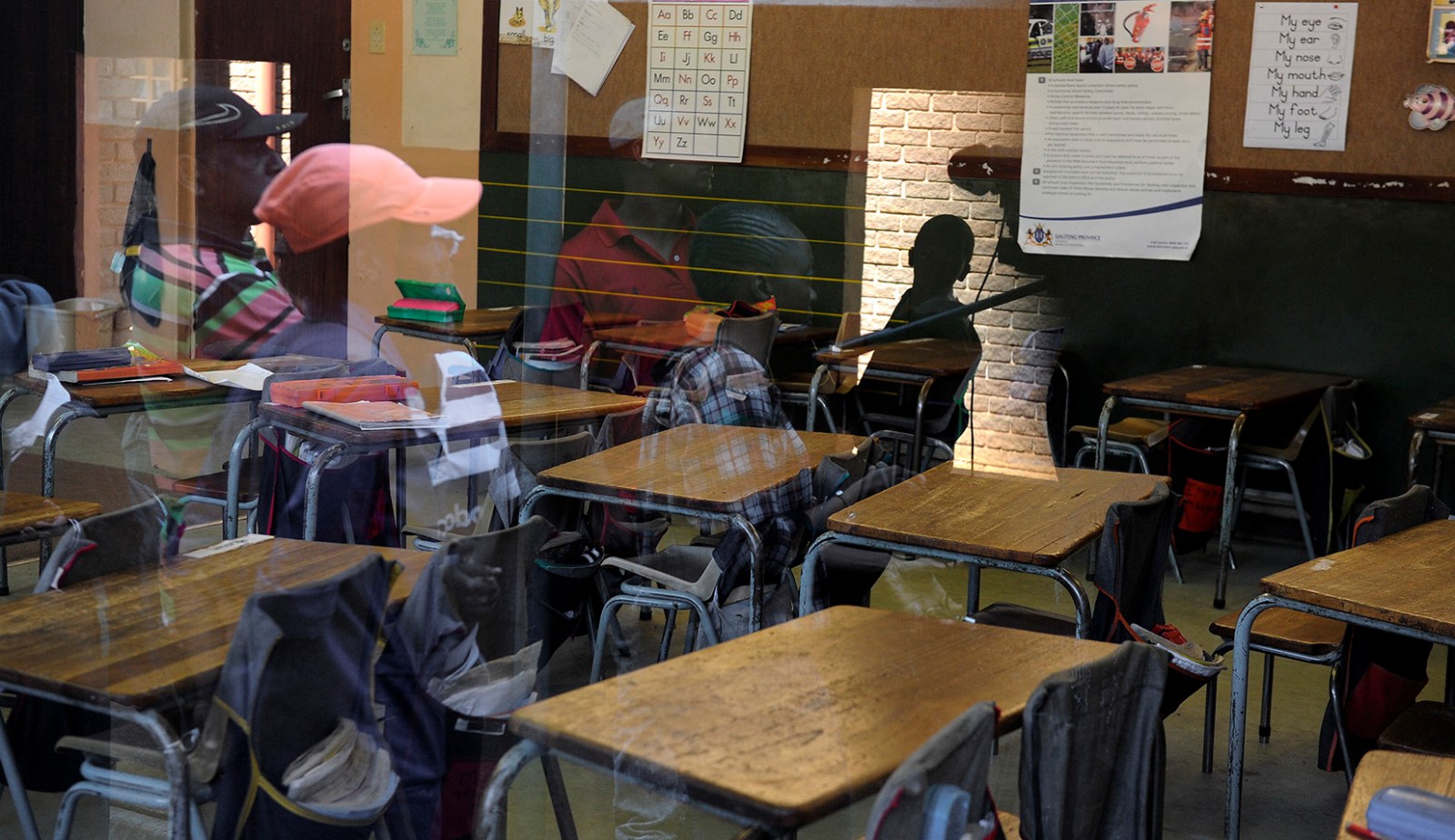 JOHANNESBURG, SOUTH AFRICA –AUGUST 17: One of the classrooms at Roodepoort Primary School on August 17, 2015 in Johannesburg, South Africa. Gauteng education officials told the teachers at the school to report Lufhereng Primary School, where they have been temporarily moved. The school came under fire for racial discrimination in February this year. (Photo by Gallo Images / Beeld / Felix Dlangamandla)

Access to quality education for many children in South Africa is filled with roadblocks — and it’s especially so for migrant children. More damning perhaps is that the plight of these children is regarded as a side issue. It is a blind spot, blurring the reality that the failure to give more children access to quality schooling impacts negatively on everyone in the country.

Jemi Luzinga is a 15-year old Joburg schoolboy raised by a migrant single mother. He remembers the start of his primary school days as “suffering — walking, because there wasn’t money for transport, going from place to place to get documents so that I could be accepted for primary school”.

Jemi was one of the speakers at the fourth webinar in the “Building Solidarity in Time of Covid-19” series, focused on access to basic education.

“My mom went through it all; she is my hero. She knew that I had to get an education because it is the key to success. We were lucky because we eventually found the Three2six project,” he said. Three2Six is an education project hosted by partner schools between 3pm and 6pm (hence the project’s name). The focus is on helping migrant children with bridging classes in English, maths and life skills. The project had its start at Sacred Heart College in Observatory in 2007, where Jemi is now a pupil.

Another Sacred Heart College pupil, Tanya Kaseke, also spoke on the webinar panel. She said even when migrant children are able to access education in South African schools they face labelling and stigma.

“When you are labelled ‘other’ or as a foreign national, that status stays with you forever. Even though we know education is the gateway for success, we know that education is not just about access, it’s also about your social experience in that climate.

“You hear these xenophobic slurs and offensive jokes, like being called a ‘border jumper’. It is undermining and belittling; it makes it harder for someone to want to succeed in that toxic, hostile environment,” she said.

Tanya also called out the contradictions in South African laws and the lack of communication between government departments that still leave children falling through the cracks.

In December 2019, the Makhanda High Court ruled in favour of the Phakamisa High School and 37 learners. The full bench’s ruling in their case against the Department of Education has forced the government to uphold the Constitution and grant all children access to basic education in spite of their being unable to produce birth certificates or identity documents.

Tanya said, however, that despite this victory, Section 39 of the Immigration Act still prohibits “learning institutions to knowingly provide training and instruction to an illegal foreigner”.

“Because of this, immigrant children are always under threat of being reported, which means they can’t entirely enjoy their school experience,” she said.

Attorney Alexandra Klonarides, from the Centre for Child Law, reiterated this precarious position for children even as “migrant children and undocumented children don’t choose to be such”.

Equal Education’s general secretary Noncedo Madubedube pointed out the impact of Covid-19 has again laid bare inequalities and structural failings. It means black children – documented, undocumented and those in poorer schools — are falling further behind even as more of the school year slips away.

Klonarides said birth registration is the key to unlocking all access and without it, there is a distinct barrier to accessing education. She also highlighted how inconsistencies in the law create challenges. It’s the likes of fathers of children born out of wedlock being unable to register their children’s births. Also, schools lose their funding and government support if they can’t provide identity documents for children attending their schools.

This fourth webinar in the series took place in a week when South Africa’s neighbour, Zimbabwe, had again exploded in fresh crises. President Emmerson Mnangagwa’s government has been seen to act with brutal heavy-handedness in a clampdown on whistleblowing journalists who have raised the alarm on corruption, activists speaking out against shrinking civil liberties in that country and citizens taking to the streets to protest.

Unfolding events are a reminder of the horror origin story of why people flee the countries of their birth in the first place – why undocumented children come to be in the situation they find themselves in.

Nicholas Wolpe, CEO of the Liliesleaf Heritage Site, said in his opening remarks that what is happening in Zimbabwe calls for the idea of solidarity to be “imposed and applied in a global context” — not shrunk in significance by not being able to reach an audience beyond a webinar or not being able to stimulate campaigns and network building needed to push government to deliver.

Wolpe also slammed the ANC government’s education policy as a “flip-flop” exercise. He said over the past 26 years policy has not been coherent or formulated in a way to achieve basic education for all.

Equal Education’s general secretary Noncedo Madubedube pointed out the impact of Covid-19 has again laid bare inequalities and structural failings. It means black children – documented, undocumented and those in poorer schools — are falling further behind even as more of the school year slips away.

“We are seeing that the education budget has been in decline per learner and this puts an unequal strain on rural and township schools in particular,” she said.

Madubedube said there are questions around the National Solidarity Fund prioritising emergency education funding. She warned that schools are already facing budget trade-offs such as paying electricity bills or paying for the likes of sanitisers, PPE and other necessities to protect against the coronavirus. DM/MC