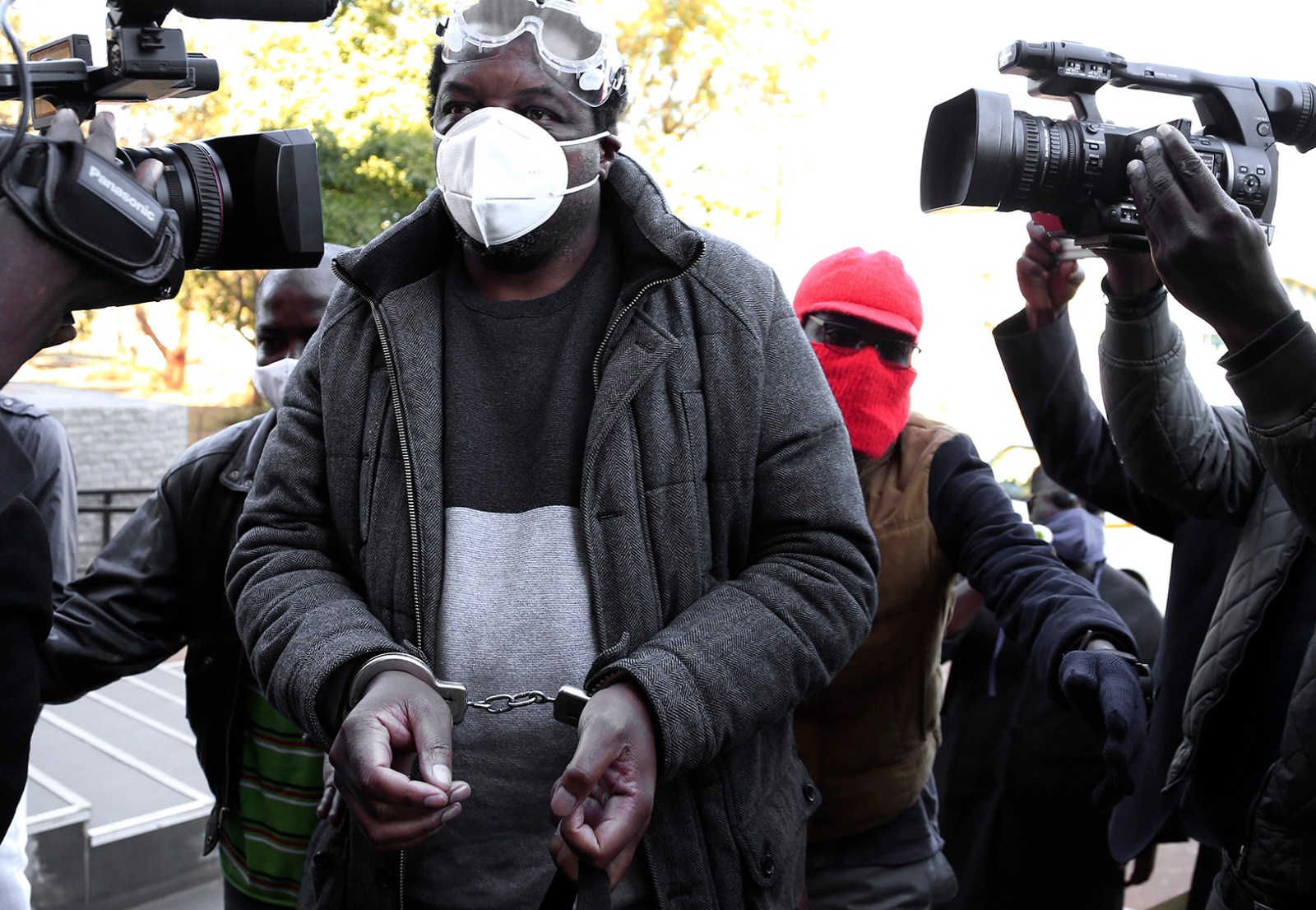 This is a summary of the trending, highest impact, and most active themes and their narratives related to social cohesion and division in South African public-domain social media conversations on 5 August, 2020.

As the Zimbabwean government continued to arrest those critical of the government, @advocatemahere informed readers that Hopewell Chin’ono has been imprisoned in Zimbabwe. This post was a significant driver of volume yesterday having been retweeted 4,600 times and liked 5,600 times by Friday morning.

On Thursday night @Wamagaisa tweeted that a 22-year-old Zimbabwean woman has been arrested for allegedly “insulting the president” in a WhatsApp group.

Many have condemned the human rights abuses in Zimbabwe. The United Nations Secretary General released a statement urging the government of Zimbabwe to respect its citizens’ fundamental human rights. A tweet by @PacheduZW featuring the former president of Botswana, Ian Khama, wearing a #ZimabweanLivesMatter T-shirt trended online. Trevor Ncube (@TrevorNcube), a Zimbabwean newspaper publisher, tweeted yesterday that he supports the “right of citizens to protest peacefully” and he is “against corruption, abductions, [and] torture”. The three media items, all published on Twitter on 6 August had received well over 15,000 user engagements by today.

There has been a steady increase in calls for international intervention in Zimbabwe. President Cyril Ramaphosa has been criticised by some for releasing a statement on the explosion in Lebanon while remaining silent on the unfolding situation in Zimbabwe. Henry Chivangu (@ChiviCentral), a Zimbabwean human-rights activist, tweeted that as the chair of the African Union, Rhamaphosa “has ignored the cries of millions of Zimbabweans next door”.

Mmusi Maimane, former head of the DA, announced yesterday that he had formally requested a meeting with the Consul General of Zimbabwe in South Africa. The EFF has also expressed concern about the human rights abuses in Zimbabwe. Yesterday the official EFF Twitter account @EFFSouthAfrica tweeted a video of their leader, Julius Malema, speaking at a rally. Malema called on President Emmerson Mnangagwa to respect human rights. He also spoke about African people as having been divided by artificially created borders. The EFF tweet received 2,100 retweets and 4 200 likes. Some members of the xenophobic #PutSouthAfricansFirstMovement responded combatively to the tweet.

A thread on Twitter by Zimbabwean Politician and Member of Parliament Temba P Mliswa (@TembaMliswa) has resulted in heated exchanges online. He stated that a dogmatic leader was needed for Zimbabwe and that ideals such as Freedom of Speech are not accepted in Zimbabwe. In another, he said that “Currently we are hyped about #ZimbabweanLivesMatter but those lives have always mattered. What’s the difference now? The real hashtag should be #AllLivesMatter”. He also called on Zimbabweans to wait until the 2023 elections, and not to “seek some Arab Springs scenarios here”. The four tweets, all authored on 6 August, received over 3,500 user engagements online. Responses were divided along party political lines, with online commentators being both supportive and critical of his comments.

Moving into a Bigger warehouse during a Pandemic. Employing more people during a Pandemic. The love and support shown to Drip is very humbling. I’m humbled by the love. Black Businesses will never ever look the same after this. Black Child, Dream and just start. Ke a leboga!!! pic.twitter.com/SSVYcoYQFR

Conversations around financial struggles received a significant amount of attention on social media. Many Twitter users expressed support, particularly for young people who required assistance for their education fees.

@CeeAmonye shared an image containing information about a 19-year old UCT student who had recently been financially excluded. The tweet read: “Hey guys. My friend Keith needs help  raising funds for uni. He is extremely hardworking and despite this setback, he has managed to stay positive and focused . He deserves to complete his degree and with your generous donations, I believe he will. Nothing is too small. 👇🏼👇🏼👇🏼.” This tweet received over 3,400 retweets and over 1,300 likes by today.

Several Twitter users shared posts celebrating their professional successes. @LekauSehoana shared three photographs of a warehouse. The tweet read: “Moving into a Bigger warehouse during a Pandemic. Employing more people during a Pandemic. The love and support shown to Drip is very humbling. I’m humbled by the love. Black Businesses will never ever look the same after this. Black Child, Dream and just start. Ke a leboga!!!” This tweet gained traction yesterday with 480 retweets and over 3,400 likes.

@Lavender_Isis shared a similar promotional post which contained four photographs of a woman modelling different clothing items. The tweet read: “The owner wearing the brand…. I Made all these outfits 🤗 @Lvnder_online on insta. Website link in bio. Kindly RT my customer could be on your TL 🙏🏾. #GirlsTalkZA #GirlzTalkZa #GirlTalkZA.” This tweet got over 1,700 retweets and over 5,700 likes.

Later @Thola_md tweeted: “So your girl bagged a permanent position on Monday. My late mom and I used to pray for this job, I used to hear her begging God in the middle of the night, she knew that getting this job would change our situation at home for the better. God has finally remembered me. 🥺🙌” This was retweeted over 1,000 times and liked over 13,000 times.

Lockdown has led to a rise in retrenchments and many salary cuts. This has prompted many to sign up for WhatsApp gifting. The National Consumer Commission says it is more of a pyramid scheme than a stokvel and has declared it illegal. Do you think this is fair?

Stokvels are a popular way of saving money among many South African communities. However, since the national Covid-19 lockdown, a new form of stokvels called WhatsApp gifting has surfaced. These WhatsApp stokvels have recently been outlawed.

TV news channel @Newzroom405 shared a Twitter poll in a tweet: “Lockdown has led to a rise in retrenchments and many salary cuts. This has prompted many to sign up for WhatsApp gifting. The National Consumer Commission says it is more of a pyramid scheme than a stokvel and has declared it illegal. Do you think this is fair?” This poll generated 299 votes, 65 comments, 5 retweets and 3 likes. (Final Results: Yes = 50.8% and No = 49.2%.)

A number of Twitter users shared humorous content related to money. On Tuesday, 4 August 2020, @kxtyscandy shared a video of someone cracking a piggy bank open with a hammer. The tweet read: “if you don’t rt, you’ll be broke by next month.” This tweet resurfaced in Thursday’s trends with nearly 95,000 retweets and over 43,600 likes.

This brown skin girl chat really presses me cause dark skin girls grew up listening to songs PRAISING light skin girls. Now that there’s a song literally celebrating dark skin its “wHy CanT it Be fOr eVerYone”. No it’s for dark skin girls end of.

Following the release of Beyonce’s #BlackIsKing project, Twitter users have debated the meaning behind some of the symbols she used. One of these debates centres on the song “Brown Skinned Girls,” raising questions around colour sensitivities within the black community. @zaliakhoza tweeted: “This brown skin girl chat really presses me cause dark skin girls grew up listening to songs PRAISING light skin girls. Now that there’s a song literally celebrating dark skin it’s ‘wHy CanT it Be fOr eVerYone’. No it’s for dark skin girls end of.” This received considerable attention on Thursday with 900 retweets and over 2,400 likes.

The announcement of rapper Nasty C’s album release trended under five drivers in  the day’s top topics by volume and burst. On Thursday, 6 August 2020, @Nasty_CSA shared a link to the album artwork in a tweet that read “ATTENTION!!! ZULU MAN WITH SOME POWER Is dropping THIS MONTH!!!! I need every single one of fans to support and show me some love! I worked very hard on this and it took a long time, but we’re here now. ARTWORK -”. This tweet received over 2,800 retweets and over 9,200 likes. DM