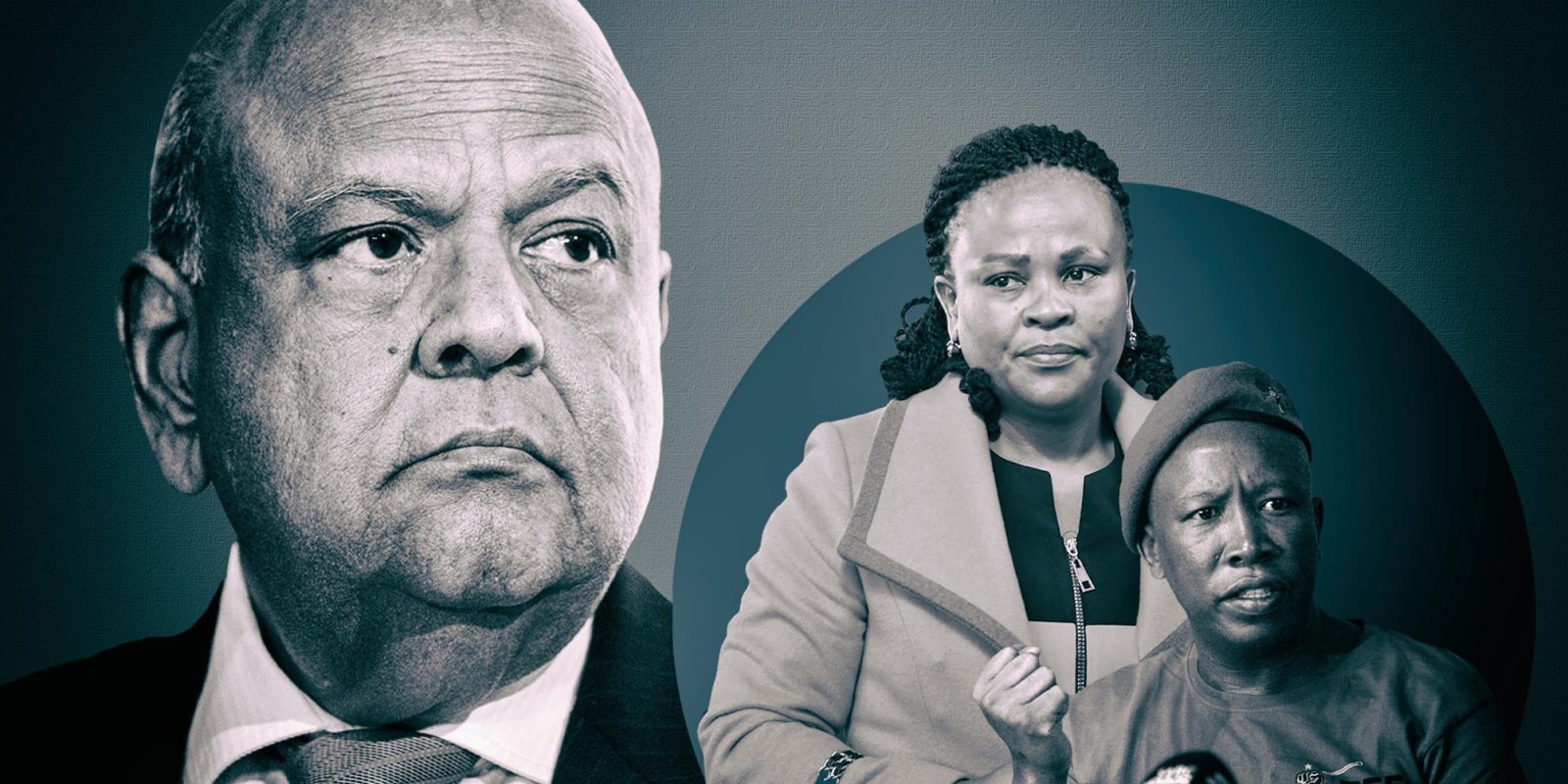 Busisiwe Mkhwebane ordered the Minister of State Security to implement the findings of a classified 2014 Inspector-General of Intelligence report she had never seen, read or even interrogated and which has subsequently been declared unlawful.

So said advocate Kgomotso Moroka, counsel for the Minister of State Security, Ayanda Dlodlo, in support of now Minister of Public Enterprises Pravin Gordhan’s bid to have the public protector’s 2019 report and remedial action in the SARS “rogue unit” investigation set aside and declared invalid.

As part of her remedial action, the public protector ordered President Cyril Ramaphosa, the Speaker of the National Assembly, the Minister of State Security, the National Director of Public Prosecutions, the Commissioner of the South African Police Services and the Inspector-General of Intelligence (IGI) to take disciplinary steps against Gordhan.

In 2019, the court granted Gordhan an interim interdict to stay the remedial action ordered in the public protector’s report and which is currently on review. An appeal against the interdict by the public protector, joined by the EFF, was heard by the Constitutional Court on 28 November 2019 with judgment reserved.

On Thursday the court heard Part B of Gordhan’s application.

Moroka said not only had the public protector misunderstood the legal nature of Dlodlo’s original bid to strike the Radebe report from court papers, but had also acted beyond her legal powers in instructing Dlodlo to implement remedial action.

Dlodlo had sought to strike the document only because it exposed the names of SSA operatives and their methods, said Moroka. Dlodlo at no stage sought to interrogate the merits of the report, an issue the public protector appeared to have misunderstood.

The public protector had instead sought to challenge the minister to release the report, a bid that proved unsuccessful.

“The public protector concedes that at the time of compiling the public protector report she had not been furnished with the OIGI report but nonetheless had it ‘on good authority’ what those findings were,” Moroka told the virtual hearing.

Embracing this hearsay evidence, Mkhwebane then concluded that SARS had created a covert unit and instructed the Minister to “within 90 days… implement, in totality the OIGI report, dated 31 October 2014.”

Mkhwebane had also instructed the minister to, within 30 days, ensure “that all intelligence equipment utilised by SARS intelligence unit is returned, audited and placed in the custody of the State Security Agency”. And to top it all, Dlodlo had to make available “a declassified copy of the OIGI report”.

“It is submitted from the onset that the Public Protector’s remedial action against the Minister is incompetent in law, irrational, inappropriate, unlawful and in some respects ineffective for the simple reason that the erstwhile Inspector-General acted ultra vires in compiling the OIGI report,” said Moroka.

Radebe had been tasked by then Minister of State Security David Mahlobo to probe the infiltration of SARS by rogue SSA elements, but later illegally extended her mandate to include SARS.

“In addition, the Minister does not have powers to implement remedial action imposed by the Public Protector,” said Moroka.

No legislation anywhere allowed Dlodlo to “do what the public protector seeks her to do.”

Over and above this, the Radebe report had since been set aside on 8 June 2020 by Judge Sulet Potterill in the North Gauteng High Court.

On Thursday Moroka said that Dlodlo had, in that matter, agreed that Radebe’s report contained “indefensible deficiencies” and that the investigation had been conducted unlawfully.

“If the minister were to implement the OIGI Report, her decision would be reviewable because… she would be exceeding her statutory powers as set out in the intelligence legislative prescripts, in that that minister does not enjoy jurisdiction over law enforcement agencies, the SARS and its members.”

What the public protector ordered the minister to execute “would be tantamount to arbitrary usage of her executive powers”.

A copy of the Radebe report, Mkhwebane had later claimed, had mysteriously been left in the foyer of her offices, “yet she still maintained that she had not read it”.

Advocate Wim Trengove, for Gordhan, referring to the OIGI report and Mkhwebane’s reliance on it to reach her findings, said it was curious that in court papers Mkhwebane “pretends not to have seen the IGI report”.

“She is dishonest about it. She pretended not to have a copy of the report,” said Trengove.

In her own words, said Trengove, Mkhwebane said she had been “reliably informed” that the report was with the Minister of State Security and that the public protector had subpoenaed her to hand it over without success.

A copy of the Radebe report, Mkhwebane had later claimed, had mysteriously been left in the foyer of her offices, “yet she still maintained that she had not read it”.

Trengove said he was attempting to assess the role the Radebe report had played in Mkhwebane’s finding that Gordhan had established an illegal unit, but this had been impossible as Mkhwebane had not included it in her the Rule 53 record.

“This is consistent with the pretence that she did not have a copy,” he said.

Nevertheless, Mkhwebane ordered the Minister of State Security to implement the report “in totality” within 90 days, he said.

“What are we left with? A conclusion of disgraceful misconduct. She might have lied about whether she had the report or not but we suspect she had it.”

Trengove also argued on Thursday that the public protector had shown no special circumstances to entertain a complaint that was older than two years. She had “failed to identify any rational grounds, evaded the question and on occasion contradicted herself” in this regard, said Trengove.

If it were true that the public protector did not have a copy “then it is the most extraordinary abuse of power to order the minister to implement the report. She blindly orders this,” said Trengove.

It was, he added, an “egregious” abuse of power.

“The public protector has never explained why she parroted a report she had never seen of an investigation of which she had absolutely no knowledge,” Trengove set out.

Mkhwebane had relied also on the Sikhakhane report, which “has been widely repudiated” and the KPMG report, which had been withdrawn as well as the IGI report, said Trengove.

The Nugent Commission of Inquiry into SARS had found that there had been nothing in Sikhakhane’s report “to persuade the Commission” that the High Risk Investigative Unit had been unlawfully established.

Trengove also argued on Thursday that the public protector had shown no special circumstances to entertain a complaint that was older than two years. She had “failed to identify any rational grounds, evaded the question and on occasion contradicted herself” in this regard, said Trengove.

He said the public protector had argued that she was empowered to investigate “anything irrespective of when the incident arose” but this was “plainly wrong”.

Trengove spent most of the morning painstakingly setting out the original 2007 proposal to beef up the internal capacity of SARS to combat the illicit economy, politically exposed taxpayers and various other offences.

The entire mandate of the overhauled investigations capacity, he said, related to SARS and tax matters alone.

The idea had been to establish a unit with specialised skills within the enforcement division of SARS “in support of its strategic objectives of combating economic crime with a tax or customs dimension”.

The public protector had a “lengthy history” of acting “unconstitutionally, unfairly and unjustifiably”. Gordhan argued that an adverse costs order “would be one way for this court to join in those earlier efforts to correct her approach to her important work”.

The unit had been lawfully established and at the time, national legislation taken into account included The Customs and Excise Act, The Income Tax Act and the VAT Act.

With regard to costs in the matter, Gordhan, said Trengove, sought an order that the office of the public protector and Mkhwebane personally be ordered to pay costs jointly and severally.

“This is one of those circumstances where public officials, like the public protector, must be ordered to pay the cost out of her own pocket.”

The public protector should do so as she had demonstrated that she was “unfit for office” and continued “to ignore her constitutional mandate, act without regard to the provisions of the law and seemingly in service of some other motive or agenda”.

The public protector had a “lengthy history” of acting “unconstitutionally, unfairly and unjustifiably”. Gordhan argued that an adverse costs order “would be one way for this court to join in those earlier efforts to correct her approach to her important work”.

Counsel for the Public Protector, Thabani Masuku, began argument in the late afternoon, stating that the public protector contended that Gordhan, in seeking to review and set aside the report, “had mounted a bad-faith attack on her and the Office of the Public Protector”.

“The insults have been made to harass and demean the constitutional significance of the work of the public protector,” argued Masuku.