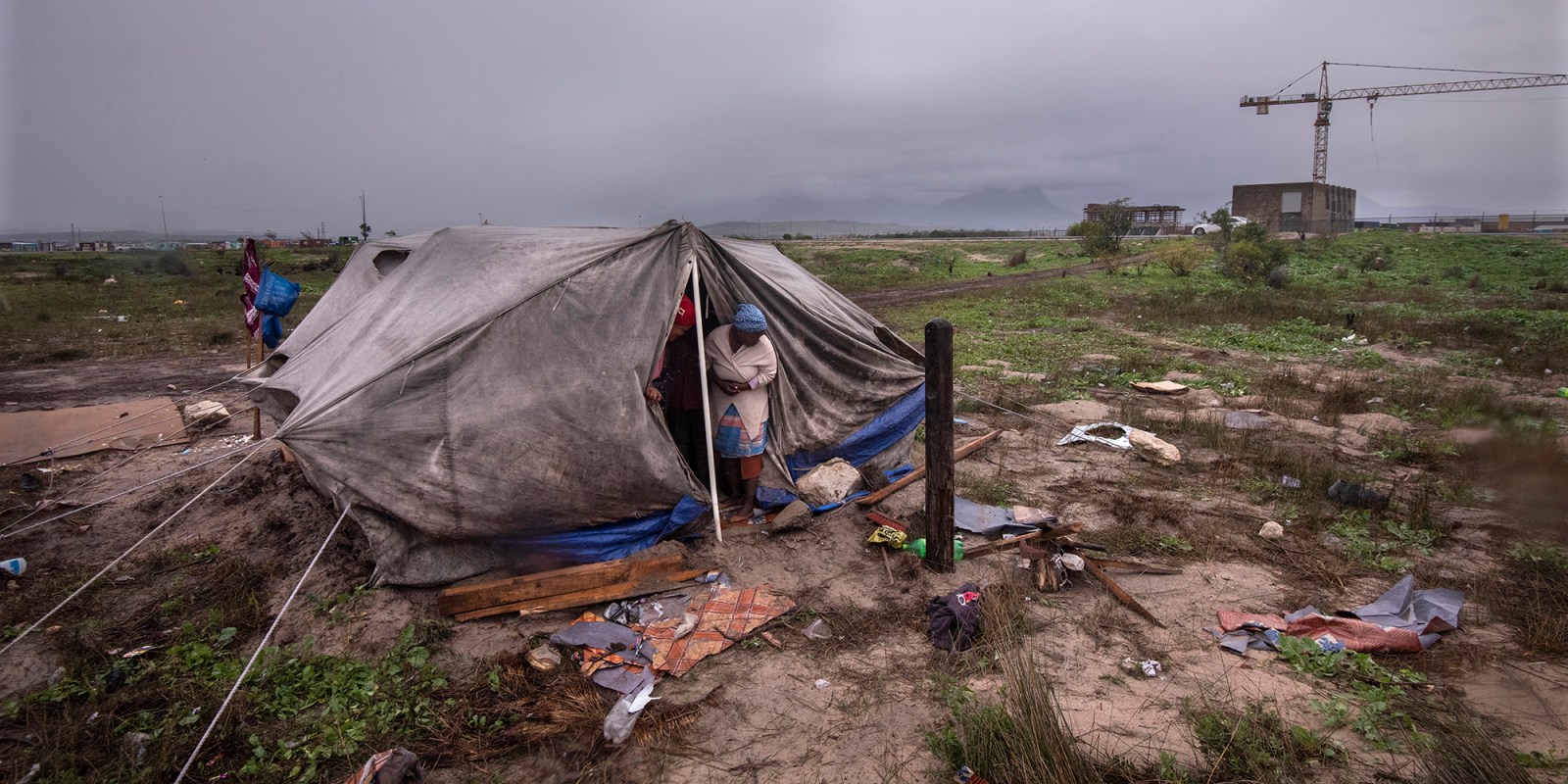 Nyameka Mantambo at the tent in eThembeni given to her by Gift of the Givers after her shack was demolished in Empolweni, Cape Town, South Africa. (Photo: Brenton Geach)

Nyameka Mantambo, a mother of five, was evicted after being unable to pay rent in Khayelitsha during the Covid-19 pandemic. She moved to Empolweni where, after shacks were destroyed and obtaining permission to rebuild, she was forced off the land after community members tried to extort R1,000 to ‘allow’ her to erect a shelter. The land belongs to the City of Cape Town.

For five years, Nyameka Mantambo and her five children were backyard dwellers in Town 2 in Khayelitsha. When the Covid-19 lockdown was enforced in late March, she was unable to pay her monthly R500 rent.

“I asked the landlord to allow me not to pay rent for two months, my landlord didn’t agree and I had to look for another place to stay,” Mantambo told Daily Maverick.

Mantambo is from the Eastern Cape, and moved to the Western Cape in 2000 in search of a job. She first  stayed in Lower Crossroads where she was a backyard dweller.

Mantambo sells chicken feet to support her children aged two, five, nine, 11 and 15. With the drastic decrease in her income, Mantambo relied on child grants to feed her family.

Despite the moratorium on evictions under lockdown regulations, landlords are still evicting tenants who can’t pay rent.

The housing crisis has led to mass disruptions, protests and exploitation of vulnerable communities. An estimated 600,000 people are on the housing waiting list in the Western Cape alone (See sidebar below).

After she was evicted, Mantambo built a shack at Empolweni, on City-owned land. In April, when shacks were demolished there, she and the other residents were left homeless.

Empolweni residents took the City of Cape Town to court over the demolitions. Judge Bryan Hack ruled in the residents’ favour and ordered the City to allow 130 people to return to Empolweni and to give back their building materials. Where material had been damaged, the City had to ensure that there was adequate material for all 49 homes to be rebuilt.

Because Mantambo didn’t have any building materials she and her children stayed in a tent donated by Gift of the Givers in Empolweni. But, she was constantly harassed for money to stay on the land, so she moved after a month. “I couldn’t do anything, that’s why I left [Empolweni],” said Mantambo. In May Mantambo and her five children moved to the adjacent area of eThembeni, which is also City-owned land.

In early July, the Anti-Land Invasion Unit dragged Bulelani Qolani out of his shack while he was naked in eThembeni.

While Mantambo witnessed the demolition of structures that day, she was spared because she was staying in a tent.

The tent was their home until a woman in eThembeni offered her a shack. “A community leader [in eThembeni] had a shack here that belonged to her brother. Now, I’ve bought the shack,” said Mantambo. The shack costs R2,500 and Mantambo is paying it off monthly.

After months of disruption and relocation, Mantambo is feeling more settled and safe in eThembeni. She says no one has asked her for any money; in fact, the opposite has happened, “The people here [in eThembeni] have helped me a lot, even when I don’t have enough for food or something, they help me,” said Mantambo.

Desperation and risk of extortion

Across the country, the need for housing far outweighs the supply of housing. In a Cape Talk interview a month ago, Tertius Simmers, the MEC for Human Settlements in the Western Cape, said there are almost 600,000 people on the housing waiting list.

Because people urgently need housing, occupying land is seen as one of the ways to immediately address their housing needs.

Although paying for a plot on occupied land is illegal it is common in many informal settlements, said Adi Kumar, the director of the Development Action Group, an NGO that advocates for affordable housing, land and tenure security.

“This isn’t a new phenomenon, but prevalent even in informal settlements that are over 20 years old,” said Kumar.

These are illegal transactions, said Malusi Booi, mayoral committee member for human settlements. There are some people who see the land occupations as a means to enrich themselves illegally, said Booi.

“There are many recourses that can be taken,” Kumar told Daily Maverick. “Firstly to report this to SAPS and law enforcement around the ‘main occupier’ and charging rent. Secondly, addressing this issue with the ward councillors, so that it can be recorded with city council.”

Land occupiers forcing other land occupiers to pay for occupied land falls under extortion. “Extortion takes place when someone else induces pressure on another person with the intention of getting some sort of benefit. The pressure can be anything, as long as that pressure can create a sense of fear in the mind of the person who’s being subjected to the extortion,” said Legal Aid lawyer, Kabelo Manyoga.

Extortion is rife in land occupations. Generally, everyone living in the informal settlements knows about it, said Manyoga.

However, not many people report it to the police “which is often because people aren’t informed about their rights”, Manyoga told Daily Maverick.

Another issue is that “even when people are urged to open a case, they are not willing to”, said Brenda Hansen, a DA ward councillor in Kraaifontein, where there have recently been land occupations.

“Besides opening criminal charges, the extorted person can go to the civil court and apply for an interdict for those people to stop harassing them and stop asking them for money because they don’t own that land,” said Manyoga.

To anonymously report illegal activity residents can call 112 from a cellphone which is toll free and 107 from a landline. DM