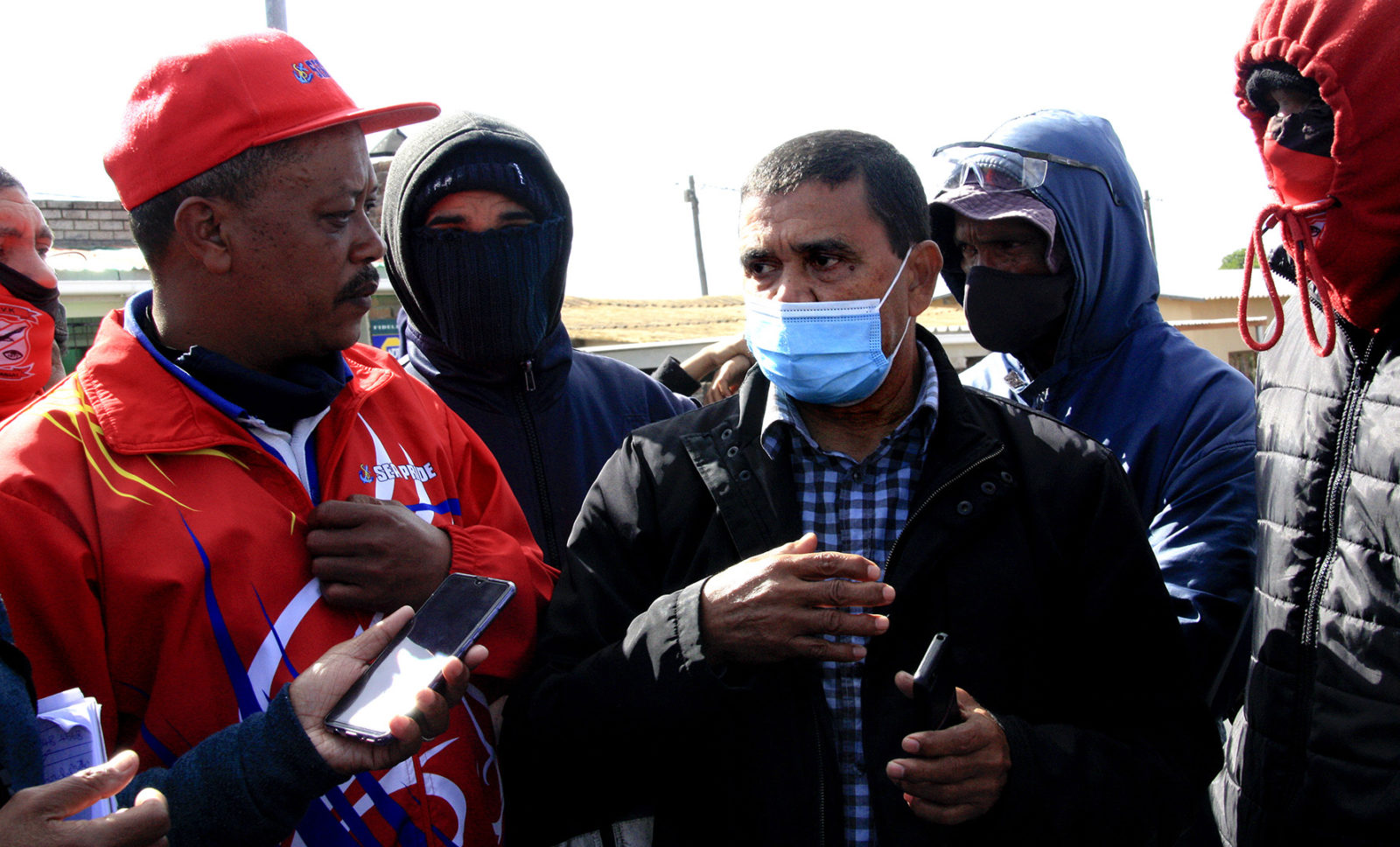 Laingvile roads re-opened on Wednesday after a meeting with Heinrich Mettler, the municipal manager of Saldanha Bay. (Photo: David Rossouw)

A meeting between West Coast role players has potentially ended a six-day service delivery protest that led to a nine-year-old boy being shot in the head.

Roads in Laingville were reopened on Wednesday night after a meeting between Heinrich Mettler, municipal manager of Saldanha Bay Municipality, and community leaders from Laingville, Steenberg Cove and Stompneusbaai.

This potentially brings an end to a six-day service delivery protest which resulted in the wounding of nine-year-old Leo Williams in Laingville on Friday 31 July. The Grade 2 learner was wounded in the head, with residents claiming that the police shot him, but the SAPS denying it.

A bullet lodged in the child’s brain is a crucial piece of evidence that will determine who fired the shot and who will be criminally charged. His condition remains critical but stable, at the Red Cross Children’s Hospital in Cape Town.

His legal guardian, Cathy Thomas, said doctors hope the swelling in the boy’s brain will subside and will make a decision on Friday 7 August whether it is safe to remove the bullet.

Laingville community leader Thyrone Williams confirmed that following the meeting the roads leading to the area were immediately reopened.

This came after some of the demands of the community were met. The only impediment is the housing waiting list, which needs to be addressed. The list in its present form reflects 30% of the coloured community while they represent 60% of the population in Laingville.

“We are happy with the outcome of the meeting. It was agreed the Saldanha Bay Municipality would provide residents with fully serviced plots and an approved plan. Residents must build their houses within three years. But they are not allowed to rent or sell the plot or erect informal structures. Because of this agreement our community has terminated protest actions,” Williams said.

However, the same cannot be said about the situation in Steenberg Cove and Stompneusbaai, where the land belongs to private owners. The Saldanha Municipality will engage with the private owners about selling land to be rezoned for housing purposes.

Preventing illegal land grabs and site invasions for the past 15 months has cost the Western Cape Department of Human Settlements R187-million. In addition, this past month alone, the department forked out R18-million to prevent illegal occupation of housing units and vacant land earmarked for human settlement.

Maverick Citizen has learned reliably that land in Steenberg Cove and Stompneus Bay was originally sold to fishing companies to provide housing to the fishing community. But the land was eventually sold to private developers.

Saldanha Bay’s Mettler echoed that the meeting was very positive and the ball is now in the court of community leaders to report back to residents. He emphasised it is imperative that roads be opened, adding further closures could be to the detriment of those with illnesses and needing medication.

“We agreed to engage regularly with the community leaders to ventilate issues that needed to be ironed out. It is important that the protest action stops so that members of the Public Order Policing unit can withdraw from Laingville, Steenberg Cove and Stompneus Bay,” Mettler said.

Nissen indicated the SAHRC will be part and parcel of engagements with the Saldanha Bay Municipality. It is for this reason that Nissen has dispatched a team to keep a watchful eye over the proceedings.

“All decisions made and the way forward will form part of a Memorandum of Understanding between the municipality and the role players. The SAHRC will make sure that this MOU will be carried out to the letter,” Nissen said.

He added that a case had been opened at St Helena Bay SAPS, which is being investigated by the Independent Police Inspectorate Directorate (IPID).

The Legal Resources Centre (LRC) has indicated it hasn’t been approached by the legal guardian of the child, but expressed its willingness to do so once approached. The LRC will take instructions and determine the best course of action, said Sherylle Dass, regional director of the centre

“The SAHRC has been actively monitoring the use of force in various hotspots around the country. The LRC works closely with them around police brutality and the use of force,” she added.

Preventing illegal land grabs and site invasions for the past 15 months has cost the Western Cape Department of Human Settlements R187-million. In addition, this past month alone, the department forked out R18-million to prevent illegal occupation of housing units and vacant land earmarked for human settlement.

On Thursday 6 August, the provincial Cabinet will discuss a proposal that seeks to address the current situation wreaking havoc in parts of the province. DM/MC