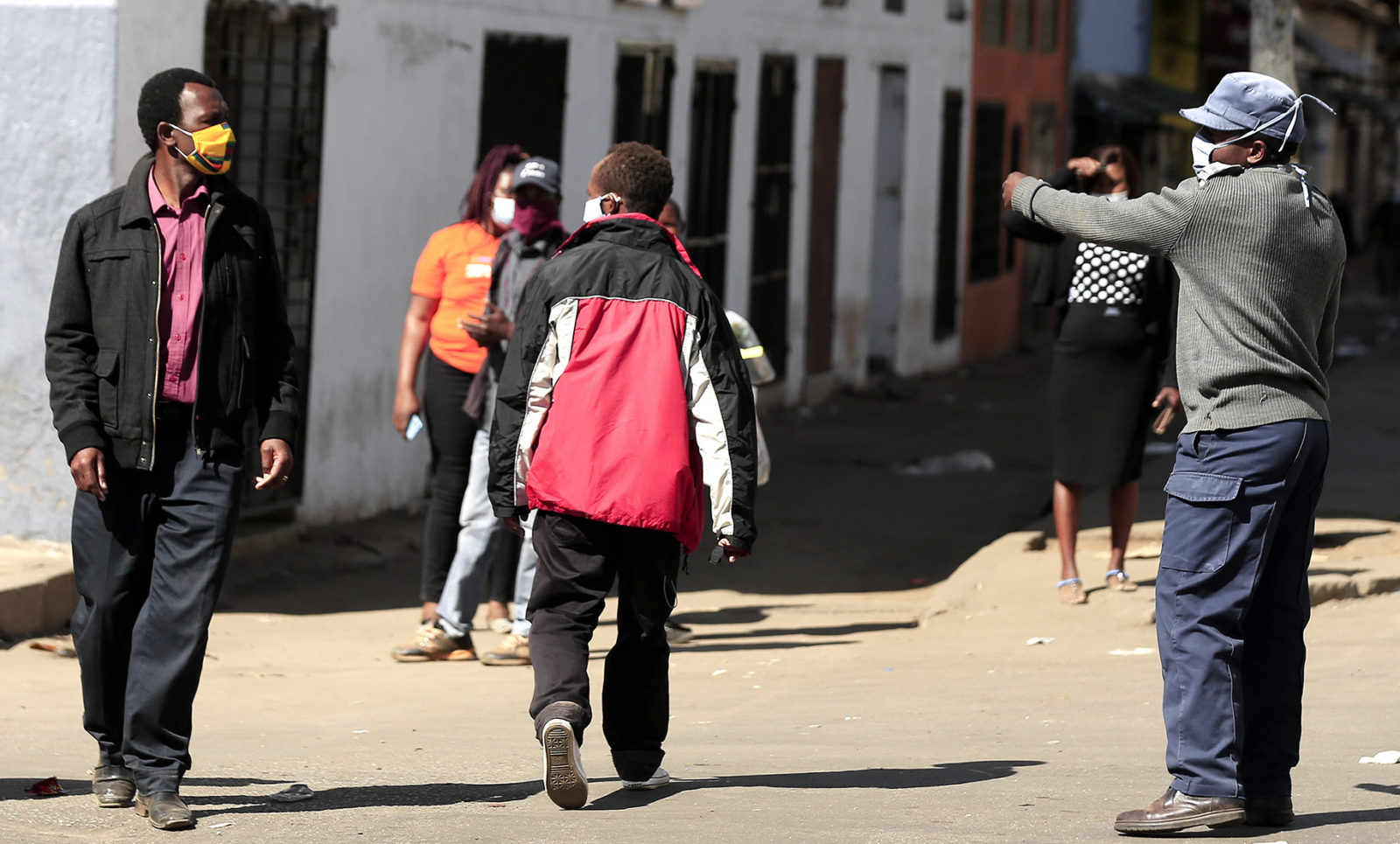 Zimbabweans are in agreement that #ZanuPFMustGo. But we have tried every legal avenue available to change leaders without success. We are faced with a leadership that has no respect for human rights and human life. A leadership that has killed with impunity for four decades.

There is a people’s movement on social media — #ZanuPFMustGo, that has been calling for an uprising to remove Zanu-PF from power for state capture and state failure. Zanu-PF has succeeded in capturing all institutions that are meant to uphold democracy.

Not only has Zanu-PF captured the state, it is incapable of running it. It has no capacity, no desire and no agenda to deliver that which governments are mandated to deliver. It has failed to effectively and efficiently allocate resources. Ours is a very small (population) resource-rich country that would be thriving were it better managed. Zanu-PF has failed to provide public goods and to facilitate the provision of merit goods. Under its watch, the economy has collapsed, the state has collapsed.

It is one thing to capture a state and run it efficiently, and another to capture the state only to run it to the ground, and then unleash armed forces on anyone who complains.

On Thursday last week, Zimbabwe Republic Police abducted a 22-year-old journalism student called Tawanda Muchehiwa. He was arrested with two of his cousins, Advent and Amandlenkosi Mathuthu, but bundled away into a separate car.

Later that same day, police raided the home of Tawanda’s uncle Mduduzi Mathuthu, a journalist and Editor of ZimLive newspaper, which has been exposing corruption-linked scandal after scandal by the Zimbabwean government. They claimed to be searching for “subversive materials”. They abducted Mduduzi’s sister Nomagugu Mathuthu and vowed to hold her illegally until her brother gave himself up.

After reports of the raid and abductions, the family’s lawyer Nqobani Sithole went to Bulawayo central police station to look for them. The police denied arresting them. Sithole persisted and asked the police to explain why the young men’s cars were parked at the police station, but the police continued to profess ignorance. Hours later, when police realised Sithole was unrelenting, they produced Advent and Amandlenkosi Mathuthu, but not Tawanda Muchehiwa.

They claimed Tawanda had escaped. The two cousins refuted that story and explained that Tawanda had been arrested with them, but they had no idea where he had been taken.

Zimbabweans were outraged. Why would the judge give his abductors three more days with him? Later that night, Tawanda’s abductors dumped him 3km from his home, severely tortured. He was taken to the hospital where he suffered renal failure, indicative of more harm having been done to him internally, possibly through poisoning.

A few months ago, Zimbabwe’s government abducted three women from the opposition Movement for Democratic Change (MDC) and tortured them for days before dumping them. In 2019, they abducted Peter Magombeyi, a doctors’ union leader, for leading a doctors’ strike for better salaries and hospital equipment. They kept him for days and dumped him after torturing him.

Over the weekend they arrested hundreds of unarmed civilians for peacefully protesting against them in the 31 July protests. These arrestees included MDC spokesperson Fadzai Mahere and one of this year’s Booker prize nominees, acclaimed writer Tsitsi Dangarembwa. All the protesters they arrested were peaceful, observed social distancing and other Covid-19 regulations and above all, were unarmed.

As we speak Hopewell Chin’ono, an award-winning filmmaker and journalist, has been remanded in prison for more than a week after exposing a multimillion-dollar corruption scheme involving Covid-19 funds. Also languishing in prison is an opposition leader who called for the 31 July protests, Jacob Ngarivhume.

We have been here before.

In 1980 Zanu-PF won the general elections, but lost all the seats in Matebeleland to ZAPU.

Instead of celebrating their victory, Zanu-PF focused all its energies on punishing those who had voted against them. A specially trained brigade of the Zimbabwe national army, called the 5th Brigade, was deployed to Matabeleland, the ZAPU stronghold, to deal with what the government called a “dissident insurgency”. They code-named the operation “Gukurahundi”, Shona for the rains that sweep away the chaff.

Gukurahundi killed more than 20,000 unarmed civilians in Matebeleland and led t0 the disappearance, rape, maiming and torture of many others.

After realising that Zanu-PF was not about to stop killing people, ZAPU president Joshua Nkomo submitted to Robert Mugabe and signed the unity accord in 1987 which saw Zanu-PF and ZAPU merging into a new party called Zanu-PF. The 5th Brigade was withdrawn and the killings stopped immediately.

In 1988, Edgar Tekere was fired from Zanu-PF for his constant criticism of corruption. He went on to form a party called the Zimbabwe Unity Movement (ZUM) and Tekere opposed Mugabe in the 1990 elections. Mugabe won the elections amid allegations of serious vote rigging as support for Tekere was resounding. Zanu-PF murdered at least five ZUM members and shot Patrick Kombayi, the ZUM organising secretary. The two men who shot Kombayi were found guilty, but pardoned by Mugabe shortly afterwards.

The new millennium brought with it a newly formed party, Movement for Democratic Change (MDC). Zanu-PF immediately went on the offensive and unleashed violence on MDC supporters. The 2000 parliamentary elections were fraught with violence which continued until the 2002 presidential elections. Zanu-PF won the election again amid reports of vote-rigging, vote-buying, voter intimidation and violence.

In 2008, the MDC’s Morgan Tsvangirai won the presidential election against Mugabe. A runoff was declared because Mugabe’s government claimed Tsvangirai had won by 47% instead of the required 50% plus one. The MDC disputed this result — to no avail — as they believed they had won outright.

Prior to the runoff, Zanu-PF unleashed the army as well as Zanu-PF youth militia groups that went on a spree to terrorise and kill MDC supporters in an operation called “wavotera papi?” Shona for “who did you vote for?” Several civilians had to flee their homes, many were abducted and disappeared and others tortured. Due to the violence, Tsvangirai pulled out of the runoff, leading to an uncontested victory by Robert Mugabe. MDC factions, however, agreed to reconcile giving the MDC a majority in parliament. This forced the negotiations for a Government of National Unity.

A one-party state by definition is undemocratic. It means the people cannot choose the leaders they want. Democratic societies allow for competition between political parties so that when it comes to who leads the country, the will of the people must prevail. Zanu-PF unfortunately does not believe in democracy and they do not believe they have to compete with anyone else for votes. They feel entitled to power and therefore instead of embarking on efforts to win hearts, they have made it their modus operandi to squash any threat to the one-party state.

In 1980, the threat to this one-party state was ZAPU — and Zanu-PF killed ZAPU supporters until their leaders submitted. To justify the killings, they called them dissidents.

In 1990, the threat to this ideology of a one-party state was ZUM and Zanu-PF killed key ZUM members and the party sank into oblivion. To justify the killings, they called them sellouts.

In 2018, the threat to the one-party state was Nelson Chamisa and the MDC Alliance and Zanu-PF killed unarmed protesters on 1 August 2018, and again in January 2019. To justify the killings, they called them violent looters.

In 2000, the threat to this one-party state ideology was MDC — and Zanu-PF killed MDC members until their leaders submitted. To justify the killings, they called them western-sponsored puppets.

The year is 2020, and a new threat to the one-party state has emerged. This time the threat is not structured, it is neither a single political party nor an organisation that Zanu-PF can mark. The threat is the People Power. The people of Zimbabwe have decided to speak out against Zanu-PF misgovernance and repression and this has Zanu-PF in a frenzy.

The president issued a statement saying they would flush out all terrorists. To justify the ongoing violence, they have declared us terrorists.

They control the Zimbabwe Electoral Commission, whose job is to uphold democracy through free and fair elections, but now seems to only be in place to facilitate a one-party state.

Zanu-PF controls the judiciary, whose job is to deliver accountability, but has only succeeded in ensuring impunity for perpetrators of economic, political and social crimes.

The police and army are unfortunately also firmly in Zanu-PF’s grip. Instead of focusing on peace, law and order and enforcing the rule of law, our armed forces have been turned into personal bodyguards of criminal leaders as well as the enforcers and deliverers of state brutality.

Zanu-PF controls the RBZ currency and uses the reserve bank as its own piggy bank. They have managed to conflate state and party expenditure to the point where taxpayers find themselves having to absorb Zanu-PF debts.

Zimbabweans are in agreement that #ZanuPFMustGo. But we have tried every legal avenue available to change leaders without success. We are faced with a leadership that has no respect for human rights and human life. A leadership that has killed with impunity for four decades.

Today the hashtag #ZimbabweanLivesMatter was trending on Twitter. Does this mean, dear world, you have finally taken note of our plight? DM/MC

Thandekile Moyo is a writer and human rights defender from Zimbabwe. For the past four years, she has been using print, digital and social media (Twitter: @mamoxn) to expose human rights abuses, bad governance and corruption. Moyo holds an Honours degree in Geography and Environmental Studies from the Midlands State University in Zimbabwe.