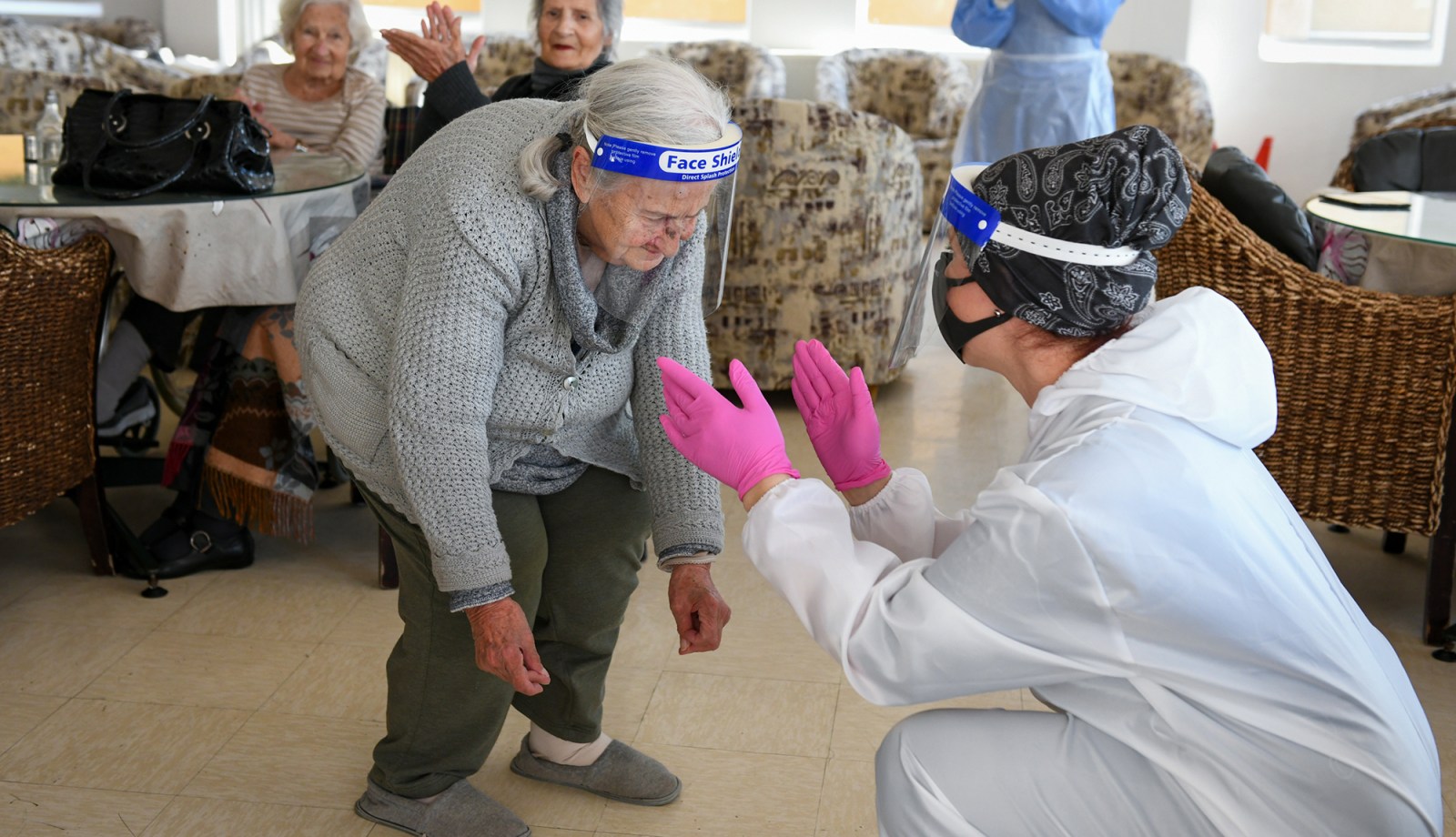 Encouraged by staff and residents, 93-year-old Alexandra Kerpinis performs some impressive knee bends as she dances to the traditional rhythm of a bouzouki played on a cellphone. The Nomikeios Greek Old Age Home is one of many old age facilities in Johannesburg that have experienced the sudden impact of Covid-19. (Photo: Chris Collingridge)

As Covid-19 rips through countries, cities and villages, it's been in homes for the aged that its impact has been most felt. But it’s not just the virus that threatens – loneliness stalks, too.

At the Nomikeios Greek Old Age Home, the residents stand up one by one and begin to dance to a traditional Greek song played over a cellphone.

With the encouragement of the staff, some of the residents form a half-circle, raise their hands above their heads – as Greeks do – and sway slowly and stiffly, to the rhythm of a bouzouki.

The dance might as well have been a celebration, an act of joy to mark the end of a time of death, and the welcomed slow return to normality.

For two weeks, the Covid-19 virus had swept through the Greek old age home that sits off a quiet street in Orange Grove, Johannesburg.

By the time the virus was finished with the home in early July, nine residents had died.

Four died in the home and five in hospital. But it was also a time of miracles.

A 97-year-old woman who had just recently survived breast cancer fought off the virus and survived.

So did 90-year-old Helene Yannakou.

“I was just a little sick, thank God,” she says.

Tears well in Daniela Chrysostomou’s eyes when she thinks of that time.

“We did everything… we had put measures in place,” says the chairwoman of the Greek Ladies Benevolent Society, that runs the home.

Her staff had gone to great lengths to protect the residents.

When lockdown was first declared in late March, some staff opted to move into the facility.

There they stayed, caring for the elderly 24/7, cut off from the outside world, dressed in stuffy PPE and ever mindful of the disease that was soon sweeping through the suburb that lay beyond the gates of the old age home.

“Then on June 16, that was when the trouble started,” recalls Chrysostomou.

By then the lockdown had eased and some of the staff had gone home, later coming back to work.

One is suspected to have returned with the virus.

Covid-19 has spread like wildfire through old age facilities in the city.

Daily Maverick understands that over 100 old age homes in Johannesburg have, in the last month and a half, experienced massive outbreaks.

In these homes are people who are statistically the most likely to die from the disease. Healthcare professionals working with old age homes have seen the same scenario over and over.

It begins with a staff worker introducing the infection into the old age home. Those who run the facility realise there has been an outbreak, and intensive testing programmes are initiated.

Soon they discover that large numbers of residents are infected.

As the disease has spread among these homes, so have the calls for help.

Facebook is filled with pleas from old age homes looking for PPE or donations as they fight the pandemic on limited budgets.

The staff at the Greek home realised that Covid-19 had slipped into their facility when one of the residents was sent to hospital for X-rays after a fall. A routine test picked up the virus.

Testing of staff and residents revealed that the virus was spreading rapidly.

It was then that the Johannesburg Greek community rallied.

Doctors from within the community began caring for the patients from the home. Money came pouring in.

“The residents were so scared,” recalls  Chrysostomou.

Patients had to be isolated, which meant family and friends weren’t allowed to visit. It was a hard time. An effort had to be made to keep the residents occupied.

It is this isolation, believes Liana Grobler, national president of the South African Association of Homes for the Aged, that is going to be the biggest threat to the elderly during the pandemic.

“That is what is killing them; the loneliness and boredom. You can take a picture now of someone, and two weeks later you can actually see the deterioration… it is really not good for them,” says Grobler.

“We have been promoting the Skypes, the video calls, that sort of thing. The problem is that you speak for five, ten minutes, maybe half an hour, then what do I do for the other 23 hours?”

Priscilla Chauke, the matron at the Itlhokomeleng Old Age Home in Highlands North, Johannesburg, has also seen the effect the lockdown has had on the elderly.

Many of the residents at the home suffer from dementia and can’t understand why their families aren’t allowed to visit them.

Chauke said that so far they have had two confirmed cases of Covid-19. In both instances, the patients recovered.

“We can see some signs of psychological distress with some of them, but fortunately we do have social workers who can help,” says Chauke.

“We have one dementia patient who keeps on asking ‘when is my daughter coming’ and he becomes angry.”

The Itlhokomeleng Old Age Home, which is subsidised by the state, doesn’t have WiFi, although Chauke says that they are looking at ways to allow their residents to access the internet so they can communicate with their families. Currently, they allow residents to talk to visitors at the gate, while maintaining physical distancing, after they have been screened.

Old age homes are no strangers to pandemics – they hit frequently, home in on the most vulnerable of society, and seldom do they make the news.

About six years ago, a virulent strain of influenza struck the Greek old age home.

In a month and a half, it had killed 12 residents. The same killer flu hit other old age homes across the country. The rule of thumb, according to Grobler, is that they experience such an event every 10 years or so.

As with Covid-19, any epidemic draws heavily on scarce resources, and even eats into future budgets. PPE must be bought and more money spent on staff and medicines.

“It is going to be back to basics. We are not going to be able to afford nice things in places any more. We are just going to have to survive,” explains Grobler, of what she thinks a post-coronavirus world is going to look like for the 400-odd old age homes represented by her organisation.

“To give an example, in old age homes you have a medication trolley that is used in a frail care environment. For 10 years (after the last epidemic), we had managed with the bare basics… an ordinary trolley. Then for the last two years, people have been able to afford that very nice trolley.”

By around 4 July, staff and doctors at the Greek old age home felt they had defeated the virus. There were no more cases.

But the virus has left deep scars on staff and those residents who survived.

“You knew their life stories, and you knew their hopes,” says the home’s supervisor Ioana Tatu, of those who died from Covid-19.

“They become our grannies and our loved ones,” adds staffer Zama Nene, who, along with some of the residents, is dancing to that traditional Greek song.

In recent days, family members have been allowed into the old age home to visit. A room has been set up with strict protocols in place. There is physical distancing, and after the visit, the room is fogged with disinfectant.

The family reunions are emotional, and Tatu makes sure there is a box of tissues within easy reach. There are often a lot of tears – some of joy and some of sadness, too. DM