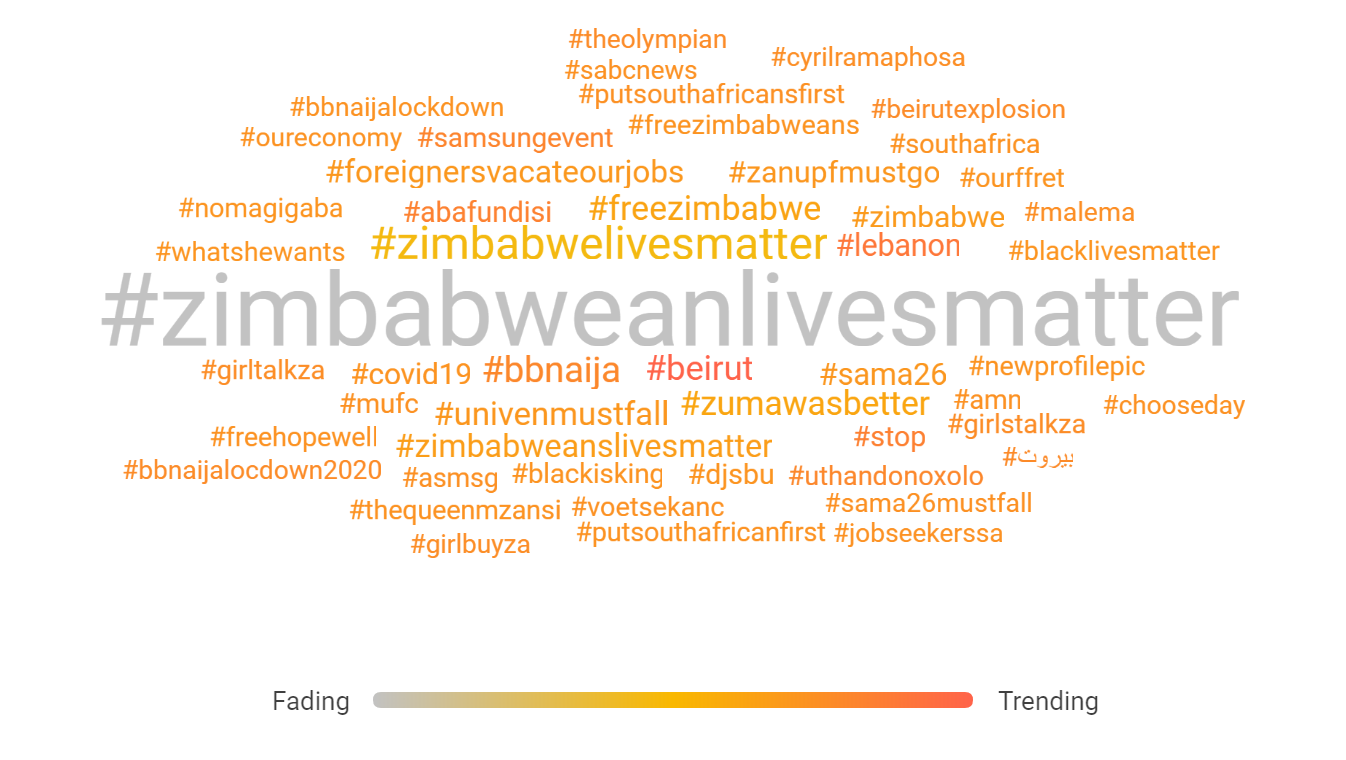 This is a summary of the trending, highest impact, and most active themes and their narratives related to social cohesion and division in South African public-domain social media conversations on 4 August 2020.

The uproar over events in Zimbabwe continued to drive high volume conversation on South African social media. Twitter users took their campaign to the world stage by involving international celebrities. 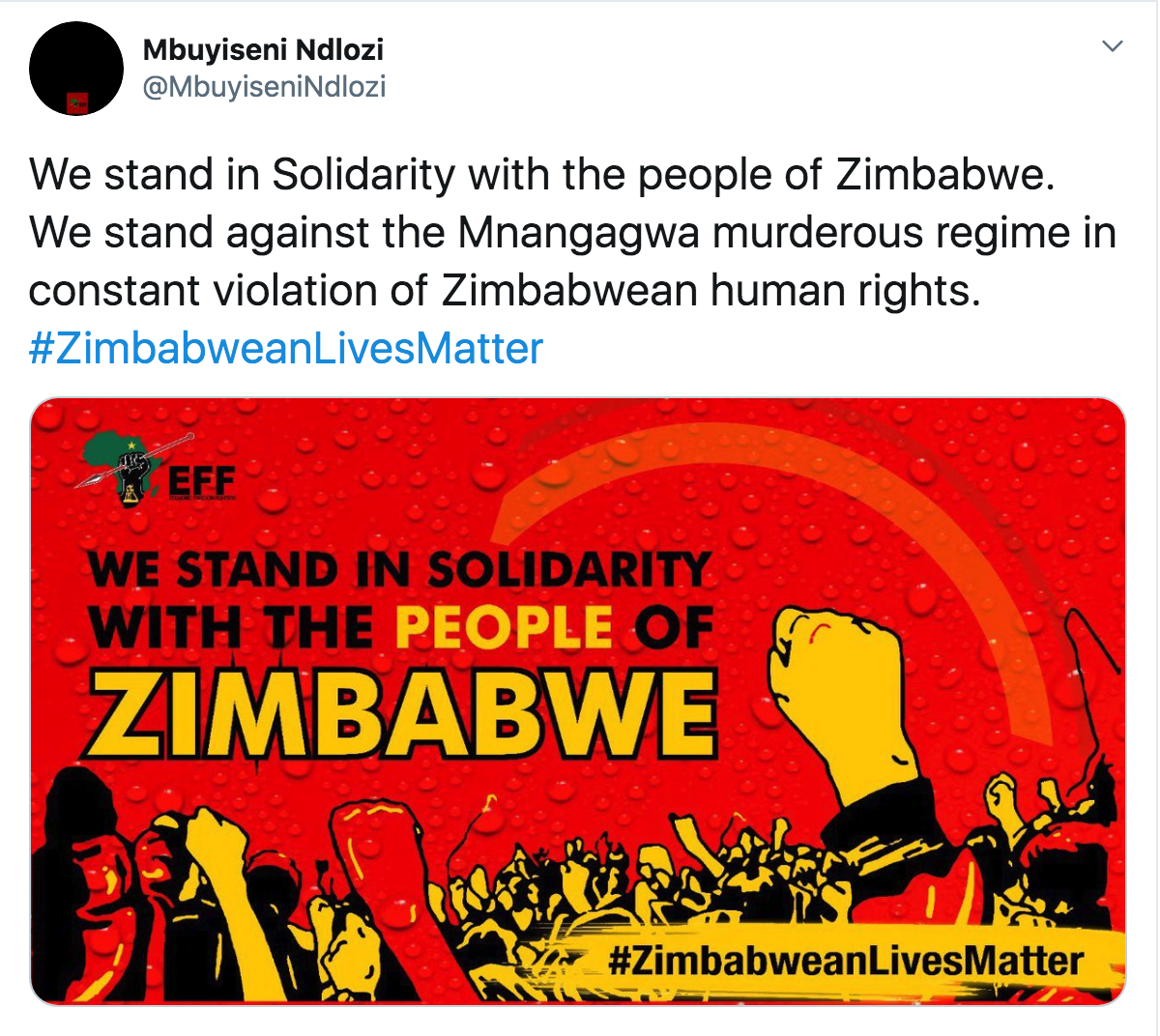 @Zoe_Flood explained to Twitter users why #ZimbabweanLivesMatter was trending around the world, citing the arrests of protesters and journalists.

Zimbabwean President Emmerson Mnangagwa posted: “This morning I updated the people of Zimbabwe on the situation in our country. Despite the hurdles we face – cyclones, droughts, sanctions & now the Coronavirus – our goal remains constant: To reform, restructure & rebuild in order to improve the lives of our people.”  (900 retweets and 1,600 likes.)

Twitter users were quick to join the conversation. Mmusi Maimane commented: “Hai man. This thing is simple, you must release investigative journalists like Hopewell Chin’ono, you must respect the rights of citizens to free speech and the rights of activists to organise around their causes.” (3,600 likes.)

As awareness around the #ZimbabweanLivesMatter campaign grew, Twitter users became more critical of leadership in Zimbabwe and other African countries. @Ugaman01 tweeted a video of armed soldiers who appear to be kicking a man lying on the floor.

As the video comes to an end, the Zimbabwean flag is shown along with the words, “We Can’t Breathe,” echoing a chant that became popularised during the Black Lives Matter protests in the USA. The video has been viewed close to 19,000 times and has received more than 1,100 likes.

At 16:43 @ElsaAngel19 tweeted: “I don’t understand why African leaders feel the need to gain extreme power and money at anyone’s and everyone’s expense. Like you’d rather buy your fifth Mercedes than let people eat?”  The post received more than 5,400 likes. 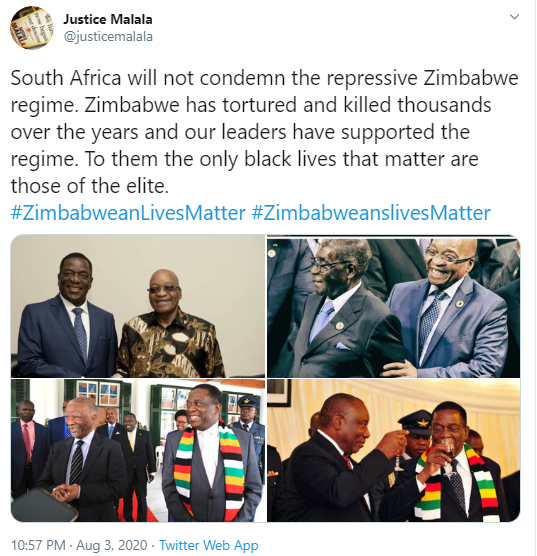 @justicemalala tweeted images of Jacob Zuma, Thabo Mbeki and Cyril Ramaphosa pictured with Emmerson Mnangagwa: “South Africa will not condemn the repressive Zimbabwe regime. Zimbabwe has tortured and killed thousands over the years and our leaders have supported the regime.  To them the only black lives that matter are those of the elite.”  His post has been retweeted more than 1,000 times.

A diverse group of South African politicians, artists and academics took to Twitter to show their solidarity with Zimbabwean citizens.

EFF commissar Mbuyiseni Ndlozi shared a post about the unjust and violent political regime: “We stand in Solidarity with the people of Zimbabwe. We stand against the Mnangagwa murderous regime in constant violation of Zimbabwean human rights. #ZimbabweanLivesMatter.”  His tweet received 4,000 likes and 1,500 retweets.

The UCT Student Representative Council tweeted: “The SRC stands with the people of Zimbabwe. #ZimbabweanLivesMatter,” receiving 3,200 likes and 1,600 retweets.

International Zimbabwean artist Tinashe shared, “Praying for my family and all of ZIMBABWE.”  This tweet received over 46,100 likes and 11,100 retweets, while South African music K.O commented that although the South African Music Awards were underway, more support and awareness needed to be given to Zimbabwe and the current unrest being faced by citizens: “Celebrating our #SAMA26 win BUT the biggest conversation is #ZimbabweanLivesMatter right now! Human Rights violation against our fellow African brothers and sisters is a crime against humanity. Period! 🇿🇼 We love you dearly and you’re in our prayers 🙏🏾❤️,” received 4,600 likes and 1,700 retweets.

Following a recent trend, Mmusi Maimaine (@MmusiMaimane) tagged international actress Lupita Nyongo: “Hi @Lupita_Nyongo can you help us bring global attention to the human rights abuses in Africa. The attacks on black lives which need urgent global solidarity. A burning topic right now is the arrests of journalists and activists in Zimbabwe. #ZimbabweanLivesMatter.”  The tweet received over 8,600 likes and 3,700 retweets.

Flint Bedrock shared a tweet with a video showing soldiers violently hitting civilians. The video read: “We are sick and tired of being abused by a ruthless regime that has nothing but contempt for the people of Zimbabwe. People are dying needlessly, generations have had their futures stolen from them, enough is enough. #ZimbabweanLivesMatter” and received over 138,600 views, 3,500 likes and 3,000 retweets. 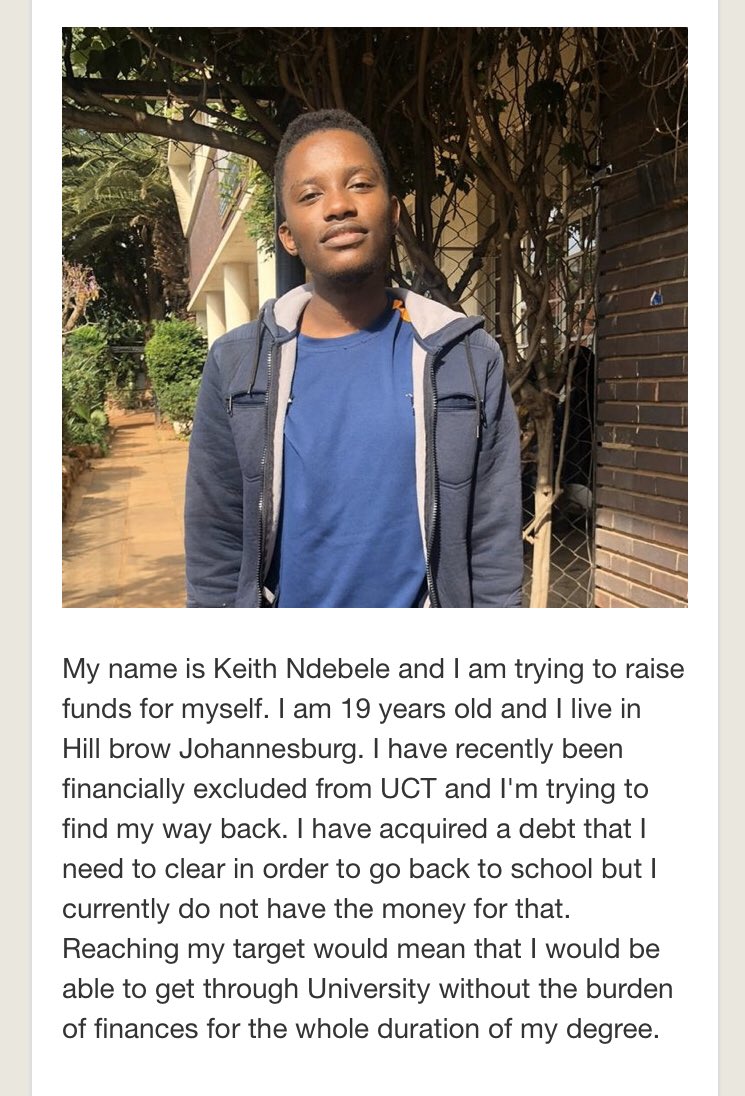 “NSFAS applications for 2021 are now OPEN… Kindly RETWEET for awareness!” tweeted @robzinterris, announcing that the tertiary funding scheme was open for applications. The tweet received over 4,800 retweets and 4,400 likes.

Meanwhile, @CeeAmonye shared her friend’s university crowdfunding initiative which he started after being financially excluded from UCT: “Hey guys. My friend Keith needs help raising funds for uni. He is extremely hardworking and despite this setback, he has managed to stay positive and focused . He deserves to complete his degree and with your generous donations, I believe he will. Nothing is too small. 👇🏼👇🏼👇🏼,” and received over 2,400 retweets and 940 likes.

@_LadyRea tweeted that Dischem will be doing pap smears and breast exams for R180 during August to mark Women’s Month. Her tweet was well received with more than 7,500 retweets and nearly 6,000 likes.

@HulisaniRavele tweeted that corporates should spare female employees the Women’s Day brunches and soirées and rather use the money to bump their salaries up so that they are in line with that of their male counterparts. This post has been retweeted more than 2,300 times and received close to 5,500 likes.

The official Kaizer Chiefs Twitter account (@KaizerChiefs) tweeted an update at 16:02 saying they had decided to suspend manager Bobby Motaung. The post was retweeted more than 2,000 times and received over 3,000 likes by this morning.

@SuperSportBlitz tweeted details of the decision taken by Kaizer Chiefs: “The suspension comes as a result of videos circulating on social media wherein Motaung is seen “taking part in festivities during what looks like the lockdown period.” DM