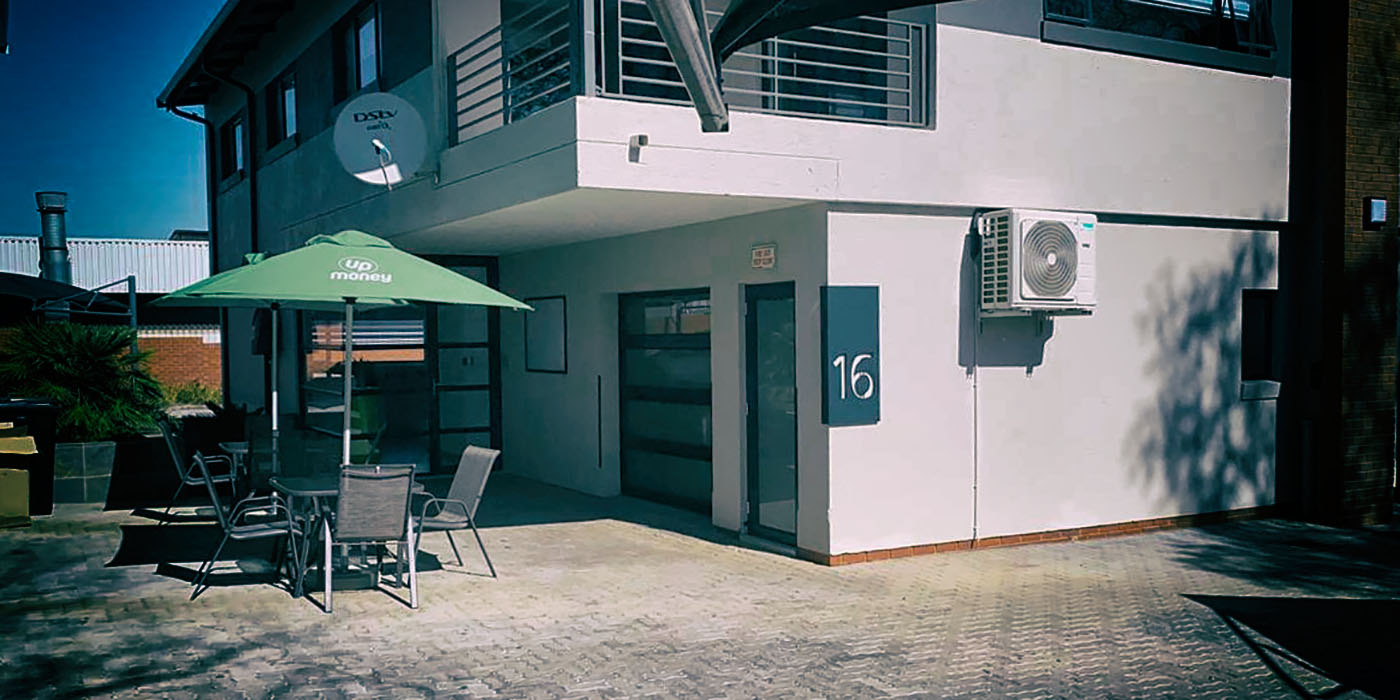 The Up Money offices in Midrand. A criminal case has been opened against the pyramid scheme registered in 2017. (Photo supplied)

The Asset Forfeiture Unit (AFU) announced on Tuesday that it had, based on evidence from the National Consumer Commission and Financial Intelligence Centre, frozen the accounts and was investigating a Covid-19 pyramid scheme called Up Money grocery club owned by Jude Matsimela and Sipho Mdhuli.

Up Money grocery club, a self-proclaimed stokvel with more than 230,000 members, has been flagged as a pyramid scheme by the National Consumer Commission (NCC).

Speaking at a press briefing on Tuesday, the deputy national director of public prosecutions and head of the Asset Forfeiture Unit (AFU) in the NPA, Ouma Rabaji, said two bank accounts were frozen, one in the company’s name with more than R18-million and another under Uniitco (Pty) Ltd with close to R206,000. Money was moved between the two accounts.

Three luxury vehicles were also seized. “An Audi TT, a Hummer H3 and a Jaguar XKR Coupé, which were purchased directly from the Uniitco (Pty) Ltd bank account,” said Rabaji.

The accounts were frozen after the South Gauteng High Court granted preservation orders to the AFU.

After a preliminary investigation, the company was found by the national director of public prosecutions (NDPP) to be in contravention of regulations in the Prevention of Organised Crime Act, the Consumer Protection Act and the Companies Act, among others.

Up Money is believed to have committed up to nine offences, including racketeering, money laundering, fraud and theft.

The scheme received close to R43-million between 4 May and 2 July, and more than R12.5-million was spent on purchases at various retail stores and buying the three luxury cars.

A criminal case has been opened and investigations are in their final stages. Arrests are yet to be made.

“The minimum [sentence] for corruption and racketeering is about 15 years,” said NPA spokesperson Sipho Ngwema.

The company is not registered with the Reserve Bank, is not a registered stokvel, and is not a financial services provider, said Rabaji.

How Up Money works

According to the National Prosecuting Authority, the pyramid scheme mainly used social media to recruit members.

“New participants were required to pay a once-off joining fee of R180. This qualified them for a meat pack. The new members were then required to recruit five other new participants; this process was termed Level 1,” the NPA wrote in a statement.

Shown on the website, the products are enticing. The meat pack contains close to 12kg of meat while the grocery pack has fresh and perishable food items like 2 litres of cooking oil, 5kg of maize meal, rice, onions and potatoes. The third product is a baby pack with nappies, wipes and baby formula.

A quick search on the CIPC database shows the company was registered in December 2017 under directors Jude Ignatius Matsimela (the CEO) and Sipho Martin Mdhuli.

Based in Midrand, Johannesburg, the company claimed it was helping people uplift their communities, by giving them the means to tackle food insecurity, transport access, electricity costs, and pay for school fees.

What is a pyramid scheme?

“What we’ve realised about South Africans is that most people understand what pyramid schemes are,” said the acting commissioner of the NCC, Thezi Mabuza, explaining that most people don’t report these crimes as they know they are dabbling in illegal activity.

Pyramid Schemes are prohibited under Section 43 (2) of the Consumer Protection Act (CPA).

A few telltale signs of a pyramid scheme are:

Funds are funnelled from low-level investors (the base of the pyramid) to the top-level members who pocket most of the cash while those at the bottom walk away with nothing.

Ngwema said authorities were alerted to the company’s dodgy dealings around May 2020 by a whistle-blower from Eastern Cape.

Joseph Selolo, the acting company secretary of the NCC, said six other pyramid schemes are currently under investigation. He did not disclose their names.

“Where there are victims, the money is eventually returned to the victims or where there are no victims, we then deposit the money into what we call a Criminal Asset Recovery account,” said Rabaji. She made a distinction between victims who were swindled by the scheme and participants who knowingly took part in illegal activity.

Genuine victims can claim from the Criminal Asset Recovery Account, she explained, but the investigation found that most contributors to Up Money participated knowingly.

The penalty, said Selole, is 10% of a person’s annual income or R1-million, depending on which is the larger amount.

In a letter to clients published on 21 July, Up Money said FNB had frozen their accounts “without explanation” and was “trampling” on their clients’ right to dignity.

“The freedom that many have fought for, and died for, is unfortunately enjoyed by our oppressors who continue to, without recourse, keep us under their thumb and do with us as they please,” wrote CEO Matsimela.

“Let us together take FNB to task and ask them not only to bring back our monies, but to begin recognizing us as equal citizens who deserve respect like all other citizens of South Africa.” DM