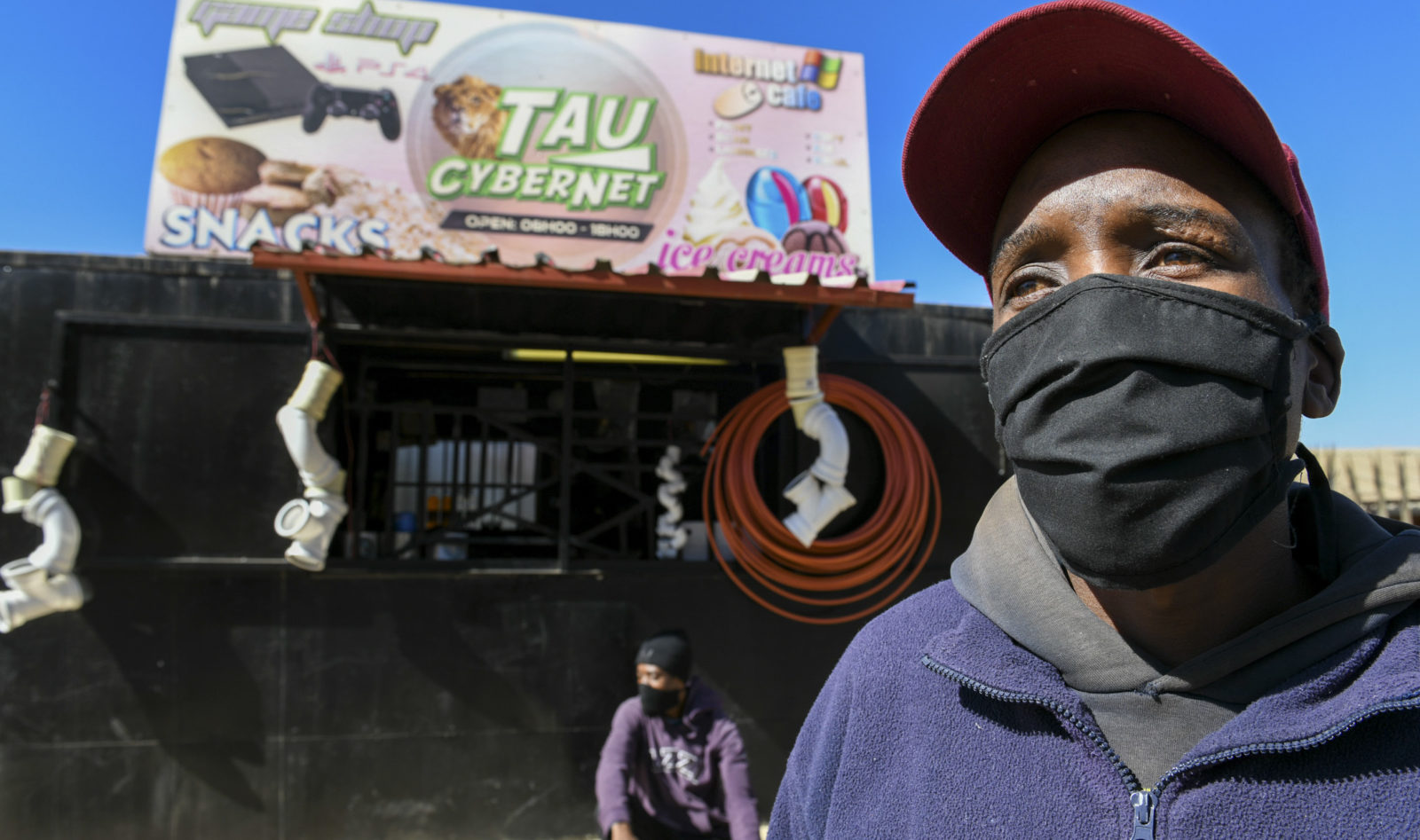 Mbuyiseno Sinqotho owns the Tau Cybernet store in Meadowlands, Soweto. Despite limiting the number of shoppers in these closed enviroments it is believed that confined public areas are contrbuting to the spread of the Corona virus. Meadowlands is one of the emerging hot spots for the Corona virus pandemic in Soweto.150720. (Photo: Chris Collingridge)

The pandemic offers us an opportunity to rebuild a better South Africa, but it won’t happen without real debate about the kind of infrastructure we need, to serve which industries and communities, at what price and with what quality.

When it comes to dealing with the economic disaster of Covid-19, most observers seem happy to reiterate proposals they’ve cherished for years. It would be more practical, however, to start by asking how the pandemic has changed South Africa and the world. After all, if your house burns down, you don’t begin by designing your new kitchen. Instead, you figure out where you’ll spend the night and think about how to rebuild, and only then move on to researching countertops.

Covid-19’s phased impact constrains the scope for reconstruction. In the short run, say through the middle of 2021, the contagion itself will severely limit economic and social activity at home and abroad, as individuals and public health regulations seek to contain infections. But even after the pandemic is tamed, the economy won’t just bounce back.

The South African Reserve Bank expects the GDP to shrink by an extraordinary 7.3% in 2020, and the International Monetary Fund forecasts a similar decline in the rest of the world outside of China (where 1% growth is predicted). Recovery will take at least two years.

In short, we can’t just return to December 2019 when the pandemic ends. We will still have to deal with slashed household incomes due to joblessness and pay cuts, especially in working-class communities; the closure of many small businesses, while most of the survivors face deep liquidity constraints; downsizing or even liquidation for some major companies that were troubled even before the pandemic (among them, Sasol, ArcelorMittal South Africa, Edgars, Massmart, SAA); a 30% cut in municipal revenues; a prolonged depression in domestic and international travel, tourism and restaurants; tight fiscal constraints on national government; depressed global commodity prices, and highly volatile international capital flows.

The phases in the pandemic affect the scope of reconstruction efforts. As long as the contagion rages, we need measures that bolster economic growth without escalating transmission. Opening up too fast has already caused immense economic damage, and we can’t afford to keep repeating that mistake. After the contagion is controlled, bigger strategies are required to fast-track recovery while laying the foundations for a more equitable and dynamic economy.

Four strategies could help in the short run.

First, the pandemic in itself disrupts production. We need learning systems that can continually improve measures to prevent infections in and around workplaces. For instance, government could support industry forums to analyse clusters and identify ways to prevent them. It could also improve information for workers. Often employees insist on closing workplaces temporarily after cases emerge, which is far less helpful than wearing a mask, maintaining distance from co-workers, and ensuring effective tracing and quarantine.

For their part, employers often make people with symptoms or exposure return to work until they get their test results. Delaying quarantine saves money up front, but risks far higher costs if it leads to a workplace outbreak. Moreover, employers often don’t help workers to enter quarantine centres or provide transport so that they can avoid the high risk of taking taxis.

Second, the pandemic itself increases demand for some products, most obviously personal protective equipment and healthcare inputs. To reduce crowding in public transport, the government could also promote affordable, safer transport on a mass scale through light motorcycles, e-bikes and tuktuks.

E-commerce and streaming also offer opportunities for meeting needs while reducing transmission. But their expansion has to overcome three core challenges.

Second, many delivery services don’t serve townships or informal settlements, which in itself provides an opening for small local business. For instance, spaza shops could act as nodal points for payment and delivery. In several townships, entrepreneurs have already set up delivery agencies for their communities. New platforms should encourage a decentralised network.

Finally, the dominant e-commerce and streaming systems do not provide space for small South African producers. In contrast, in China Ali Baba started off precisely to give smaller businesses access to national and international markets. Obviously it is harder to serve a host of small suppliers, many of which need help to use e-commerce platforms and for delivery and payments. Once established, however, a national platform would facilitate local procurement as well as strengthening competition.

Additional opportunities arise from the disruption in global trade and financial flows. The depreciation of the rand and shortfalls in imports open up space for local producers of both intermediate and consumer goods. Government could help by working with business to fast-track a review of emerging opportunities. New e-commerce platforms for local producers would assist in marketing the new goods and services.

Third, financial support for households affected by job and income losses during the downturn is crucial to sustain overall demand as well as to minimise hardship. The Unemployment Insurance Fund’s (UIF’s) Covid-19 temporary employee relief scheme (TERS) programme has been essential, but is scheduled to end in mid-August. After that, many businesses plan to retrench, and it will be critical that the UIF’s normal programmes respond efficiently. In addition, the adjustment budget allocated R19-billion for initiatives to establish community-based employment stimulus programmes on a mass scale. It should be implemented as soon as possible. Participants can promote behavioural changes needed to stop transmission, as well as helping to get relief to poor households and vulnerable individuals.

Finally, all the spheres of government face a sharp fall in revenues while facing increased demands. Funding the recovery therefore requires innovative measures to redirect domestic savings, based on the model of the TERS programme. Among others, the holiday on the skills levy could be extended at least until the end of the financial year, since the National Skills Fund can draw on its substantial surplus.

In addition, we need new investment vehicles, for instance a dedicated recovery bond, to enable retirement funds and other financial savings institutions to contribute. As with war bonds in World War II, the premise is that lower financial returns would be more than offset by accelerated economic recovery and social cohesion. Finally, a progressive solidarity tax should be introduced, ideally levied on assets rather than income.

Obviously, redirecting resources towards new uses means reducing spending in other areas and taking on new risks. Some groups will inevitably object. For instance, the UIF’s financial managers opposed investing its surplus in relief programmes, at least in part because it cuts into their fees. But there’s no avoiding the pain from the Covid-19 crisis. The only way forward is to alleviate it where possible, while laying the basis for shared prosperity in the long run.

After the pandemic is contained, a reconstruction programme has to address dependency on mining exports and unusually deep socioeconomic inequalities, which have long stood in the way of dynamic and inclusive growth. The reliance on mining means that South Africa’s GDP growth parallels the global commodity cycle, with the slowdown from 2011 largely driven by the end of the international bubble in metals and energy prices.

Inequality slows growth by fuelling contestation over policies and ownership as well as depressing demand. It arises from concentrated ownership combined with persistent disparities in education and municipal services. Moreover, wages in South Africa remain unusually unequal by international standards, largely because workplace organisation has not changed much since apartheid.

Reconstruction also cannot ignore the climate crisis, which has already undermined economic growth through repeated droughts and the limits on the coal economy. Agriculture and tourism already suffer from regular dry spells. Moreover, South Africa remains around seven times as dependent on coal as other developing economies excluding China. Eskom’s inability to adopt new renewable technologies has contributed to the unreliability and high cost of electricity.

These realities all mean we can’t just repeat the mantra of infrastructure investment. We need, instead, a real debate about what kind of infrastructure we need, to serve which industries and communities, at what price and with what quality. It makes a huge difference for the economy and society if we invest to build township enterprises or irrigation schemes for small farmers, expand bulk ore lines for mines in the Northern Cape – or spend a fortune on a new nuclear power plant.

And infrastructure investment is not enough in itself. South Africa’s future depends on improving educational outcomes for the majority of learners; finding sustainable opportunities for diversifying away from mining dependency; and ending rent-seeking in upstream production, especially in iron ore and steel, soya and maize, polymers, coal and electricity.

Like any disaster, the pandemic offers a chance to rebuild better. But we need to be clear about the extent of the devastation, and we can’t just turn back the clock. We need innovative solutions that fit the new world we have entered, while overcoming the systems that propped up unfair and inadequate outcomes even before the pandemic hit. DM/MC

Saul Levin is executive director of Trade and Industrial Policy Strategies (TIPS). Neva Makgetla is a senior economist at TIPS.