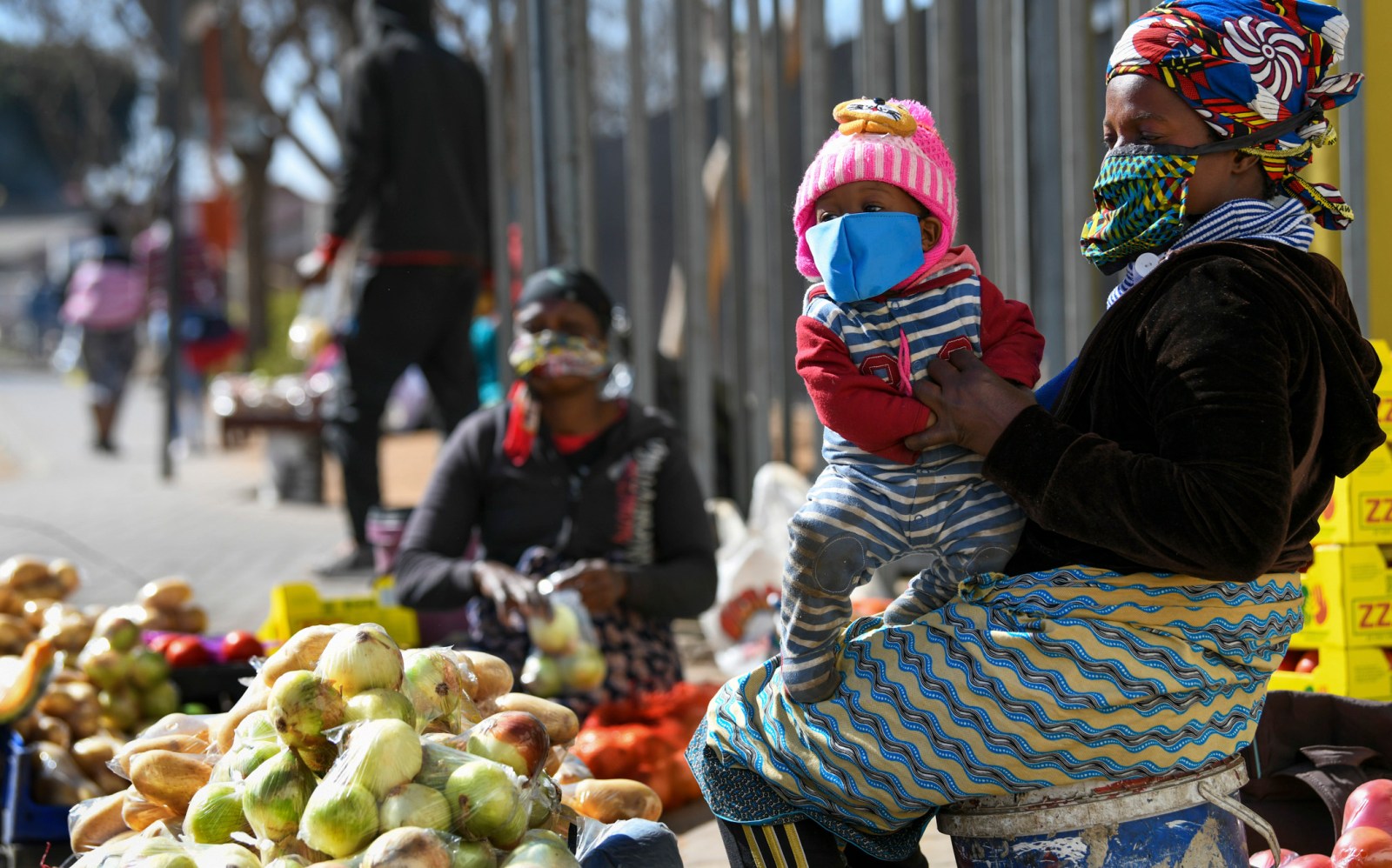 In an attempt to limit infection, hawkers are often tasked by parents to look after children when parents enter the Ndofaya Mall, Meadowlands, Soweto. Despite limiting the number of shoppers in these closed enviroments it is believed that confined public areas are contrbuting to the spread of the Corona virus. Meadowlands is one of the emerging hot spots for the Corona virus pandemic in Soweto.150720. (Photo: Chris Collingridge)

The Covid-19 pandemic has sparked unprecedented health and economic crises, and exposed the vulnerabilities of those who earn a living in the informal economy. The lockdown in South Africa has come at a huge economic cost to many street vendors and domestic workers, who additionally face the criminalisation of their activities or employers who don’t comply with labour law.

On Friday, 31 July 2020, the third webinar in the series of Solidarity Webinars – organised jointly by Maverick Citizen, Lawyers for Human Rights, Liliesleaf Farm and the Rosa Luxemburg Foundation – to look at issues of migration in the context of the Covid-19 crisis took place.

The webinar brought together members of civil society to discuss the significant and often unlawful challenges that informal workers continue to face in South Africa.

The informal economy is a conglomerate of informal workers and informal units that contribute to the entire economy. The general public does not have a high level of awareness about this sector, although it contributes significantly to job creation and the alleviation of poverty.

Statistics South Africa defines informal workers as own-account or self-employed workers who are not registered for value-added tax (VAT) or income tax; or as waged workers whose employer does not provide at least two of the following:

Domestic workers and street vendors fall into the category of informal workers.

The challenges of being an informal worker

Jane Barrett, director of Women in Informal Employment: Globalising and Organising (WIEGO), says that informal workers in South Africa constitute about 30% of the workforce. They face unprecedented challenges and are subject to several vulnerabilities, such as:

Barrett explains that in the wake of the Covid-19 pandemic, informal workers have been disproportionately impacted.

According to the National Income Dynamics Study – Coronavirus Rapid Mobile Survey (NIDS-CRAM) report, 31% of informal workers who did not lose their livelihoods completely were “locked out” of employment in April 2020, compared to 26% of those in formal employment, while 37% of informal self-employed reported zero earnings in April 2020.

Barrett recently spoke to a street vendor in Johannesburg, who said she was taking home around R500 per week before lockdown and now earns about R100 a week, before deducting her transport costs.

“During the lockdown, the situation has been even worse for domestic workers. They are struggling a lot because of unpaid leave. Employers are not forced to pay them during lockdown.” Because it is not the responsibility of employees to register themselves at the labour department and their employers have not done so, many are unable to claim from the Temporary Employee Relief Scheme [TERS] or UIF,” says Mthombeni.

“We keep calling the department and have sent several follow-up emails, but they never get back to us. They keep saying ‘call tomorrow several times to find out what the correct process is’ and each time they give us a different story. Some tell us to go online and when you do, it says that only employers can claim. You cannot see where employees can claim.

“So those who are registered never claim from the TERS because it is very difficult for us. Domestic workers are not treated the same as other workers.”

Mthombeni says that domestic workers who continue to work are treated poorly. “There is no leave, no overtime and no weekends because they are told by their employers that if they go, they must go forever because they will bring [back] the Covid-19 virus.”

Mthombeni says she has seen instances where domestics who are required to stay with their employers end up working more than their required hours and are not paid overtime.

“Employers tell their domestics that they are using their electricity and water, and are not paying rent, so they don’t get paid overtime. They are working like slaves and the government cannot even see that it is happening.”

Regarding domestic workers who have been unable to work or lost their jobs during the lockdown, Mthombeni says that some employers have offered no severance packages or financial help.

“Domestics are not even offered food. There have been instances where they have asked their employers for maize meal and salt because other foods are a luxury.

“It is very painful for a domestic worker who has worked for a family for years and the employer during lockdown cannot appreciate the work they have done. Some employers do not follow the right procedure for dismissing their domestics, they just send them a WhatsApp saying that they are not needed anymore.”

Mthombeni says that domestics have tried educating their employers about their rights as workers beyond employment, but with no success.

“When you call the employer to ask them about the retrenchment process and severance package, they say they do not know what that is. They simply say, ‘She is a domestic worker, we do not have a contract.’”

Mthombeni is pleading with the Department of Labour and government to step in to educate employers about the rights of domestic workers, and the procedure of hiring, dismissing and retrenching them.

“The department needs to have a domestic worker employers guide, even if it is just a flyer, to show them what they need to be doing for their employees.”

Mthombeni adds that there are still employers who pay their domestic workers unlawfully low salaries and government has not clamped down on them.

“My question to the government is this: What are you doing about employers who are not following the law? Some domestics are still earning R2,000 a month. Only the CCMA is helping some domestics, but the Department of Labour is non-existent in the domestic worker sector.”

In order to combat the injustices that the informal sector faces, 10 informal worker organisations rallied together and issued a statement of demands to the Department of Labour, the Nedlac response task team, municipal workers, and business and community forums (where appropriate).

Rosheda Muller, president of the South African Informal Traders Alliance (SAITA) has been leading the process of formulating the demands, which include the following:

Subsequently, different sectors of informal workers issued other demands. For example, street and market vendors requested a “do no harm” policy for police to stop harassing and illegally evicting traders – a prominent and ongoing problem.

Thandeka Chauke from Lawyers for Human Rights says that the organisation has noticed that informal workers are often “disparaged and despised by law enforcement if not outright criminalised, and this culminates in persistent harassment and the continuing and unlawful impoundment of street vendors’ trade goods”.

Alana Potter, director of research and advocacy at the Socio-Economic Institute for South Africa says local government is crucial in providing a “supportive and facilitative regulatory and policy environment for informal trade, which is regulated through by-laws and municipal policies”.

“At this point, most of our interventions have been based on strategic litigations and advocacy with a focus on turning laws and policies into a shield for informal workers,” says Chauke.

Despite all the efforts by civil society, the government needs to step in and enforce tighter regulations, and policies that protect informal workers. DM/MC