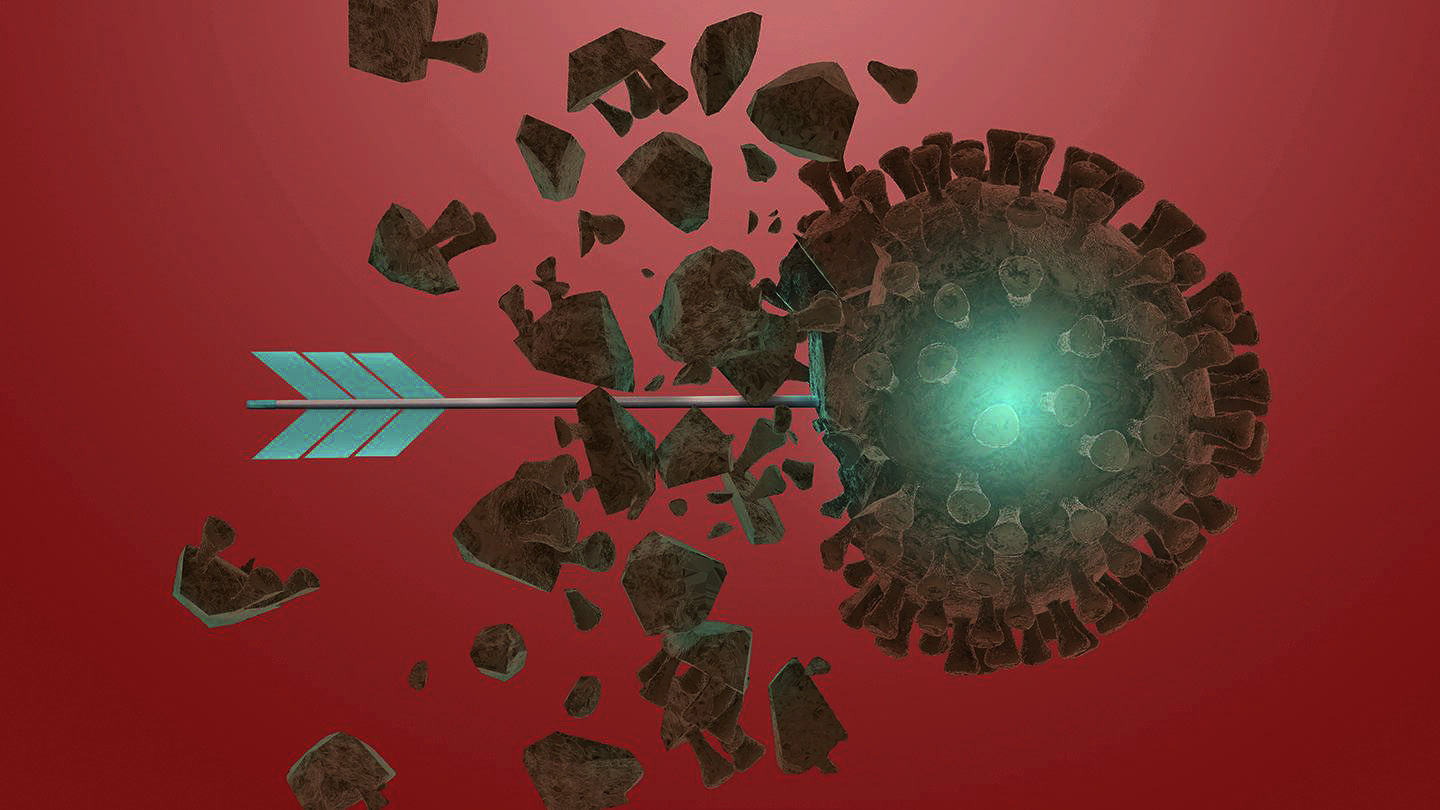 Rushed research in the time of pandemic panic has led to questionable research and conspiracy theories about the origin of the virus – but genetic analysis of the virus has shown that it is highly unlikely that it originated in a lab.

With the entry of SARS-CoV-2 – the virus responsible for Covid-19 – into the human population and the rapid spread of the pandemic, the general public as well as the medical and broader scientific communities have been bombarded by an extraordinary number of articles in scientific journals and on pre-publication servers, as well as in popular media, including social media. This has led to a change in publication norms, with expedited publications reaching the public within days of receipt and preprint servers being close to overwhelmed.

While this has allowed for worldwide dissemination and research efficiency on an unprecedented scale, it is no surprise that some questionable research has slipped through. As shown in the past, a single “bad” paper can overshadow many more legitimate ones. To combat this, many preprint servers and publishers now have filters – but is it too little, too late?

Many conspiracy theories regarding the origins of SARS-CoV-2 have taken hold, partly due to the propagation of these theories by respected professionals in both the scientific and medical fields.

We are aiming with this article to debunk some common misconceptions and misrepresentation by summarising peer-reviewed, credible research showing that this novel virus has a “natural” origin and the unfortunate ability to spread further and faster than previous coronaviruses.

A major contributor to the manufacture theory was the presence of supposedly “unnatural” DNA sequences in the novel coronavirus genome. This theory first came about in a preprint in January 2020, where the authors claimed to have found striking similarities between the novel virus’s spike glycoprotein and two HIV proteins, gp120 and Gag. The research was retracted less than a week later, due to the input and comments from peers that pointed out that the methods used were rushed and incomplete, and that the conclusions drawn were, at best, coincidence.

Furthermore, a comment published less than a week later thoroughly debunked every conclusion drawn by the preprint by showing how the original bioinformatics analysis was flawed.

Despite the retraction, and the evidence against the link to HIV, this question was thrown into the spotlight again by French Nobel Prize winner, Luc Montagnier, in an interview in April 2020. Claims were made that the virus was created during HIV vaccine research in Wuhan. Some people, including some scientists, used these claims to support the theory that an artificial coronavirus escaped from the Wuhan laboratory, either accidentally or by purposeful release. However, if this were the true source of SARS-CoV-2, evidence would have been found in the viral genome, since several reverse-genetic systems are already available and commonly used for betacoronaviruses, such as SARS-CoV-2. No such evidence has been found by any of the teams that conducted whole genome sequencing on various samples from the outbreak.

Another theory suggests the escape of a “natural” laboratory virus. On the face of it this may seem plausible, especially given past incidences of SARS-CoV viruses that escaped from laboratories that work with virus culture. There have been incidents of SARS-CoV-1 infection occurring in laboratories: in Singapore, in Taiwan, and two cases in China, leading to three generations of infections due to human-to-human transmission outside the laboratory. All three incidents involved SARS-CoV-1 strains from samples being used in these laboratories.

A second point brought up by some in the medical profession is that the novel virus must be human-made, as it should not be spreading so rapidly across the world. “Human” coronaviruses HCoV-OC43, HCoV-229E, HCoV-HKU1 and HCoV-NL63 are indeed seasonal. They have circulated in human populations for at least decades, if not centuries, and may have originated from an animal source originally. (Interestingly, HCoV-HKU1 and HCoV-NL63, despite having been present for decades, were discovered only after 2003 due to much increased research interest in human coronaviruses).

While the current Covid-19 outbreak began and spread during the northern hemisphere winter months, it has continued to spread during the northern hemisphere spring and summer and also in warm climatic zones such as Brazil. While virus stability may be impaired by higher temperatures, the infection pressure during an outbreak and the fully susceptible population are likely to overcome this impediment.

Last, many researchers and clinicians fear that this novel virus spreads too rapidly to be a natural coronavirus. While it is indeed spreading faster than SARS-CoV and MERS-CoV, possible reasons have been found in its ribonucleic acid (RNA). SARS-CoV-2 has distinct mutations in its spike protein, specifically the receptor binding domain (RBD).

The RBD gene is the most variable part of the coronavirus genome and mutations here can affect how well the virus can enter cells. Some argue that this is a reason to believe it was purposefully inserted; however, the backbone sequence of the virus does not support the genetic manipulation theory. Other mutations in this region give more credit to zoonotic transfer events, as will be explained next.

In a sense, the occurrence of this pandemic had been forewarned by the scientific community. Highlighted here are just four of many articles that were written before the discovery of SARS-CoV-2: in September 2019, January 2019 and October 2007, and strikingly, a report written in the wake of the SARS epidemic in 2003. All suggest that future coronavirus outbreaks are likely to originate from bats or exotic animals, specifically in China. The picture painted by literature since the start of the pandemic shows how these predictions have come true.

Comparisons of the genomes of the novel coronavirus SARS-CoV-2 with SARS-CoV, MERS-CoV and a large assortment of other coronaviruses, including many SARS-like coronaviruses found in bats, have been made in multiple publications by unrelated author groups. Genetic comparison found that the novel virus is less closely related to MERS-CoV (~50%) than to SARS-CoV (~79%). Phylogenetic analysis placed SARS-CoV-2 in the genus Betacoronavirus, subgenus Sarbecovirus and showed that it formed a distinct clade within the species Severe acute respiratory syndrome-related coronavirus; it was subsequently named SARS-CoV-2 following established naming practices.

Evolutionary analysis in early 2020 found that the closest relative of SARS-CoV-2 was a previously isolated bat coronavirus (RaTG13) from China (96% sequence homology). More recently, another coronavirus (RmYN02) isolated from bats that were collected in China in 2019 was shown to share 97% identity in the lab gene. While it is not the exact variant that caused the outbreak, it shows that the progenitor of SARS-CoV-2 probably originated in bats. Transfer events such as these have been shown before.

The major differences between SARS-CoV-2 and other SARS-like viruses were seen in the spike protein, where the previously mentioned mutations were found. Of six key residues in the receptor binding domain, five were different in SARS-CoV-2 when compared to SARS-CoV-1. Interestingly, these six residues are identical to those found in a pangolin coronavirus.

The second set of mutations was the insertion of amino acids between the two subunits of the spike protein. Previous research suggests that this would allow bat viruses to infect human cells. The closely related bat-derived coronavirus, RmYN02, also has amino acid inserts between the spike protein subunits, providing strong evidence that these events often occur naturally. These discoveries further discredit the idea that mutations in the SARS-CoV-2 genome were introduced in a laboratory and led to an unusual question: were pangolins the intermediate host for SARS-CoV-2?

At first, this may sound like a far-fetched theory; however, scientific evidence suggests it may be possible. Malayan pangolins illegally imported into China were found to contain coronaviruses up to 91% similar to SARS-CoV. Human-pangolin contact could have arisen by many means, as pangolin meat is considered a delicacy and the scales have been reportedly used in Chinese traditional medicine.

This, together with the discovery of the six key mutation changes in the RBD receptor supports the possibility of pangolins as the intermediate animal host. More important, even without considering pangolins as an intermediate host, this proves that the mutations found in SARS-CoV-2 could occur naturally.

There is still the issue of exactly how and where the virus transferred between animals and humans. Unfortunately, the likely period of undetected human-to-human transmission and the lack of animal and environmental samples at the proposed origin site in Wuhan make this a difficult task that is expected to remain unsolved.

While the manufacture theory deserved investigation, genetic analysis of the virus has shown that this is highly unlikely. Scientific evidence supports the Mother Nature theory, namely that SARS-CoV-2 most likely originated through zoonotic means either by direct contact, e.g. of bats with humans, or via an intermediate host. This was likely followed by a period of undetected human-to-human transmission, during which the virus could mutate and spread rapidly enough to trigger detection by medical authorities once a number of cases of severe disease arose.

Given the growing evidence showing that a significant proportion of people infected with SARS-CoV-2 remain asymptomatic, it is entirely plausible that there was a period of sustained, undetected human transmission following the first zoonotic transfer.

With such a large reservoir of animals untested, we may never find the true progenitor of SARS-CoV-2. However, the mutations it contains, and their similarities to those found in animal coronaviruses, such as bats and pangolins, certainly show that it is possible for the virus to adapt by natural selection to infect any species.

Given that this has been known since 2003, yet a spill-over was allowed to happen again (this time, with much worse consequences), one might just wonder whether humankind is clever enough to learn the lesson this time. Mother Nature will always find a way, particularly if humans choose to interact irresponsibly with the rest of the natural world. DM/MC