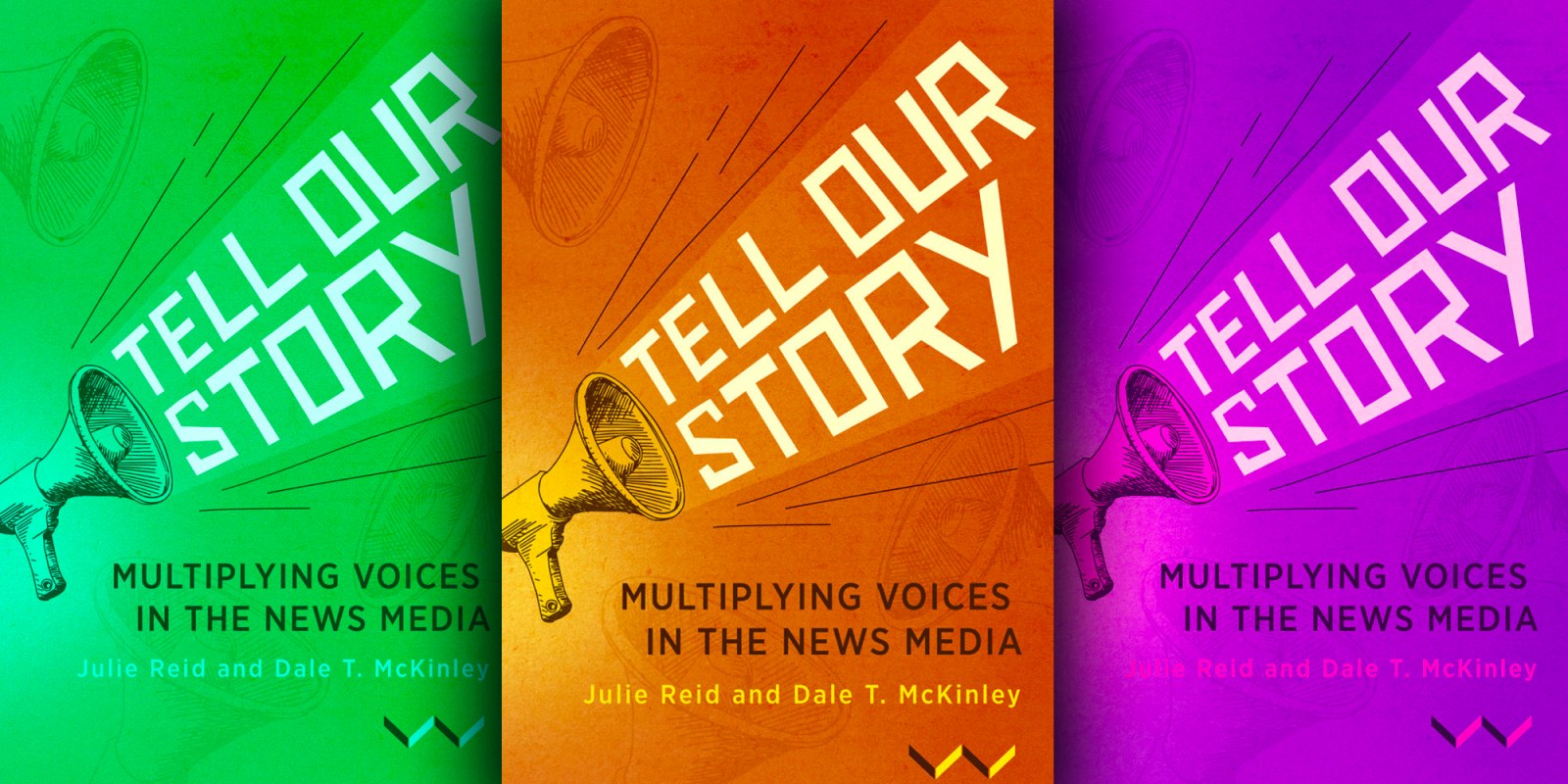 ‘Tell Our Story’ is a book written by Dale T McKinley, a research and education officer at the International Research and Information Group, and Julie Reid, an associate professor of communications at Unisa. The authors make a commentary on the use of voice in media, and show whose voices are elevated and dominant in society and specifically the media, as well as which voices are ignored or relegated to the margins as a result of media outlook.

Tell Our Story follows what the authors refer to as an “audience-centred approach” to their research, which they say “centres its efforts on a respect for the dignity of voice(s)”.

This take is informed by a departure that asserts that the media exists as a result of voices and it is therefore key that these voices do not centralise themselves when reporting.

McKinley and Reid also discuss what they refer to as “dominant media”, which are regarded as those owned by private or state corporations and are the ones that set the narrative through which stories are told.

They show that reporting by journalists is often more accurate and nuanced when done by a journalist based in a specific community or has background context to a community and people. For example, reporting on KwaZulu-Natal would be better done by a journalist who is from and understands the people and society. The authors highlight that often failure to pick up on impending crises stems from not understanding precipitating community contexts.

The first part of the book looks at the representation of voices on the ground, as shown in the case studies of Glebelands Hostel, and the Xolobeni/Amadiba and Thembelihle communities. The authors attempt to retell the stories of the communities using the audience-centred approach. In doing this they name eight key things to keep in mind during coverage:

The Glebelands Hostel is in Umlazi, an ANC stronghold, has long been the setting for political violence. However, reporting on the conditions at the hostel really only started around 2014 when an estimated 120 people at the hostel were killed by hitmen. It seems most media were too scared to enter the hostel because of its violent reputation, yet never sought to understand its genesis. The residents interviewed also pointed to some instances of incorrect reporting by dominant media regarding the true state of the hostel as well as incidents of political meddling, resulting in the silencing of their voices.

The Amadiba Crisis Committee (ACC) in Xolobeni has for years been fighting mining companies and the construction of the N2 toll road without proper consultation with their community.

According to the ACC spokesperson, the popularly peddled narrative in the media is that of an unnecessarily obstinate community resistant to development. Yet, when listening to the insider perspective without preconceived ideas of the community’s issues, a different story emerges, which is that of a people who want consultation over their destiny and land and a maintenance of cohesion.

The ACC says many journalists pitch up in Xolobeni with preconceived notions of the community and do not take the time to fully understand the background of their resistance.

Thembelihle is an informal settlement in Lenasia that was established with the consent of the government, who even provided building materials. The state has since reneged on its agreement for the community to settle on the land and to provide services. The community has been resisting relocation and organised themselves through the Thembelihle Crisis Committee.

The community says that the dominant media has reflected them and their struggle in a “negative and disrespectful light” and they attribute much of this to the media not coming into the community to speak to residents in order to get a more accurate reflection of what is happening.

These case studies reveal the effect of media reporting according to the agenda of media corporations, thereby relegating community voices to the margins. The dominant media is therefore seen as reactionary and not prone to sustained, in-depth coverage on stories about the marginalised.

In the second part of the book, the authors unpack the characteristics, objectives and impact of what they refer to as the outside or dominant voice of the media. This voice is said to be about protecting the socio-economic and political interests of the state and the ruling class and gives little airtime to the voice and opinions of the poor.

A chapter I found particularly apt at explaining this further is Chapter 7, The Political Economy of Dominant Power and Storytelling. It starts with a Marx and Engels quote: “The ideas of the ruling class are in every epoch the ruling ideas, i.e. the class which is the ruling material force of society, is at the same time its ruling intellectual force. The class which has the means of material production at its disposal, has control at the same time over the means of mental production, so that thereby, generally speaking, the ideas of those who lack the means of mental production are subject to it. ”

The quote establishes that an imperative of dominance is to create a hegemonic societal subscription through things like education and media so as not to necessitate the constant use of force. This allows the ruling class to marginalise voices they find threatening to their continued rule. An example of this is the case of the Amadiba, where the community is characterised as unreasonable and resistant to employment opportunities in order for mining houses and the state to paint themselves as though they are in fact saviours as opposed to threatening the way of life of the Amadiba. Similarly, the protest incidents at Thembelihle as a result of the failure of the state to provide services and infrastructure are portrayed as unruly and violent by the dominant media without seeking to understand the reason for the protests.

The final part of the book explores the possibility of new trajectories for both journalism and voices. The authors say the media is currently facing a credibility crisis, particularly with the advent of the proliferation of fake news and its politically destabilising effect on society – think Bell Pottinger.

This has had the effect of allowing those with political agendas to broadly paint unflattering news as “fake news”. This is why the authors say a diversity of media sources and reporting is necessary for the audience to be able to distinguish for themselves fact from fiction. Audiences need a wider array of voices speaking on different topics, but from informed contexts and not only the voices of those in economic and or political power.

The authors also discuss the concept of “planting the seeds of change” using “listening research” and being a “listening journalist”. What I understand them to be saying here is that in moulding the future generation of journalists, it is important to instil an appreciation of the often unheard or marginalised voices as having value. This ensures that a diversity of experiences and perspectives is put forward. There needs to be a deeper questioning 0f the voices that consistently appear to be the most heard and how they drown out other voices, even on matters they may not be authorities on.

The book pushes journalists and audiences to interrogate whose voices we choose to elevate while consuming and/or reporting the news and to what end. DM/MC