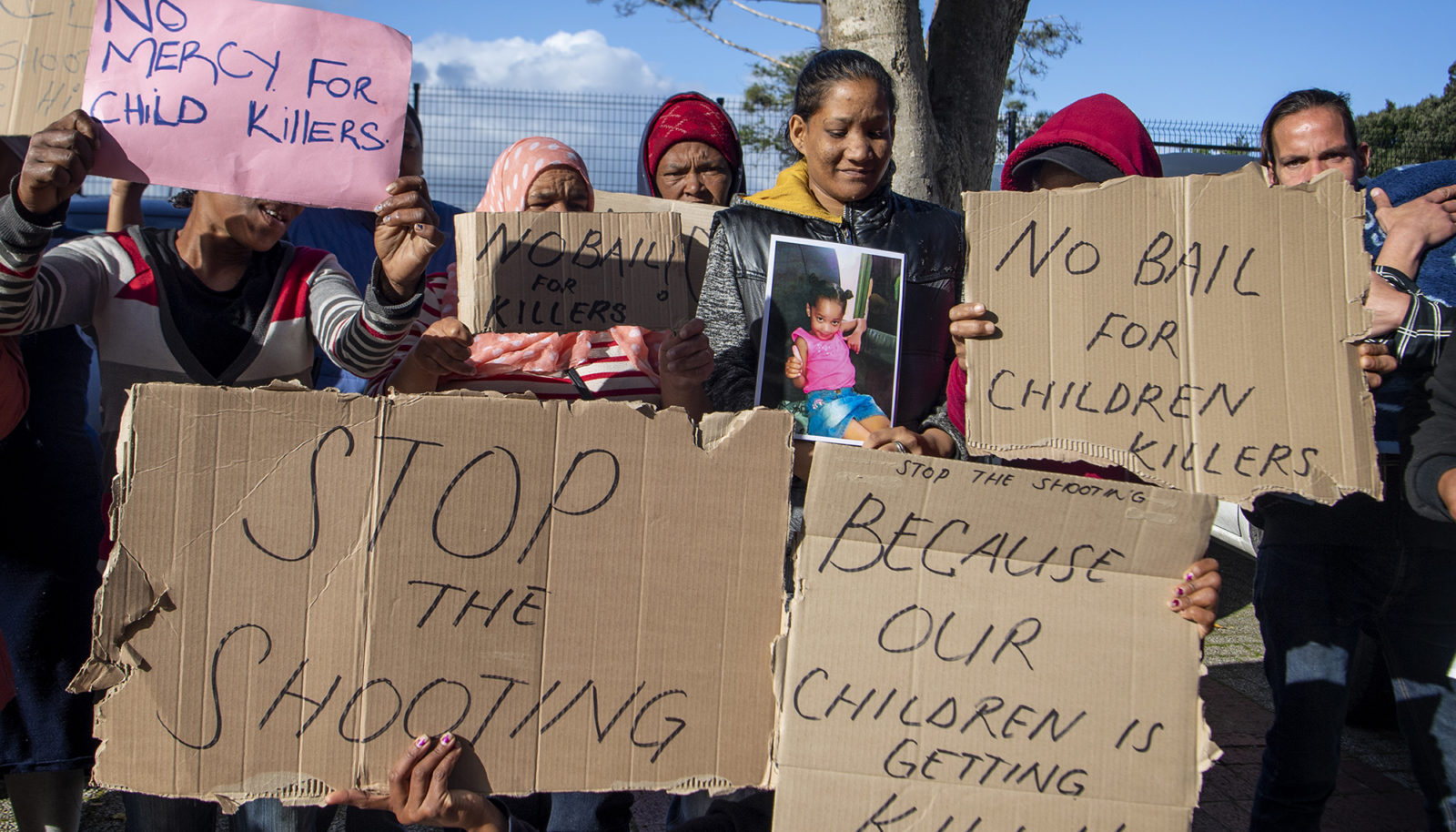 Lavender Hill residents protest outside the Wynberg Magistrate’s Court during the appearance of two men accused of killing six-year-old Nathalia Pienaar in a gang-related shooting on 28 August 2019 in Cape Town. (Photo by Gallo Images / Netwerk24/Jaco Marais)

Despite transformation, the SAPS remains unresponsive to the major crime concerns of the majority of South Africans.

Each year the SAPS releases its annual crime report at roughly this time. This is supposed to reflect the progress that it is making in addressing crime. The picture presented in the report for 2019-20, released on Friday, is far from reassuring. For the eighth consecutive year, the number of recorded murders increased. Notwithstanding recorded decreases in aggravated assault and attempted murder, increases were also recorded in other categories of serious violent crime including sexual offences and aggravated robbery.

When these statistics are released, media reporting typically focuses on the detail of the statistics generally, focusing on crimes such as murder, rape and hijacking, the areas with the highest number of recorded violent crimes, or data about crime against and involving children.

There are, however, certain established features of the information that is presented that are never questioned or interrogated.

Vigilante related killings are reported to be the third-largest category (1,202), with robbery only fourth (1,061), a number not substantially higher than that for gang-related murders (1,023).

A note at the bottom of the page indicates that some incidents are not included. But what is not explained here is that the SAPS has little or no information on the circumstances in which many murders take place. In this year’s crime report it indeed appears that 55% of murders took place in circumstances that are unknown.

A 2008 study on murder in six areas with high rates of murder examined this issue. Data collected in the study included data on argument-type murders, robbery-type murders, murders in unknown circumstances, and others. Very similarly to the current SAPS statistics, this study found that a full 53% of murders took place in circumstances that were unknown or unclear.

The study, however, took this analysis a step further. While the motive or circumstances of this 53% of murder were unknown, it was nevertheless possible in many cases to identify other details about the circumstances in which these murders took place.

The study therefore concluded that robbery related murders “may account for a number of murders which is equal to or greater than the proportion of murders linked to arguments”. In other words, if murders in “unknown circumstances” were taken into account, it would be recognised that robbery makes a very substantial contribution to the total number of murders. Its contribution to the overall murder rate is likely to be comparable to that of interpersonal disputes.

The likelihood that this still applies to murders currently is reflected in the data on the location of murders on page 16 in the SAPS crime report. Unlike the data on circumstances of murder, which is only based on 45% of cases, the data on the location covers a full 82% (17,399) of the 21,325 murders. It is therefore likely to be reasonably representative. Of these cases, 56% (9,714) are said to have taken place in a “public place”.

The failure of the SAPS to recognise that robbery, and indeed street robbery, is a major contributor to levels of murder is linked to another problem.

Aggravated robbery is robbery where firearms or other dangerous weapons are used, or where grievous bodily harm is threatened or inflicted during the course of the robbery.

The vast majority of aggravated robberies are street robberies. Reports published by Stats SA in 2015, 2016, 2017, and 2018, all confirm that, along with crimes involving intruders inside their homes, street robbery is one of the three crimes that is feared most by South Africans. As the above discussion of murder makes clear, there is good cause for this. Most of the murders that are related to robberies are linked to street robberies.

But, as has been the pattern for the last 20 years, the SAPS gives minimal attention in its reports to street robbery. Instead it focuses its attention on six subcategories of aggravated robbery. Three of these, bank robbery, cash-in-transit heists, and truck hijacking, are crimes that have an impact on the organised business sector. Collectively, in 2019-20, they account for 1,366 cases, or less than 1% of the total number of 143,990 aggravated robbery cases.

The reason why they are prioritised is this. In the 1990s South Africa’s middle classes (predominantly whites) started to become more exposed to the crimes that had previously primarily plagued township residents. Due to the disproportionate impact of the middle class in shaping public discourse, crime came to be increasingly recognised as a key public concern.

The crimes that these groups, along with organised business, were most concerned about, were three crimes that were impacting on them heavily and also had a high level of fear associated with them due to the use or threat of violence associated with them. These crimes were residential robbery, car hijacking and business robbery, the crimes now known as the trio crimes. By some combination of middle-class myopia and sleight of hand these crimes came to be labelled as “the crimes most feared by South Africans”. This provided the justification for treating them as national priority crimes notwithstanding the fact that there is no substance to this idea.

The prioritisation of trio crimes has been an entrenched feature of criminal justice policy in South Africa for the last 20 years despite the fact that their status as priority crimes originates in a myth.

It may be noted that there are other explanations that are sometimes provided for the prioritisation of the trio crimes. A SAPS lieutenant-general once told me that the reason why the trio crimes are prioritised is that they are linked to organised crime. But this is demonstrably not true unless any random informal groups of young men can be regarded as a manifestation of organised crime.

It is indeed true that many of the more sophisticated robbery groups that carry out trio crimes in the more affluent suburbs and shopping centres are frequently linked to crime syndicates.

But as the latest SAPS crime report demonstrates, the areas most affected by the trio crimes are not the affluent suburbs but the same areas that are most heavily affected by aggravated robbery more generally. The practitioners of the trio crimes in these areas are not hijacking or other trio crime specialists, like those who target more affluent South Africans. Instead, the vast majority of them are opportunistic aggravated robbery generalists. In the areas in which they operate there is little difference between holding people up at knife or gunpoint in their homes or on the streets.

The fact that the SAPS and the government are not accurately analysing the crime situation in South Africa is cause for considerable concern. The South African Police Service currently receives over R100-billion each year in public funds. It therefore has vast resources at its disposal including elaborate systems for collecting information. But what passes for analysis of this information is little more than the provision of rough data that is collated in terms of standards that are far from rigorous. In the absence of the capacity to interpret this information more effectively, police in South Africa are unlikely to be able to respond to crime in a meaningful way.

It may be expedient for Thabo Mbeki now to highlight the militarisation associated with the Zuma years. But this stagnation started during his presidency. It is then a reflection of a sustained failure not only of police leadership but of the governance of the police as well.

Some aspects of the legacy of militarisation remain, and police violence remains a chronic problem. But the greater crime is the failure to recognise and take seriously the major causes of insecurity facing the majority of South Africans. This is reflected in the fact that street robbery, one of the most feared crimes in South Africa, and a major driver of homicide, is still not recognised as a priority crime. DM

David Bruce is a Johannesburg based independent researcher and writer working in the fields of policing, crime and criminal justice. From 1996 to 2011 he worked in the Criminal Justice Programme at the Centre for the Study of Violence and Reconciliation (CSVR). He has a Masters in Management (Public and Development Management) from the School of Public and Development Management at the University of the Witwatersrand (2000). He has written extensively on policing issues including on questions of police reform, control of the use of force and police accountability and oversight.