The local government elections are our effective midterm elections.  Midterm elections are held halfway during the US president’s term, where the president is not on the ballot. The local government elections have tended to be the election where South Africans send a message to the ANC on a national level, and in the municipalities of eight of the nine provinces. It has also been an opportunity for Western Cape voters to send the DA a message to determine whether or not they are happy with their performance.

The 2016 local government elections saw the DA and the EFF bring the ANC under 50% in all but three Metros (eThekwini, Buffalo City and Mangaung). The ANC lost control of Tshwane, Johannesburg and Nelson Mandela Bay. The ANC also lost control of municipalities like Metsimaholo (Sasolburg), Thabazimbi, Modimolle-Mookgopong and Mogale City (Krugersdorp). It says much of the resilience of the ANC that a few years later, they are back in control of almost all of the above-mentioned municipalities.

Recently, Marianne Merten reported on the Secretary-General of the EFF, Marshall Dlamini stating the EFF’s willingness to work with the ANC to scrap the 2021 local government elections and move on with a single election:

“We are calling for a postponement of the local government elections to 2024 and it must be made permanent. We will make submissions to Parliament regarding this.”

This would mean that the national, provincial and local government elections would all happen on the same day. I could make an impassioned argument as to why lumping all our elections into one single election is a bad idea for our democracy, and a bad idea for citizens, but I would rather focus on why this is specifically a poor idea for the EFF.

Every major party must have a reluctance to contest the 2021 local government elections. Draft budgets must be getting chopped and slashed on a regular basis as Covid-19 endures. The EFF’s concerns about their ability to contest these elections with the desired budget is no doubt understood.

Despite the financial albatross around the EFF and other parties’ necks, it would be advisable for the EFF to reconsider this position.

Despite voter’s misgivings about the way the Eastern Cape is run, the coattail effect aids the ANC and weakens the opposition on the provincial ballot. This hypothesis would suggest that the ANC on a local government level would have a residual advantage as well in a single election, as the party further down the ballot derives benefit from all three tiers of government having their election on the same day.

No longer just a northern party

The EFF, followed by the Freedom Front Plus (FF+) were the major winners in the 2019 national elections. The EFF won an additional 19 seats and transformed itself from a “northern” party to a party which made serious inroads across the country, especially in KwaZulu-Natal.

The party currently has eight seats in eThekwini and if one had to use the 2019 results as an indicator of the EFF’s support in eThekwini, they would win 25 seats this time round. In Newcastle, the EFF would grow from five seats to 11 seats, and if they and the opposition parties could get the ANC under 50% in this steel town, they would have the best opportunity to don the mayoral chain as they finish ahead of the IFP and the DA.

The EFF also grew between 2016 and 2019. This is contrasted with the DA and the IFP, who went backwards. The EFF and the FF+ were on an upward trajectory, and performed better than they did in 2016.

Thus, if you had to replicate the 2019 provincial results in the municipalities and wards where the EFF historically performed the best in 2016 and in by-elections between the two elections, a fair assumption would be that the EFF would perform better in these areas, not worse.

In 2016, voters in 11 wards decided to elect an EFF ward councillor. With the EFF electing not to serve in any mayoral committee where the ANC received less than 50% of the seats, these 11 wards would be the showcase of how EFF ward councillors could better serve their residents, than the ANC or the DA could.

The party would also win an additional two wards from the ANC in by-elections, increasing the EFF’s tally to 13.

The bulk of these wards were in the North West, followed by Limpopo. 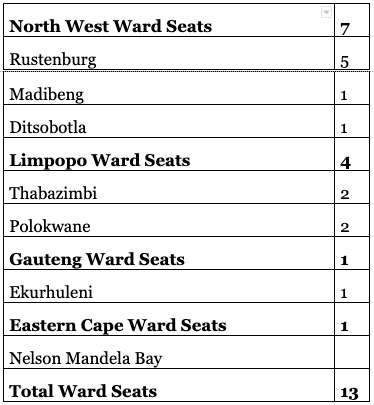 The EFF performed best in mining areas. It also has strong links to Seshego, Polokwane where Julius Malema hails from. The adopted heartland of the party are the wards around or near the mines of Rustenburg, Thabazimbi and Madibeng.

Below is a table showing how the EFF and the ANC performed in these wards when one considers the voting districts which make up the ward on the provincial ballot from 2019 versus the 2016 local government election result or in a more recent by-election in that ward.

* The ANC did not field a candidate in Ward 43 for the 2016 local government elections. (There is a good article for another time, on how much of the ANC’s 2016 Nelson Mandela woes are tied to Uitenhage and Kwa Nobuhle.) When one considers the proportional ballot in 2016 for Ward 43, the ANC got 64% and the EFF got 12%. This shows that the EFF did exhibit modest growth in the ward.

The 2019 elections saw the EFF make major strides in many regions across South Africa. These include the before-mentioned eThekwini and Newcastle, but also in far-flung places like Dikgatlong (Barkly West), in the Northern Cape and Mafikeng (Mahikeng), in the North West. In Gauteng municipalities like Rand West City (Randfontein), the party had impressive gains.

How does the EFF fare in the municipalities where they have the most ward councillors when comparing the 2016 results with the 2019 provincial results? They lose seats in all three municipalities. In municipalities like Rustenburg and Thabazimbi, there is a real possibility that if the 2021 local government elections were to take place, the ANC would not get over 50%, and the EFF would be best positioned to be the second-largest party and have the most legitimate claim of all opposition parties to the mayoral chain in those municipalities.

The single election would make this less likely.

Electorally, the EFF is on an upward trajectory. The local government elections in 2021 would be a very good opportunity for the party to continue with this trend, and show South Africans that it is the best alternative to the ANC, by bringing the ANC under 50% in municipalities across South Africa and in turn taking over the mayoral chain in municipalities where they emerge as the second-largest party. The data above suggests that the EFF is less likely to achieve this growth with a single election. DM